Rene “The Challenger” Catalan is rapidly rising up ONE Championship’s strawweight ranks.

The 39-year-old, who is a multi-time Wushu World Champion and the proud owner of Catalan Fighting Systems in Makati, Philippines, is riding a four-bout win streak in his mixed martial arts career, and could extend that to five next week.

On Friday, 27 July, he faces unbeaten Indonesian hero Stefer Rahardian at ONE: REIGN OF KINGS, which takes place at the Mall Of Asia Arena in Manila.

For Catalan, it has been a wild journey. However, just before he launched his mixed martial arts career, that road took a sharp twist, and he was forced to say goodbye to the love of his life. Catalan will never forget the first time he saw his wife, Edlyn.

Edlyn and her family moved to Iloilo, and she enrolled in the same high school where Catalan attended. They instantly fell in love, and she decided to continue her college education in the same city.

However, her mother and father did not approve of their relationship.

In fact, they did not enroll their daughter for a second semester, because they did not want her to see “The Challenger” or spend any time with him. They did not believe he could support her financially.

“As parents, they wanted security for their daughter, so why would she go out with someone like me, who is dirt poor? They thought she would be better off looking for a rich man instead of me,” he explains.

Catalan, who was then a varsity player for the boxing team at the Western Institute of Technology, was determined to complete his Bachelor of Science in Marine Engineering.

Meanwhile, she was determined to accomplish a different goal – to be with Catalan.

Edlyn ran away from her parents’ home in order to be with the man who captured her heart. The budding martial artist initially shunned her, hoping to convince her of a brighter future if they finished their studies, but his efforts did not work.

“She walked in the highway and told me that if I told her to go home, she would kill herself,” he recalls. “Of course, all I could do was run and save her. I was not able to finish my studies because of love.”

The couple’s decision to live together did not sit well with their parents.

He won numerous accolades for the country while with the team, and in 2009, he was invited to become one of the primary coaches for the Canadian National Team.

Just when it seemed like things were looking up, tragedy struck.

While he was living in Canada and just starting to coach the team, his wife back home in Iloilo was diagnosed with hyperthyroidism — a serious medical condition that needed urgent care.

“It was toxic and needed treatment immediately,” Catalan explains.

“All my earnings were poured into her medication, and I came home with practically nothing, because she was hospitalized for about six months. Those were two silent years where I stepped away from competition and coaching so that I could take care of my wife.”

During these troubled times, he experienced even more tragedy when he lost a son. Catalan’s pastor helped him navigate through the dark times, while his wife started to get better. “The Challenger” and Edlyn also spoke to a private doctor, who said she could undergo radiation to cure her condition.

The Wushu World Champion went back to work as a striking coach for a mixed martial arts team in Manila. Later, he took a coaching job with the Beijing Empire MMA club, relocated to China, and saved money for his wife’s treatment while she remained at home.

However, Edlyn’s condition soon worsened while he was training for his ONE Championship debut.

“A couple of weeks before I went home, she asked me to take her to the hospital,” says Catalan. 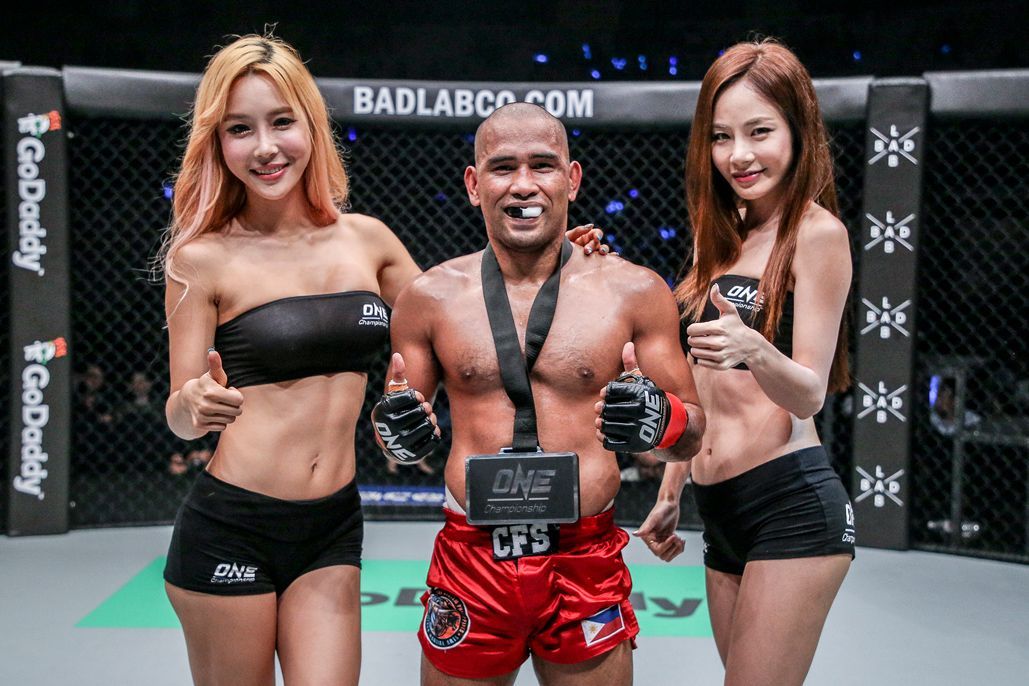 Catalan was scheduled to make his mixed martial arts debut against Alex “Little Rock” Silva in April 2013 – just two weeks after he laid his wife to rest.

While most athletes would have withdrawn from the event, the Filipino decided to honor his commitment.

“I thought about backing out, because my life was pointless,” he admits.

“I was persevering because of that one person, and she was gone. However, I also thought about my children. I needed to live for them.”

However, there was to be no fairytale triumph over adversity, as he suffered a loss against Silva, as well as another defeat and a no contest in his next two bouts.

Catalan’s string of professional setbacks, coupled with his overwhelming challenges in life, would be reason enough for most people to give up and choose a different path.

However, “The Challenger” is made of stronger stuff than the average joe.

Inspired by the other important people in his life, he dedicated himself to turn his career around, and he has since impressed with a four-bout win streak – one of the best runs of any athlete in his division.

“My main source of inspiration is my children,” he said. “Secondly, my athletes (at Catalan Fighting Systems), so that I can feed them and help them improve their lives in the province.”

As his gym expands and produces athletes capable of competing on the global stage for martial arts – such as atomweight contender Jomary Torres – he is committed to continuing to move forward, both in his career and his life.