Arnaud “The Game” Lepont made a thrilling return to ONE Championship last November, and he did not show any signs of cage rust as he dominated Richard “Notorious” Corminal en route to a first-round submission victory.

After more than two years away from competition, the Vietnam-based Frenchman looked as fresh and ferocious as ever. He needed just three minutes and sixteen seconds to get back into the win column.

Now, nearly three months removed from that victory, Lepont has had some time to reflect on his martial arts career. The 37-year-old admits he has to look at his options while balancing a gym, a family, the athletes who are coming through his ranks, as well as his own battle against Father Time.

In this exclusive interview, “The Game” shares his thoughts on his career, his next move, and the wider goals on the horizon. 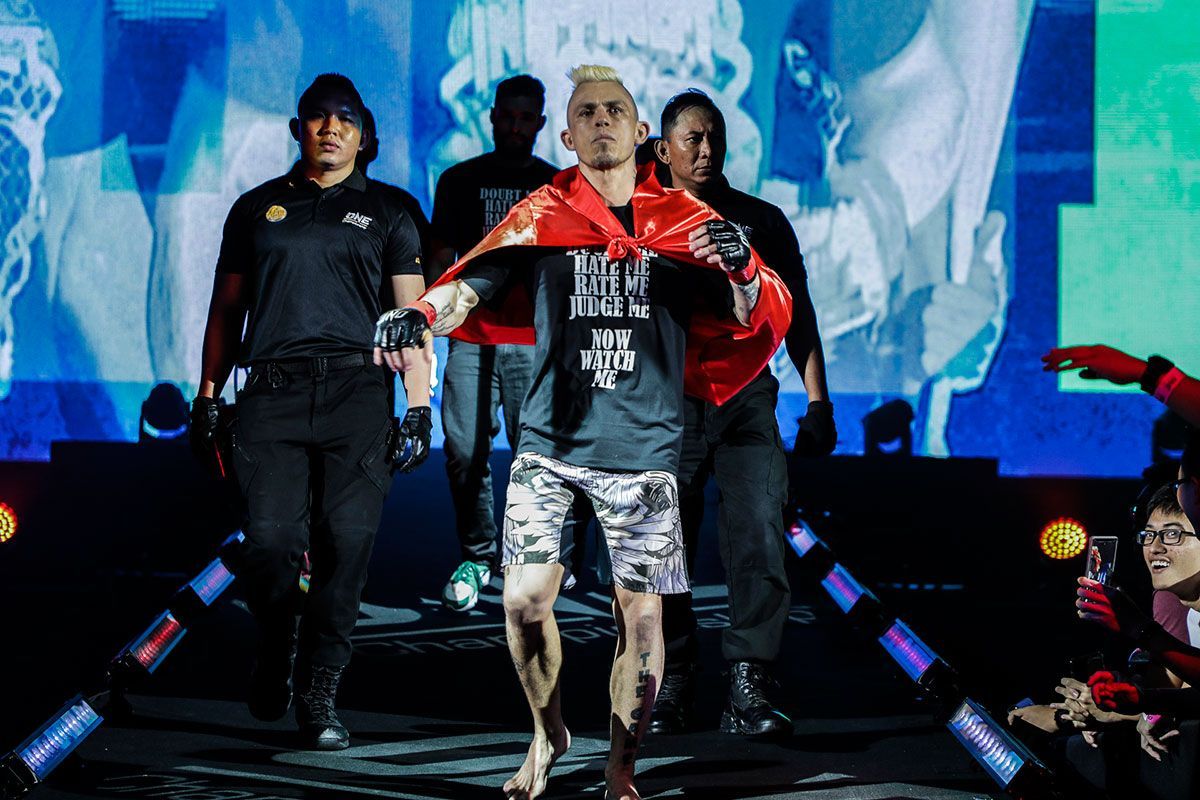 ONE Championship: Tell us a little bit about the hiatus you had, and why you were away for so long?

Arnaud Lepont: When I faced Vincent Latoel [in September 2015], the match did not go my way. I competed with the wrong game plan. I spent a couple of days in the hospital, so it makes you re-evaluate your skills, overall how you train, and what you are doing for a living. I just took time off for myself, my family, and my friends, and tried to expand what I was doing.

ONE: What made you return?

AL: Chatri Sityodtong [Chairman and CEO of ONE Championship] invited me to Singapore, and we had a long talk. He showed me the new and improved ONE Championship, and had the words to bring me back.

ONE: You came back looking rejuvenated and picked up an excellent first round submission win over Richard Corminal at ONE: IMMORTAL PURSUIT. How did you feel?

AL: The last match was pretty cool. When the music starts and you get on the ramp, everything fades away. it is just totally magical. It was good to be back with a win, especially after two years off.

Sometimes, you do not take your opponent seriously or overthink about them. I do not know Richard, but what I do know is that he took me very seriously, so I know that he trained for me. He did not stay at home and watch TV. I even heard he went to Team Lakay to train, as he is originally from the Philippines.

I knew he took some time to do his best, so in my mind I was expecting the best Corminal possible. It was a release. On that day I was better, I was more aware, and my game plan was better. ONE: You were quite emotional after the win. Why?

AL: The return was emotional. It was not about fear. The only thing that bothered me was disappointing the fans. The day I put my signature on the contract, it was done, I will not be scared about the opponent. If you are not scared at all, then you are stupid. But my fear is not losing, it was to underperform, and not show what I can do after two years of training.

I was joking before the match with my corner. I said if I win the match and make it look easy, then I will get out of the cage and give a kiss to Matt Hume [Vice President Of Operations and Competition], and that is what I did. I could see he was like, “What is he doing?” But it was fun, and I went to see the fans and gave a couple of hugs.

I had to show a little bit of gratitude to these people who put their reputation on the line to bring me back: Matt, Victor [Cui, CEO International of ONE Championship] and Chatri. They said I did my job and got the finish, and to take some time off and thanked me. ONE: How did you manage to balance your training for the match, and your duties as a coach and trainer?

AL: It was really, really difficult. I will not lie to you. Personally, I think it is very rare to find a guy who can be a good coach and a good athlete. I mostly think that you are either one or the other. But I like coaching. I have a couple of athletes that I like to train, whom I will be putting in for matches. I train May Ooi, I used to train Shannon Wiratchai, and I train Sotir Kichukov.

I try to balance both. But when I signed for a match with ONE and agreed on the opponent, I pulled myself from my position a little bit and tried to focus on myself — focus on what I was supposed to be doing with training, and resting. It is a big sacrifice, as you can lose some clients who pay to train with you. It was a little sacrifice on my side, but at the end of the day, it paid off.

ONE: How does developing other martial artists tie in with your own personal goals? Do you still have things you want to achieve?

AL: As a martial artist, I have had 16 or 17 matches as a pro, and I had 10 amateur matches. I have done lots of what I wanted to do in the business. I won a European title, I faced my idol [Shinya Aoki], which was very stupid, but still, I did it. The next match, I will really consider the match depending on who they are going to put in front of me. I need someone who will motivate me to set aside my work, my time at the gym, and my time with my son.

It is totally different being outside of the cage, and I think it is more difficult watching your student get in. I am close to them. May is like my sister, Shannon was like my little brother, at the moment Sotir is in the gym every day training his butt off. It is great to be inside the cage, and it is great to be outside [of the cage], but they are two totally different things. 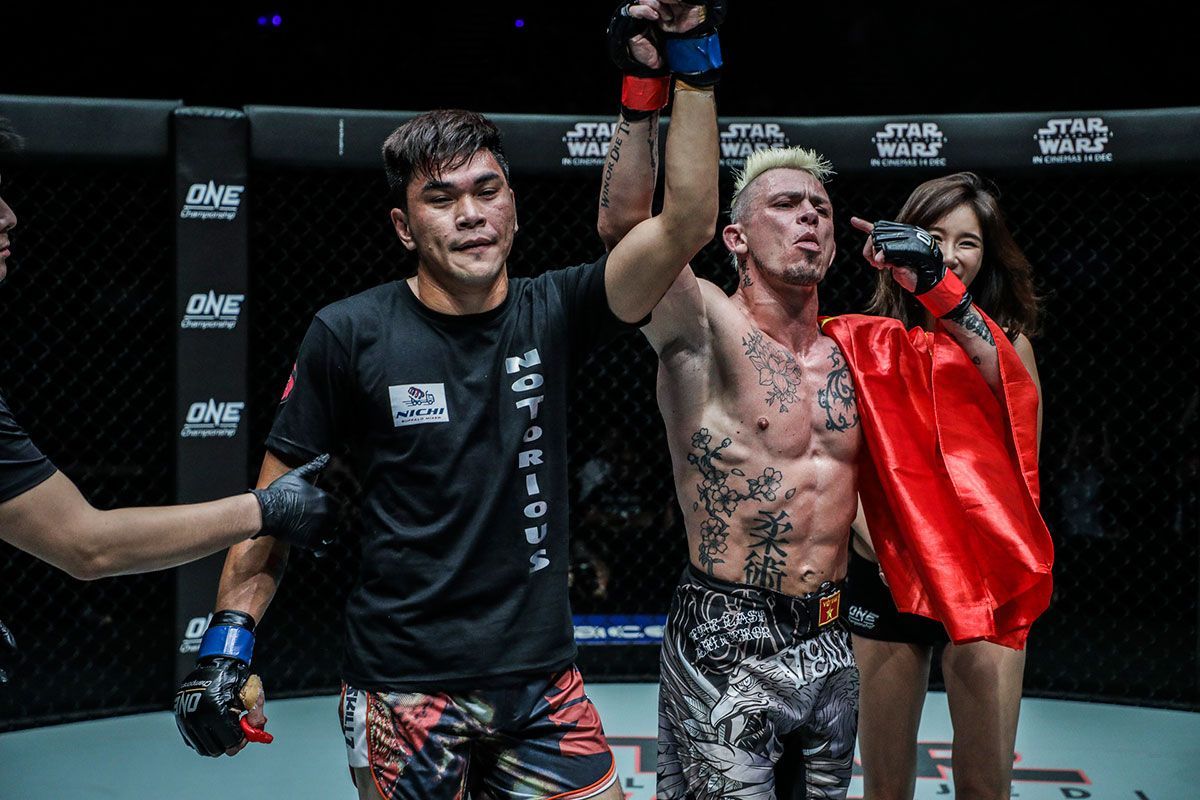 ONE: How will you know when the time is right to step away?

AL: My wife always tells me I am too old for this, but people do not understand. You have to walk down that ramp, get into the cage, and stand across from your opponent. I still enjoy that. I will keep going until my health will not allow me to do it.

ONE: You hinted at a drop to featherweight. Are you still thinking about that?

AL: Yeah. The new concept of weigh-ins at ONE is amazing as an athlete, and it is really good for the sport of martial arts. For my last match, in six weeks I dropped to 75.7kg. I was even extremely over-hydrated, drinking 4 liters of water a day. In my mind, I thought I could drop to 70kg and still be well-hydrated. It has to fit in, and be discussed it with ONE. We have to agree on doing it, but in my mind, it is something maybe fun to finish my career with.

It opens up many more opponents I never thought of facing before, opponents who would be fun to battle with. I have some ideas who my last matches in my career would be with, but it is also a business decision for ONE, so I am open minded.