ONE Championship has made a home at Bangkok’s Impact Arena.

The world’s most exciting martial arts spectacle has hosted two blockbusters in the Thai capital, beginning with its inaugural show in the country, ONE: KINGDOM OF CHAMPIONS, back in May 2016. Since then, a number of stars have arisen, and made their presence felt inside the cage with awe-inspiring performances.

This Saturday, 9 December, the promotion returns with ONE: WARRIORS OF THE WORLD, and will once again deliver a night of non-stop martial arts action. Here are just five of the most memorable highlights of ONE’s previous visits to Amazing Thailand.

This Saturday night, Yoshitaka “Nobita” Naito will once again grace the cage in Bangkok, this time against Brazil’s Alex “Little Rock” Silva, in what is a highly-anticipated showdown between two elite grapplers.

The bout takes place in the main event of ONE: WARRIORS OF THE WORLD, and Naito will be defending the ONE Strawweight World Championship that he took by force in the same venue.

While these two will be competing against each other for the first time, there is an additional edge to this upcoming contest. In May 2016, at ONE: KINGDOM OF CHAMPIONS, Naito challenged Silva’s friend, Evolve MMA teammate, and then-champion Dejdamrong Sor Amnuaysirichoke.

For Thai fans, Amnuaysirichoke is a legend in the sport of Muay Thai, having won the prestigious Lumpinee Stadium Championship on three occasions. After transitioning to the ONE cage in 2014, he took the rest of Asia by storm and racked up five consecutive wins, including a gutsy performance against Roy Doliguez in 2015 to capture the inaugural strawweight title.

So when Amnuaysirichoke was slated to defend his newly-captured belt against Naito in his first match back home, since becoming the ONE Strawweight World Champion, and in the main event of ONE’s first foray into Thailand, you can imagine just how much it meant to the Thai hero.

However, Naito drowned out the cheers in a packed Impact Arena with a dominant grappling performance, taking the Thai’s best shots before forcing the champion to succumb to a rear-naked choke in the fourth round.

It was a tremendous war of attrition between the two, and both men were completely spent when it was all said and done. However, Naito’s performance earned him the coveted title, as he dethroned a national icon.

Angela Lee is in ???? form ahead of her title defense on 26 May!TV: Check local listings for global broadcast | PPV: Official livestream at oneppv.com | Tickets: bit.ly/oneheroes

Lee, who had won the title in a tremendous five-round unanimous decision victory over Mei Yamaguchi just ten months earlier, was making the first defense of her new atomweight belt at ONE: WARRIOR KINGDOM in March 2017.

Her opponent was Chinese Taipei’s Jenny “Lady GoGo” Huang, who had earned a shot at the title with an incredible Submission of the Year victory over the Philippines’ April Osenio. 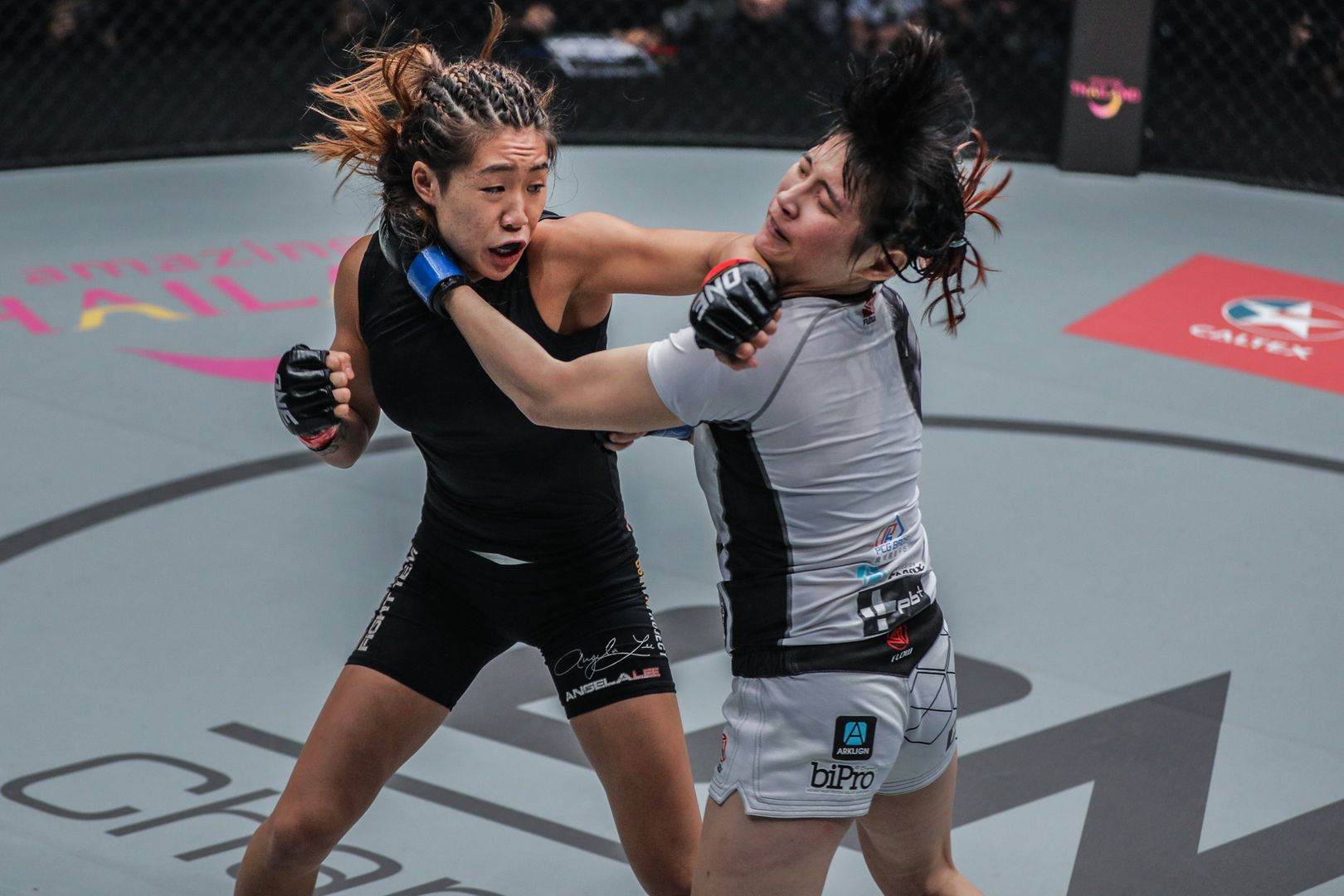 Huang is known as an incredible competitor with terrific grappling skills. But she was simply no match for Lee, who showcased a new dimension to her growing skill set by completely lighting up the Chinese Taipei native on the feet.

Lee overmatched Huang, peppering her opponent with pinpoint and powerful combinations en route to a third-round technical knockout. After getting the mount and taking Huang’s back, Lee blasted the Taiwanese star with a myriad of strikes to force the stoppage.

It was a brilliant display of dominance by Lee, who had stamped her claim as one of the best martial artists in the world.

Knockout Of The Week: Nastyukhin vs Lisita

Timofey Nastyukhin lives up to his surname with the joint-fastest finish in ONE Championship history.

Posted by ONE Championship on Sunday, September 11, 2016

A highly-anticipated showdown between Russia’s Timofey Nastyukhin and Australia’s Rob Lisita took place at ONE: KINGDOM OF CHAMPIONS.

Fans were looking forward to this bout at the time of announcement, as it put a bonafide knockout artist in Nastyukhin against the always dangerous Lisita, who himself was looking for a highlight-reel finish.

Things could not have been any more thrilling, however, as Nastyukhin needed only six seconds to put his Australian opponent to sleep with an explosive left hook.

Countering Lisita’s low kick, the Russian unloaded an explosive combination, which knocked out Lisita and forced the ref to halt the contest immediately. The KO tied Mario Satya Wirawan’s record for fastest KO in ONE Championship’s history.

This beauty is a beast too. ????TV: Check local listings for global broadcast | PPV: Official livestream at oneppv.com | Tickets: bit.ly/oneheroes

With the opportunity to inspire women in Thailand who dreamed of becoming sports superstars, Thai warrior Rika “Tinydoll” Ishige proudly donned a pair of ONE leather gloves to put on a show for fans in Bangkok.

Training in martial arts under the guidance of her boyfriend, ONE lightweight contender Shannon “OneShin” Wiratchai, for the past few years, “Tinydoll” felt confident in finally making her promotional debut.

Ishige needed just one round to defeat her opponent, Audreylaura Boniface. She dominated the Malaysian with a series of fluid ground transitions, which led to a spectacular finish with only 28 seconds remaining in the opening stanza.

Judging by how “Tinydoll” delivered the TKO with an entire arena cheering her on, it was evident that a new star was born.

Posted by ONE Championship on Wednesday, August 30, 2017

Being the birthplace of Muay Thai, the country is naturally teeming with master practitioners who are more than proficient in “the art of eight limbs.” There may not be a better example than Sagetdao “Deadly Star” Petpayathai.

Petpayathai is a Rajadamnern and four-time Lumpinee Stadium Champion who has won every major title in Muay Thai, and features some of the most devastating striking techniques in the cage. The 30-year-old enjoyed an illustrious professional Muay Thai career, finishing with a record of 162-62-1, and was voted by Thai media as one of the greatest Muay Thai practitioners in history.

When he made his ONE debut just last March, much was expected from the Thai legend, and he delivered. Putting his entire striking arsenal on full display, Petpayathai blasted Malaysia’s Kelvin Ong with a myriad of knees and punches, scoring the first victory of his ONE career via technical knockout.