14 June 2017 – Yangon, Myanmar: The largest sports media property in Asian history, ONE Championship™ (ONE), will make its triumphant return to Yangon for another evening of authentic martial arts action. ONE: LIGHT OF A NATION takes place Friday, 30 June, and is set to once again electrify the iconic Thuwunna Indoor Stadium. In the main event, ONE Middleweight World Champion Vitaly Bigdash defends his title against hometown hero “The Burmese Python” Aung La N Sang.

Ticket information for ONE: LIGHT OF A NATION is available at www.onefc.com 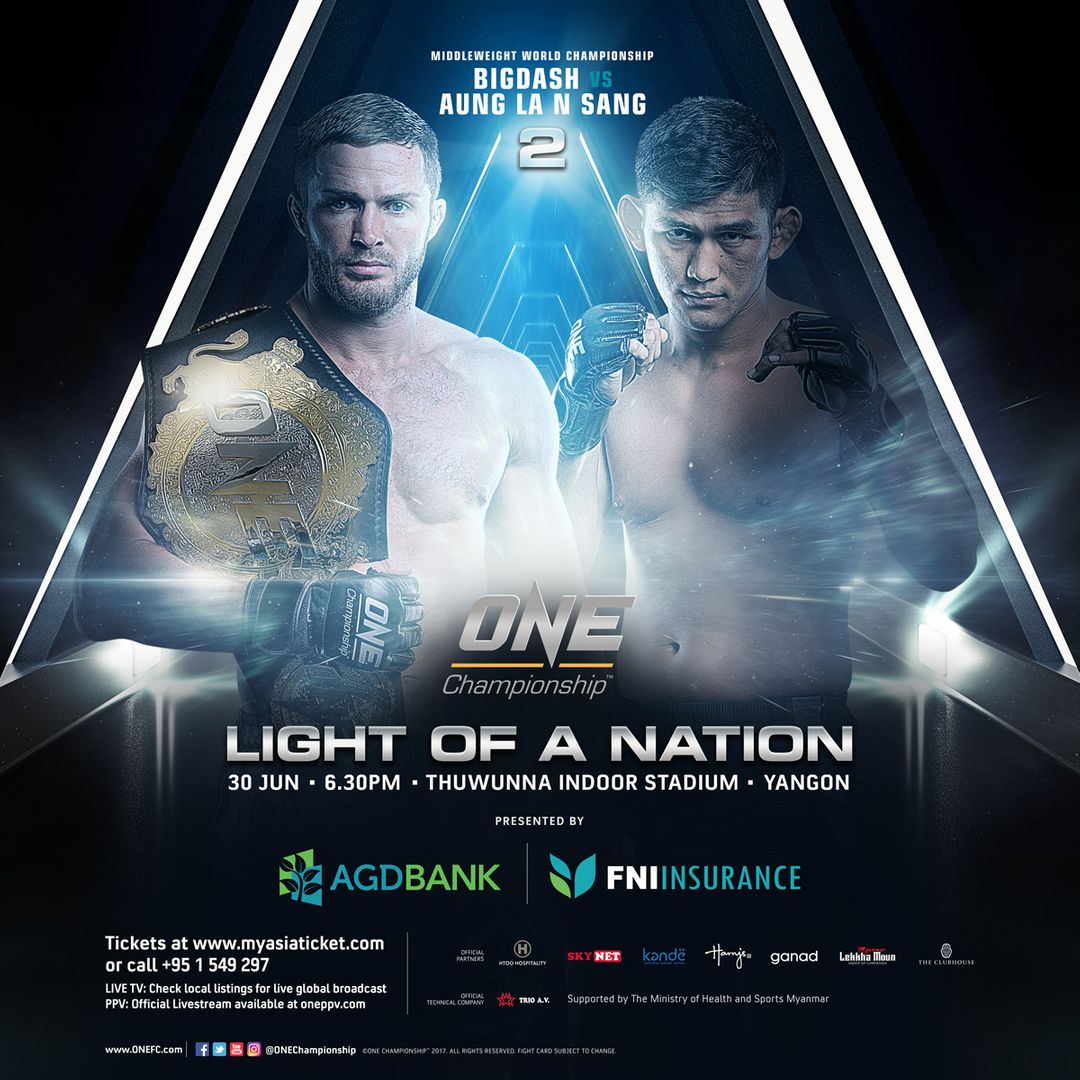 ONE Middleweight World Champion Vitaly Bigdash of Rostov-on-Don, Russia, has proven to be one of the most talented martial artists in the world. Making his ONE Championship debut in 2015, Bigdash captured the middleweight title with a resounding technical knockout victory over Igor Svirid, in one of the most action-packed contests in ONE Championship history. In his last bout, Bigdash successfully defended his world title for the first time against Aung La N Sang, winning by unanimous decision. With an unblemished professional record of nine wins and no losses, Bigdash is set to return to the ONE Championship cage in a rematch against the Myanmar hero.

32-year-old top middleweight contender Aung La N Sang is one of the world’s most renowned athletes from Myanmar, whose constricting style has earned him the moniker of the ”Burmese Python”. In his most recent outing, Aung La N Sang battled valiantly against reigning ONE Middleweight World Champion Vitaly Bigdash, losing via decision. This time, the Myanmar national hero believes he can produce a different result with better preparation in a highly-anticipated rematch against Bigdash.

26-year-old Jenny Huang is a female martial arts athlete who represents Chinese Taipei. Highly-regarded as one of the most skilled talents in ONE Championship, Huang sports a professional record of five wins and one loss, losing only to reigning ONE Women’s Atomweight World Champion Angela Lee in her most recent bout. Of her five victories, Huang owns three via impressive submission. Huang is now set to make her much anticipated return to the ONE Championship cage and will take on Mei Yamaguchi.

34-year old Japanese martial arts veteran Mei “V.V” Yamaguchi is a female atomweight from Tokyo and is the former DEEP Jewels Featherweight Champion. She owns a stellar 15-10-1 professional record, including six submissions and two knockouts. In 2016, Yamaguchi challenged Angela Lee for the inaugural ONE Women’s Atomweight World Championship, an epic showdown that would later win multiple Fight of the Year honors. In her last bout, Yamaguchi fell to former two-time Muay Thai world champion Istela Nunes. She is set to take on dangerous submission specialist Jenny Huang next.

26-year-old Brazilian jiu-jitsu world champion Bruno “Pucci Bull” Pucci from Brazil is ready to make his much-awaited return to the ONE Championship cage. A first degree BJJ black belt and world champion in No Gi, Pucci is famous for finishing all his fights via rear naked choke. Pucci has experienced mixed results so far in his professional mixed martial arts career, but he is determined to get back on the right track. He will take on Filipino Jimmy Yabo in his next contest.

36-year-old Jimmy “The Silencer” Yabo is a former Philippine featherweight standout with a mixed martial arts record of 5-4, 1 NC. He boasts one of the best finishing percentages in the division, having stopped all five of his opponents by  knockout. Although Yabo has experienced highs and lows throughout his career, the rededicated veteran is looking to add one more to the win column. However, he will have to go through grappling ace Bruno Pucci to earn the victory.

Unbeaten Tha Pyay Nyo, who owns an unblemished professional record of 3-0 and is the ONE Myanmar Featherweight Tournament 2015 Champion, will return to the ONE Championship cage to face Lethwei fighter Htet Aung Oo, who makes his promotional debut.

Kevin “Old Boy” Chung is a 24-year-old South Korean who was born and raised in the United States. He started his amatuer mixed martial arts stint in his adoptive hometown of Centreville, Virginia, in 2010. Chung turned professional in 2015, and currently holds an perfect win-loss record of 4-0. Two of his four pro career wins have come by way of spectacular submission. Chung prides himself on being an exciting competitor, willing to please the crowd by always seeking the highlight-reel finish. He makes his ONE Championship debut against Zhong Qingya.

26-year-old Zhong Qingya is a Brazilian jiu-jitsu practitioner from Chengdu, China. Along with the rise of Chinese martial arts talent in Asia, Zhong will be making his second ONE Championship appearance against Kevin Chung.