She may have been away from the Circle for more than a year, but Tiffany “No Chill” Teo picked up right where she left off with another sensational comeback win, this time to hand Ayaka Miura her first loss in ONE Championship.

Just like in her bout with Michelle Nicolini, the Singaporean star looked like she might have to tap to a tight submission attempt in the first round at ONE: KING OF THE JUNGLE, but once again, she survived and came back stronger.

Teo’s defensive grappling was exemplary and this time, she claimed victory via TKO in the dying seconds of the contest with a barrage of ground and pound her Japanese opponent had no answer for.

With the win, “No Chill” earned her second shot at “The Panda” Xiong Jing Nan for the ONE Women’s Strawweight World Title, which is expected to take place later this year.

Now that she has had the chance to celebrate her win, the 30-year-old from “The Lion City” reveals how she feels to be back in action, what was going through her mind during the bout and how it felt to earn her Brazilian Jiu-Jitsu purple belt when she got her hand raised.

ONE Championship: What did it feel like, especially after the layoff, to return to the Circle, and make that entrance walk down the ramp?

Tiffany Teo: There wasn’t any crowd but the feelings and emotions of walking to the cage to the fight was pretty much the same.

It has been a long layoff, so it felt a bit foreign. I kind of forgot what it felt like to do the walkout, and a lot of feelings were overflowing at that point in time.

ONE: Once you stepped back inside the Circle, did everything fall right back into place?

TT: Yeah, I was already warming up backstage with my coaches and trainers before the entrance walk, so I was at the right place mentally – ready to go the moment I got inside the Circle.

ONE: Miura had you in a tight arm-triangle choke in the first round. What was your strategy and what were you thinking of at the time?

TT: In the first round my game plan was to keep things at a distance first – just trying to strike with her and not letting her close the distance, but my distance management was kind of off in the first round.

I allowed her to come too close to me, and that’s when she managed to clinch up. She was really desperate, she just held on, because that’s the only way she knows she can win the fight – based on what we have seen from all her previous fights. When she got me to the ground, I just stayed composed. 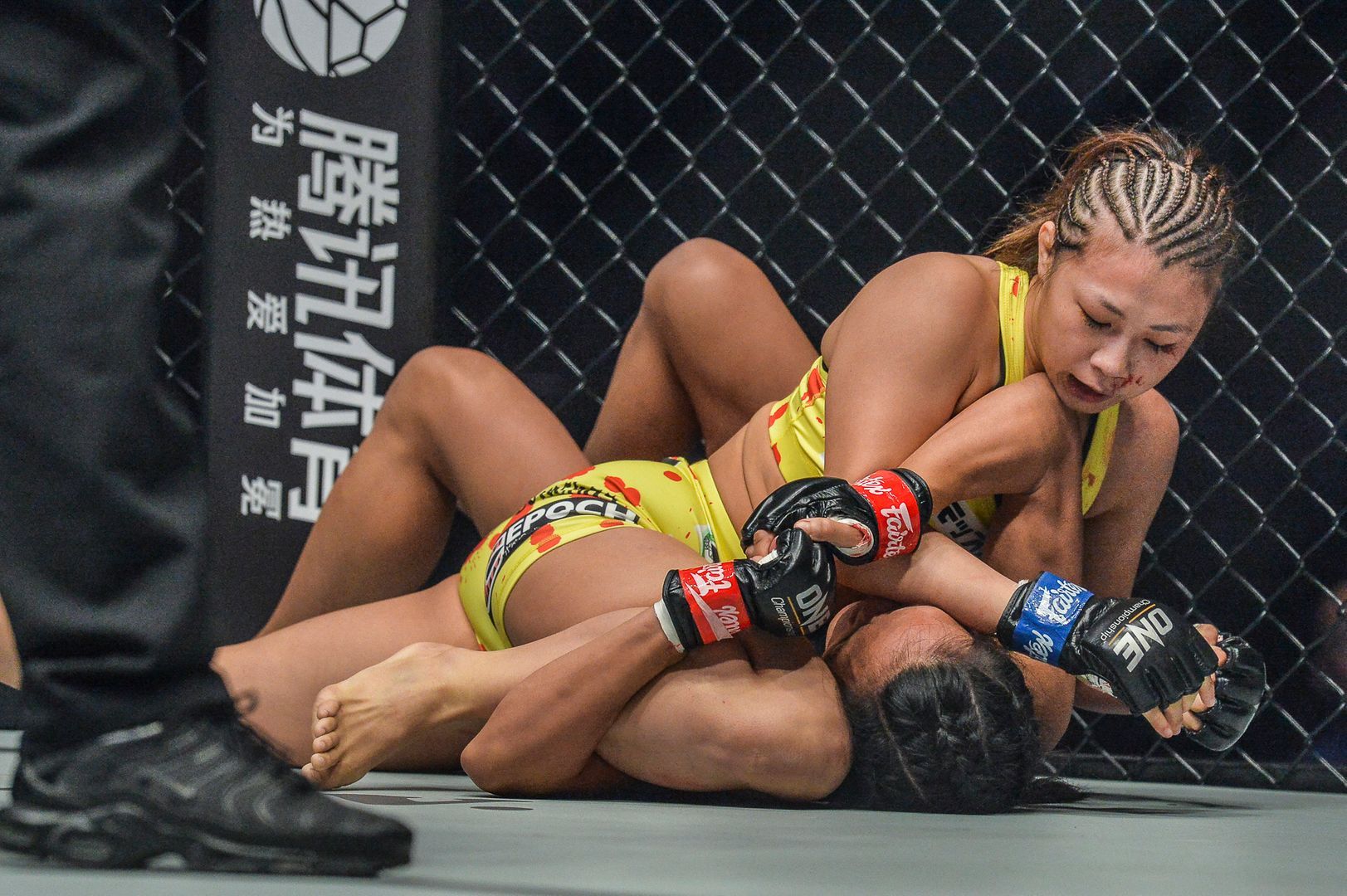 ONE: Do you think her confidence was damaged when you got up at the end of the first round?

TT: Honestly at the end of the first round, I told myself, ‘You’d better get your act together [laughs].’ Because things just went to the worst-case scenario and it was the position we didn’t want to be in the fight, and we ended up there in just the first round.

My cornermen almost passed out trying to corner me. They said, ‘Why do you always do this to us every fight?’ [laughs]. But, because I had already gotten myself into the worst-case scenario and I had gotten out of it, plus she knew that was the only thing she could do to finish the fight, and because she couldn’t get it done, I am sure her confidence took a huge hit.

ONE: In the second round, you used the clinch to do some damage to her. Were you surprised that she refused to let go?

TT: Yeah that wasn’t a good position for her to be in even if she was trying to get the takedown, but I guess that’s really the only thing she knows how to do and that’s her only go-to takedown. So she desperately held on to it. 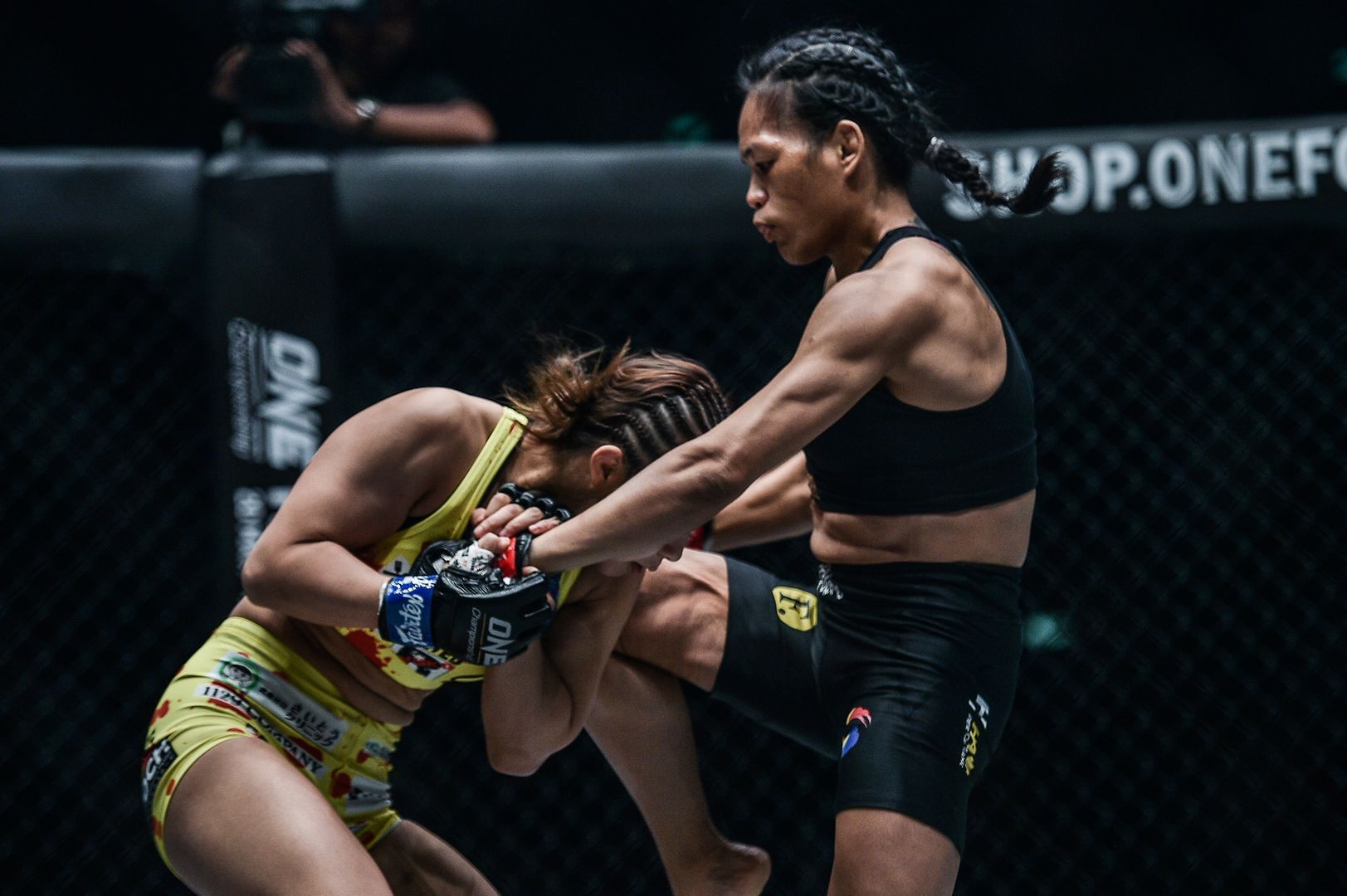 ONE: At what point did you feel things started to be going in your favor?

TT: From the second round onwards, I felt like I had the distance right and I had different points of defense where I could still defend the takedowns and do some damage to her at the same time.

ONE: Did you feel like you could have ended the fight earlier after she got tired in the second round?

TT: I did feel that way, but at the same time, I was a little hesitant about committing to some of the kicks and punches because sometimes when I overly commit to my strikes or kicks, that’s when the takedowns happen. 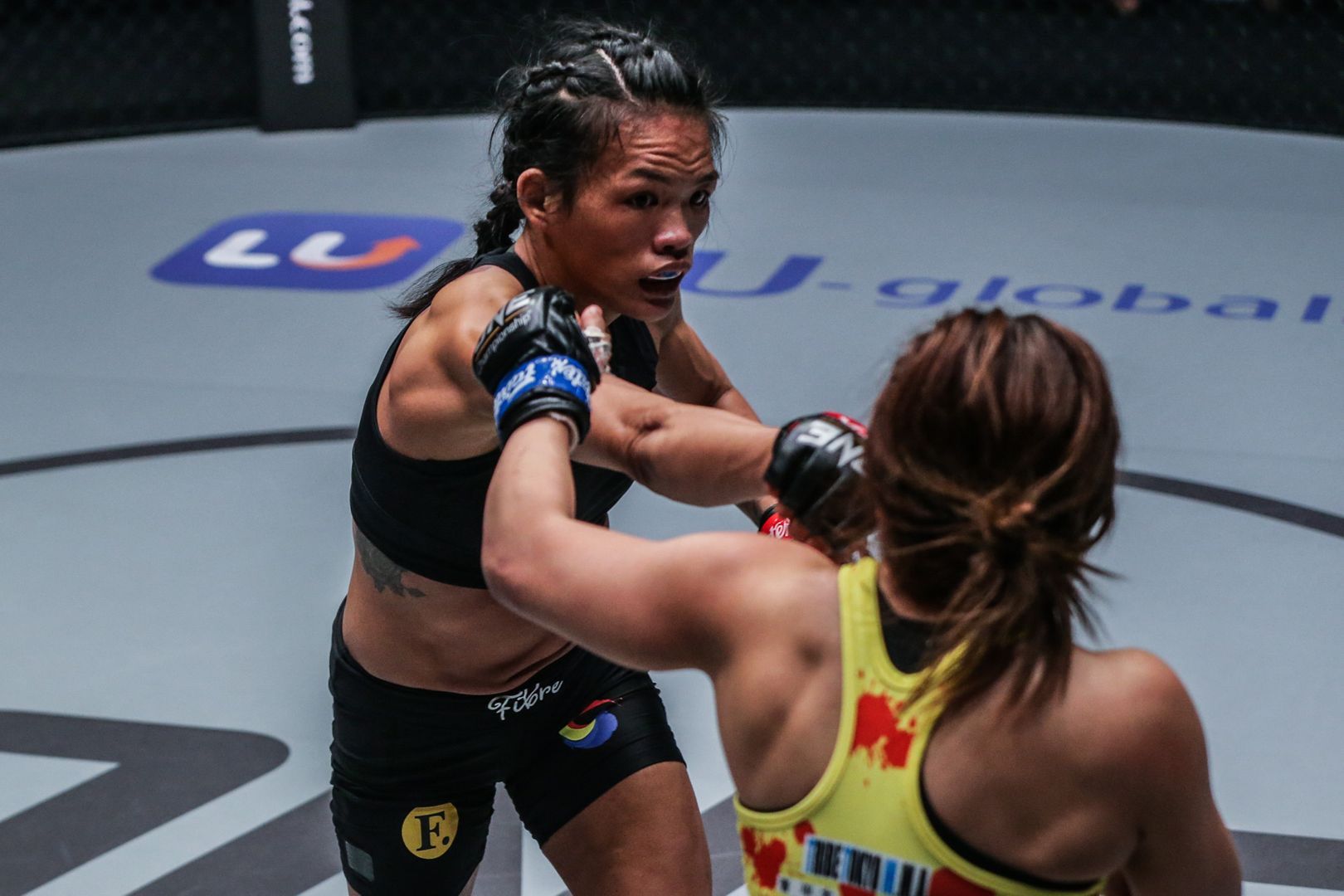 ONE: Were you surprised she survived your ground and pound at the end of round two?

TT: She’s a really tough girl, she took a lot of clean shots, a lot of knees to her head, body, and elbows, but she wasn’t giving up. She was still hanging on and trying to find a way to get into a better position.

ONE: What made the difference when you got to a similar position in round three and got the TKO?

TT: I guess because she was kind of staying in that same spot for too long without really doing anything to improve her position, I think the referee had to think of her wellbeing and not let her take any more extra damage.

ONE: Can you describe your emotions when the match was stopped and you laid back on the canvas?

TT: At that moment, it was a huge relief when the referee called off the fight. Like I said, it was pretty overwhelming coming back. [I felt] a lot of emotions making the walk back to the Circle.

After a long layoff and finally getting back, and chasing my dreams again, it was a moment of relief and all the emotions were just sinking in. 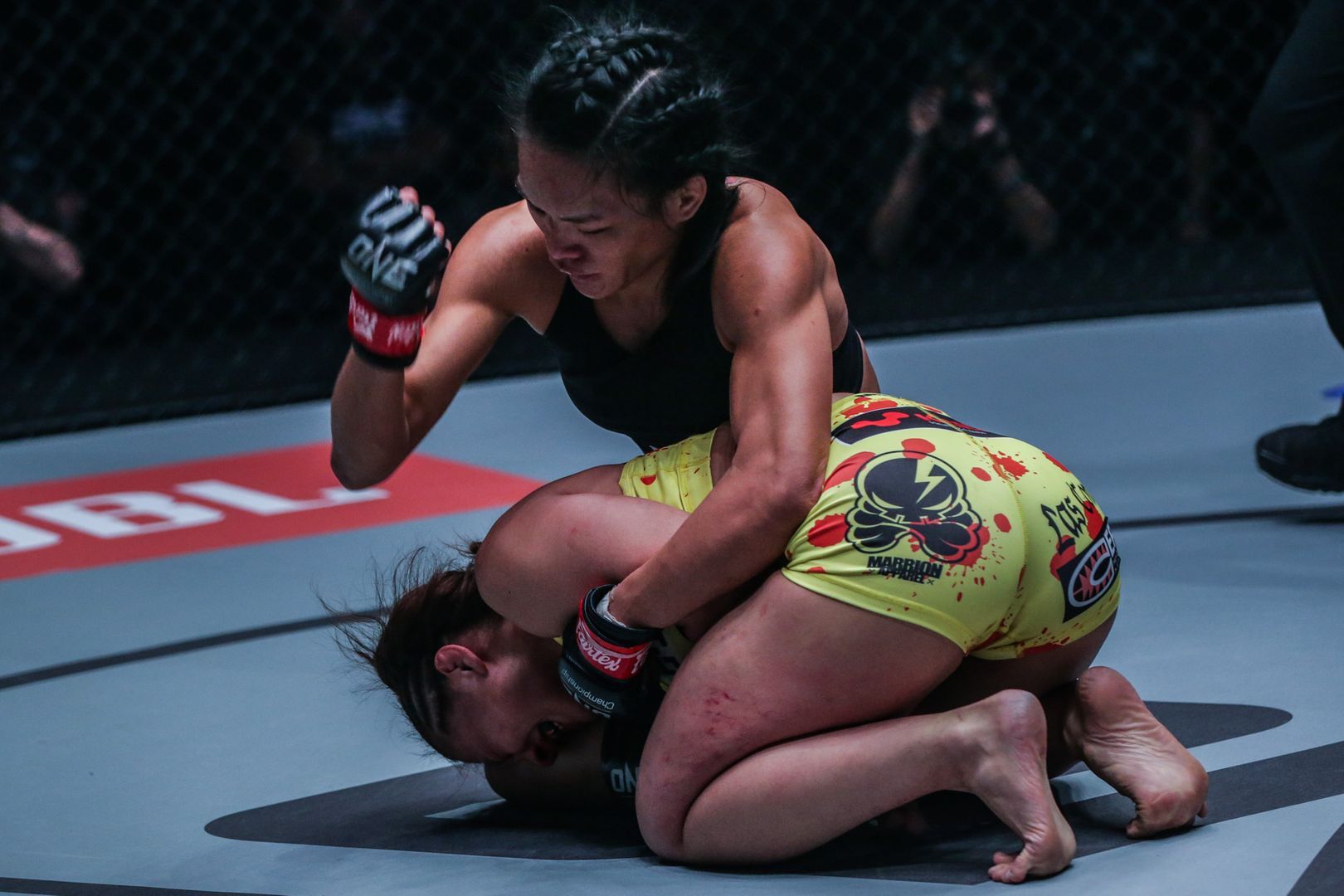 ONE: How did it feel to get your purple belt after the match, too?

TT: There’s a funny story behind that. There’s this tradition that when you get promoted, there’s a gauntlet where you have to get whipped by your teammates. Many gyms do it as a form of lighthearted ritual. I refused to go for promotion because I didn’t want to get whipped [laughs].

I kept insisting that it made no sense that I had to work so hard and those guys got to whip me, so my coach had a hard time trying to promote me, so this was his only option to promote me without me getting whipped. I kept telling him, ‘The only way you are promoting me is if I am not getting whipped!’

ONE: How does it feel to be the number one contender for the ONE Women’s Strawweight World Title again?

TT: I’ve only started hearing a lot about it until the fight week itself because I was mostly focused on what’s right in front of me, which was my match against Ayaka.

I knew that the match-up made sense but I didn’t want to jump into any conclusions. After the fight, many people asked me what I felt about “The Panda.” It’s the only loss in my whole mixed martial arts career, so I’d definitely love the rematch, but if it comes, it comes, I’m not trying to force it. If they feel like I need another win, I’m up for it.

Read more: Top 5 Highlights From ONE: KING OF THE JUNGLE