Jenny “Lady GoGo” Huang has walked into the lion’s den and emerged victorious before.

Two years ago, she faced April Osenio in the Filipina’s home country at ONE: AGE OF DOMINATION and walked away with the most stunning victory of her career.

When she returns to action at ONE: DESTINY OF CHAMPIONS, she will once again meet an athlete buoyed by the support of the crowd in her homeland. The Chinese athlete will face Jihin “Shadow Cat” Radzuan in the Axiata Arena in Kuala Lumpur, Malaysia this Friday, 7 December.

Posted by ONE Championship on Thursday, November 29, 2018

However, it is not something that concerns Huang, who believes it will be her rival who is at a disadvantage because of the weight of expectation on her shoulders.

“I think she should be under more pressure than I am because she is a local fighter,” she explains.

“Everyone has a lot of expectations from her. I feel okay, in a normal mood, because I have faced many locals in previous competitions.

“[Against Osenio] I only focused on my tactics. I didn’t think much about anything else. I always focused on the skills.”

What’s more, competing in KL is nothing new to the judo black belt. She has competed twice before in the Malaysian capital and emerged from both bouts with her hand raised.

Huang is delighted to return to a happy hunting ground, as well as finally get back in the cage after more than seven months on the sidelines.

Flash????: Jenny Huang made a huge splash in her ONE debut!

Flash????: Jenny Huang 黃偵玲 made a huge splash in her ONE debut!Kuala Lumpur | 7 December | 6:30PM | LIVE and FREE on the ONE Super App: http://bit.ly/ONESuperApp | TV: Check local listings for global broadcast | Tickets: http://bit.ly/onedestiny18

“This will be my third time in Kuala Lumpur. I am looking forward to it, and I am very excited. Thanks ONE Championship for giving me this opportunity,” she says.

“I got so excited [to be back]. We reviewed my shortcomings after the last match and strived to strengthen all my skills and strength.”

Huang is one of the atomweight division’s most celebrated submission specialists – three of her four wins in ONE are via tapout – but to round out her mixed martial arts skill set, she traveled to the famous Fairtex Gym in Pattaya, Thailand to prepare for this contest.

There is arguably no better place to train stand-up skills than the facility that is home to Friday’s headliner, Yodsanklai IWE Fairtex, as well as ONE Super Series standouts like Saemapetch Fairtex.

That is far from the only thing “Lady GoGo” has worked on, however.

“I have regular Thai boxing training from Monday to Friday, and I hope to show it in competition,” she says.

“[I have also worked on] boxing, wrestling, jiu-jitsu, control against the cage, ground and pound – I have targeted technical improvement in all aspects of the game – especially in wrestling.”

The outcome of all her work during the past few months is that Huang is confident of overcoming the challenge from Jihin.

“Shadow Cat” comes into the match with a perfect 3-0 record, and a ton of hype after two rousing performances in the world’s largest martial arts organization.

“Lady GoGo” respects her opponent’s skills and achievements so far, but she believes her track record at the highest level, as well as her technical superiority, will help her to silence the Malaysian fans in the Axiata Arena.

“Watching her past competition videos, she has great strength and physical fitness. She has the strength to move constantly, that is what I admire the most,” she says.

“I think wrestling is her strong point. She likes to put her opponent into the floor and do jiu-jitsu.

“She has less experience than I do. I think some of her movements may not be complete. I have also made sufficient preparations for her physical strength.” 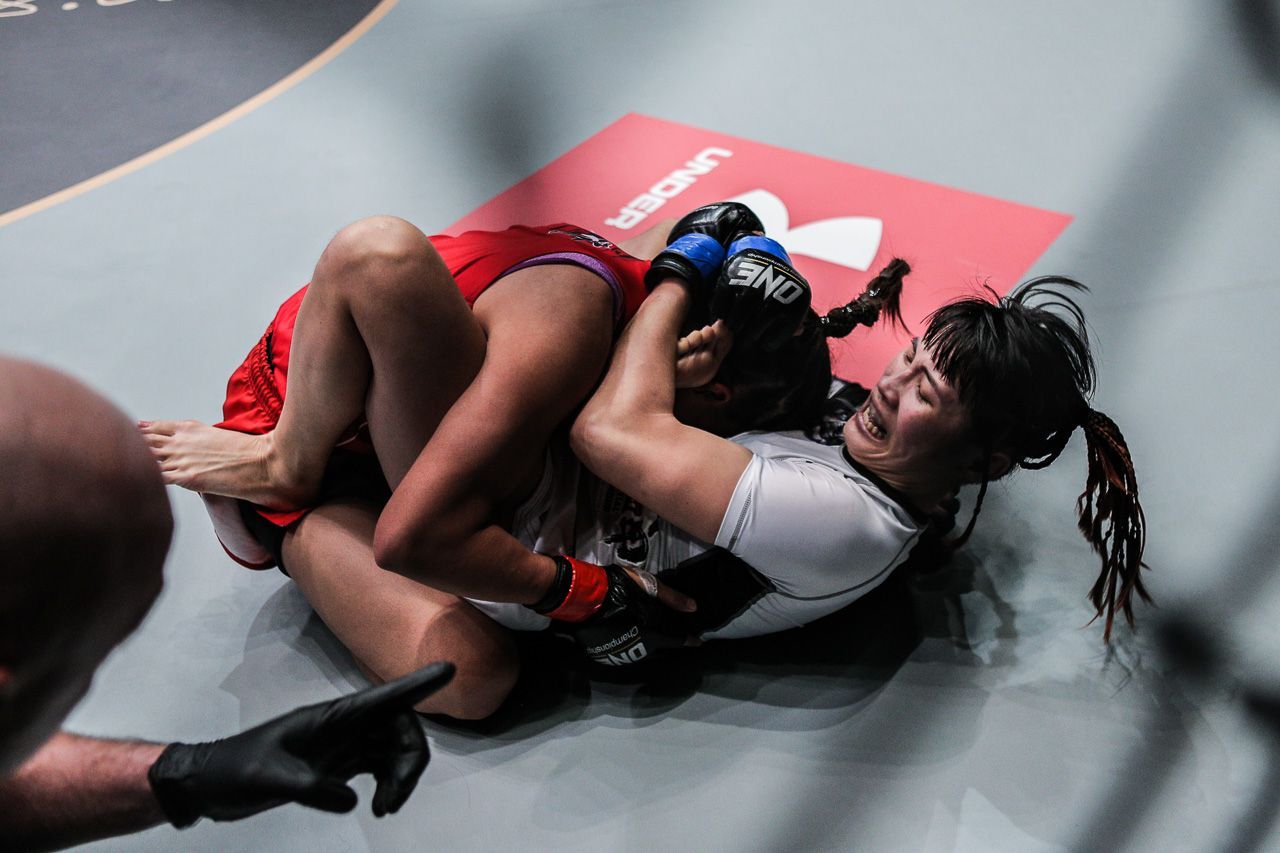 Huang is tight-lipped as to whether we can expect a finish, or what a victory might do for her standing in her weight class, but a ‘W’ on her record matters more than any of that.

“The victory means the most to me,” she says.

“I hope to show the skills I have learned in this match, and concentrate on this match. I have not thought about the next bout yet.”