Judo black belt Jenny Huang stayed undefeated with an impressive gogoplata submission win over April Osenio in their women’s atomweight ONE contest. The bout took place on Friday, 2 December, at ONE: AGE OF DOMINATION in the Manila’s Mall of Asia Arena.

Huang finished the bout late in the second round, but had her hands full earlier in the bout with the hometown hero Osenio.

In the first round Osenio came out of the gates light on her feet and dominated a stiff and immobile Huang with kicks and punches to the body and head. Two left high kicks in particular from Osenio stunned Huang badly.

Huang recovered enough to score an outside leg trip takedown two minutes into the round and landed strikes from inside the active full-guard of Osenio, but soon found herself trapped in a guillotine choke. For a while, the choke appeared to be sunk in deep below her chin, but Osenio eventually popped her head out and regained her footing. 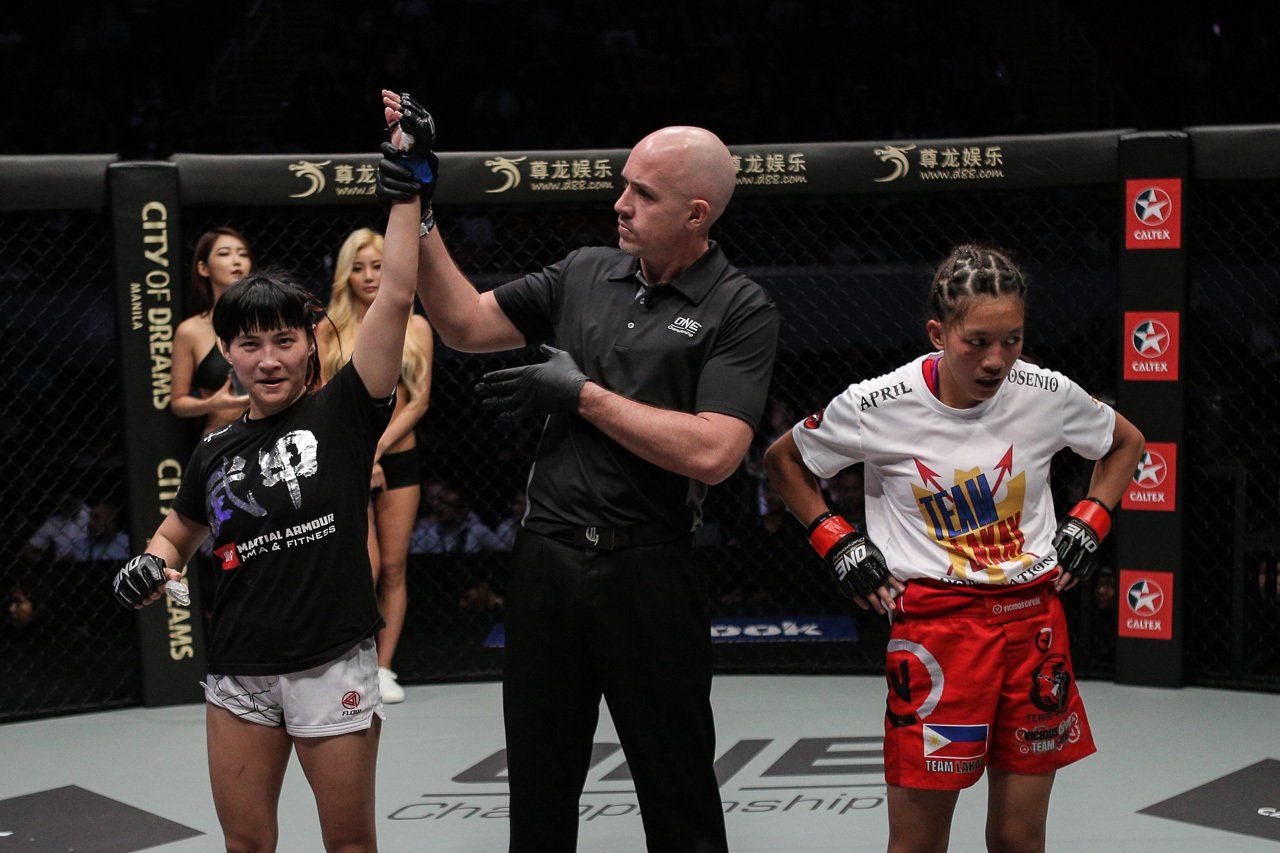 The second round began with two minutes of both women feinting and stalking one another, feeling things out before Huang scored a hip toss takedown and landed flush in side control. From there, the Taiwanese MMA pioneer took Osenio’s back with both hooks in and dominated the rest of the round, transitioning from the back to mount, back again, and eventually side control once more.

Osenio eventually escaped and reversed positions, but Huang smoothly transitioned to an omoplata shoulder lock, hitting an angle and appearing close to finishing. Osenio squared-up with Huang to take pressure off the shoulder, but that was when Huang switched to a gogoplata choke, forcing the submission tap-out.

The end came at 4:28 of the second round. The submission victory is Huang’s third in five pro fights, and is the first-ever gogoplata victory in ONE Championship history.

Osenio’s record dips to 2-2 with the loss, while Huang’s mark improves to 5-0. On whether She thinks the win earned her a shot at Angela Lee’s world championship belt, Huang was hesitant.

“I don’t have that thinking right now for the championship,” said the undefeated Huang. “I am thinking about every bout right now to give me more practice and more experience to move on to the next time, and when the time is right, then the championship.”