More and more women are taking up Muay Thai for sport and exercise – and some are even traveling to Thailand to train and compete.

If you have been thinking about taking a trip to the birthplace of “the art of eight limbs,” there are a lot of things to consider.

Luckily, three of ONE Championship’s top female martial artists – Bi “Killer Bee” Nguyen, Alma Juniku, and Stamp Fairtex – offer their advice on what it is like to train Muay Thai in Thailand as females.

This mornings session started out terribly but I didn’t let myself get frustrated and I stuck it out. Eventually I recovered and by round 5&6 I got it together. It’s common to have bad days. It’s important to JUST KEEP GOING! Khop Kuhn kha @kru_don_muay_thai ????????

She has since relocated some of her training to Thailand, where she has taken her striking skills to the next level. It is something she recommends anyone should try.

“Leave your doubts and expectations at home. Believe in yourself and get ready for an adventure!” Nguyen says.

Whether you are in it for the long run, the Vietnamese-American says the best approach to take once you are in “The Land Of Smiles” is to throw yourself into practice sessions as often as possible. That means at least two long classes a day – one early in the morning, and another in the evening when the weather is cooler.

By embracing your surroundings and the Thai way of doing things, you can forget the distractions of everyday life back home and get the most out of your trip.

“I’ve been improving so quickly in Thailand because of the environment,” Nguyen says.

“I have many responsibilities and distractions at home, so being here training in paradise relaxes me. With a clear mind, I can retain more information.”

Picking the right gym can make all the difference. Do you want to be near the beach on one of the country’s islands, or would you rather away from the distractions of paradise in the mountains of the northern provinces?

Once you have narrowed your choice down you can start looking for a Muay Thai gym in Thailand. If you are already a competitor, it is a good idea to choose a facility with an established team of female athletes.

That should help you to find somewhere that has experience molding competitors, classes that host plenty of training partners like you, and an environment that offers female camaraderie for downtime after long training sessions.

But remember, you do not need to settle on the first gym you try. “Killer Bee” recommends traveling around before unpacking your bags.

“There are so many gyms in Thailand to train at,” she says. “My advice would be to try a few the first couple of days. Find a gym with a culture that you enjoy and can grow in.”

According to Juniku, a two-time Muay Thai World Champion, it is also important to put in your due diligence before settling down.

“Choose a gym you’d feel comfortable at, make sure you do your research on the gym first, and ask people that have experienced gyms in Thailand for advice,” she says.

Traditionally, it was almost exclusively men that made up Thailand’s Muay Thai scene, but far more women are starting to emerge at a high level in “the art of eight limbs.”

Turn on the TV in Thailand on any given weekend and you will see both top Thai and international muay ying battling it out in one of Bangkok’s many promotions.

Some of ONE’s top athletes have helped to break boundaries and the culture is more progressive than it used to be with regards to women competing. Fairtex gym, for example, gives both their male and female students the same access to rings and training.

Because of that, Stamp – the ONE Atomweight Muay Thai World Champion – has no issues with being a woman in a Muay Thai gym in Thailand.

“Being a woman at a camp is great,” Stamp says. “Everyone is welcoming and friendly. There aren’t obstacles for me – everything is equal.”

Some gyms, though, will ask women to enter the ring under the bottom ropes, and others may not let women enter the ring at all – so ask before jumping into the ring for your training session.

However, Juniku advises not to let these cultural differences stop anyone from training in Thailand. Rather, they just have to be mindful of them.

“Thailand is a lot different compared to what I’m used to,” Juniku says.

“Cultural differences are normal, so I am careful with what I say or do because what is acceptable back home may not be acceptable [in Thailand].”

As for Nguyen, she is happier training in Thailand than she has ever been.

“Thai people are very polite and friendly. I haven’t found any obstacles to overcome here culturally. It’s been great,” she adds.

Even if you plan to come to Thailand only to train Muay Thai for the experience and the health benefits, that does not mean you might not end up in the ring.

A lot of people who come just to practice their technique end up testing themselves in battle. Most, if not all gyms, will encourage you to step into the ring at least once during your time in “The Land Of Smiles.”

If you are only looking to get into shape, Stamp says there is no need to be pressured into anything. Take everything at your own pace, and you will have a great time.

“I’d advise that you try training Muay Thai first to see how much you like it. It’s a lot of fun, and for those that like it, it’s a great form of exercise too,” she says.

However, if you feel like you are ready, and your coach does too, it is a unique challenge that Juniku recommends.

“Soak everything in, train hard, ask questions, learn a few things from the Thai trainers, and try to fight in Thailand – it’s a great experience!” she says.

Read more: When Is The Best Time Of Year To Train In Thailand? 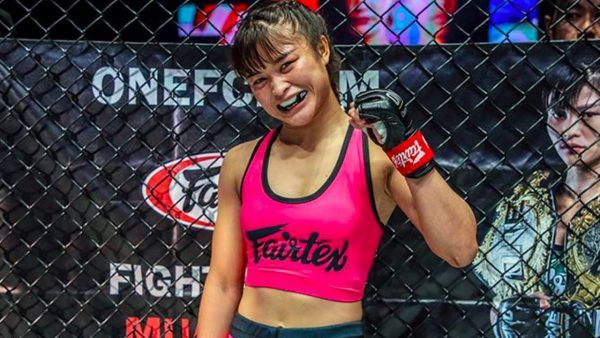