It certainly comes as somewhat of a surprise that the best submissions of the past quarter in ONE Championship all took place on a single night of action-packed fights. Then again, cards in Kuala Lumpur have historically been epic, and ONE: THRONE OF TIGERS, which took place at the iconic Stadium Negara in Kuala Lumpur on 10 February, was no exception.

The top Malaysian talents in the promotion secured a clean sweep, going 6-0 on the night to the delight of their hometown crowd. However, three wins truly stood out from the rest, with two Malaysians making it onto this list of the best submissions of the past quarter.

Prior to stepping inside the cage against former professional boxer Roy Doliguez, Alex “Little Rock” Silva was already riding a three-fight win streak. The Brazilian jiu-jitsu expert currently holds a professional record of five wins and only one loss, and unsurprisingly, all five of his wins have come by submission, which includes a nifty third-round armbar over Doliguez last February.

Knowing full well he owned the advantage on the ground, Silva was aware all he had to do was take Doliguez to the mat and drag him into his world. At the sound of the opening bell, Silva wasted absolutely no time, immediately shooting in for a successful takedown, going to work in the guard.

Doliguez was able to hang on for three rounds however, owing to the Filipino’s inherent toughness, but Silva’s ground game is so overwhelming that you could sense it was only a matter of time before he got the submission.

The end came swiftly as Doliguez made a mistake in trying to reverse his position. Silva got a hold of his arm, and within seconds, had the joint locked, forcing Doliguez to tap out.

Immediately after the bout, Silva motioned for a shot at ONE Strawweight World Champion Yoshitaka Naito. With four straight submission wins in his last four bouts, Silva is in a great position to challenge for the title.

The highly-anticipated matchup between Malaysia’s Keanu Subba and Pakistan’s Ahmed Mujtaba pit two of Asian MMA’s top prospects against each other in a clash of promising young stars. In the end, it was Subba who emerged as the clear winner, outclassing Mujtaba in nearly every category leading up to the spectacular submission finish.

Subba walked out to loud cheers from his hometown crowd. You could actually feel the electricity coursing through the arena. Knowing Subba owned the advantage in the striking department, Mujtaba tried to take matters to the ground. Unbeknown to the Pakistani fighter, however, is that Subba would finish the fight from that position shortly after.

On the mat, Subba completely overpowered Mujtaba, landing punches and elbows from the top. Mujtaba would attempt to get back up to his feet, and although he was successful, Subba effortlessly took him back down.

Subba continued to soften Mujtaba up with ground and pound, and in a flash, the Malaysian fighter was able to grab a hold of Mujtaba’s neck in a guillotine choke. Moments later, Mujtaba could no longer continue and was forced to tap out.

One of the most steadily improving young fighters in ONE Championship is 21-year-old Agilan Thani of Malaysia. Popularly known as “The Alligator”, Thani has come from being an overweight teenager, losing almost 60kg of body fat to become one of the top welterweights in the promotion today.

Unbeaten at 7-0, Thani recently scored his most resounding victory yet, a second-round submission via rear-naked choke over tough Taiwanese competitor Jeff “The Machine” Huang.

ONE Vice President Rich Franklin labelled the Thani-Huang matchup as a fight to watch out for, and it certainly did not disappoint. Huang was set to give Thani his toughest test to date, but the talented Thani instead made handling the skilled veteran look frighteningly easy.

Having worked extensively on his wrestling and grappling, Thani was able to consistently stay one step ahead of Huang in grappling exchanges throughout the course of the bout. It was this constant stream of pressure that was able to secure Thani the win in the second round.

Once Thani was able to take Huang’s back, it was the beginning of the end. With his vice-like grip, Thani latched onto Huang’s neck and squeezed until the Taiwanese fighter tapped. 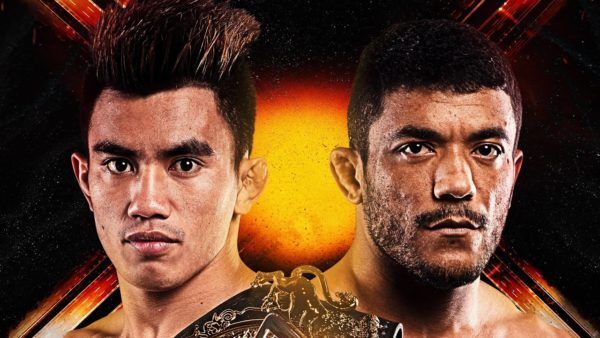