Experts weigh in on a pivotal clash ahead of Friday’s blockbuster event!

The stakes have gotten monumentally higher for a pair of flyweight martial artists, and they will settle their score this coming Friday in Manila, Philippines.

Local hero Geje “Gravity” Eustaquio (9-6) will square off against former ONE Flyweight World Champion Kairat “The Kazakh” Akhmetov (24-1) in the main event of ONE: GLOBAL SUPERHEROES, which emanates from the Mall Of Asia Arena on 26 January.

This will be a rematch from their closely-contested three-round affair last September, but this time, the two dynamos will engage in a five-round war to decide the ONE Interim Flyweight World Champion. He grew up idolizing Bruce Lee, and became completely hooked after watching a small kickboxing event in his native Baguio City. That started a journey which saw him learn kickboxing, earn a place on the Philippine national wushu team, and then score a wushu scholarship to the University Of The Cordilleras.

While there, he befriended head coach Mark Sangiao, who later guided his cage career under the Team Lakay banner. Since his professional debut in 2011, “Gravity” has defeated the likes of Saiful Merican, Anatpong Bunrad, Gianni Subba, and even reigning ONE Strawweight World Champion Alex Silva. As for Kairat “The Kazakh” Akhmetov, competing in sport was only natural for him.

He kicked off his cage career in May 2010, and went on a glorious undefeated run. “The Kazakh” handily beat every foe that stood across from him, which ultimately culminated with his promotional debut opposite ONE Flyweight World Champion Adriano Moraes in November 2015. Akhmetov then bested Moraes via split decision to claim the belt, and become the most successful flyweight in the world at 23-0. 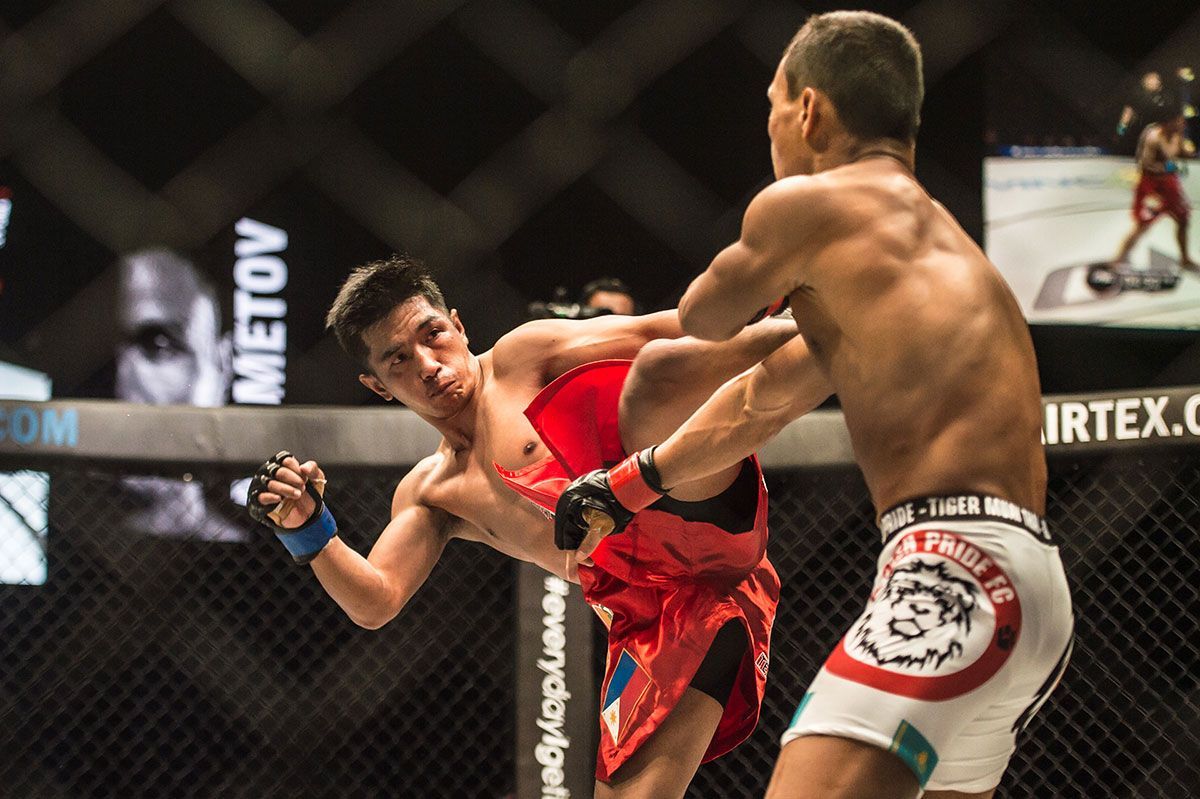 Following his split decision victory over Bunrad in their second encounter back in May 2017, Eustaquio was looking for a top contender in the flyweight division.

While he patiently waited, Akhmetov returned to the organization in August 2017 after spending a year and a half recuperating from a disastrous back injury. He made his first title defense against then-interim champion Moraes, but “The Kazakh” just wasn’t the same. He moved slower and appeared stiff, ultimately losing the title and taking the first blemish of his career.

The last thing Akhmetov wanted was a long layoff, however. He wanted to erase the pain of defeat as soon as possible, so he immediately accepted a headlining tilt against Eustaquio at ONE: TOTAL VICTORY in September 2017. 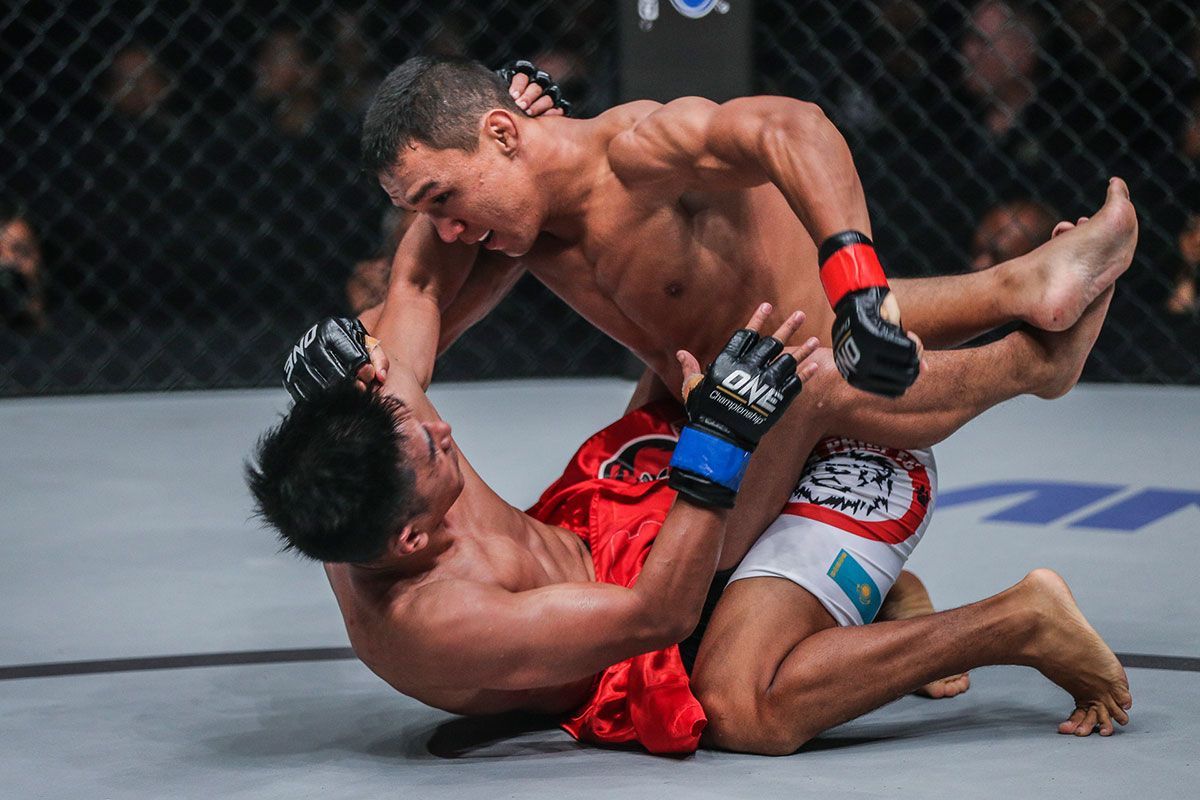 Throughout the tactical three-round affair, Akhmetov mixed his boxing with effective takedowns and stifled much of the Filipino’s offense. But when it was on the feet, Eustaquio’s striking proved to be a tad sharper, and he even ended the match dropping ground strikes on “The Kazakh.”

Akhmetov pulled away with the split decision win, but many felt the night belonged to “Gravity.” Now, with Moraes taking a break from competition, it is time to run the match back, and give the rightful winner the ONE Interim Flyweight World Title. 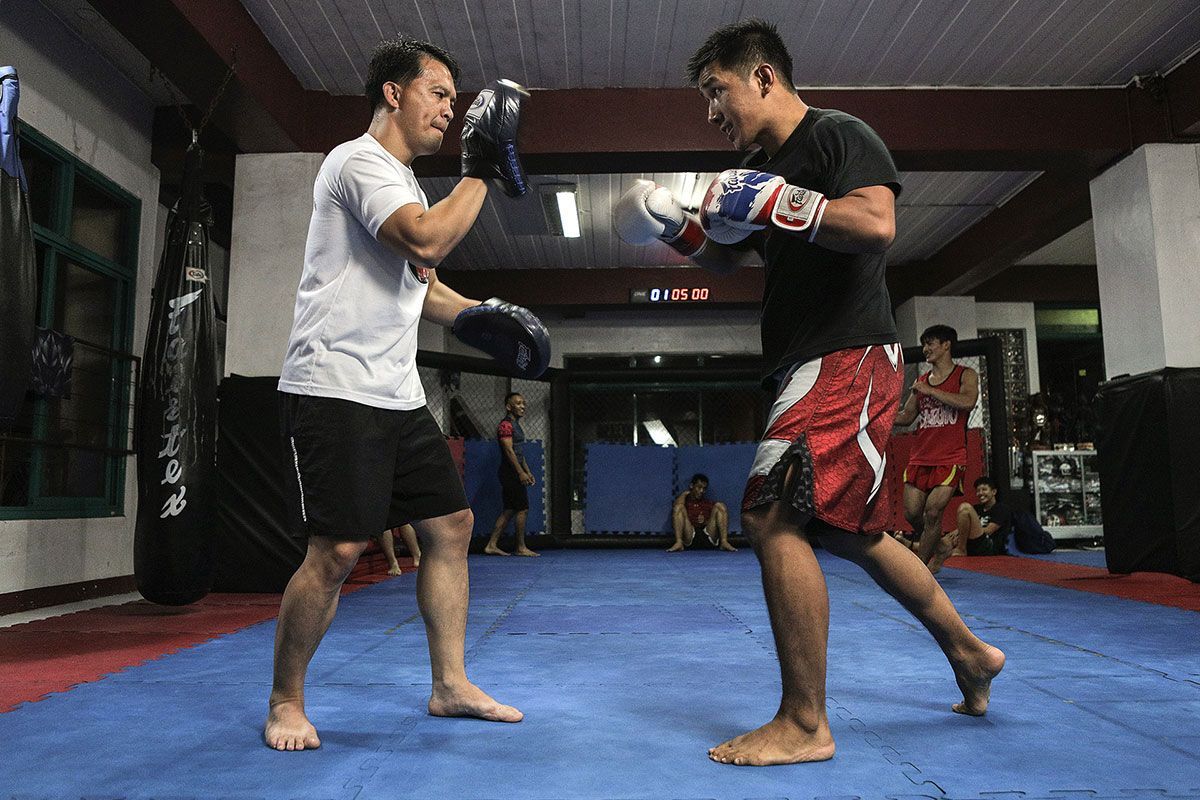 Eustaquio always wanted to be a world champion.

“Gravity” let the opportunity slip through his hands once before, as he lost to Moraes in the inaugural ONE Flyweight World Title match in September 2014. This time, however, he is determined not to let history repeat itself.

After he fell to “The Kazakh” last September, Eustaquio identified the mistakes he committed during the bout.

“I lost focus of the game plan, and allowed myself to operate at Akhmetov’s pace instead of dictating the action on the feet. I also could have had better takedown defense,” he admits.

As the 28-year-old prepares for the main event clash with the Kazakhstani, he is working on his takedown defense and overall ground game. The Filipino is confident in his striking, and will attempt to deploy it a little bit more during their rematch. 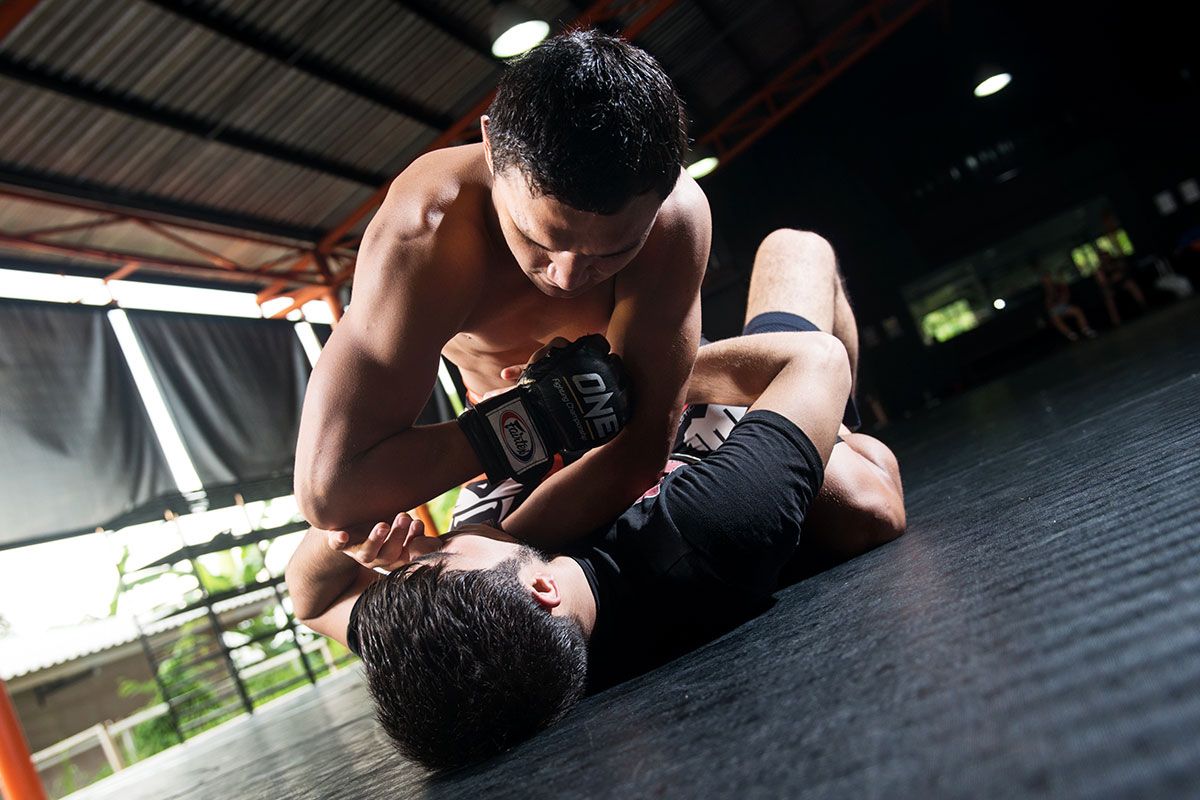 For Akhmetov, the pressure is on.

The 30-year-old is stepping onto his opponent’s home turf with a point to prove. He wants to show the world, especially Filipino fans, that the split decision victory over their countrymen was rightly deserved. Beyond that, he wants to be even more dominant and get a definitive stoppage win.

“I am ready for everyone that will cheer against me. I am coming with the mentality that it will be me versus the world, and I am ready for it,” he states.

Akhmetov also has a few things working in his favor: he has had more time to let his body recover, and enjoys the full benefits of an eight-week training camp. Furthermore, he is looking to show some new tricks from his arsenal. Though he admits Eustaquio did not showcase everything he can do in their last match, he is quick to add that he hasn’t either. 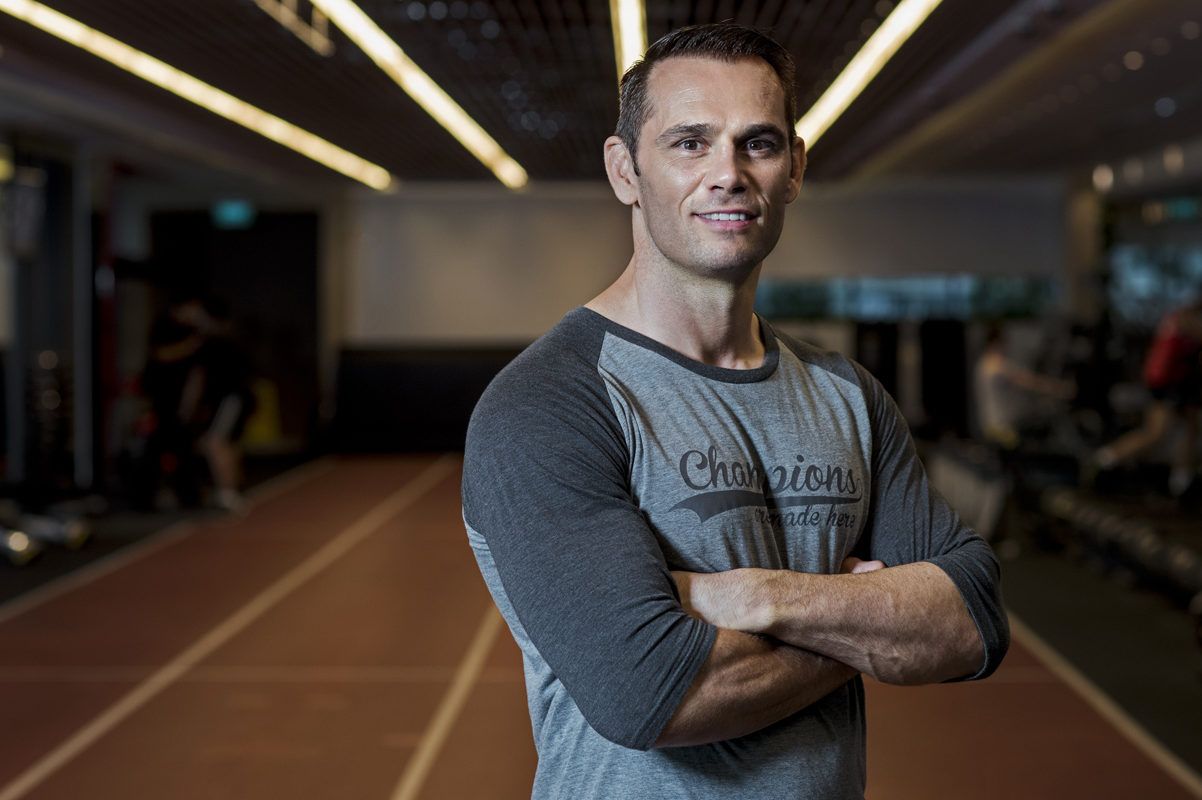 The pace and ferocity both of them bring to the cage gets me most excited about this match-up.

In order for Akhmetov to be successful again, he needs to continue pressing, and not allow Eustaquio to settle into a groove on his feet. Akhmetov needs to keep the Filipino guessing between his stand-up and takedowns, but ultimately press to take matters to the mat.

As for Eustaquio, he needs to defend the takedown and let his hands fly.

Akhmetov vs. Eustaquio II is an intriguing rematch, and throwing the interim belt in there makes it ever so more. Both will be going into the match knowing what each other is bringing to the table.

I think the one who brings it best will walk out with ONE Championship gold.

This rematch should be a good one.

Eustaquio, however, looked sharp in the first match. He showed good striking and head movement. His grappling gets better every match, but he will need to stop Akhmetov’s takedowns, keep him on the end of his jab, and use push kicks to win.