This redemption bout meant everything to him, and he made it count.TV: Check local listings for global broadcast | PPV: Official Livestream at oneppv.com

Knowing what could be at stake for the victor, former ONE Flyweight World Champion Kairat Akhmetov stepped into the cage opposite top contender Geje “Gravity” Eustaquio of the Philippines looking to make a statement.

The two combatants squared off in the main event of ONE: TOTAL VICTORY, which took place in Indonesia’s Jakarta Convention Center late Saturday, 16 September.

It was a close contest all throughout, as Akhmetov showcased his world-class Greco Roman wrestling chops against a lively opponent in Eustaquio. In the end, two of the three official judges saw the bout in favor of “The Kazakh,” who left with a split decision victory for his efforts. The bout was evidently well-matched from the beginning, as both warriors put their best offense on display. Eustaquio, who would exhibit his usual calm and collected striking technique, operated behind his famous Team Lakay wushu stance. Akhmetov would try to strike with him, and even landed some flashy kicks, but it was obvious that the Filipino owned the advantage on the feet.

Tactically, Akhmetov inevitably brought the action to the ground with his takedowns, working on ground and pound from top position. In a controversial sequence towards the end of the first stanza however, Eustaquio would connect on two upward kicks, the second of which would rattle his rival.

Referee Yuji Shimada called a timeout to check on Akhmetov after he failed to recognize the kick as a legal move, but would resume the bout shortly thereafter. 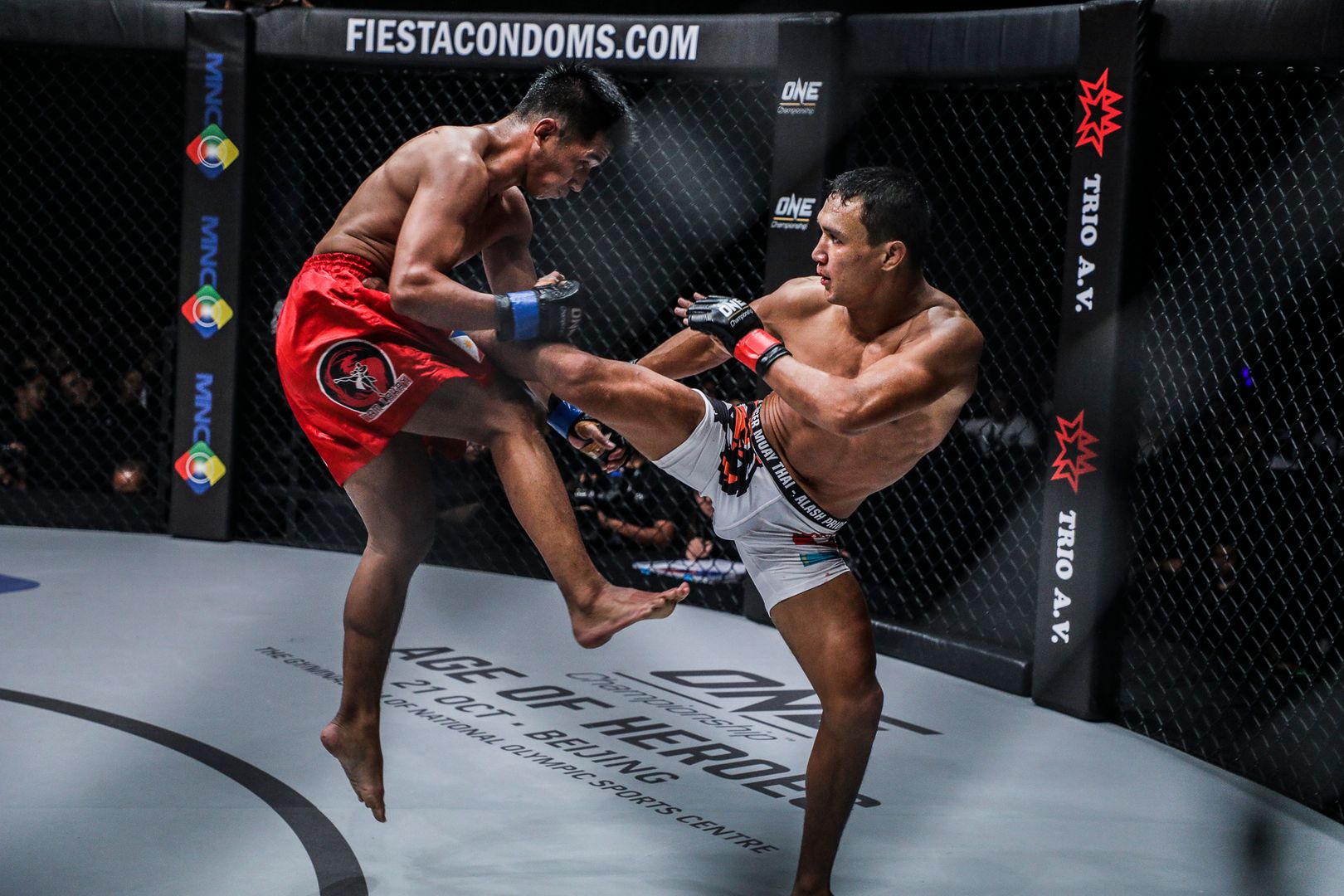 In round two, “The Kazakh” had fully recovered, and continued to put the pressure on Eustaquio, who exuded confidence on the back foot. Eustaquio, timing Akhmetov’s high kick, landed a pair of stiff right hand counters to do damage. Akhmetov, on the other hand, would continue his stifling wrestling game, and went on to successfully execute two more takedowns.

Finally, in the third and final round, both competitors made a case for victory. Akhmetov caught a careless “Gravity” coming in with a beautifully-timed left hand to drop the Filipino to the canvas, but he was unable to capitalize.

As “The Kazakh” followed Eustaquio to the ground, the Team Lakay stalwart would be able to recover and prevent further damage. This is when he was able to take Akhmetov down himself, winding up in top control as the final bell sounded. 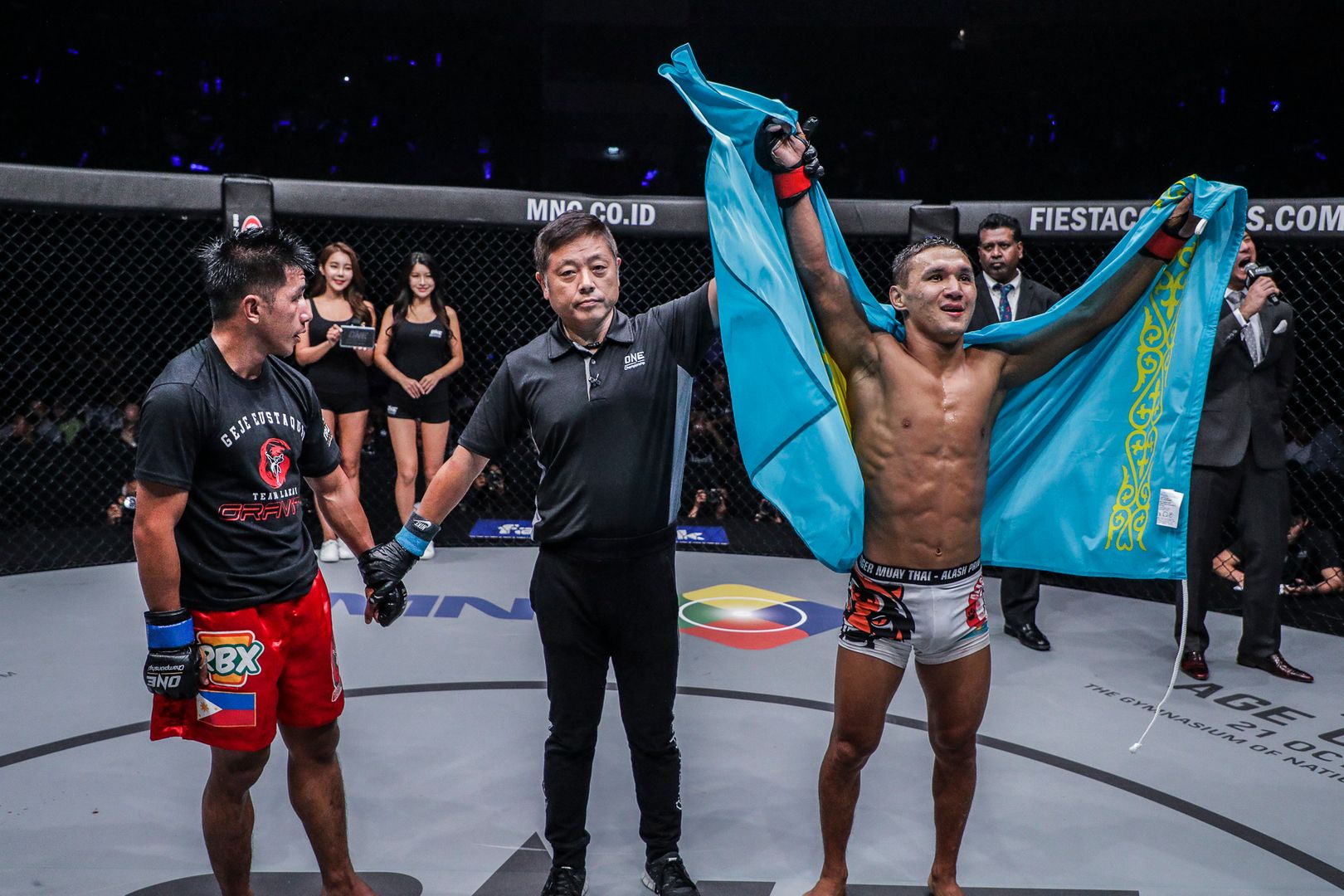 It was an incredibly close contest, one that could have gone either way as evidenced by the split verdict. Both Akhmetov and Eustaquio had been looking to use this bout as a springboard to another showdown with reigning ONE Flyweight World Champion Adriano Moraes, who just reclaimed his title from Akhmetov in early August in Macao.

Was the Kazakhstani’s victory enough to earn him another shot at ONE Championship gold? We will just have to wait and see. Perhaps a rematch between the two would be better suited to settle the matter.

With the victory, Akhmetov improves his overall record to 24-1, while Eustaquio slides to 9-6.