The 24-year-old from Bangkok, Thailand, will make his promotional debut on Saturday, 22 September. He faces “The Funky Drummer” Fabrice Fairtex Delannon (55-10) in a Muay Thai bantamweight bout at ONE: CONQUEST OF HEROES, which takes place at the Jakarta Convention Center in Indonesia.

Although he has competed in Muay Thai’s most prestigious stadiums, he is thrilled to finally test his skills in front of the largest audience he has ever had the pleasure of performing for.

“ONE Championship is such a massive platform,” he says. “I’m excited to showcase my skills to the world.”

From The Couch To Competition

Before he became a six-time Muay Thai World Champion, Yodpanomrung was a young 8-year-old who played far too many video games for his father’s liking.

One day, his dad, a school bus driver in Bangkok, had seen enough, and took his young son to a local Muay Thai gym.

He wanted his child to be healthy, strong, and stay away from gaming, which was eating up all his time and focus.

It only took one month of training before the young Thai’s natural talent merged. What started as an outlet for exercise quickly transformed into something more, and he bravely stepped between the ropes at a local temple fair for his first bout.

Taking the name Yokpetch Wor. Sanlaan at the time, he won by knockout, and his career began.

As he recognized he was not yet ready to compete in Bangkok’s famous venues, he jumped into the gym’s pickup truck and left the city in search of match-ups around the region.

Going by the nickname “Bok,” he made the rounds through central Thailand, competing across provinces to gain experience.

The trips were long and tiring.

Sometimes, he would return home at 5am, only to get ready for school that same morning. For his parents, education always remained the top priority, but as long as “Bok” performed well academically, he could continue his developing Muay Thai career.

“It was like that for many years,” he says. “It was tough, but the love of the sport kept me going.”

Yodpanomrung’s experiences gave him the foundation he needed to become successful at the highest level.

While he was at the Sor Tawanrung gym in the Bang Kapi District, Yodpanomrung had his first taste of Muay Thai’s most prestigious stadiums.

He competed at Rajadamnern Stadium and earned 5000 baht (approximately USD$150) for his bout. He stayed with the gym for a decade, picking up both an Omnoi Stadium championship and a WMPF title in the process.

During those precious years of his adolescence, in which most boys his age live carefree lives “Bok” was competing multiple times every month.

It was 10 years of hard work and dedication – traits he learned from his parents, who had moved from the impoverished northeast region of Thailand to Bangkok when their son was a baby in search of a better life.

The four of them, including Yodpanomrung’s younger brother, lived in a small apartment they rented. His mother and father held full-time jobs, but balanced their schedules to raise their children on their own.

Seeing the sacrifices his parents made for the family made his own sacrifices seem small in comparison.

“When they first left Isaan, life was very difficult for them, but their resilience, work ethic, and dedication to our family eventually paid off,” the Thai recalls. “We later had a comfortable life in Bangkok.”

From that moment, his hard work had to go up a level, as he packed his bags and moved into the Jitmuangnon Gym in Nonthaburi.

Training sessions were arduous. “Bok” pushed his body to its limit by training six hours every day, and competed approximately every three weeks.

After the matches, he would get just a few days off before he started training again.

Yodpanomrung picked up an additional four belts, an incredible feat in Thailand where there can be scores of athletes with top-class talent in a single division. This includes two belts in different weight classes at the Channel 7 Stadium, the prestigious Thailand Title, and a WMC World Title.

He became an elite competitor known as a Muay-Saen in Thailand – an athlete who makes more than 100,000 baht (approximately USD$3,060) per bout.

Now, he will make his ONE Championship debut, and face one of the biggest challenges of his Muay Thai career when he meets Delannon at ONE: CONQUEST OF HEROES in Jakarta, Indonesia.

“I’m really excited for this opportunity. I will not disappoint,” he says. 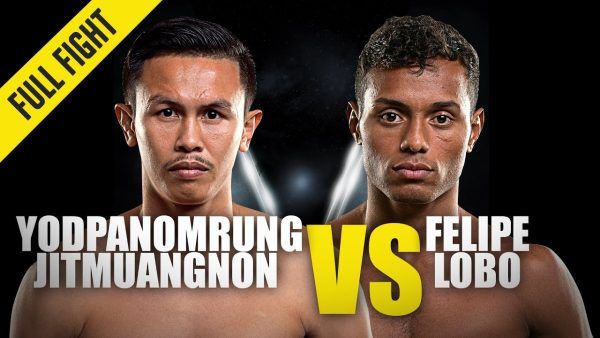