Amir Khan can take a giant leap forward towards ONE Lightweight World Title contention with a win over the in-form Honorio “The Rock” Banario at ONE: BEYOND THE HORIZON.

If the young Evolve MMA standout can defeat the Team Lakay representative in Shanghai, China, he will win his second bout in a row, and crucially, snap one of the hottest streaks in ONE Championship.

Khan’s Filipino opponent is riding the wave of a remarkable five-bout winning run, making him one of the leading names in the weight class. The aim on 9 September is to steal his momentum by handing him his first defeat since October 2015. 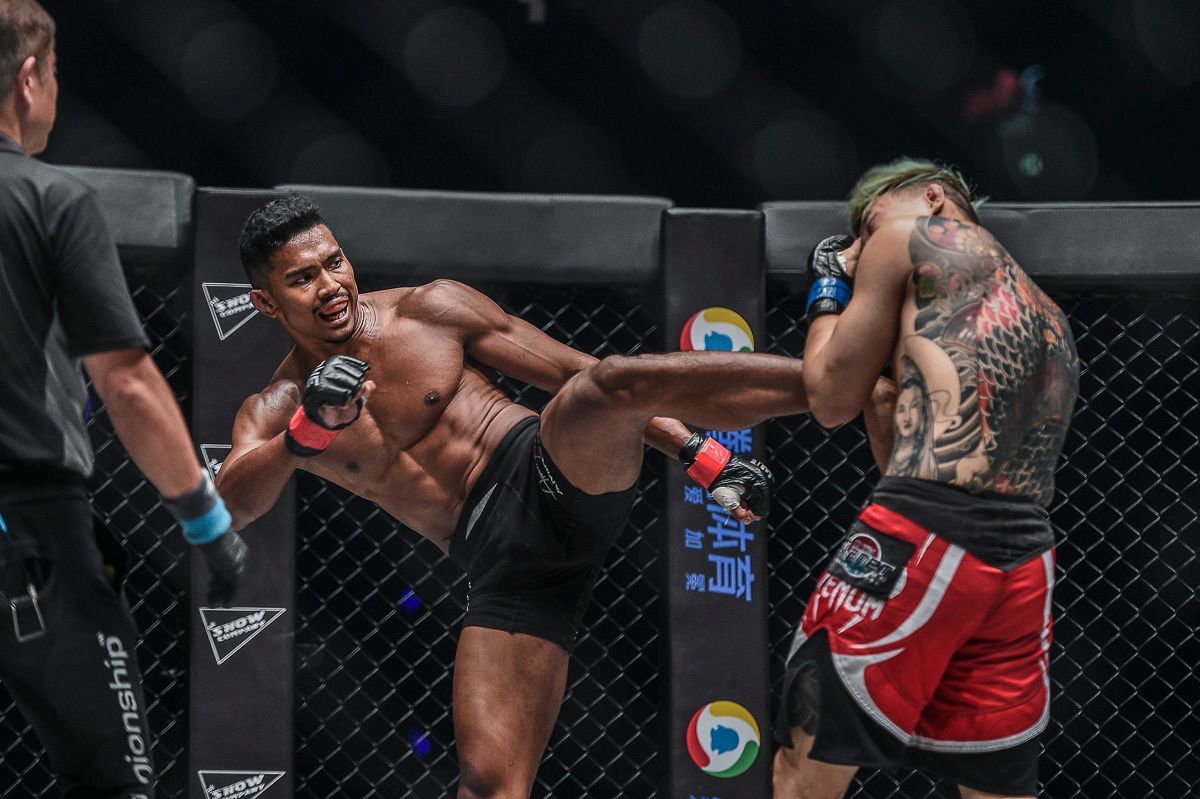 The Singaporean will come into this contest at the Baoshan Arena on the back of a strong performance that was typical of his maturity in the cage – despite his young age.

In May, the 23-year-old defeated Korean submission specialist Sung Jong Lee via TKO, which came halfway through the second round.

Despite his dominance, Khan was made to work for his victory. His opponent somehow managed to survive and threaten with submissions despite a sustained striking attack from the young lion.

That required patience and a careful approach. Khan did not take any risks, and planned his attacks at the right moments to systematically wear down Lee’s resistance until the action was stopped by the referee.

“I knew he was a master in leg locks, but I didn’t expect him to be that tricky, so it threw me off a little,” Khan says. “I adjusted after the first round, and I knew he was gassing out because he was holding onto my leg for dear life.

“I didn’t want to overcommit or be too aggressive. I just wanted to make smart choices, because when a fighter gets too excited, that can cost him the fight. I was being patient, picking shots, and I wanted to showcase my skills to all of the fans.

“I wanted to put him away cleanly. I wasn’t worried too much about a knockout. I just let the knockout come to me. Whenever I saw opportunities, I capitalized on them.”

After a hard-earned ‘W’ in his homeland, the Singaporean Muay Thai champion had earned a two-week break from hard training. Instead, he immersed himself in leg lock research to make sure he would be more comfortable the next time he faced a similar challenge.

It is a mark of the young lion’s commitment to his mixed martial arts career that he spent hours watching John Danaher videos, consulting his BJJ black belt instructors at Evolve MMA, and drilling with teammates when he could have been relaxing or blowing off steam. 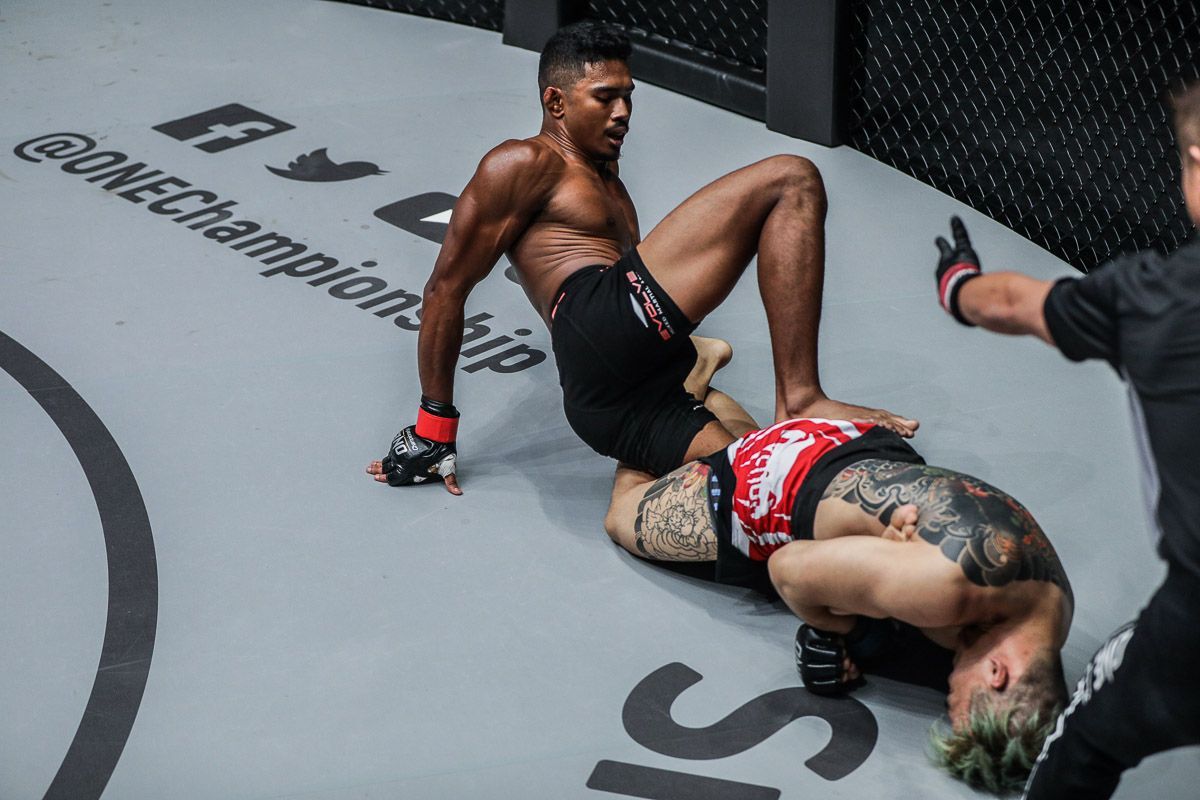 As luck would have it, he is unlikely to need much of those new skills when he faces Banario, who, like his colleagues at Team Lakay, is best known for his stand-up.

That is reflected by the sounds of leather being pounded within the walls of Evolve MMA right now, with a new figurehead guiding the athletes.

“We’ve been focusing a lot on striking and mixing up my mixed martial arts game,” Khan explains.

“Every day, we’ve been working on throwing every shot with 100 percent intent, because in the last few years, I’ve been working a lot on footwork, movement, and changing my stance to different angles. Now, I’m combing both, so I’m working my power and movement together.

“I’ve been training with Eduardo Pamplona. He’s really tough. He takes me into deep waters every day, so mentally, I feel really strong.”

Khan would be just as diligent in his preparation for any opponent, but he does not need any reminder of how crucial his efforts are for Banario.

The former ONE Featherweight Champion is a man Khan knows and respects. The Singaporean had watched Banario before he became a professional martial artist, and recognized his skill.

However, he believes the 2018 version of “The Rock” exceeds the iteration that tasted gold more than half a decade ago, but that is the kind of test he wants. It is also the kind of opponent that will help make his next match-up a thriller for the fans.

“I’m honored to face him at his peak,” Khan says. “I want to show the world I can dominate him during his peak. That’s my goal for this fight.

“I think it’s a really good match-up, because both of us are known for having exciting fights, and I feel our styles will create an exciting fight. 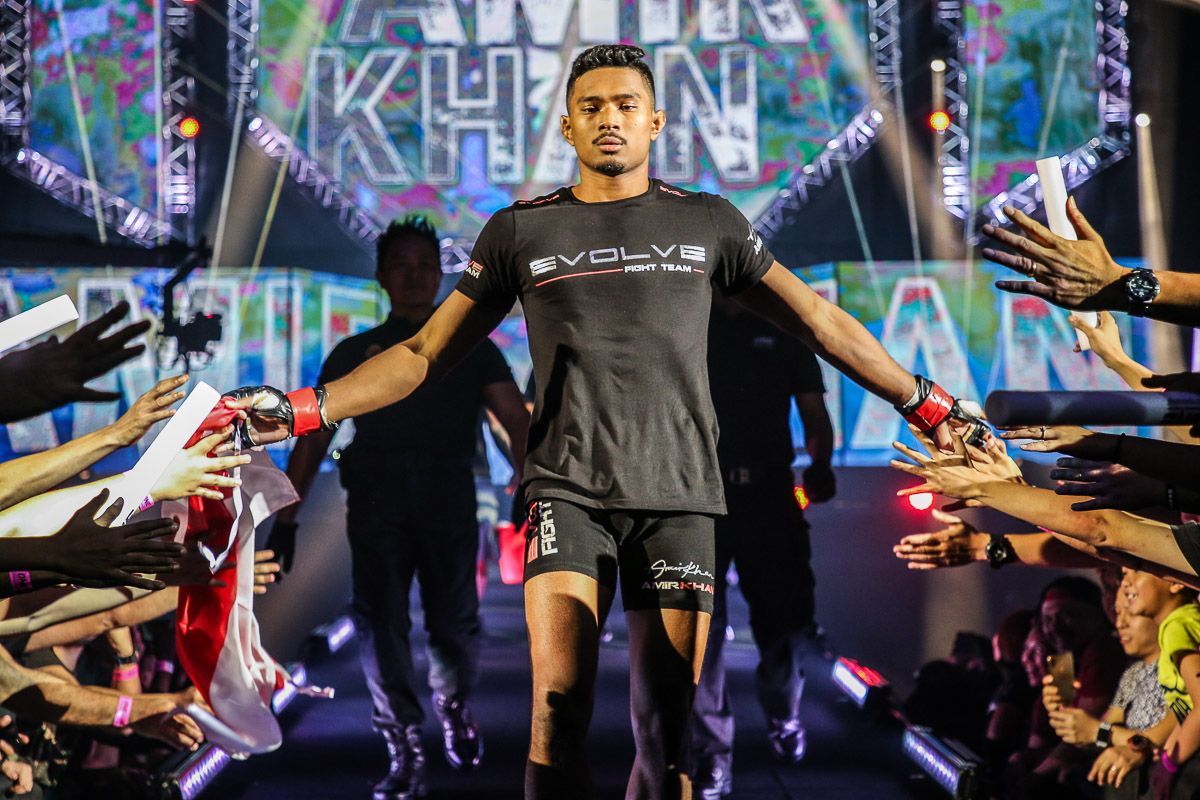 Despite his reverence for his rival, he is confident and sees a clear path to victory.

“I feel I’ll use my long-range kicks, and when the opportunity comes, I’ll catch him with a hook or cross. If he doesn’t fall down, I’ll take him down and soften him up a bit.

“He likes to duck his head, so when I throw combinations, I can catch him with a knee. I always see it, like when he fought Adrian Pang. He ducks his head low, so the knees will be there to catch him.”

Connection with a powerful, decisive strike is what the 23-year-old believes he needs to be noticed in the crowded lightweight title picture. 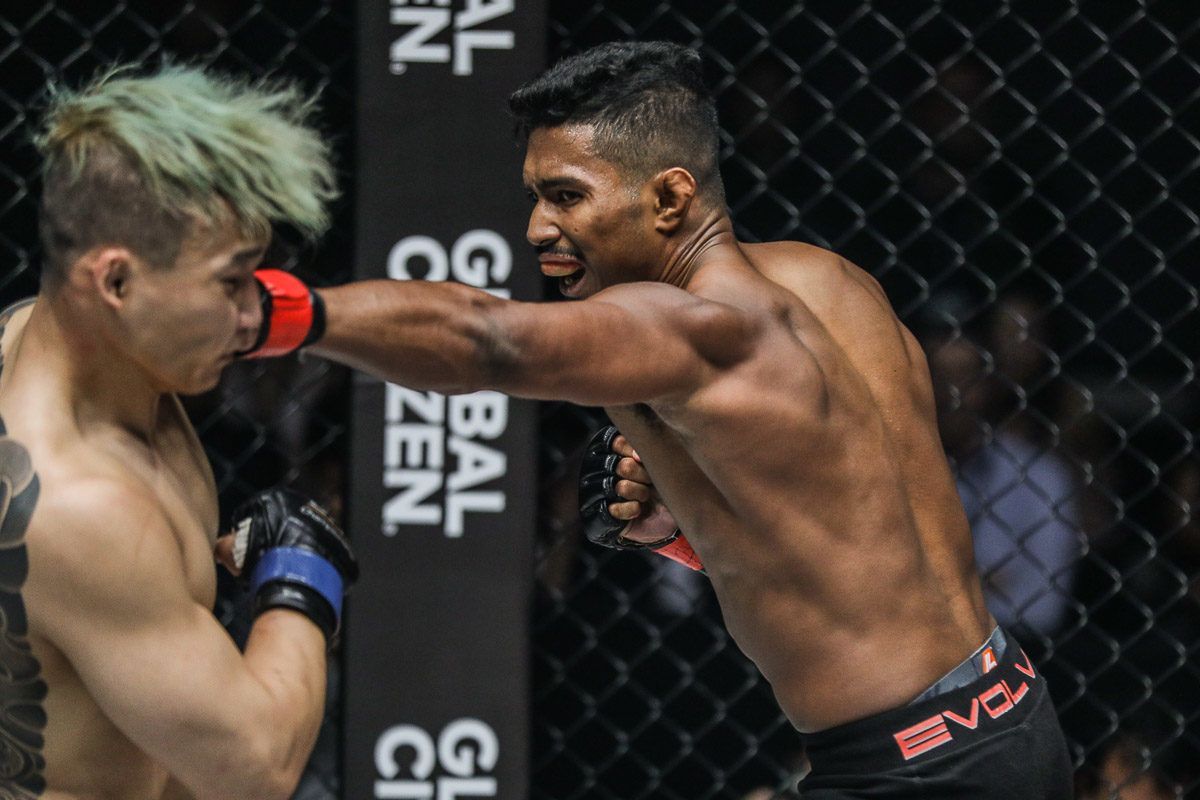 It would take something special to stand out from the crowd.

“I feel like I can’t just win. I have to dominate and finish him within one or two rounds to put me up there, and show I’m ready for the top,” Khan explains.

“I need to show the fans – like how Shinya dominated Shannon (Wiratchai). I need to have that kind of dominant performance, then I believe the fans won’t doubt me, and it will put me right there.

“That’s the goal, and that’s the mindset I’ve been working on in every session. I’ve been visualizing putting him away.”

Though he admits other athletes are in front of him in the queue to face two-division ONE World Champion Martin “The Situ-Asian” Nguyen, if injuries or timing work in his favor, he will be prepared to answer if ONE matchmakers call.

“I’ll be ready, 100 percent,” he says. “I’m training for the ONE Lightweight World Championship, so I just need to show it in the Banario fight, then I’m ready anytime.”