At ONE: A NEW ERA, a rubber match for the ages will go down between two of the pound-for-pound best athletes on the ONE Championship roster.

Kevin “The Silencer” Belingon will defend his ONE Bantamweight World Title for the first time against the man he won the belt from in a rematch – Bibiano “The Flash” Fernandes.

For the first five years of his career in The Home Of Martial Arts, Fernandes was undefeated with victories in nine World Title bouts. However, his record-breaking reign came to an end in November via close split decision at the hands of his Filipino rival.

Never one to be deterred by a setback, the Brazilian will look to reclaim the belt when he faces Belingon in an epic trilogy scheduled for ONE’s historic debut card in Tokyo, Japan on 31 March.

Fernandes will be champing at the bit to get his title back and avenge his loss, and he has plenty of reasons why he can get it done.

#1 His Defeats Do Not Come In Pairs Throughout his career, Fernandes has not tasted defeat very often, and it is even rarer that he has suffered in back-to-back contests.

To find the only occasion when that happened in his career, you have to go all the way back to 2007.

Those were the second and third bouts of Fernandes’ mixed martial arts career, and they came against established veterans Urijah Faber and Norifumi “KID” Yamamoto.

Since that time, Fernandes has only tasted defeat on two separate occasions, and he has never suffered consecutive losses again.

#2 His Submissions Are Still Dangerous

The first time Fernandes crossed paths with Belingon back in 2016, the match-up ended with a first-round submission when the Brazilian Jiu-Jitsu black belt wrapped up a kimura in the opening round.

For the rematch, Belingon obviously studied his submission defense to stop a repeat result, but that did not keep him out of trouble during the five-round war.

Fernandes came close to getting the finish in the second round after transitioning from the back to an armbar that had Belingon’s limb completely hyperextended. Somehow, Belingon managed to wriggle free despite his arm being contorted in the wrong direction.

In the fourth round, Fernandes nearly latched onto another armbar during a scramble on the mat, but Belingon just managed to slip out again.

Fernandes knows he has the ability to submit Belingon. He has done it before, and their last meeting proved he only needs to make a couple of adjustments to do it again.

#3 He Can Dictate Where The Contest Goes

Though much was made of Belingon’s improved takedown defense ahead of the match at ONE: HEART OF THE LION, “The Flash” showed off some impressive wrestling by putting him on the mat several times.

Fernandes did a tremendous job forcing Belingon to defend his head and body with crisp striking combinations before dropping down to grab onto a well-timed single leg or a double-leg takedown.

Perhaps the best work from Fernandes came in the early part of the contest when he was forcing Belingon to walk backward in the striking exchanges, before then trapping him against the cage.

Once Fernandes was able to slow Belingon down by grinding him against the cage, he was consistently able to pressure forward before eventually dragging the Team Lakay athlete down to the ground.

If Fernandes can be as sharp with his shots in the trilogy match, the reigning champion could find himself in danger again. 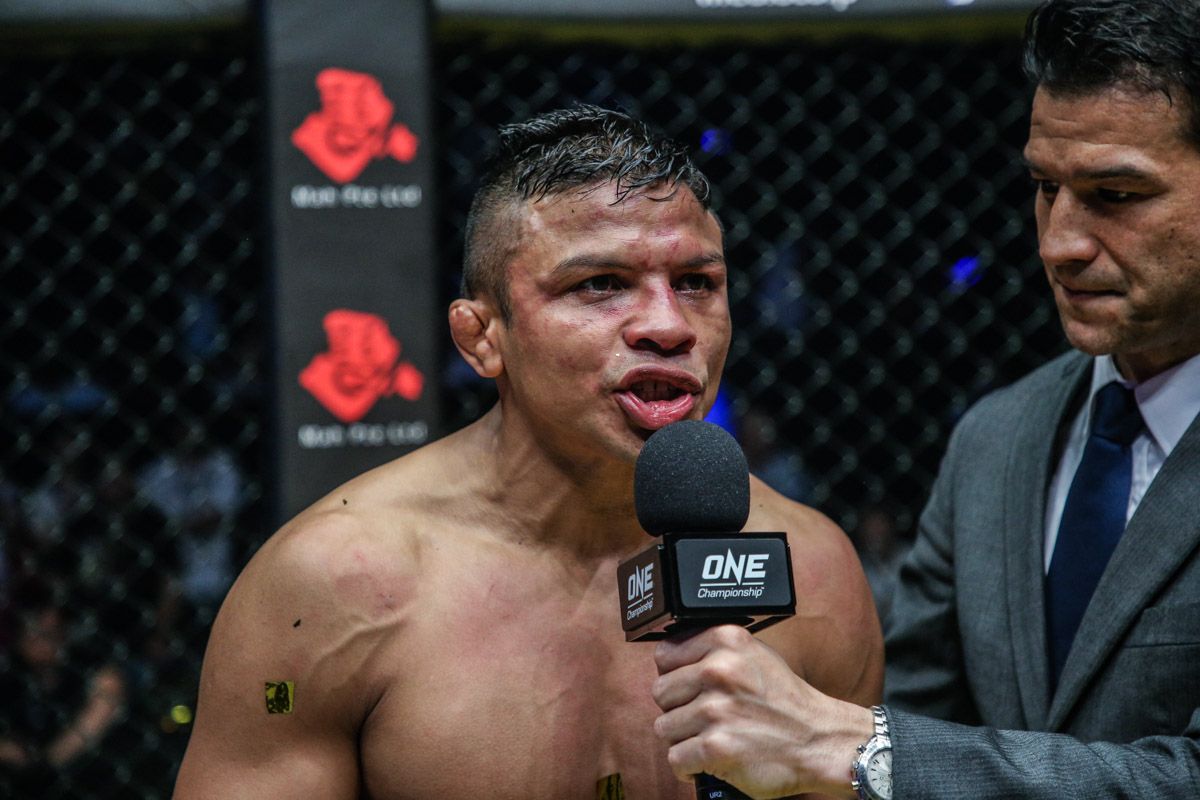 Motivation is a huge key to success for every martial artist, and it is safe to say Fernandes has more than enough drive going into this trilogy with Belingon.

The moment the judges’ decision was read in the last contest, Fernandes shook his head in disbelief that he had lost the bout by split decision.

Fernandes will not have forgotten the heartbreaking moment when he lost the ONE Bantamweight World Title, and now he is on a mission to get it back.

Though there is no doubt he was always motivated to hang onto the belt, he will be more fired up to win back what he believes belongs to him.

#5 Few Athletes Can Be Better Prepared

For the upcoming trilogy contest, Fernandes has a key element of his gym in play he did not have before – Demetrious Johnson.

The last time Fernandes was preparing to face Belingon, Johnson was recovering from an injured foot and knee that kept him unavailable for much of the training camp.

“Mighty Mouse” is healthy now, and he is also preparing for his ONE debut on the same 31 March card, which means he will be a huge part of Fernandes’ preparations.

Johnson is widely considered one of the best pound-for-pound mixed martial artists on the planet, which means he has all the tools to emulate Belingon to help his teammate prepare for his date with destiny.