A spinning knockout in any of its many forms is quite possibly the most beautiful and surprising way to finish a martial arts bout.

The spectacular visual aspect of the move, the skill and timing involved, as well as the sheer force of the strike are simply stunning. Those facts, coupled with the immediate and definitive ending to the battle, makes a spinning knockout an immediate addition to any athlete’s highlight reel.

Here are three of the very best spinning knockouts to have occurred in ONE Championship.

#1 Joshua Pacio Knocks Out Roy Doliguez Via Spinning Back Fist

Wait for that power packed ????

Wait for that power packed ????

Posted by ONE Championship on Sunday, January 7, 2018

It was a battle amongst former ONE Strawweight World Title challengers this past November at ONE: LEGENDS OF THE WORLD in Manila, Philippines. Team Lakay’s Joshua Pacio clashed with Roy “The Dominator” Doliguez in an unforgettable encounter, as both Filipino warriors possessed high level striking skills.

The first round saw Pacio open with a number of powerful right kicks that connected on Doliguez. As the bout hit the floor, the Filipino athletes traded top positions, and Pacio nearly ended the contest with a deep guillotine choke.

Although he was unable to finish, he offered various submission attempts through the opening stanza. 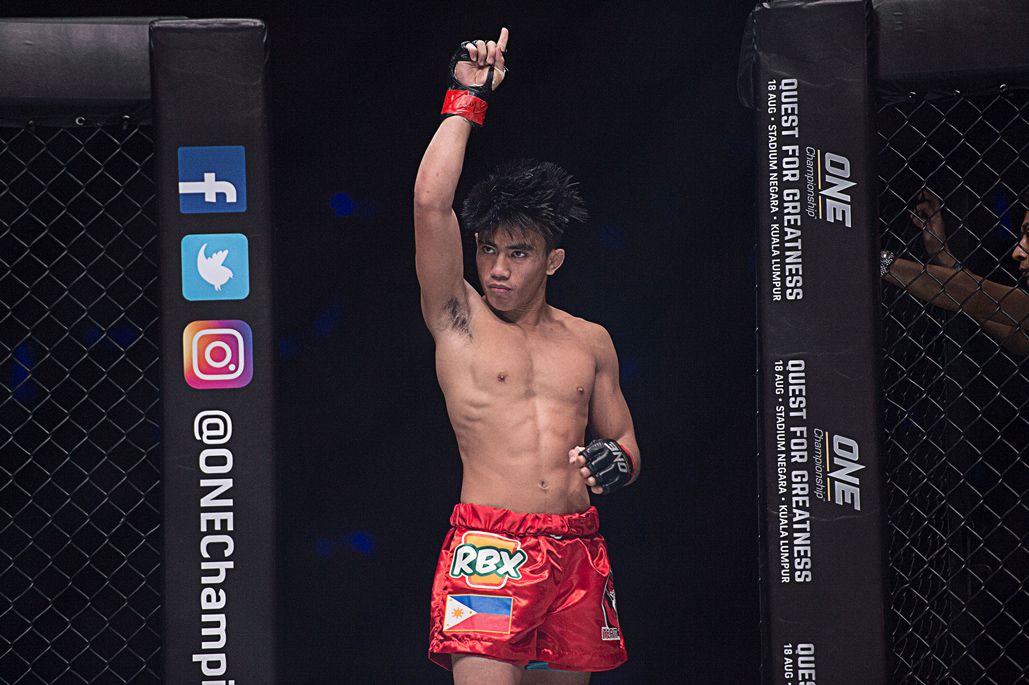 The second stanza opened with the Team Lakay standout beginning to use his arsenal of spinning strikes. After the wushu-savvy Pacio feinted with a low kick, he followed up with a picture-perfect spinning back fist on his unsuspecting opponent.

Doliguez had dropped his defenses to deal with the low kick when Pacio struck. It landed flush, and Doliguez hit the canvas as the referee immediately stepped in to call off the contest.

Pacio will undoubtedly throw more spinning attacks on Friday, 26 January, as the promotion returns to the Mall Of Asia Arena for ONE: GLOBAL SUPERHEROES. He will face Pongisiri “The Smiling Assassin” Mitsatit in the co-main event.

Posted by ONE Championship on Sunday, October 1, 2017

The only factor that can make a spinning knockout finish even more exciting is when it happens merely seconds into the match. This was the case when Filipino rising star Burn “Hitman” Soriano looked to right the wrong of his promotional debut earlier in the year.

Soriano stepped back into the ONE cage looking for redemption at ONE: TITLES & TITANS in August 2016. In his match with Indonesia’s Mario Satya Wirawan, he took very little time getting back on track, as he showed how he earned his nickname.

Wirawan threw a number of leg kicks just prior to Soriano landing the match-ending spinning back fist from out of nowhere. The strike was so powerful that the Indonesian immediately dropped to the canvas. The bout was stopped just 15 ticks into the first round, was the second fastest stoppage in ONE bantamweight history, and earned second-place in ONE’s Knockout of the Year 2016 award.

Four-time Muay Thai and kickboxing heavyweight world champion Alain “The Panther” Ngalani is simply a sight to behold whenever he sets foot in the ONE cage. Every strike the Hong Kong-based hulk throws is with bout-ending intentions.

In his highly anticipated professional cage debut at ONE: CHAMPIONS & WARRIORS in September 2013, he wasted no time throwing a lighting-fast spinning head kick that landed on the temple of his foe, Egypt’s Mahmoud Hassan.

That was more than enough to stun Hassan and knock him to the canvas, where Ngalani immediately followed with ground and pound before the referee waved it off. “The Panther” needed only 31 seconds to gain the victory, which stands as the third-fastest stoppage victory in ONE heavyweight history. He would later set the record with an 11-second one-punch knockout of Hideki Sekine in September 2017.