Bibiano “The Flash” Fernandes’ biggest motivation for an unprecedented fourth battle with Kevin “The Silencer” Belingon is a commitment to the ONE Championship fans.

The ONE Bantamweight World Champion regained the belt in his rubber match with his Filipino rival at ONE: A NEW ERA, but the Brazilian was not happy with the way the bout ended.

The Team Lakay representative was disqualified because of an inadvertent foul, which left many fans without a sense of closure.

With them at the forefront of his mind, Fernandes agreed to meet Belingon one more time at ONE: CENTURY PART II in Tokyo, Japan on Sunday, 13 October, to put a stamp on the most compelling rivalry in ONE history, and leave no doubt about the division’s true king.

“A lot of people want to see this fight. That’s the reason. The fight is [not] for me, it’s for the fans. I give this fight for the fans – for you guys!” Fernandes asserts.

“If the [third] fight didn’t end [in that way], I would not care about Kevin anymore, but I believe a lot of Filipinos are not happy. A lot of people want to see the fight.

This does not mean that the former Brazilian Jiu-Jitsu World Champion is taking his Filipino rival lightly, however.

Although “The Flash” submitted “The Silencer” in the opening stanza of their first contest in 2016, the Team Lakay man got redemption at the end of a thrilling five-round split decision when they rematched last November. The man from Ifugao, Philippines also had a lot of success with his striking before he surrendered the belt a few months ago.

When they square off on 13 October, they will have already shared the Circle for more than 42 minutes. Fernandes has seen and felt the improvements in Belingon’s game over time, so he knows he will have to be at the top of his game to defeat him convincingly.

“Kevin is a good challenge. I like that. He has his skills. He throws the right hand, he throws a [fast] kick. Those are the skills he has,” offers the 39-year-old.

“Because of this, I have to be very smart with the way he fights. He’s a good athlete, but I think I am better than him. For sure, I am!”

There would be no better way for the Brazilian Jiu-Jitsu black belt to bring this series to a close than with a finish, and surprisingly, he thinks he could do that with something other than a submission.

“You know what? I’m so glad of the number four, because I keep improving my stand-up against Kevin. I know if I have patience, I can finish him,” he adds.

Through his time spent in action against “The Silencer,” Fernandes feels like he has formulated the perfect game plan to thrill the fans and leave the Ryogoku Kokugikan with his hand raised.

However, he believes it takes two to tango when it comes to putting on a memorable contest, so he has challenged his rival to step up and meet him in the center of the Circle so they can put on a show that no one will forget.

“The reason you and me are here right now is to bring the show for the fans. Let it be the best fight of the night,” says “The Flash.”

“I will go to you, and you come for me. I’m okay with you punching me – I have no problem with that – but come to fight! Don’t try to run. I’ll be there waiting for you. Let’s do it. I believe the fans will love it.” 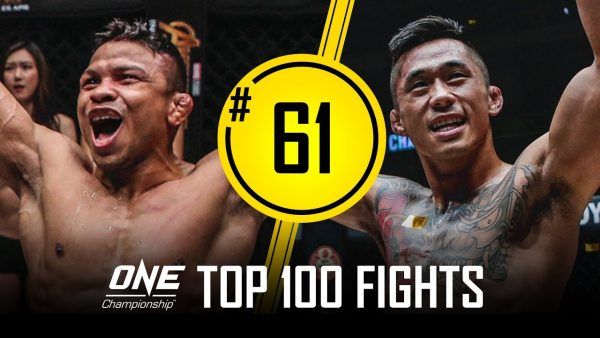