Victoria “The Prodigy” Lee has taken the mixed martial arts world by storm in 2021, and the 17-year-old atomweight will look to record her third straight victory at ONE: REVOLUTION on Friday, 24 September.

That evening, the Singaporean-American phenom will open the main card against undefeated Brazilian star Victoria “Vick” Souza in “The Lion City.”

Of course, “The Prodigy” won’t be the only member of the Lee family competing at ONE: REVOLUTION. Her older brother, Christian “The Warrior” Lee, will defend his ONE Lightweight World Title against #3-ranked contender Ok Rae Yoon in the main event.

In this exclusive interview with onefc.com, Victoria talks about her upcoming opponent, sharing this experience with her big bro, her teenage life outside of the Circle, and more.

ONE Championship: You spend a lot of time with your sister Angela Lee and your brother Christian, but as a new aunt, how often do you see your baby nieces?

Victoria Lee: I think that it’s so awesome that I get to see the babies come into the gym every day, and they really just lift everyone’s moods.

ONE: What’s been your favorite moment so far with watching the babies grow? What has cracked you up?

VL: Honestly, these babies are so smart. They’re doing things that I don’t even think [other] four-month-old babies are doing. But both Ava and Alia have used the bathroom on an actual toilet, like a miniature toilet. And it was just the funniest thing to watch. They’re so adorable.

ONE: You’ve begun your senior year of high school. How’s that been going, and has it been difficult juggling your studies with training?

VL: Going into my senior year, they decided that it’s not going to be [virtual] learning anymore. So we go to school, but we wear a mask, and in class, it’s six feet apart.

Having to juggle school and training isn’t so bad. Similar to my first fight, I was also in school – it was online, but I was able to fit it into my schedule, just like I’m doing for this fight.

ONE: Since you are back to in-person learning, what has been the biggest difference from last year?

VL: In some ways, it feels different having to wear a mask. I mean, you can’t eat in class anymore, which was, like, the only thing that I would do to stay awake. But other than that, it’s just school, you know? Go in there. You learn. Have your homework. It’s just normal.

ONE: What’s been the reaction from friends and teachers to your pro MMA career? Are they tuning in to these bouts and giving you well wishes?

VL: Definitely, my friends are giving me lots of support for all of my fights and for this upcoming fight. They’re really supportive. They are understanding. I’ve competed with them in wrestling tournaments, so they know how it goes, and they’re always supporting me.

ONE: You have said in the past that you like baking. What’s the best thing that you bake?

VL: I like to bake a lot of desserts. I used to bake a cheesecake for each one of my siblings [after their] fights. And I just like to experiment trying out new flavors and stuff.

ONE: What’s been your biggest baking fail?

VL: Oh, there’s a lot, and it’s so embarrassing. One time, I tried to make marshmallows from scratch, and that ended up very poorly. ONE: What were your thoughts on the historic all-women’s card, ONE: EMPOWER?

VL: I think that it was such an awesome card. The buildup for it, it really got everyone pumped. And the card itself was filled with a lot of really exciting matches. I think the results of the quarterfinals were similar to what me and my family had predicted.

ONE: Speaking of the quarterfinals, the winner of the Grand Prix gets a ONE Women’s Atomweight World Title shot against your sister, Angela. Meng Bo and Denice Zamboanga both had strong words for her and lost.

And as for Meng Bo and Denice, I think it’s kind of funny that they were talking so much, kind of just focusing on my sister and not their opponents ahead of them. So, I think it’s ironic.

ONE: How did you feel going into your last match against Wang Luping, both mentally and physically?

VL: Going into my last fight, I felt very prepared. And I felt a lot more calm because I experienced everything in the first camp – kind of the newness of it. And so for my second fight, I was able to just see a little bit clearer, focus on the game plan, and I was able to execute it. And I was really happy about that.

ONE: And how did you feel about your performance? You got a big finish inside the Circle as well as a highlight-reel slam that got a lot of people talking.

VL: I know that there’s still a lot to improve on. But from my first fight to my second, I’ve made so much improvement. And going into my third fight, I’m going to continue improving.

ONE: Where do you think that you’ve made the biggest improvement since that last match?

And I think that is probably the biggest area where I see improvements from my first, to my second, and going into my third fight.

ONE: A unique aspect of your upcoming match is that you will compete on the same card as your brother, Christian. Does that excite you? And how do you address any type of nerves that might come along with it?

VL: I feel extremely excited to be fighting on the same card as my brother. I think it’s going to be so cool to experience the whole fight week with him and watch him warm up in the backroom because I haven’t been to one of his fights in such a long time.

As for dealing with pressure, I don’t feel any more pressure because I’m competing on the same card as him. I feel just the same as if it were just me. And I feel like I’m able to separate that, and my brother is as well. I don’t have to worry about him because I see how hard he trains in the gym every day. ONE: How has it affected training, if at all? Has it added any energy to your camp with both of you competing on the same lineup?

VL: No, it’s kind of just like we have our own two separate camps. My brother does his training session in the morning when I’m at school, I do mine in the afternoon, and then we both come in for the evening session. So, the energy is good. It’s just going to be more exciting now that we’re both on the same card, and I really think it’s fun to be going on the same experience with my brother.

ONE: You’re fighting Victoria Souza. She’s undefeated and a big opponent at this stage in your career. What are your feelings about her?

VL: I have been able to watch some of her past performances. I think that she is a talented fighter, and she is up-and-coming. She’s on a five-fight winning streak.

However, I have faced opponents with better records than me in my debut fight and my second fight. I feel like our styles match up well, and it’s going to be a good fight for me.

ONE: Where do you think that you can exploit her strengths or weaknesses and find your own success?

VL: I feel like my biggest strength is my ability to transition between all the different styles of MMA as a whole, and I feel like I can put that together more seamlessly than her. And that’s how I’m going to come up with the victory. 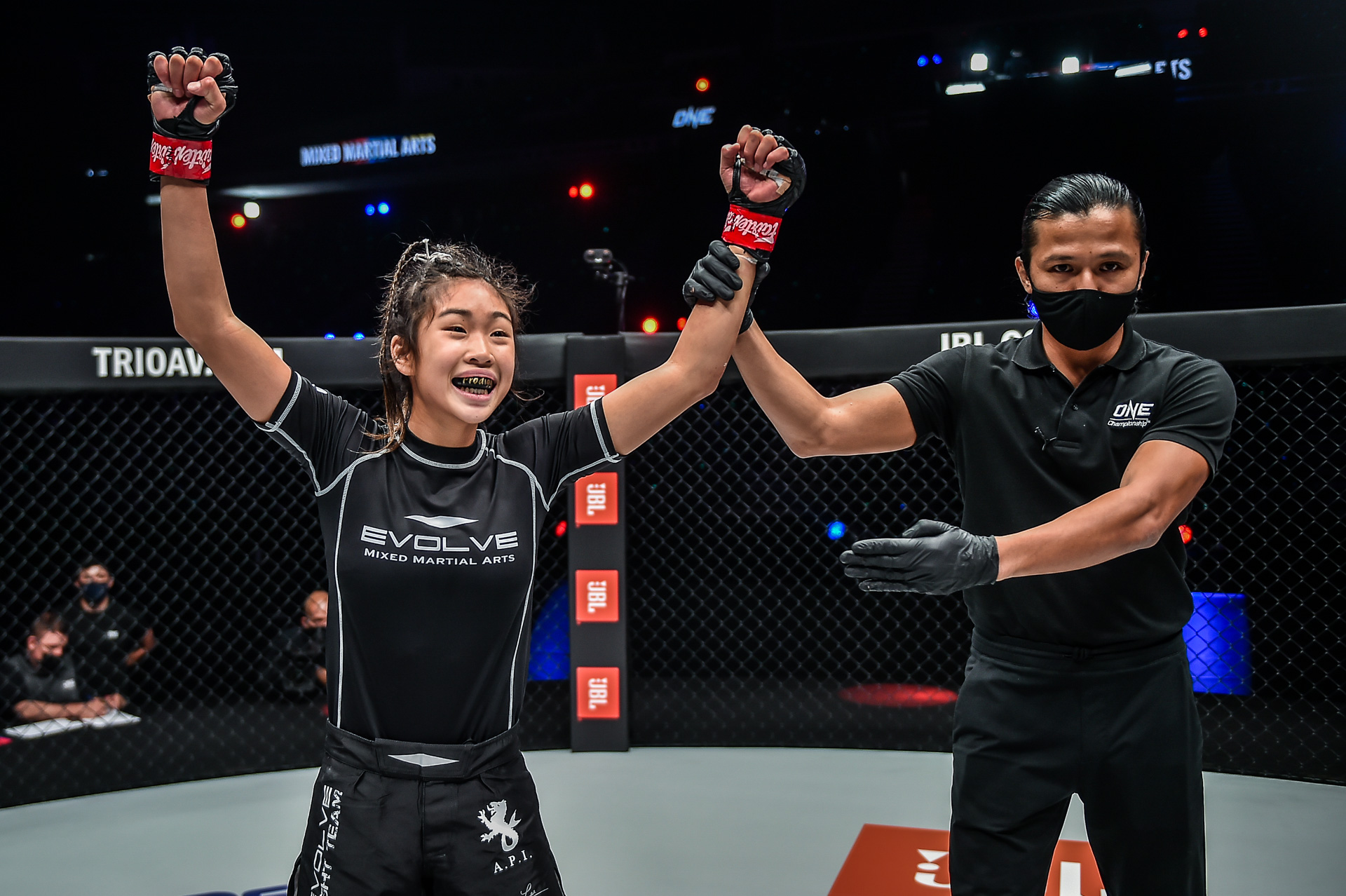 ONE: She has shown her well-rounded abilities throughout her career. She’s got two submissions and two TKOs. Do you think that poses any type of new challenge that maybe you haven’t seen yet?

VL: I think that shows that she’s a finisher, and she’s always looking to finish. So I think that, since that’s similar to my style as well, it’s going to be an exciting fight, and it’s not going to go to a decision.

ONE: Ideally, how would you like to finish this match?

VL: My ideal finish is going to be a first-round submission.

VL: Definitely, I will finish off this year 3-0. And I feel like my actions, my record, and how I perform in my fight will speak for itself against the people before who were negative about my age and being in the sport. But I guess it shows that I have the skills needed to be competitive in this sport. 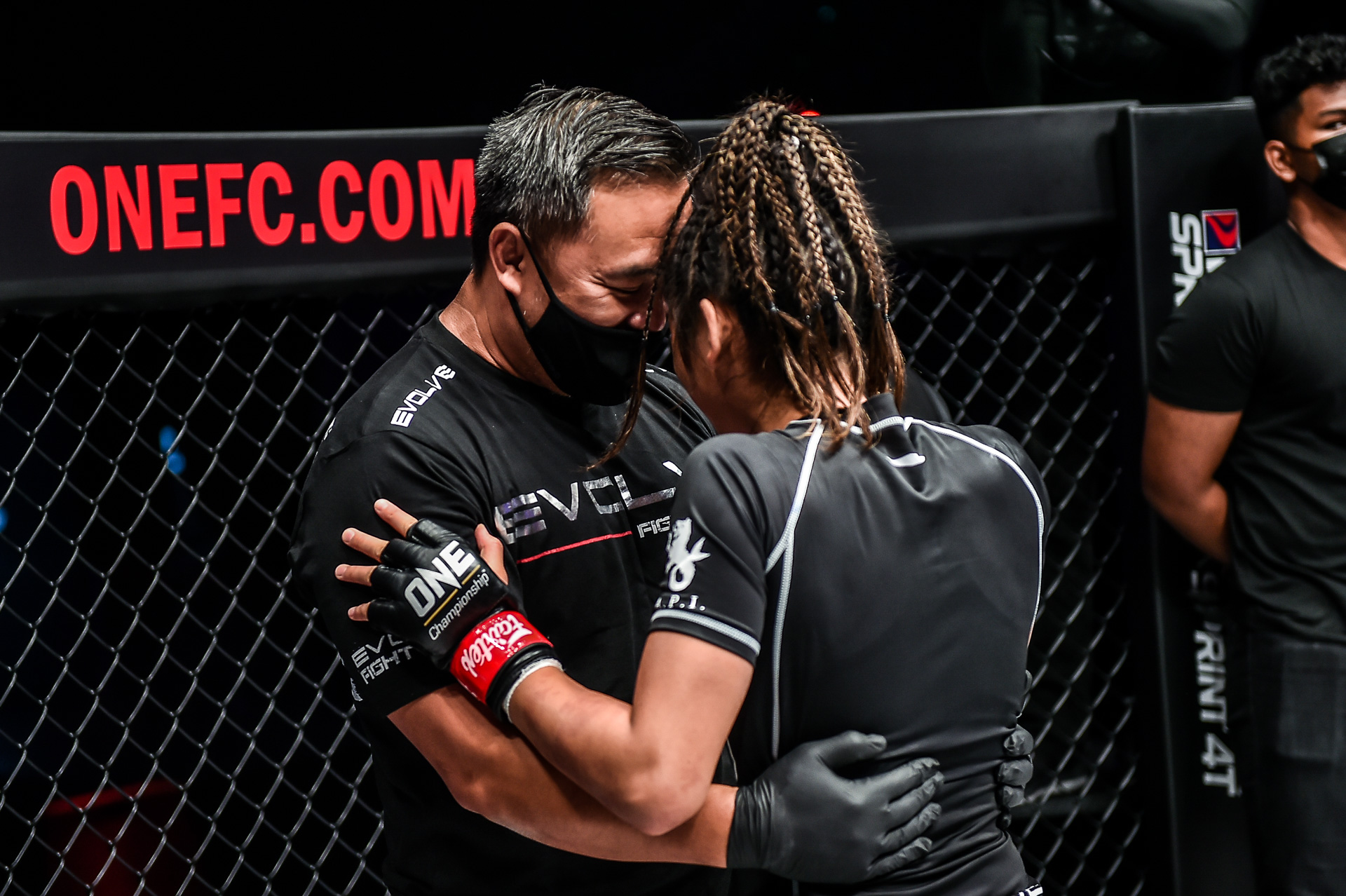 ONE: The atomweight division is hot right now. Where do you think you are at in your own journey, and where do you stand among the other athletes?

VL: My goal is to just always keep upping the level of competition I face each fight, and that’s what I’m doing. Going into this next match, she is a tough, well-rounded fighter, and she has more skills than my last opponent. And right now, that’s all I’m focusing on.

From there, I would like to face another high-level opponent and then another, because I just want to keep improving my game.