Stamp Fairtex could not have put on a much more impressive performance at ONE: DREAMS OF GOLD.

It was no shock that the two-sport ONE World Champion controlled the stand-up exchanges, but she surprised many fans as she also controlled the Indian athlete on the ground in front of her home crowd in Bangkok, Thailand.

“At the beginning, I was thinking of just keeping it standing, but then I wanted to show my coaches and the fans what I have been working on,” she says.

“When I grabbed her to clinch up, I realized that her ground game wasn’t going to be that advanced. I felt a lot more confident after that about taking her down.

“Standing with her, I felt strong, but didn’t think I’d be able to get the knockout. She was really persistent.”

The 21-year-old from Pattaya took her opponent down, controlled the grappling exchanges, and then almost scored an early finish in the first round with an armbar.

Stamp could not quite pull it off, and although she was a little disappointed about that, she was glad to get the chance to get more time in the Circle after her debut only lasted 19 seconds last July in Rich Franklin’s ONE Warrior Series.

She continued to control the action on the feet throughout the second round, but she used her clinch skills to get another takedown in the final period. 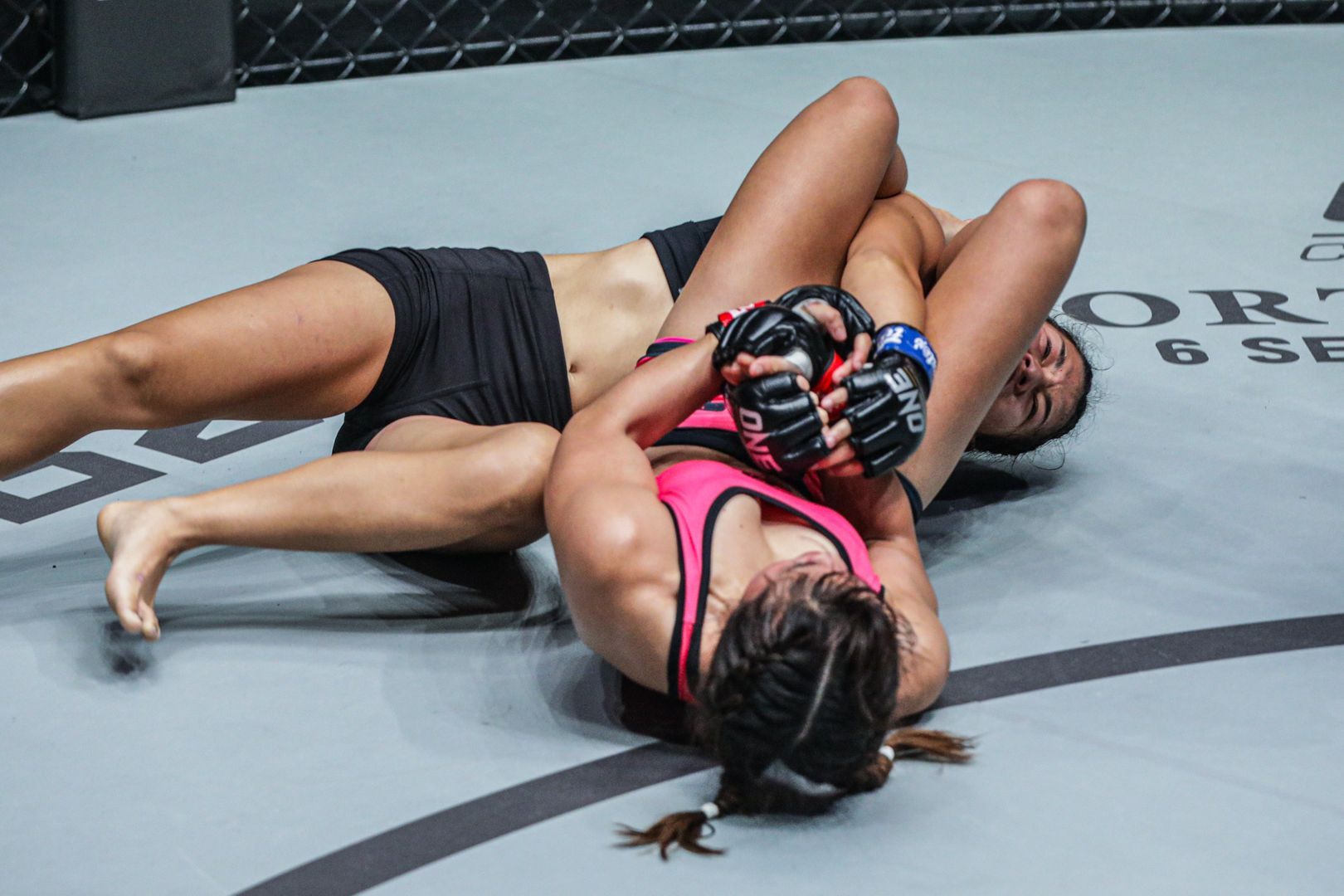 This time, she had no trouble getting the finish as she went to her rival’s back and secured a rear-naked choke at the 1:29 mark of round three to a rapturous ovation from her compatriots.

Although it is only natural that Stamp expects to be better for her next mixed martial arts assignment, she was delighted with what she showed in the Circle.

“It was a really great debut for me. I am happy with my performance and all the experience I was able to gain during this match,” she says.

“I was so excited to get the submission – I didn’t think I would be able to get one. It made me feel really proud of myself. I definitely gained more experience from not getting the finish in round one, and learned more by attempting a different submission.

“Moving forward, I definitely need to work more on my ground game. My stand-up is already very strong. After the fight, I went and asked my coach about areas to improve.”

The native of Rayong province was also pleased about her mindset for this test on the global stage. 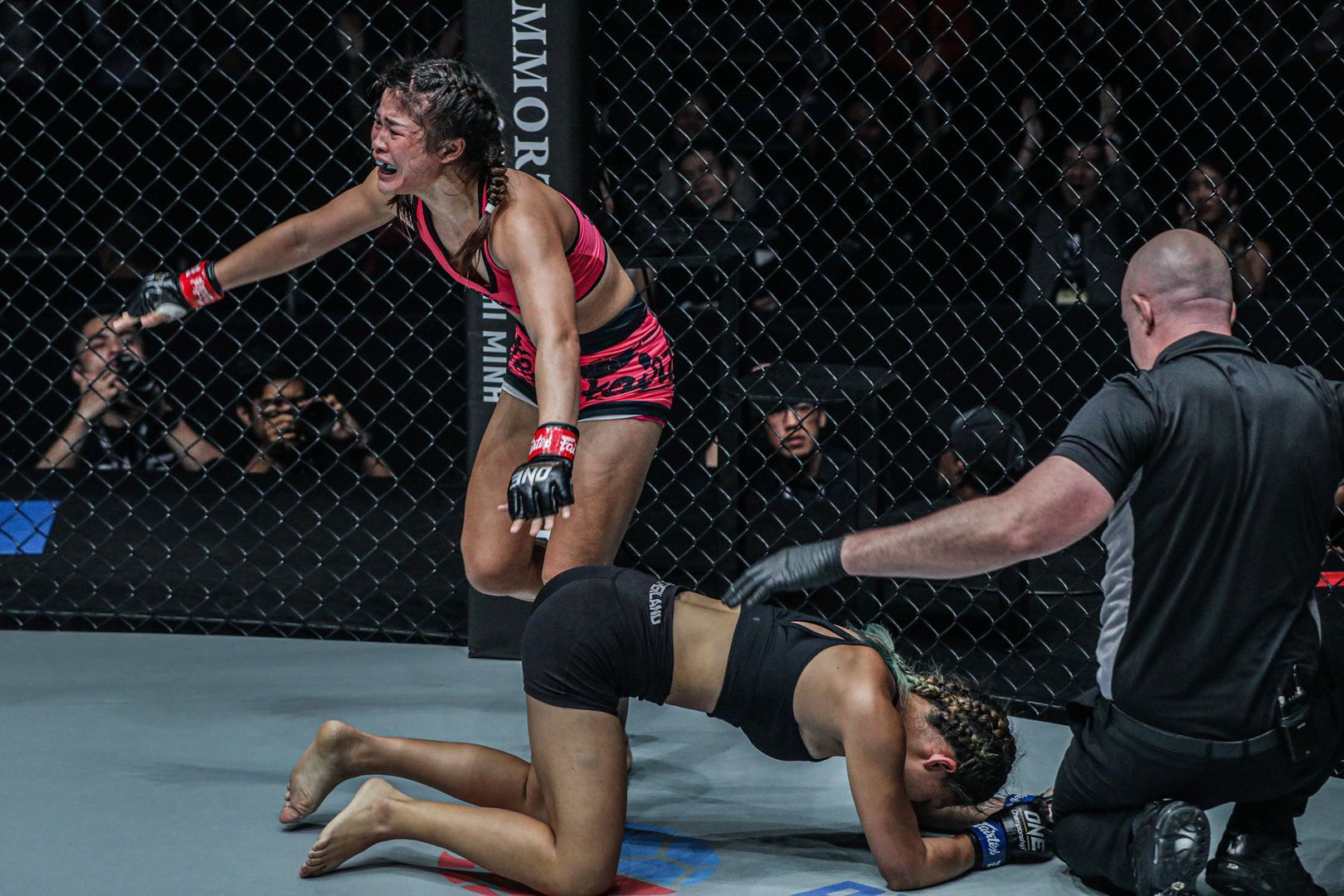 Despite her success, Stamp admits she has found it hard to keep a cool head under the lights in the world’s largest martial arts organization, but not this time.

Though she let her emotions come to the surface when she won, she was completely composed from when she walked out of her dressing room until the moment the referee ended the contest.

“This fight was different. Usually, I am really nervous, and even get nauseous before a fight, but this time around, I felt a lot better and more relaxed,” she explains.

“I think I am getting more used to competing at ONE. Going into the fight, I had such a good training camp. The match itself was a lot of what I trained, so it kept me relaxed.

“I was happy to be able to make my team proud, and show everyone how much I have developed.”

Although Stamp’s defeat of a dangerous finisher was impressive, and a great first step in her journey toward the ONE Women’s Atomweight World Title, she believes it will take a lot more work before she can challenge the top names in her new sport.

She is determined to focus on developing a well-rounded skill set for mixed martial arts for the foreseeable future and continue to improve by working her way up the ladder in her weight class.

However, she will not rule out a defense of her Muay Thai or kickboxing belts next if that is what she is asked to do.

“I think [I need] maybe five or six more fights in mixed martial arts before I’ll be ready for a World Title. I’ve got a lot to work on, and don’t want to rush into it,” she adds.

“I am not really thinking of any opponents that I specifically want to fight, but I am happy to fight anyone. You learn and gain experience from each opponent you face.

“As for the future, I’ll be ready for whatever opportunities ONE Championship puts in front of me. However, for the time being, I’d prefer to focus on mixed martial arts so I can gain experience.”