Kimihiro Eto may be a standout grappler, but this coming Friday, 28 February, he intends to prove to the world that he is a balanced mixed martial artist with a reputable stand-up game.

The 31-year-old will travel to the Singapore Indoor Stadium to face hometown hero Amir Khan in a lightweight battle at ONE: KING OF THE JUNGLE.

“Many people say my wrestling is strong, but in mixed martial arts, the flow is between striking and grappling,” the Japanese athlete explains. “I want to show everyone how smoothly I use them now.”

Eto, who is an accomplished collegiate wrestler, made his professional mixed martial arts debut in July 2013 and racked up a dazzling 13-3-2 record in the four and a half years that followed.

In March 2018, he joined Rich Franklin’s ONE Warrior Series in the hope of securing a six-figure contract and main roster spot with ONE Championship.

Although he lost to “Crazy Dog” Dae Sung Park at the developmental league’s inaugural live event, the Tokyo resident leaned on his grappling skills to finish his next three opponents. That fabulous win streak earned him a contract and a highly-coveted roster spot.

However, his first outing on the global stage at ONE: MASTERS OF DESTINY against his old foe, Park, in July 2019 did not go his way.

The Japanese athlete felt immense pressure and buckled under the bright lights. With that in mind, Eto went back to the drawing board and believes he has resolved that issue ahead of his upcoming showdown.

“I’ve been focusing more on imagining the fight itself,” the Wajutsu Keishukai HEARTS representative says.

“In ONE Warrior Series, there is basically no audience. I had seen a big ONE Championship show before, but when I actually walked out to the ring for my last match, I was quite shocked by the huge atmosphere and I lost my concentration in the second round.

“So, in training, I’ve been closing my eyes and imagining the feeling of the big show before I start sparring. That part was missing from my last camp.”

The Tokyo resident is scheduled to collide with yet another familiar face – except this time, it is against someone he built a rapport with merely 16 months ago.

In November 2018, Eto spent eight days training at Evolve in Singapore with Khan and the mega gym’s many World Champions.

Though time has passed, he feels the 25-year-old is sharper than ever and believes his style will make for a thrilling spectacle.

“Khan was my sparring partner when I was in Singapore,” the Japanese lightweight admits.

“My impression is he’s a great fighter, and since then, I think we’ve both improved. When we clash, I hope whoever watches will enjoy an aggressive performance.” From their training sessions together at Evolve to studying Khan’s recent performances, Eto reckons he has a deep understanding of the Singaporean knockout artist. Because of that, he knows exactly what he needs to do in order to achieve victory in “The Lion City.”

The Japanese athlete has tightened up his striking to complement his world-class grappling acumen, which happens to be a key component to his game plan.

Also, he believes the Circle is the best arena for his tactics and thinks it will give him an edge.

“My aim is to use feints and striking to set up the takedown. Depending on how I mix the strikes with takedowns – he will be conscious of both – I’ll be able to press him up against the cage,” Eto reveals.

“So, I’ve been putting together a plan to cut off his movement and use my takedowns. With the ring, it’s easier to get away, but you can’t do that with the cage. My specialty is using wrestling in the cage, so it’s much better for me.” 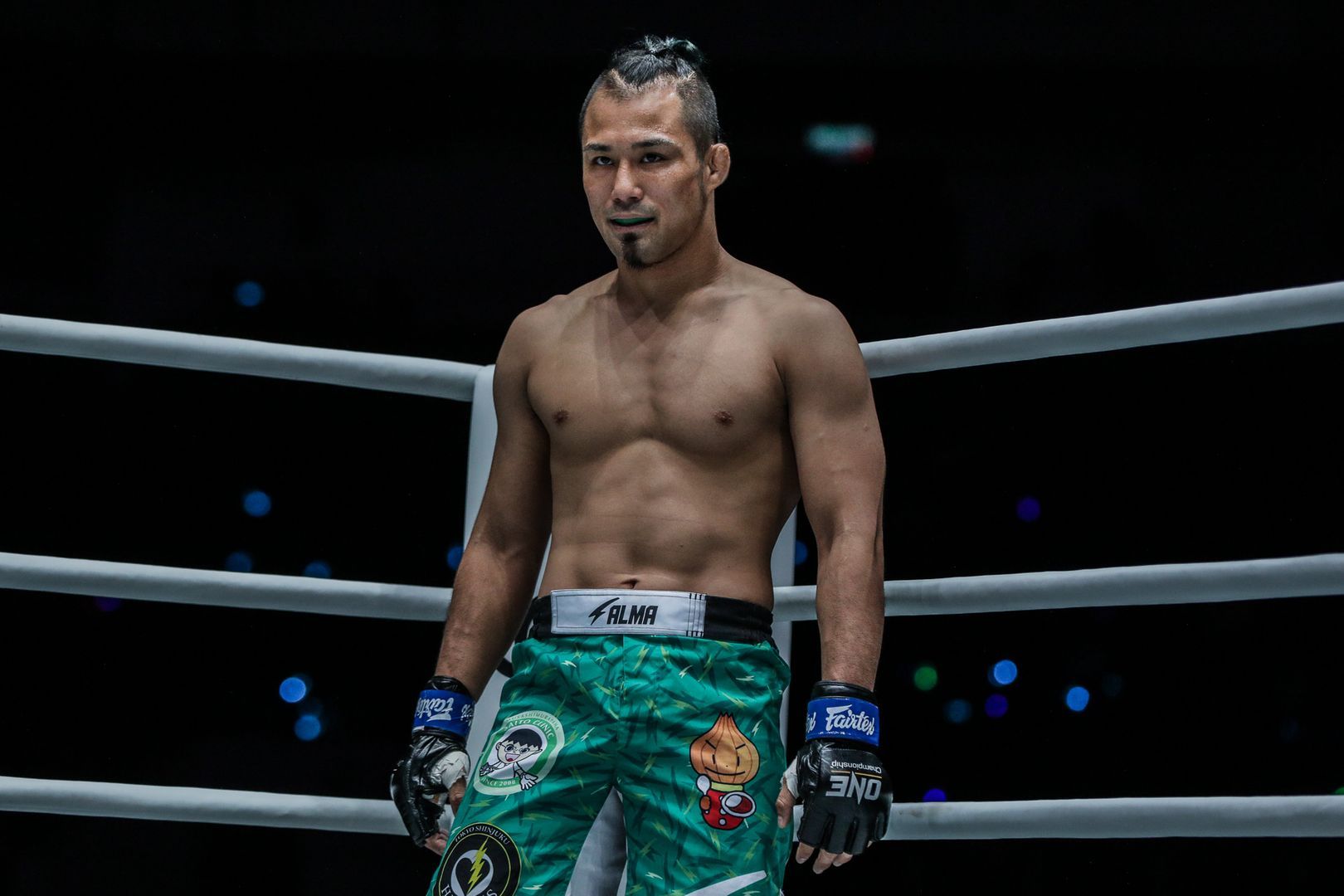 However, Eto needs to be careful. After all, he knows Khan – a Singaporean Muay Thai Champion and former ONE Lightweight World Title challenger – will be looking for another highlight-reel finish.

The Evolve product has developed a reputation as a fearsome knockout artist. In fact, he shares the record for the most KOs in ONE Championship history with his teammate, lightweight king Christian “The Warrior” Lee, at eight.

There is no doubt the young lion wants to keep the action upright and re-set the record, but the Tokyo resident has a method to counter his opponent’s suspected method of attack.

“I don’t think he wants it to go in the direction of takedowns and grappling. I think he’ll take a low stance and use his out-boxing,” the Japanese athlete offers.

“He has a slightly longer reach [than me], so he’ll circle and throw jabs. When the distance closes, he’ll look for a counter with his right, throw the middle kick, and take his distance again. I feel that if I can get inside the pocket, I can get the takedown.”

Eto is clear with his intentions, and if he is able to smoothly blend his martial arts skills together on Friday night, then he could achieve the biggest victory of his career.