Jonathan “The General” Haggerty delivered the performance of his young career to defeat Sam-A Gaiyanghadao and capture the ONE Flyweight Muay Thai World Championship.

In a spectacular main event at ONE: FOR HONOR in Jakarta, Indonesia, the 22-year-old from England showed no sign of nerves.

He courageously dropped the Thai legend twice en route to a unanimous decision victory and became the first British athlete to capture a World Title in ONE Championship.

???? BOUT OF THE NIGHT ???? British phenom Jonathan Haggerty turns in the performance of a lifetime against Muay Thai legend Sam-A Gaiyanghadao to win the ONE Flyweight Muay Thai World Title via unanimous decision!

???? BOUT OF THE NIGHT ????British phenom Jonathan Haggerty turns in the performance of a lifetime against Muay Thai legend Sam-A Gaiyanghadao to win the ONE Flyweight Muay Thai World Title via unanimous decision! TV: Check local listings for global broadcast

Haggerty made his intentions clear from the start of the contest as he opened up aggressively and landed a succession of powerful kicks. Sam-A seemed untroubled by the Brit’s strikes, but his slow start allowed the Englishman to establish his rhythm and take an early lead.

By the time Sam-A started to load up and let his strikes go in the second half of the round, Haggerty was relaxed and flowing as he continued to push forward relentlessly.

The Thai icon turned up the aggression in round two as the pace and intensity visibly, and audibly, increased. The powerful body kicks unleashed by both men could be heard echoing around the Istora Senayan, which evoked gasps from the audience.

The World Champ is picking up steam! ????

The World Champ is picking up steam! ????Watch the full event on the ONE Super App ???? http://bit.ly/ONESuperApp | TV: Check local listings for global broadcast

Haggerty continued to press forward, but found the Evolve representative much more aggressive in return.

The Thai legend pinned the Brit against the ropes and connected with powerful punches and short elbows, but his barrage of strikes only seemed to fire up the Roar Combat League World Champion.

Haggerty continued to match Sam-A’s aggression as he connected with straight punches and sent the 35-year-old World Champion staggering back across the ring with a big left hand.

Sam-A needed to call upon the experience of his 421 previous contests as he pushed forward at the start of the third frame. However, a well-timed push kick forced him to stagger backward. In response, Sam-A superbly swept the Englishman to the mat. 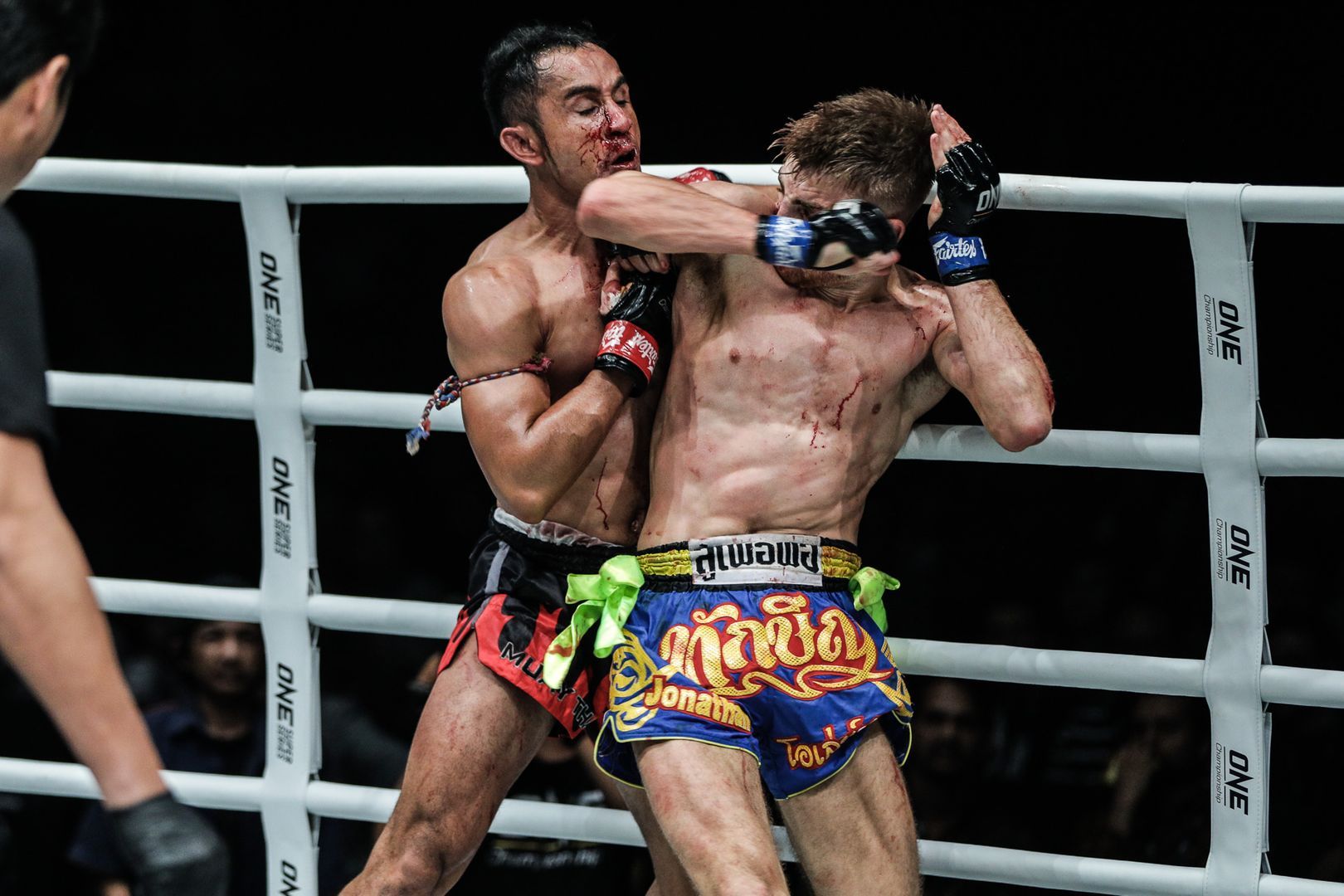 Haggerty bounced straight back to his feet and, after the action was restarted, landed a right hand to the cheek, which sent Sam-A to the canvas. That forced referee Atsushi Onari to issue the World Champion a standing eight-count.

It was a pivotal moment in the contest as it gave the challenger a clear 10-8 scorecard.

Knowing he had to do something significant after being knocked down in the third round, Sam-A came out more aggressively than ever at the start of the fourth and unloaded with hard punches and knees to the body.

Although Haggerty looked like he was starting to tire, he took his rival’s best shots and fired back. He shrugged off a big Sam-A right hand, then connected with a spectacular spinning back elbow as he continued to trade toe-to-toe with the Muay Thai legend.

Fifth-round knockdown for "The General!" WHAT. A. BATTLE!

Fifth-round knockdown for "The General!" WHAT. A. BATTLE!Watch the full event on the ONE Super App ???? http://bit.ly/ONESuperApp | TV: Check local listings for global broadcast

After a big round four, Sam-A looked to complete his comeback in the final frame, but Haggerty sent him to the canvas for the second time with a beautiful straight right after his skip-knee just missed the target.

It left Sam-A chasing a finish – as a second 10-8 round practically guaranteed he would lose on the judges’ scorecards. The Thai gave everything he had, and he desperately looked to land a decisive strike on the Englishman.

However, Haggerty stayed on his toes, and by the halfway point of the final round, the defending World Champion’s gas tank looked to have run dry.

The 22-year-old reached the final bell knowing his knockdowns would be enough to give him a historic upset victory at the end of one of the best bouts of 2019 so far.

Jonathan Haggerty has done it! The British phenom shocks Sam-A!

Jonathan Haggerty has done it! The British phenom shocks Sam-A… and calls out another Thai superstar! ????TV: Check local listings for global broadcast

The Team Underground, Knowlesy Academy, and Keddles Gym-trained striker earned just the 15th win of his young career, but it put him on top of the Muay Thai World.

In his post-bout interview, Haggerty revealed he had broken his nose in the opening exchanges, but continued to compete through the pain to get his hand raised.

Despite his injury, he targeted his first challenge as World Champion by calling out Rodtang “Iron Man” Jitmuangnon. If the Thai star can defeat Sok Thy next week at ONE: WARRIORS OF LIGHT, their match would be sure to bring more incredible action to ONE Super Series.