This coming Friday, 9 October, Amir Khan will have more riding on the line than in any other matchup of his mixed martial arts career.

That evening, the 25-year-old will face Rahul “The Kerala Krusher” Raju at ONE: REIGN OF DYNASTIES in a lightweight bout.

From the outside, it may look like just another opportunity for the Singaporean knockout artist to add a highlight-reel finish to his record.

But when Khan enters the Circle, he’ll be fighting for his father, his future, and bragging rights when it comes to naming the top Singapore-based lightweight mixed martial artist in ONE Championship.

“I actually spoke to him when we did a shoot. I said, ‘It looks like we are going to face each other next.’ Then he agreed. So, yeah, I’m not surprised. I was kind of expecting it.”

Still, the Evolve representative wasn’t expecting the bout to happen under these circumstances.

After a successful run on the global stage, Khan has gone 1-4 in his last five outings, with his lone victory coming against Ev “E.T.” Ting by split decision at ONE: EDGE OF GREATNESS in November 2019.

Khan is also dealing with a devastating situation in his personal life. His father, who’s supported the athlete both inside and outside of martial arts, was recently diagnosed with Stage IV brain cancer.

Because of his blemish-filled record and the news that his father may only live for another three months, Khan wants nothing more than to make good on his promise to the man who raised him – and that all starts by defeating “The Kerala Krusher” on Friday.

“I want to fight with purpose. My mission is to win the [ONE Lightweight World Title] belt before my father passes,” Khan says.

“But when I step into the arena, I’m just going to focus on Rahul, because by taking out Rahul, I will be closer to my mission. And if I don’t give him 100 percent attention, I won’t be able to execute.”

Khan also recognizes that he may find himself trying to execute a game plan against an entirely different fighter than the man he last saw in action.

Raju last competed at ONE: EDGE OF GREATNESS, where he scored a second-round submission win over Pakistani warrior Furqan “The Lion” Cheema. But before locking in the bout-ending rear-naked choke, the Singapore-based Indian had shown impressive improvements in other areas of his skill set.

“He is constantly evolving,” Khan says. “I can’t expect the old Rahul every time I see him in the cage.”

So, what can Khan expect?

“Decent grappling,” he replies. “He tries to grind people down and make them tired. He’ll try to drag me down and try to make me tired and get the submission finish.”

I believe in my dreams , I trust the team around me and no matter how many times I fail, I will get back up. ???? @modestoddest #sg55 #resilience #mma #onechampionship #evolve #boxing #muaythai

With that in mind, Khan has used his training to mimic situations that he might find himself facing against Raju. Doing so has been a tremendous confidence-builder for the man who’s tied with ONE Lightweight World Champion Christian “The Warrior” Lee for most knockouts in ONE history.

“We’ve been preparing a lot for the worst-case scenario in this fight. But we’re not too worried because I’m confident that I’m better than him in every area – even the wrestling and grappling,” the Evolve product says.

“But obviously, we do not want to fight where he’s comfortable. We are focusing on trying to get a flow for me, and I know once I get in a flow, I will capitalize on that and finish him.”

Getting into a flow for Khan most likely means staying on the outside and throwing his best shots at “The Kerala Krusher.” In the knockout king’s opinion, Raju simply doesn’t stack up in the striking department.

“He’s not so disciplined when he exchanges,” Khan says. “And if he throws a bad shot at me, I will make sure I punish him.”

That’s been the strategy for Khan throughout the course of his career, but this time, the Singaporean is promising something even more impressive.

Waiting patiently for that compound effect ????????

Khan has never lacked motivation, but he admits the recent developments in his life have lit a fire within him – a fire that’s fueled his newfound inspiration throughout his training camp.

One percent: It’s the simple – yet magical – number known to transform ordinary athletes into World Champions ­­if they aim to better themselves by that much every day.

The Evolve representative believes those “one percents” have now added up, and he is ready to show the world what a new and hungry Khan is capable of.

“I have a feeling this will be the turning point of my career,” he says.

“I didn’t have a smooth run the last two-and-a-half years, but I feel this battle will truly showcase myself and my personality. You’re about to see a rebirth of me.” 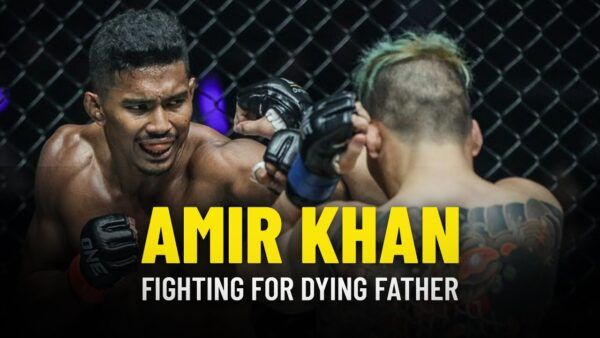