Two months ago, life in Amir Khan’s household was carrying on as usual. Then one day, the star athlete realized something terribly odd about his father, Tajudeen.

Concerned about his dad’s well-being, the 25-year-old – who will face Rahul “The Kerala Krusher” Raju at ONE: REIGN OF DYNASTIES on 9 October in a lightweight mixed martial arts bout – helped Tajudeen climb into bed.

And then the violent seizures came.

“We called the ambulance, and once we got to the hospital, he regained consciousness. The doctors did tons of scans – CT scans, brain scans, MRIs. And then after a few weeks, he went for a biopsy.”

As Khan’s family awaited the test results, they could only speculate as to what the doctors had pinched and snipped away from Tajudeen’s brain.

“My mom works as a nurse at a hospital,” Khan says. “She told me it could potentially be a brain tumor or cancer.”

Despite that knowledge, Khan’s family was crippled with disbelief upon receiving the diagnosis. Tajudeen had Stage IV cancer – namely, lymphoma of the brain, a malady that rapidly affects the central nervous system. It can cause changes in behavior and personality, seizures, and within months, death.

“The doctors gave him three-to-six months, but they don’t know, right? That’s a rough estimation. They said he might not have long to live.

“He doesn’t want me to go on living depressed or being affected by this scenario, so I’m just trying to make each day count and be positive. And who knows, he might live longer.”

Amir Khan’s cashless day out in Thailand with VIA

VLOG: Ahead of his upcoming ONE Championship bout on 22 Feb, Singapore’s own Amir Khan, took some time off training for a day of shopping and father-son bonding in Thailand. He paid using Singtel Dash, meaning no hassle of changing money, plus exchange rates as competitive as Amir himself! 😉

Statistically, people diagnosed with late-stage lymphoma of the brain have a life expectancy of 45 days if the cancer goes untreated. But even with treatment, the outlook is often dismal.

Only 30 percent of people live for another five years. And that duration includes long and dreadful bouts with the effects of chemotherapy – effects that can even be worse than the lymphoma itself, which was a factor that Khan’s father had to contemplate when doctors asked how he wanted to proceed.

“He decided not to get the chemo because the procedure is painful,” the lightweight star says. “He doesn’t want to live his last moments suffering. So, we’re respecting his wishes and trying to make the best of it.”

It’s an optimistic outlook for the Singaporean, who over the last year has dealt with a swarm of life-altering scenarios that have taken a toll on his professional career.

From setbacks in the ring to COVID-19 to training restrictions to his father’s diagnosis, Khan has been forced to face the most sobering truth – that, more often than not, life is unpredictable.

“Even though we have bad moments, we got to accept the facts, adapt, and grow,” he explains. “All you got to do is overcome and not get stuck because bad things happen to us. We can’t just pass on life.”

Easy counter drills you can do with anyone!! Now go grab your dad, mom, wife , brother, sister or kids ???????? P.s trying to get my dad back into shape even tho he said round is a shape ????????#grandaddyjokeoftheday #stayathome #mma #drills #fatherson #family #onechampionship #fitness #shadowdrills

Truth be told, Tajudeen never let his son pass on anything, whether it was coping with Tourette Syndrome or overcoming challenges in the ring.

When Khan was 15 years old, for instance, his father traveled with him to Thailand, where the budding athlete trained for two months for his first Muay Thai title fight in Phuket.

“I fought four hard rounds, and in the last round, I wanted to quit because I was getting tired,” the Singaporean lightweight recalls.

“But every time I wanted to give up, I looked at him and he was there to cheer me up. He gave me the strength to continue, and I ended up winning the fight.

“That was the first victorious moment of my career with him.”

It wouldn’t be the last.

After a career in Muay Thai, Khan transitioned to mixed martial arts and joined ONE Championship in 2014.

Over the last six years, the Evolve standout has earned a dozen victories and set the record for most knockouts in the promotion’s history at eight (an honor he now shares with ONE Lightweight World Champion Christian “The Warrior” Lee).

Breaking records was always secondary for Khan, however. What motivated him more was knowing how his stunning finishes made his father feel.

“Whenever I’d compete, I’d bring him backstage with me and take him along for fight week. Nothing made him happier than me getting a spectacular KO,” Khan says.

“Whenever I had a good performance, he’d be the proudest dad in the world. He’d tell his friends and our family members, so I would just try to replicate that in every fight. I will always cherish those moments together.” 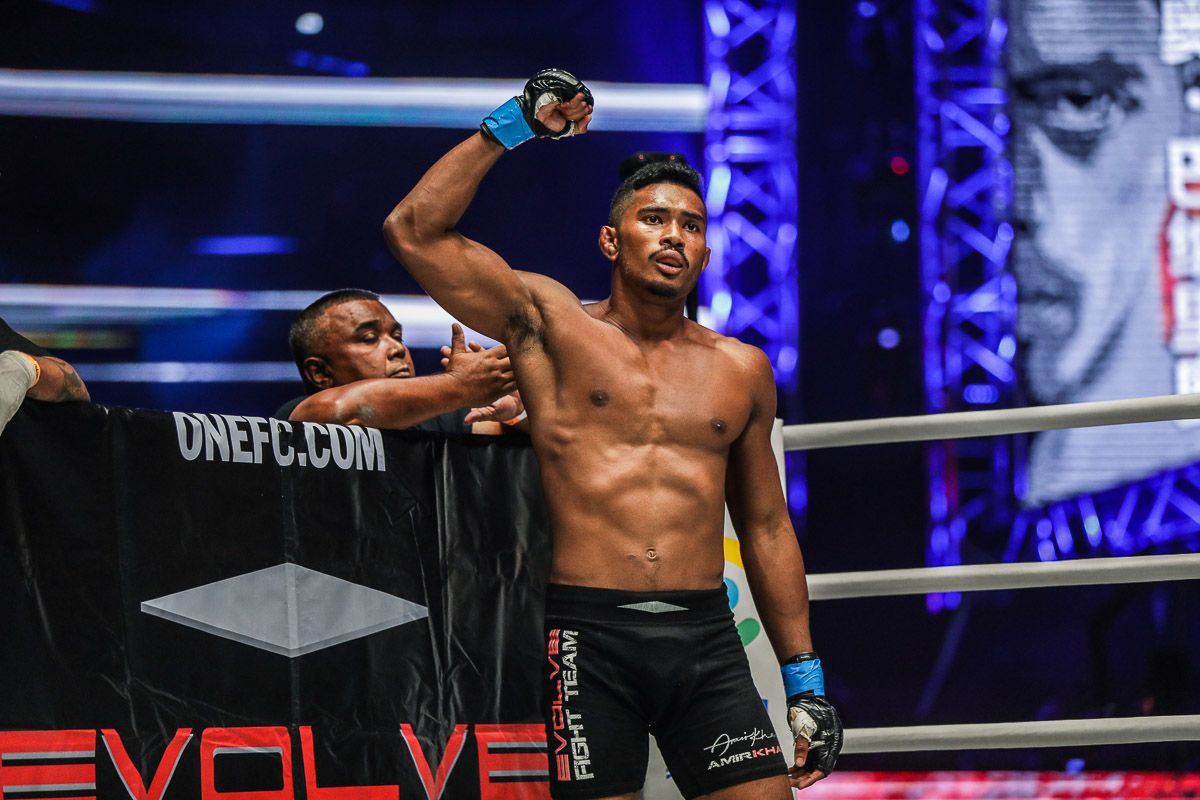 Now with his dad in the fight of his life, Khan promises that martial arts fans will see the knockout artist of old – not because he wants to surpass Lee for the most knockouts in ONE, but because he may have just one more chance to cheer up the man who’s always inspired him.

“I want to get a good win for my father. Not only get a win, but finish [Rahul] because I know that will make him proud and happy,” Khan says.

“That feeling of me making him happy and seeing the joy in his eyes is the ultimate happiness for me because I care and love my dad.”

Through it all, the mission remains the same for Khan – except nowadays, there’s just a little bit more urgency.

“My goal is still to be a World Champion,” he says. “And I hope he’s here to see me achieve that goal.”

Read more: Full Card Revealed For ONE: REIGN OF DYNASTIES On 9 October