Michael “The Voice” Schiavello is one of the most recognizable and beloved broadcasters in martial arts, but not many people know that his rise to stardom is a story of triumph over adversity.

That is all about to change as ONE Championship’s commentator prepares to launch his new book, “Good Night Irene: How A Bullied Fat Kid From Melbourne Became A Global Broadcasting Star.”

“The Voice” has endured more than his fair share of struggles with abuse, self-doubt, and mental health, but through sheer hard work, he’s become known around the world for his energetic announcing and in-depth interviews.

His memoir will give fans a behind-the-scenes look at his encounters with sports stars and celebrities – from the World Cup to the ONE Circle – as well as intimate access to his most difficult experiences.

Ahead of the book’s release on 1 October, Schiavello sat down with ONE to discuss his reasons for writing, how he mined his memory for some of the most extraordinary tales, and what readers can expect when they pick up a copy. 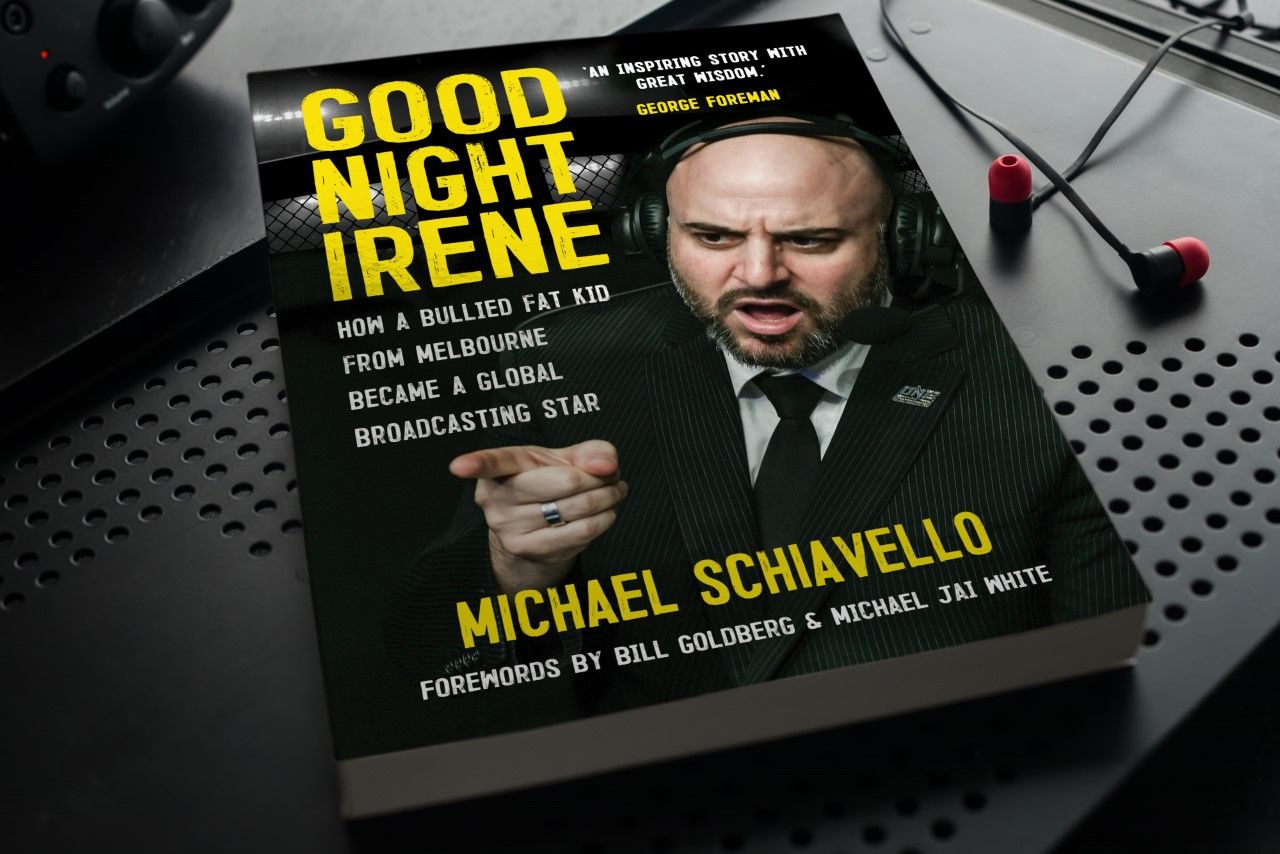 ONE Championship: Why did you decide now was the time to write your memoir?

Michael Schiavello: People always want to hear stories about the celebrities I met or the adventures that I had overseas – you know, commentating in 26 different countries and meeting Steven Seagal, Jean-Claude Van Damme, Pele, Diego Maradona, Jackie Chan, Stone Cold Steve Austin, Hulk Hogan, you can list them all. Every time I tell these stories, people were like, “You should put this into a book.”

So, last year I thought, ‘It’s time to start putting this into a book and get some of these stories down on paper so I don’t forget them as I get older.’ And as I started to jot them down, something developed.

More to the point, I’ve got two boys – a 6-year-old and a 3-year-old – and they started asking about what Daddy does for work and why Daddy is on TV, so I started telling them about it. They’re a little too young to understand everything, so I wanted to get my story in the book for them as well so they’ll be able to see what Daddy did.

As I was writing this, it sort of turned into more of a social message for me because I really started to trigger a lot of memories from my young days. Being bullied and picked on, and people saying I’d never amount to anything. The blood, sweat, and tears that it took to overcome those bullies, overcome those tormentors, rise above the pack, stick to my dream with dogged hard work, determination, and fierce desire to achieve it.

The more that I wrote, the more I thought to myself, ‘This is an important message that I can get across, and I hope I can inspire people because I’m just a really average guy who has no formal qualifications in anything I’m doing.’

I’m an average guy, a son of an immigrant factory worker, but I worked hard. I wanted to have a very relatable book that people could read and be inspired by and say, “If Schiavello could do that, then there’s hope for us, too.” 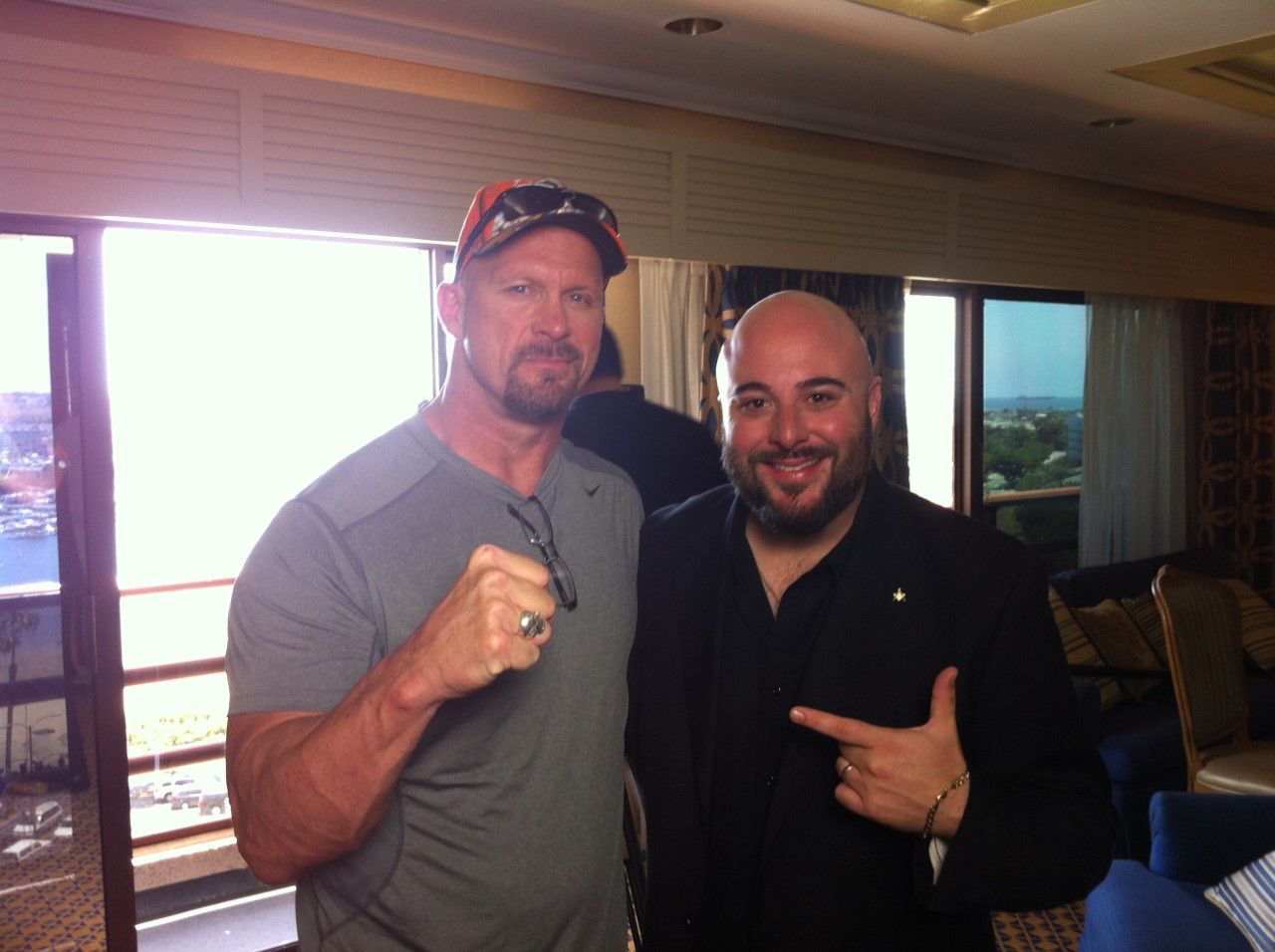 ONE: Who would you say this book is for, and what do you hope they get out of it?

MS: I would say this book is for anybody. It appeals to sports fans who want to go behind the scenes and read stories about sporting personalities. It appeals to celebrity fans who want behind-the-scenes stories of celebrities that they’ve adored from movies, music, or whatever it may be.

But I think who I really hope the book appeals to is teenagers through to those 30-year-olds or so that may be feeling directionless in life – maybe feeling they can be nothing more than what society expects them to be. They might have a nine-to-six job and that’s the totality of it, but they dreamed and had aspirations of doing more than that. They wanted to be a doctor, a lawyer, a broadcaster, an astrophysicist, or an athlete, but people kept putting them down and said they couldn’t do it for whatever reason.

I hope the book appeals to them. I’m not someone you’re used to seeing on NBC or CBS or ESPN. I’m not your clean-cut, blond-haired, blue-eyed, silky-smooth-voiced, velvety announcer, but I’ve achieved more. I’m being broadcast around the world. I’ve spent time with all these cool people that you kids are asking stories about. I did it, and I never came from money. I never came from a lofty education. I just worked hard. I listen to good people around me. I had a lot of confidence. I went for it. I kept going for it. No matter how many times I got knocked down, I kept getting up.

Also, I want this book to appeal to all of our ONE Championship fans around Asia. I know there are so many people out there that would like to be a ONE athlete like Angela Lee, Aung La N Sang, or Martin Nguyen. They’re always asking, “How do I become successful like you?” 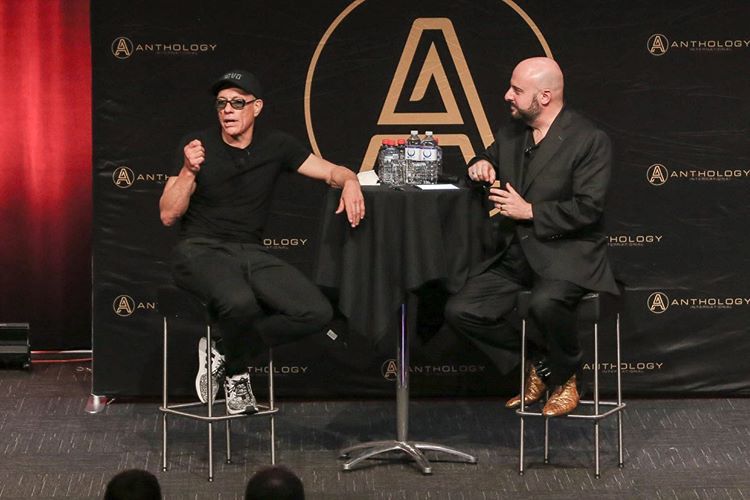 ONE: Was it difficult for you to write about the struggles in your life – from the bullying you suffered to your mental health?

MS: Very hard. When I was writing it, I teared up a little because these are memories that I closed out from my mind. Anyone who’s been bullied, I’m sure that they try and put those memories in a vault, lock it up, throw away the key, and never look at them again. But writing this book forced me to unlock that vault and take these memories out.

I gave my mom a copy of the book last week, and she got a few chapters in and she rang me – and this is a little bit as emotional for me to tell you this – she goes, “Oh my God, I’m so sorry! I never knew all this bullying happened to you!”

I didn’t tell anyone. I just kept my demons to myself, and I dealt with them. It was very emotional for me to hear that from my mom and for me to jog those memories, but also very therapeutic, too. To know that happened to me, and I overcame it. I resorted to self-belief and hard work. I wasn’t going to let anybody tell me that I couldn’t do it. And the more you told me I couldn’t, the more I wanted to do it.

When it came to anxiety – because it’s still a thing these days, I fly a lot and sometimes you’re on that plane and you know, you’re not going to see your family or your colleagues for a few hours. You’re transiting around the world, and that anxiety gets to you. It goes to 15 minutes later, and once I see all the great crew at ONE Championship, I’m thrilled. But there’s a period on the plane when that anxiety eats away at you. The only people that knew about my anxiety issues were my mom and my wife, so coming to terms with that was very therapeutic. 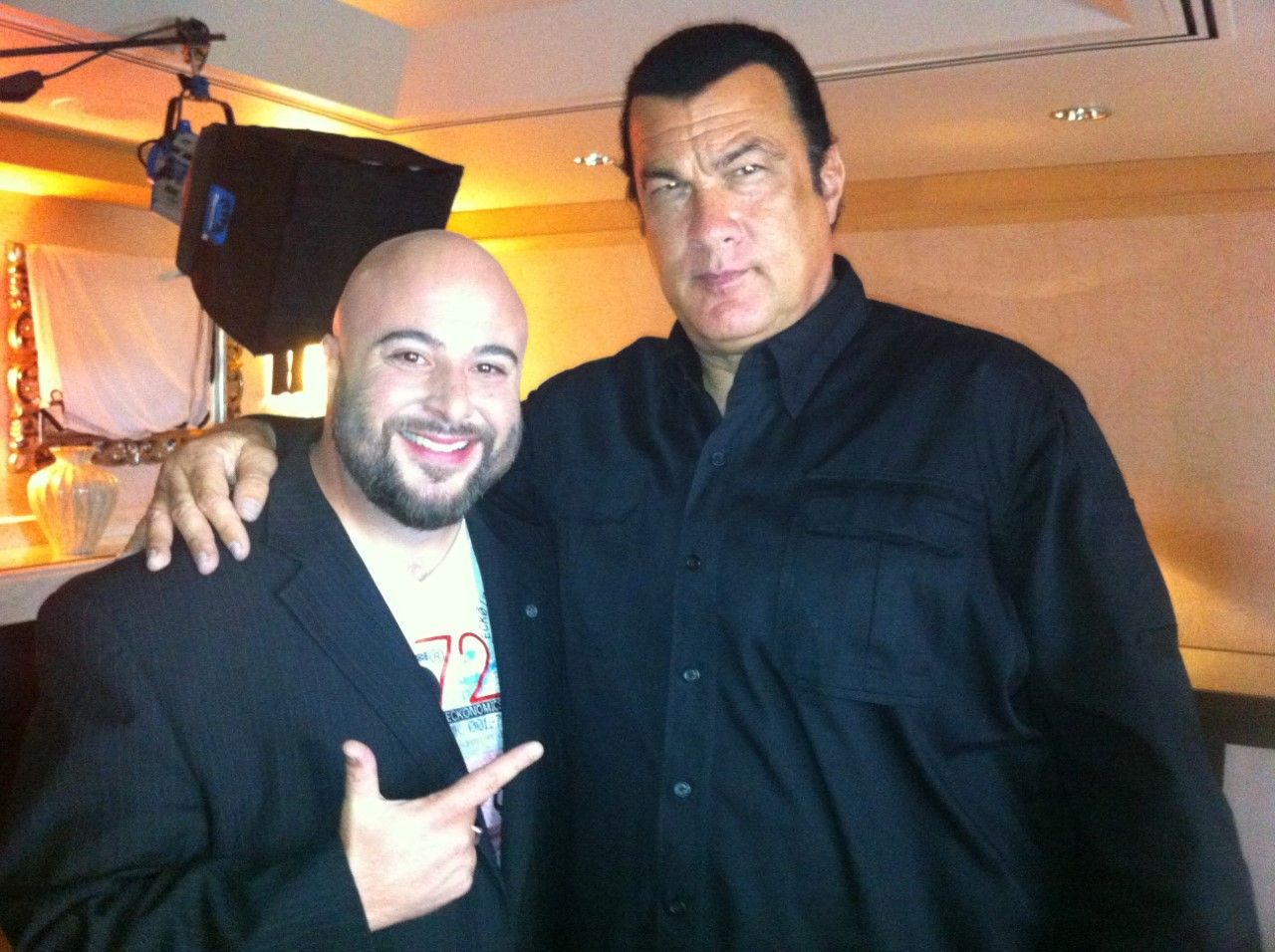 ONE: How hard was it to whittle down all of these experiences and choose the ones that made the final cut?

MS: Very hard. To be honest with you, I could have written three or four books. I could write a volume or two volumes on my time at ONE Championship alone. Maybe I’ll do a second book somewhere down the track. I think that would be nice because I know that a lot of people are going to say, “What about this? What about that?”

I had to think about what was most entertaining, and what was most relevant to the message I’m trying to convey about overcoming those obstacles and getting to where I am.

ONE: In terms of what made the cut, what stands out as a particular highlight – maybe a story you always wanted to tell?

MS: Well, I think finally setting the record straight and getting the whole Steven Seagal saga onto paper for people to read is probably the number one highlight in the book. There’s so much depth to that one story in the examination of Steven as a character, the examination of him as a person, and the aftermath of what went on.

And for me to put the emails of how the interview came about, to reveal that, to reveal what we were thinking, my production crew and I behind the scenes to reveal what transpired afterwards, I mean, that interview alone was a massive ratings winner on TV in America. When everyone Googles “Steven Seagal interview,” that’s the one that comes up.

Also, being able to tell some of the K-1 stories and how I became “The Voice.” That’s how people around the world got to know me. And I’ll always have that legacy of being the voice of this amazing astronomical promotion that was the K-1 juggernaut, this incredible entertainment and sporting spectacle. I’m forever honored and privileged to do that.

And you know, how I got signed by them and the early days with Mark Hunt, the help of Ray Sefo, my relationship with Badr Hari, and all that sort of stuff. I was very thrilled to be able to get that out because I think people always enjoy hearing about it when I speak about it.

That’s what I’m probably most known for – indeed, that’s how I got signed to ONE Championship. Chatri Sityodtong heard me during the K-1 days, he was an avid K-1 viewer, and he was a fan of mine. And when it came time and they were looking for a new commentator, he was like, “What about that K-1 guy. Michael Schiavello is available? Let’s try and sign him. We want that guy.” 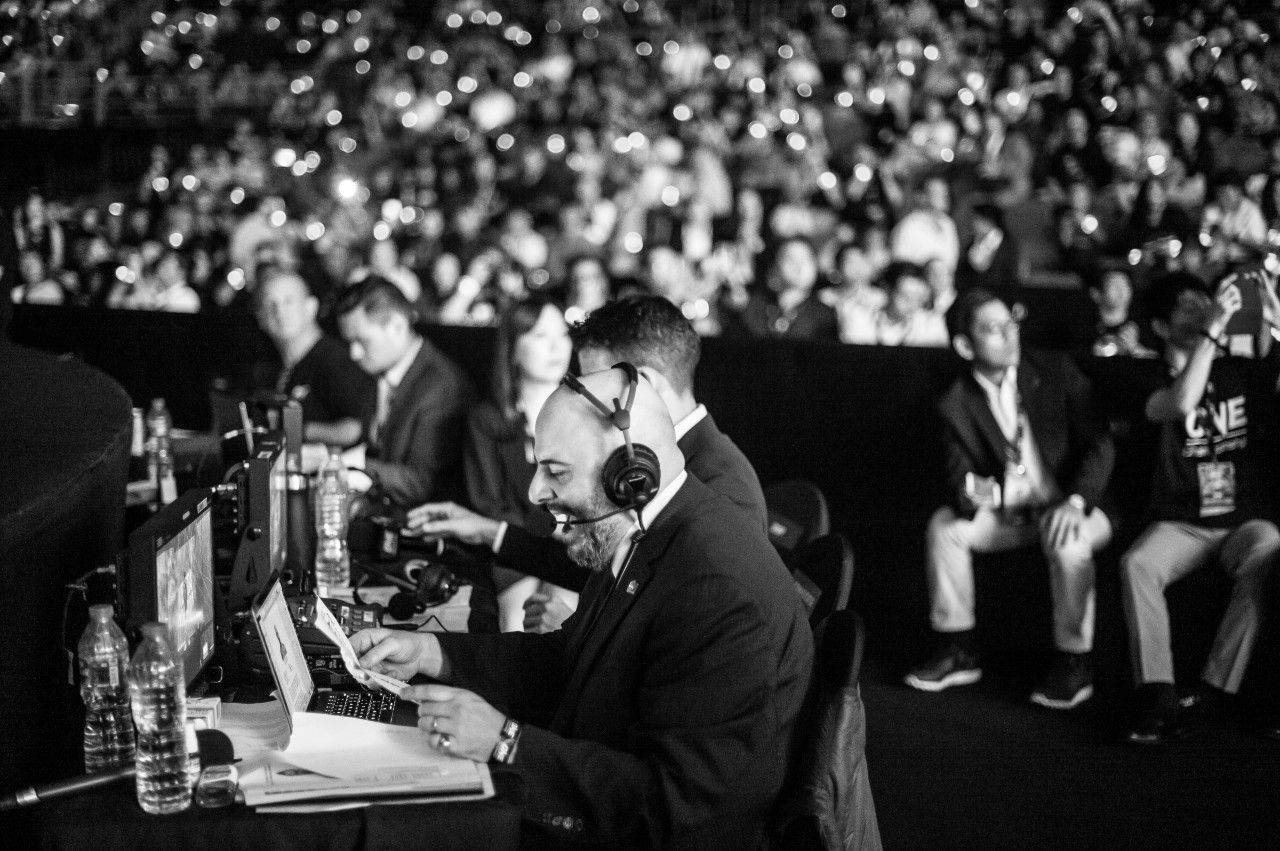 ONE: What made you choose Aung La N Sang vs. Ken Hasegawa as your story from ONE?

And for me, it was the culmination of everything I’d worked towards in my broadcasting career – coming together to produce one magical, flawless commentary that was considered so good by a panel of 50 expert judges that it won the Asian Television Award.

For me to do that proved that everything I fought for in my career – the blood, sweat, and tears, the insecurities, overcoming the bullies and the tormentors – it was all leading up to create a perfect moment. That came during a perfect match. The perfect match came in ONE Championship in an amazing city, Yangon, Myanmar, between two amazing athletes.

To be able to recall that in a whole chapter and take the viewers deep inside that contest, what happened, the process of the commentary, and then through the Asian Television Awards in Sarawak, Borneo, and winning the award and what it meant to me is why I put it towards the end of the book.

It’s sort of a climax that was very special to me. I’m so thrilled that I got to do that. 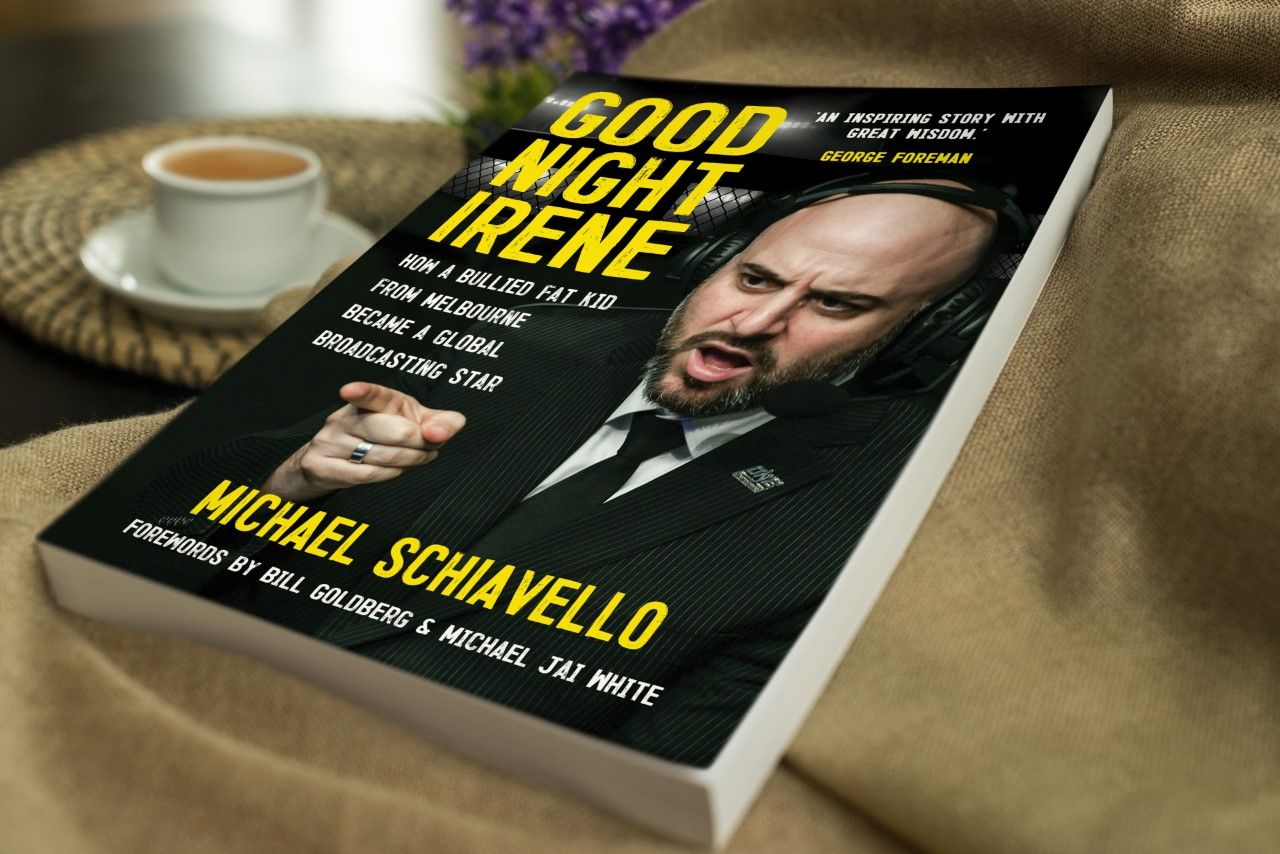