Nearly a decade ago, ONE Championship lightweight contender Pieter “The Archangel” Buist was homeless and in debt.

The struggling athlete hated the direction his life was going and vowed to turn it around. He even drafted a plan, which was comprised of small, practical steps that would ultimately lead to his big goal.

One of the most important steps in the Dutchman’s plan was to get a job that would cover his living expenses and allow him the time to develop his mixed martial arts career.

Eventually, he found an ideal job that would pay him a decent wage and give him the flexibility to pursue his dream.

Never forget what you are worth…… You're priceless your a champion !!! • ???????? • This picture is from 8 years back I was 22 years old just finished my education & I just got my apartment so I was no longer homeless & because of the economic crisis in that time it was hard to find a job, but after some struggle i found a job as Garbage men at @gemeente_breda(thq for everything @gemeente_breda ), it was perfect for me to combine it with my passion and my main focus mma!! I worked 8 hours a day and picked up more than 20000kg a day and next to that I managed to train 2 times a day just to achieve my goals!! I did this for more than 8 years and sins last year I'm a full-time pro mma fighter climbing to the top of the ONE CHAMPIONSHIP lightweight mma ranks to claim that gold !! • ???????? • @onechampionship @yodchatri @victorcui #WeAreONE #family #MartialArts ⠀ ___________________________________________________⠀ #ONEChampionship #WorldChampion #Champion #WarriorSpirit #Knockout #KO #Submission #MuayThai #ThaiBoxing #Kickboxing #Wrestling #Boxing #BJJ #BrazilianJiuJitsu #jesussaves #Grappling #Karate #MMA #MixedMartialArts #Fight #Fitness #Training #Sports #Entertainment #BeastMode #Asia

Buist found work as a trash collector for his local municipality and, just like that, he started fulfilling the steps of his newly-created blueprint for success.

“Before I was a garbage man, I was homeless. I was sleeping in a park or sometimes on someone’s couch,” the Breda, Netherlands athlete reveals.

“I reflected on myself, made a choice in life, and made a deal with God. I made a plan, and that plan was to graduate [college], and then find a job that I could combine with my training, so I did.”

The ever-positive Dutchman found an opening for trash collectors, and he saw plenty of upsides to the rigorous work.

“It was a physical, tough job. Every day when I was working, I walked around 35 kilometers and picked up more than 20,000 kilograms of trash a day. So, physically, I saw it as good strength and conditioning training,” he offers.

“Also, it was honest money. I grew up in a neighborhood where a lot of people were drug dealers. For me, it was not an option to do that. I saw the lifestyle they had and I didn’t want that, so it was an honest and fair job that made me humble.”

Buist made it clear to his employers that his main focus in life was his martial arts career and, fortunately, they were sympathetic to his dream and encouraged him.

Although it was tricky to manage his training routine with his day job, “The Archangel” figured out a way to fulfill his work responsibilities and attend his gym sessions.

“I worked five days a week and trained two times a day,” he explains. “I woke up and went to work, and then on my lunch break, I went to the gym to train for an hour. The garbage truck picked me up, and then I worked again, and then I trained again in the evening.”

Through his dedication, Buist rose up the mixed martial arts ranks, got himself out of debt, and rented an apartment. With a stable place to lay his head at night, it was on to the next step of his plan.

“I worked for two years, paid off all my debts from before, and found my own apartment, so mission one was a success. Then, my next mission was to work less and train more,” the 32-year-old offers.

“Training was my main priority, and my bosses knew it. They saw the results because I won almost all of my fights. When I became a European champion, they knew that I was on to something.” 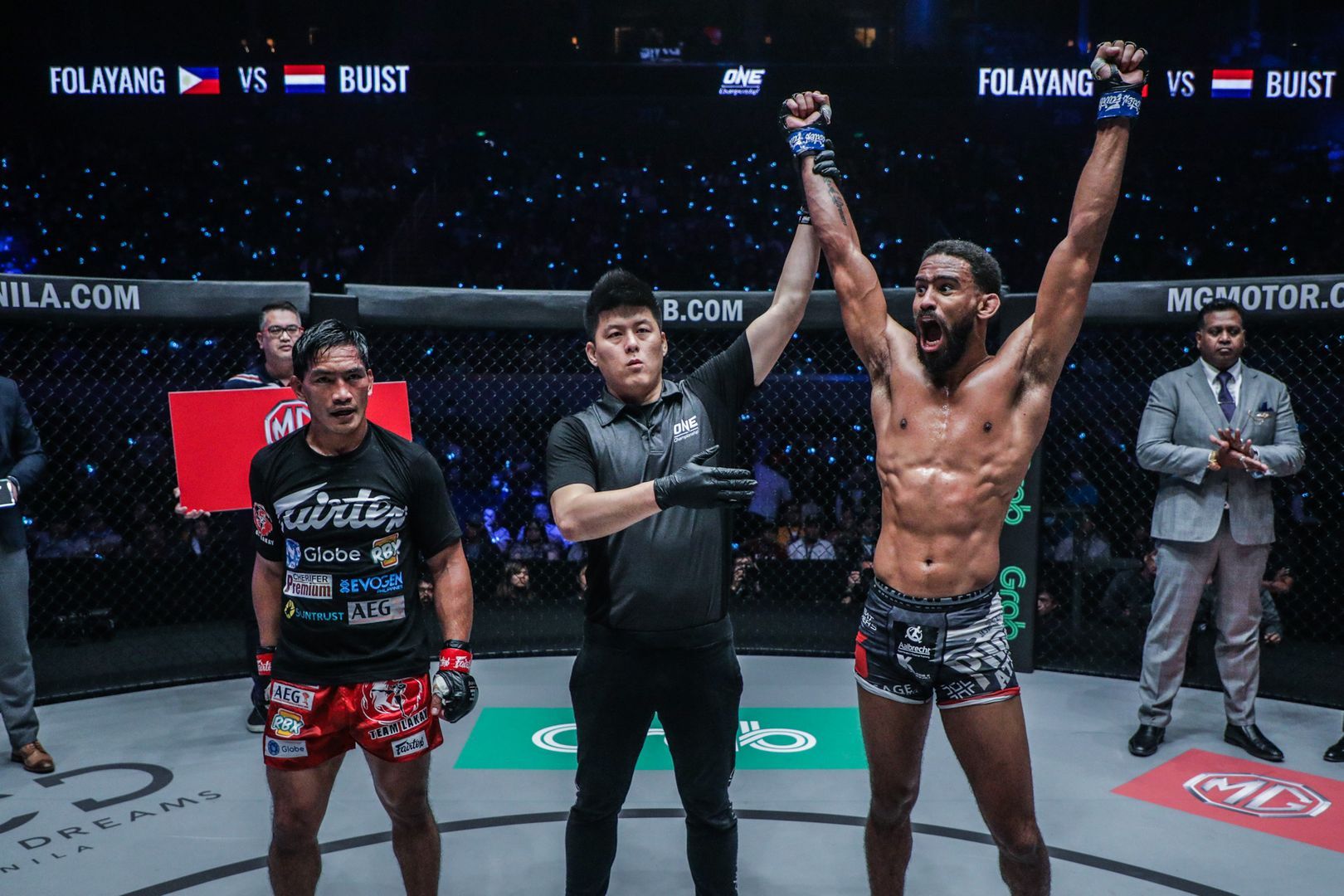 “The Archangel” won a pair of European title belts in the welterweight and lightweight divisions, and then he won the WFL Lightweight Tournament World Championship.

He started fielding offers from other promotions, but opted to sign with ONE Championship in 2019.

Buist’s deal with The Home Of Martial Arts gave him the chance to become a full-time athlete, and now, following his stunning victory over Filipino icon Eduard “Landslide” Folayang in January, he is nearing the final step of his plan – winning the ONE Lightweight World Title.

It has been a long journey for the Dutchman, but his day job as a garbage man eight years ago laid the foundations for his success.

“For me at that time, that job was the great turning point,” he says. “I signed with ONE because I truly believe in their company. It’s the biggest mixed martial arts organization in the world, and now I am [a top] contender for the World Title.”