Stefer “The Lion” Rahardian may be one of Indonesia’s leading stars on the global stage, but his mixed martial arts journey started five years ago on his country’s national circuit.

The Jakarta native made his professional debut in a local promotion called Xtreme Cage Championship (XCC) on 12 April 2015, and he started his rapid ascent up the ranks with a second-round submission victory over Wardi Suwardi.

“I remember that moment,” the 33-year-old begins. “It was what paved the way to my professional career in ONE Championship.”

It was not as straightforward as simply turning up to compete, however. “The Lion” had a huge mountain to climb before he even made it to event night.

“When I accepted the offer to compete in XCC, I had just recovered from a leg injury and I was overweight,” he continues.

“In five months, I had to lose almost 20 kilograms because, during my recovery time, I didn’t do many activities.”

Rahardian had to drop from around 75 kilograms to 56.7 kilograms for the contest in the five-month training camp.

The Indonesian could have declined the offer and patiently wait for another event to come around.

Back then, however, shows in his homeland were infrequent and he did not want to miss an elusive chance to compete. With that in mind, “The Lion” set about his mammoth task.

“At that time, mixed martial arts events were very rare, so I did not want to miss the opportunity, although I knew it would require a tremendous effort to lose such a massive amount of weight,” he admits.

“I trained under the guidance of Andrew Leone. It was a twice-a-day, high-intensity training. I also have to thank my training partner at that time, Mario Satya Wirawan. And we did it. I managed to lose the weight just in time.” 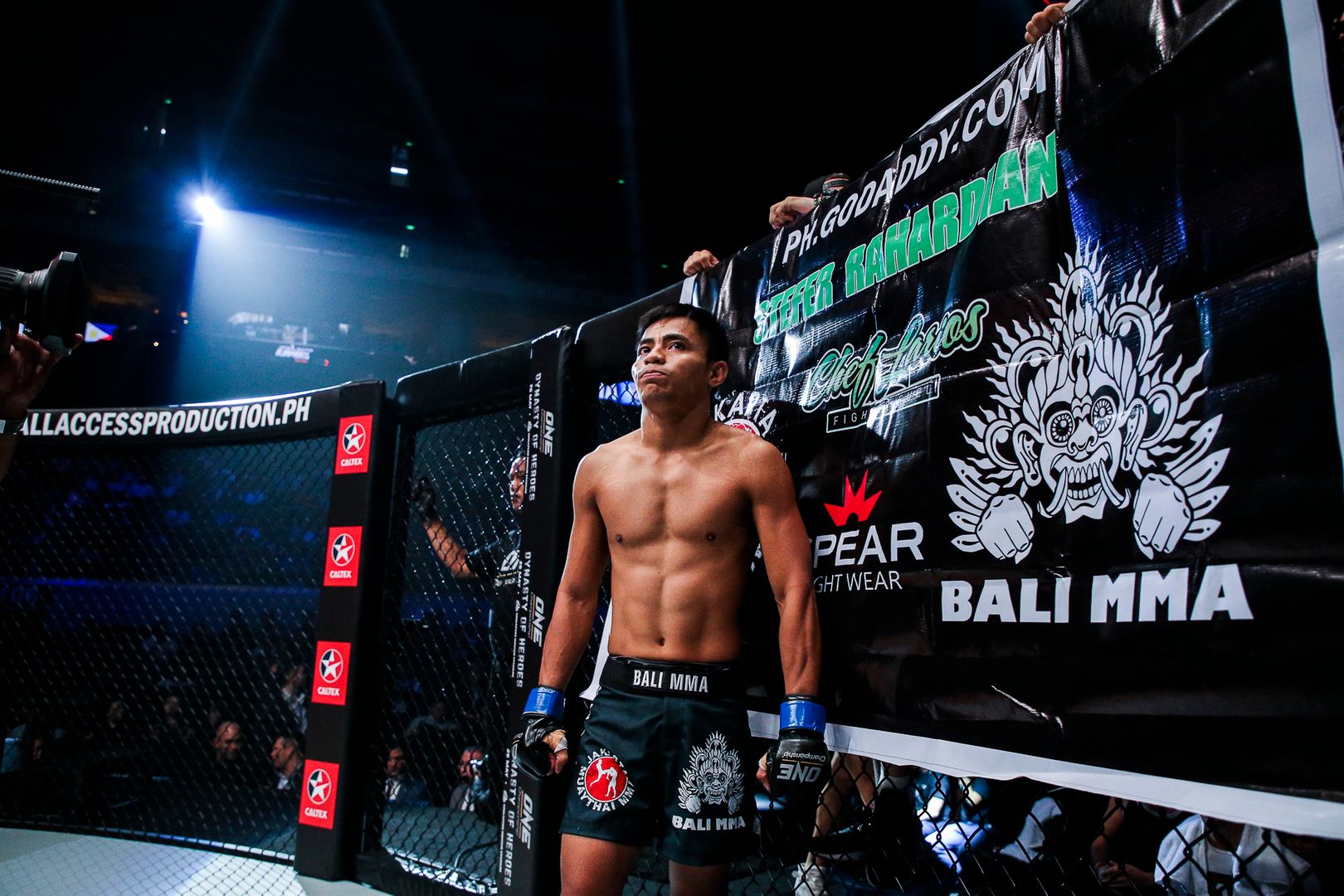 With one obstacle out of the way, Rahardian now had the even more daunting prospect of competing in his first professional contest in front of a hometown crowd.

Suwardi was a formidable opponent and brought a lot of skills to the table, too. But Rahardian made the most of his strategy in order to secure the victory.

“I was trying to hide my weakness. I was already good at grappling, but my opponent was more experienced since he learned BJJ earlier than me,” the Bali MMA representative says.

“Andrew told me to learn boxing and [showed me] how to set up a takedown. Boxing skill is key if you want to execute a takedown. I knew he was slick and could come out with an unexpected look.

“The game plan turned out to work well. We exchanged strikes in the opening stanza and he attempted a triangle and an armbar, but I managed to escape. In the second round, I increased the pace and pressure until I got to the back mount position to execute the rear-naked choke.”

Rahardian was ecstatic with his victory. His hard work had paid off against seemingly insurmountable odds.

He entered the less experienced of the two men, and had a huge battle on his hands just to make it to event night. But in the end, he managed to come away with the submission win.

“I think I was the underdog, yet I flipped the script. I dared to take the challenge because I wanted to step up. This was my way. I had to take that opportunity,” he asserts.

“At that time, I had just recovered from a leg injury and many people thought that I was done. For many people, [that kind of injury] was a disaster. For me, it’s inevitable, and that’s the risk of being an athlete. I couldn’t just accept that I was done.” 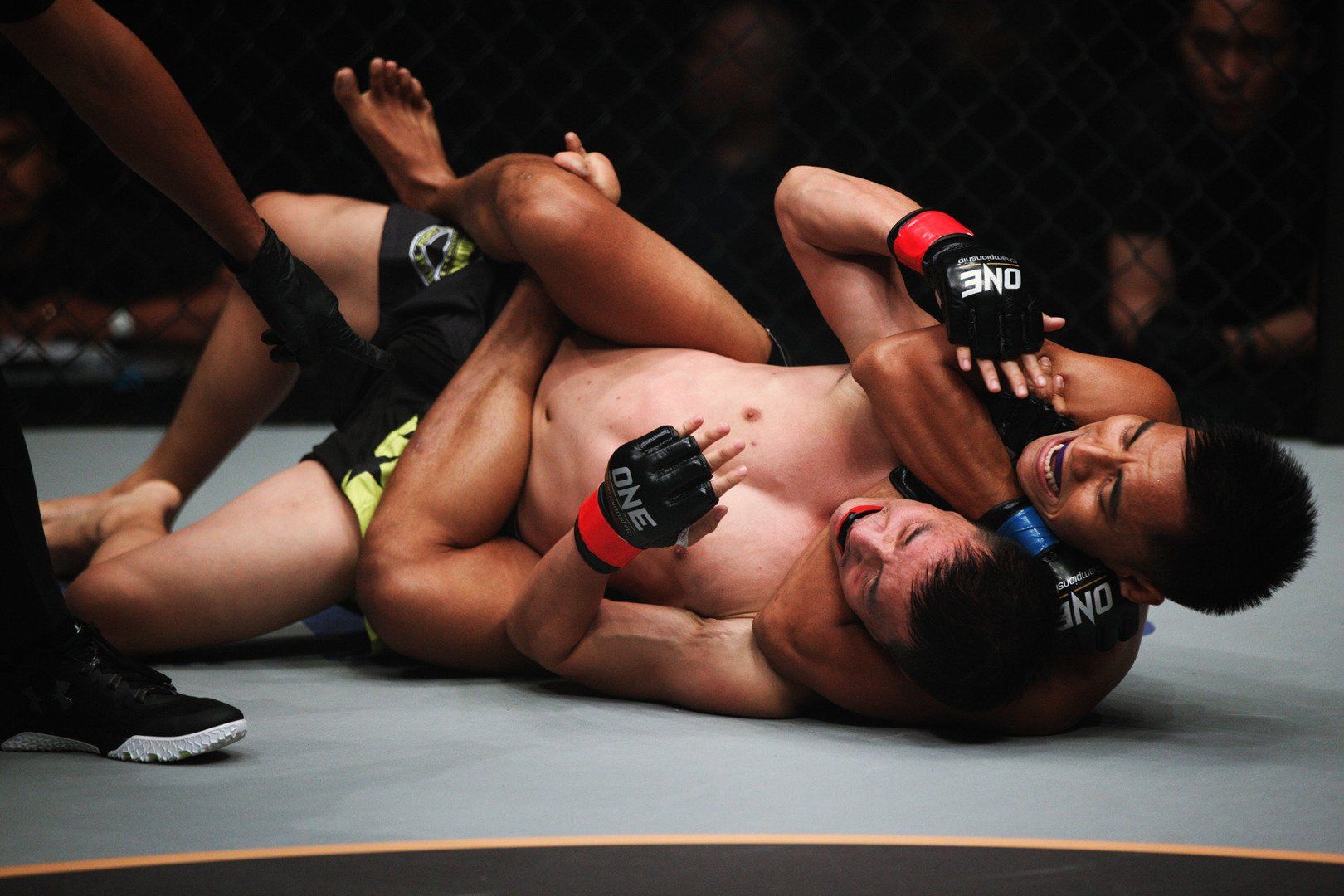 “The Lion” followed up that victory with a title win at another local event in 2016, and his victories caught the attention of ONE Championship’s matchmakers.

They invited Rahardian to enter the ONE Jakarta Flyweight Tournament in August 2016, where he bagged a pair of rear-naked choke wins on the same night to earn the tournament’s crown. In the process, he solidified his spot on the world’s largest martial arts organization’s roster.

However, without the impressive performance in his debut, the wheels would not have been set in motion, so it still stands out as one of the most important nights of his career to date.

“It was monumental for me as I could make a name for myself because of that,” he says.

“After [my debut win], there was another title shot in IBC [Indonesia Badass Championship] in 2016, and I managed to win that as well. Those two victories were what brought me here.

“I continued the streak by winning the ONE Jakarta Flyweight Tournament that year. ONE wouldn’t have noticed me if not for those victories.”