From overcoming the toughest battles in the ring to surviving a life-threatening bout with cancer, multi-time Muay Thai World Champion Singtongnoi Por Telakun (220-80) is widely regarded as one of the greatest kickboxers of his era.

This Friday, 18 May, three years following his retirement from active competition, the living legend plans to make a triumphant return at ONE: UNSTOPPABLE DREAMS in Singapore.

Singtongnoi will face WBC Muay Thai Super Bantamweight World Champion Joseph “Hurricane” Lasiri in a ONE Super Series Muay Thai bout, which will be contested in the flyweight division.

Before he makes his return, learn a little bit more about the 37-year-old Thai warrior.

An Upbringing Full Of Responsibility

This World Champion conquered cancer just 12 months ago. Now, he wants to conquer ONE Championship.

This World Champion conquered cancer just 12 months ago. Now, he wants to conquer ONE Championship.Singapore | 18 May | LIVE and FREE on the ONE Super App: http://bit.ly/ONESuperApp | TV: Check local listings for global broadcast | Tickets: http://bit.ly/oneunstoppable18

The eldest of three siblings, Singtongnoi grew up in the province of Nakhon Ratchasima in Thailand’s countryside, and was raised in extreme poverty. His parents worked on a local farm and made little money, struggling to put food on the table each night.

As a result, responsibility was thrust upon Singtongnoi at an early age. Some of his many responsibilities included helping his father and mother with odd jobs, harvesting rice in the fields, and taking care of his two younger brothers.

“I would help out to lighten my parents’ workload,” he explains.

“Life was tough from what I saw. My mom had to wake up at 5am every day to make food for the rest of the family. After that, she would leave for work at 8am, and return at around 5 or 6pm. I would see her exhausted, coming home tired every day. I felt sorry for her.”

Singtongnoi desperately wanted to help his family out of their difficult financial situation, and felt he could do that with Muay Thai. He was introduced to the sport by his dad, Kiew, who happened to be a former Muay Thai practitioner.

The Makings Of A Legend When Singtongnoi was 10 years of age, he started his training. His father hung up a used bag of fertilizer on a tamarind tree, which served as a makeshift heavy bag for him to practice his combinations.

After guiding his son’s development, Kiew saw incredible potential, and made the decision to send his child to train at one of the province’s bigger camps.

“Going into camp for the first time, I was scared and shy. But when I saw the famous fighters training, I wanted to be like them,”Singtongnoi says.

“It was a mix of fear, excitement, and nervousness. Once I started getting good, I started to make a name for myself, and began to believe that I had a future in Muay Thai.”

Coaches and trainers described Singtongnoi as a loyal, hardworking, and devoted young athlete who was committed to finding a way to win every match. He was ambitious, driven, and focused on always improving his skills.

Singtongnoi helped pull his family out of extreme poverty by sharing some of his earnings with them. Not only were his parents proud of his accomplishments, they were also his biggest fans.

“My dad is crazy about Muay Thai, so he was very happy that I was able to become a world champion,” he explains. “My mom would also come visit me in camp often, almost every day when I first moved there. I was lucky to have the support from my parents. It meant a lot to me.” 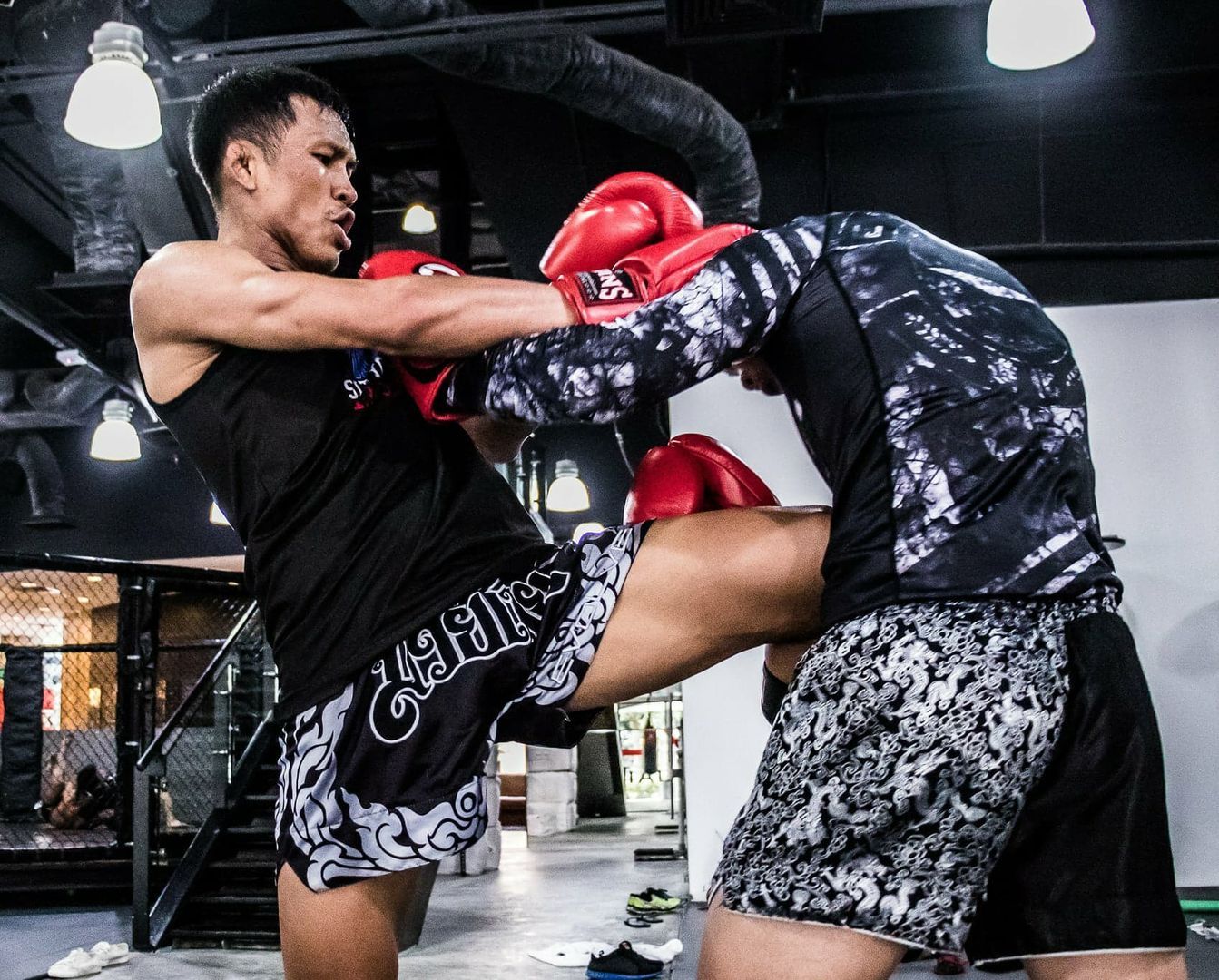 Father Time eventually caught up to Singtongnoi, and he retired from competition in 2015. He returned to his old life on the countryside, where he sold goat’s milk at local festivals to make money. But soon, poverty crept back into his life.

“In the Muay Thai world, I was considered someone who had been fighting for a long time,” he offers.

“[During] my last fight, I broke my rib, and was sidelined. Because of the long layoff, I decided it was time to retire. Now that I was not fighting, I had no income. Life was tough. I made okay money, but it was not enough to survive as I had a lot of debts.”

Just as things were starting to look bleak for the legend, he received a call that would change his life forever. He was invited to relocate to Singapore, and join the world-class instructor team at Evolve MMA.

That opportunity meant that he would again have the chance to give his family a better life.

“I suddenly had so much hope,” says Singtongnoi, now a father of two. “I could now see a bright future, and know that my kids’ futures would be better.”

A Battle With Cancer 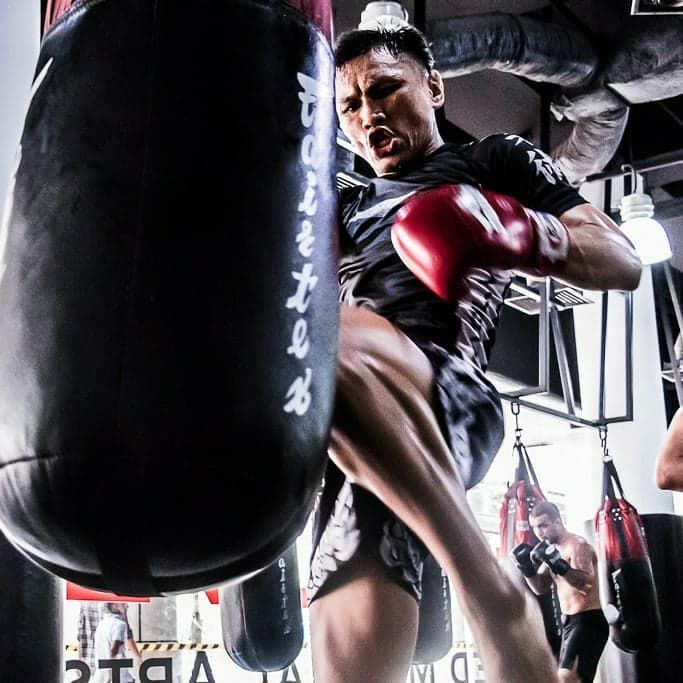 Sintongnoi was retired from competition, and happily taught Muay Thai to a new generation of athletes. But the battle of his life was right around the corner.

In August 2016, he was diagnosed with cancer. A two-centimeter long tumor was found in his nasal cavity.

“From having a bright, perfect future with many plans, as soon as the doctor told me I had cancer, they all disappeared. I thought I was going to die, for sure,” the Thai admits.

Thankfully, he had the support of his peers at Evolve. During his first week of treatment, he could barely eat, and he lost 5kg. He had very low energy, and mostly slept.

“There were points during my treatment where I wanted to quit,” he continues. “But what made me fight was thinking about my children’s future, and the people that I loved. I could not quit, as I had to fight for them.”

After enduring 36 sessions of radiation therapy, and seven sessions of chemotherapy, his doctor declared him cancer-free. Now, Singtongnoi is resuming his career under the ONE Championship banner. He will make his promotional debut at ONE: UNSTOPPABLE DREAMS in his adopted home of Singapore.

“I am excited to showcase my talent to a global audience for the first time,” the Thai says. “I feel like it is my first time fighting again. It is making me very excited. But I promise to do my best when I step into the cage. It is going to be the start of a new and beautiful thing for me.”

Heading into his first match in nearly three years, Singtongnoi cannot help but feel motivated and excited to be able to compete once again.

The Thai meets Lasiri (31-6), a WBC Muay Thai Super Bantamweight World Champion who is looking to make a strong impression. The Italian striker met Singtongnoi’s Evolve teammate Sam-A Gaiyanghadao last January in the promotion’s inaugural Muay Thai bout, but lost via TKO in the second round.

For Lasiri, this is a chance at redemption, but it is a chance for a career rebirth for Singtongnoi.

“I am just excited to perform in front of the crowd again,” the Thai says. “After beating cancer and returning to good health, I feel lucky to have the opportunity to compete in ONE Championship, and return to what I love.”