Robin “The Ilonggo” Catalan did not originally intend to compete at ONE: BATTLE FOR THE HEAVENS in China’s Guangzhou Tianhe Gymnasium.

The Filipino had scaled back his usual training regimen in order to coach some of his Catalan Fighting System (CFS) teammates at regional shows.

However, in late June, his plans changed. 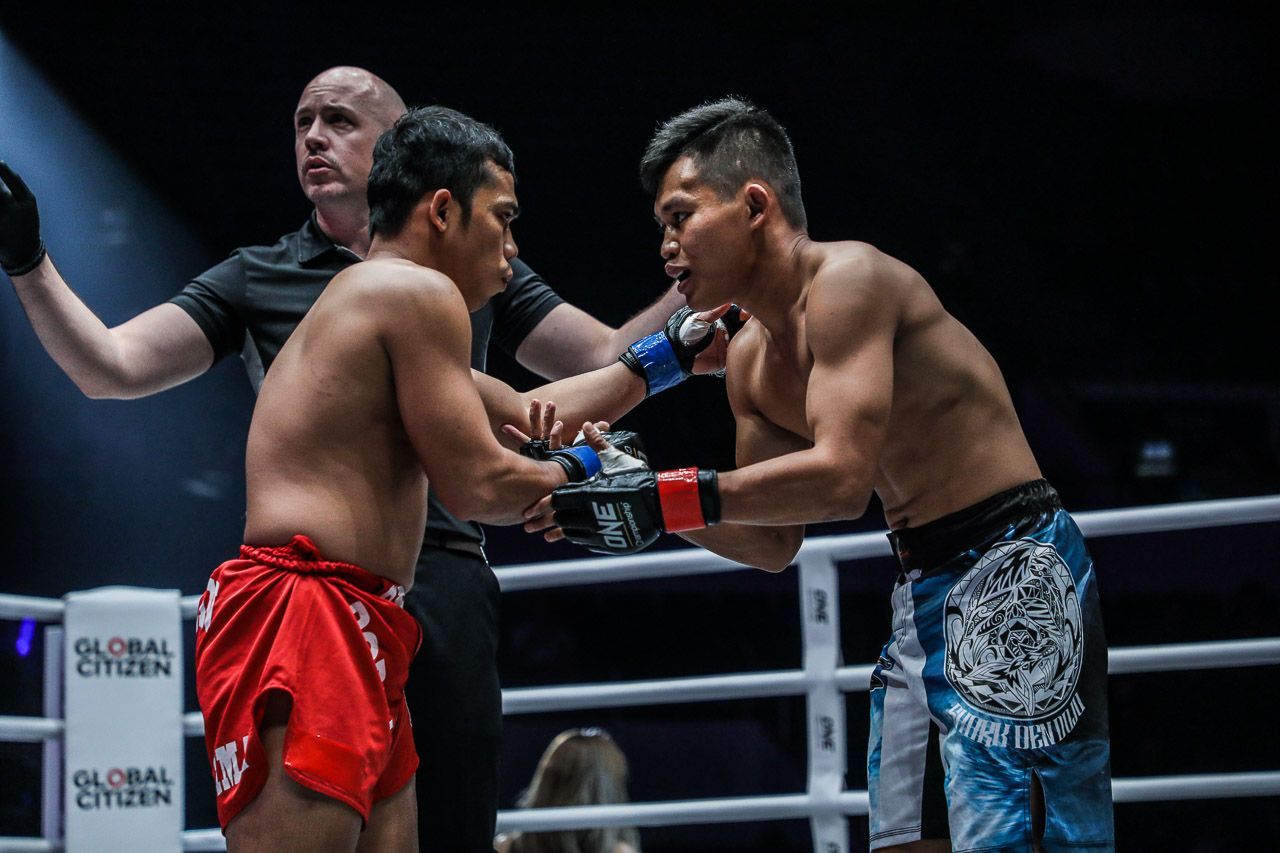 One of his brothers was forced to withdraw from his scheduled tilt with Indonesian strawweight Adrian “Papua Badboy” Mattheis, so “The Ilonggo” was asked to step up.

“It was supposed to be Rabin who was going to compete,” the 27-year-old Makati City, Philippines resident explains.

“However, he encountered some difficulty, so kuya (big brother, Rene Catalan) told me that I would be competing instead.”

The limited preparation time did not faze him, though. He focused on maximizing the few days he had to prepare for battle, and formulate a game plan with Rene. 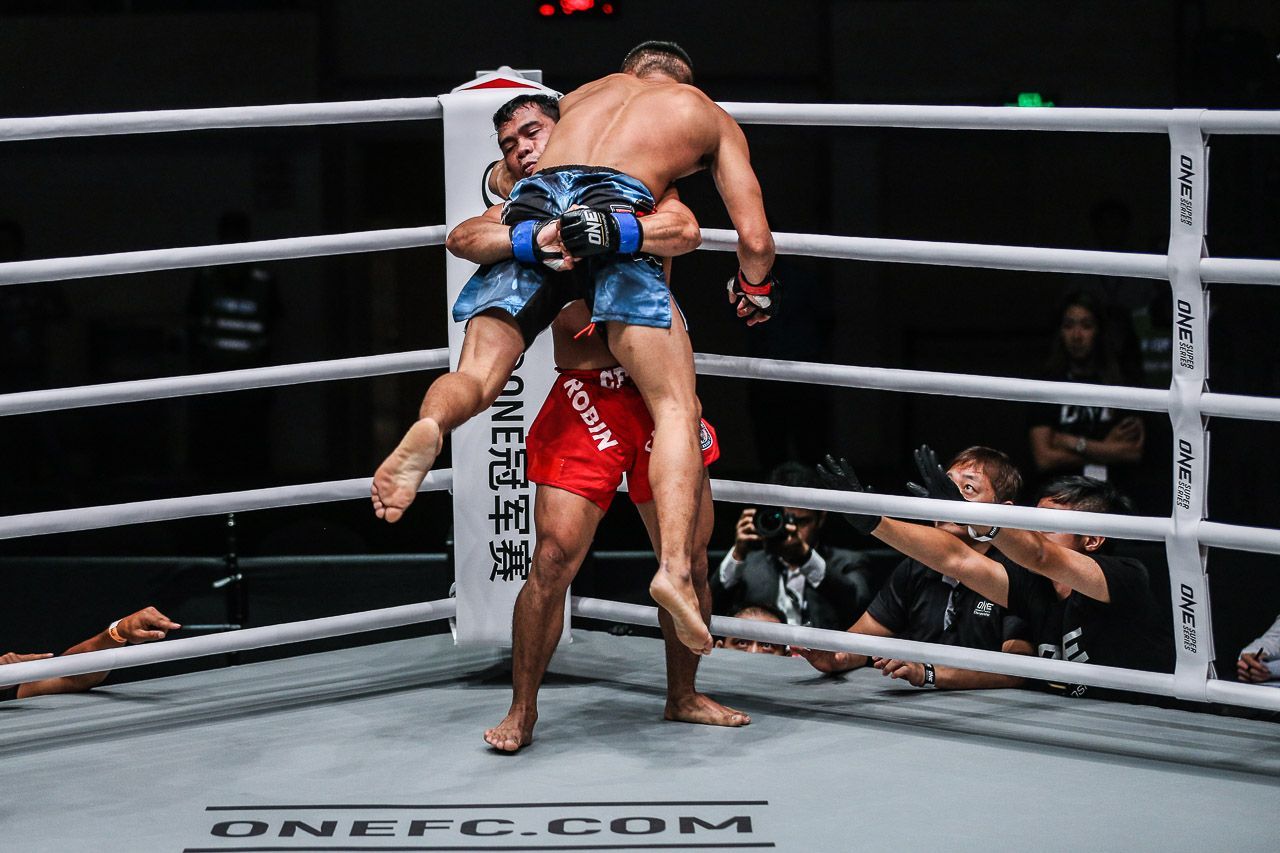 Since his elder brother had once defeated “Papua Badboy,” they went back to the tape to see what was effective, and the brothers found a few holes they could exploit in the Indonesian’s game.

“I watched his match against kuya, and emulated his style against Mattheis. I thought I was a stronger wrestler, and I had an advantage on experience,” Catalan says.

“So wrestling and submissions were the main focus of our strategy against him. If I was not able to submit him, I would dominate him on the ground. Even if it went all the way to the scorecards, we focused on winning every round with that.”

Their game plan worked to perfection.

Catalan utilized his grappling, and he took Mattheis down at will. The end came at 2:10 of round two, as the Filipino brilliantly snatched onto a heel hook to force his adversary to tap out. The CFS product earned his first stoppage victory in ONE Championship, and improved his record to 8-3.

“I am overjoyed. I did not expect that I would be able to win this way. I was able to execute the game plan perfectly, and even locked in a submission I have been working on,” the Filipino says.

“I practiced that move every day whenever we grappled. I actually did that in my first match against Jeremy Miado. This is the third time in my career that I was able to win with that move, but my opponent did not expect that I would do that against him.”

Despite his impressive victory, Catalan remains humble, and he believes he is still two or three wins away from being considered a top contender in the strawweight division.

Although he acknowledges fellow countryman and Team Lakay member Joshua Pacio is one of the weight class’ best athletes, he would not want to face him unless it was for the ONE Strawweight World Title, which is currently held by Yoshitaka “Nobita” Naito.

Instead, “The Ilonggo” wants to support his compatriots in all of their endeavors, whether they are a strawweight or not.

“Pacio is one of the best in our division right now. However, I am not hoping to face him in a Filipino versus Filipino match-up, as I would rather face international competition,” he explains.

“I am looking forward to seeing us Filipinos rising to the top together, and if we were to face each other, then hopefully it is for the World Title.”

While Catalan is willing to “take on anyone,” he admits he would like an opportunity to redeem himself against a pair of former ONE Strawweight World Champions who previously defeated him.

Alex “Little Rock” Silva submitted the CFS product in March 2016 via arm-triangle choke in the first round, and then Dejdamrong Sor Amnuaysirichoke pulled off a second-round TKO last August.

“The Ilonggo” has already returned to training, and he will be prepared to compete again as early as September.

Whether he faces Silva, Amnuaysirichoke, or someone else next is up to ONE’s matchmaking committee.

Catalan is always ready, as he proved earlier this month.