Reece “Lightning” McLaren has been an underdog throughout his entire MMA career, but now, he is one crucial upset away from becoming the king of the bantamweight division.

On Friday Night, 2 December, the Filipino-Australian will battle ONE Bantamweight World Champion Bibiano “The Flash” Fernandes for the belt in the co-main event of ONE: AGE OF DOMINATION, which broadcasts live from Manila’s Mall Of Asia Arena in the Philippines.

“Bibiano and I match well. We are both black belts in Brazilian jiu-jitsu. I think it is going to come down to a war of attrition,” the 25-year-old says.” The perfect outcome for me would be winning the title in Manila.”

The Brazilian is a breed apart though. Fernandes, who trains out of AMC Pankration alongside one of the world’s best mixed martial artists in Demetrious Johnson, is a talented striker and a multi-time World Jiu-Jitsu and Pan American Championship black belt gold medalist.

Currently in possession of a stellar 19-3 MMA record, “The Flash” is riding an incredible 11-fight win streak and has not lost a bout in six years.

“My opponent Bibiano Fernandes is an absolute beast,” the challenger admits. “Bibiano’s strengths are his ground game. He was the 2003, 2004, and 2005 (BJJ) world champion. He is definitely bringing in a world champion jiujitsu game.

“I think his weaknesses are very few and far between. He has got good stand up, he has got a good ground game. We will just have to see what happens.”

However, despite his experience, Fernandes still seems to be getting better with age. McLaren has been constantly improving too, though. He has earned a reputation of rising above expectations and coming out on top. In a way, it is the story of his life. Growing up on Christmas Island, McLaren was raised by a single mother, and like most rambunctious adolescents, did not enjoy school. He did, however, love practicing martial arts, and channeled all his energy at the local kung fu club.

Later, in his teens, he worked for the local airport and became friends with the head of security, who taught him a little Muay Thai and introduced him to BJJ and MMA. The young Aussie was hooked instantly.

“They say that if you choose a job that you love that you will never have to work a day in your life. I think that rings true,” McLaren admits. “I think if you do what you love, then you will love what you do.”

When “Lightning” relocated to Australia’s mainland, he immediately sought out training and ended up at the Gold Coast’s Potential Unlimited Mixed Martial Arts. He has diligently worked with his coaches and teammates since.

Still, hard work does not ensure success, and he was considered an underdog heading into his professional debut back in 2010. But that is exactly where the upset king developed his knack for turning scripts on their head.

“My very first upset, or victory, was my very first fight,” he recalls. “I was fighting in a country town and I had to fight the local boy down in the Gold Coast, and I walked away with the victory.”

In his young career, McLaren has amassed a 9-3 record, capturing the XFC Bantamweight Championship in thrilling fashion. ONE paid attention, and offered him a contract. 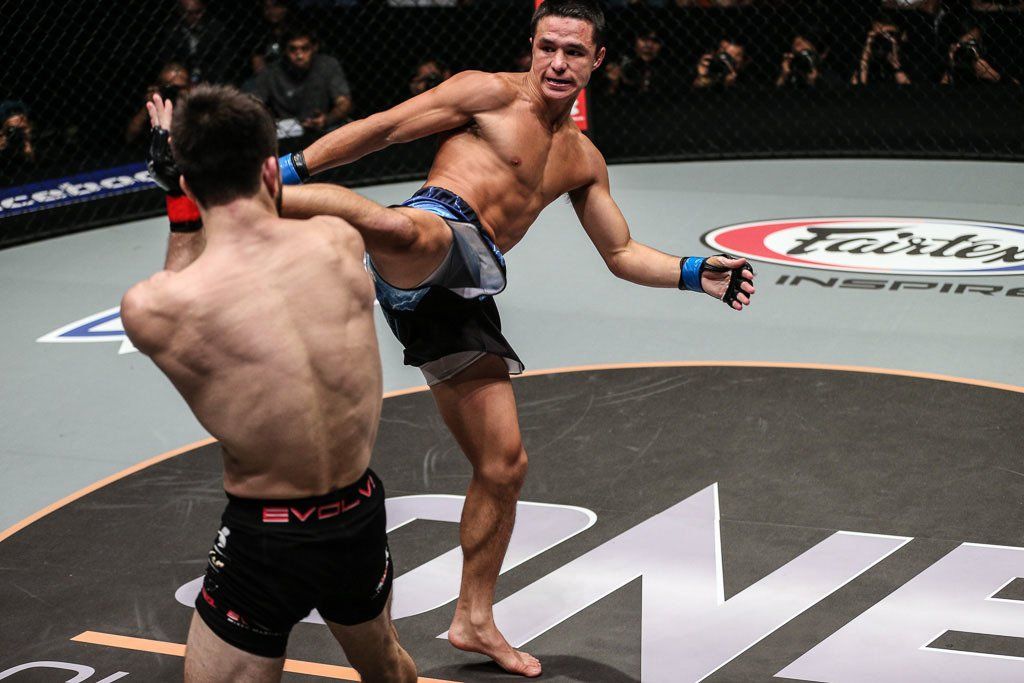 In December 2015, he fought Filipino MMA star Mark “Mugen” Striegl at ONE: SPIRIT OF CHAMPIONS in Striegl’s home country of the Philippines at just a week’s notice. Though the Evolve MMA product was heavily favored, “Lightning” defied the odds and put him away in the third round with a rear-naked choke.

“The Mark Striegl fight was an absolute battle,” McLaren recalls. “It was hard for both of us, I would say. I took it on eight days notice. Eight days notice for Striegl to have a new opponent is super challenging. We both went in there and I was lucky enough to come away with the result.”

Some could dismiss it as a fluke, considering Striegl fixated a training camp around a particular opponent only to fight a replacement eight days out. The Australian still had a lot to prove, and was given a stiffer test when he was put against then-undefeated combat sambo world champion Muin Gafurov at ONE: GLOBAL RIVALS this past April.

Again, despite the odds, McLaren pulled out a unanimous decision victory and spoiled yet another superstar-in-the-making. It would turn out to be the biggest win of his career, earning him a shot at ONE bantamweight gold.

Though pulling off the upset has become McLaren’s forte, “The Flash” is no ordinary opponent. He is the undisputed best bantamweight mixed martial artist in all of Asia, if not the world, so dethroning the champ would be the biggest underdog story of all.

“I find no difference between being the favorite or the underdog,” McLaren says. “Everyone loves the underdog story and they love it when he wins, so give me that label and I will run with it. In addition, McLaren is heartened by recent events involving another huge underdog in a world title fight. Filipino contender Eduard Folayang recently prevailed against overwhelming favorite and MMA legend Shinya Aoki to become the ONE Lightweight World Champion at ONE: DEFENDING HONOR in Singapore.

McLaren sees the parallels he shares with Folayang, and it has given him added impetus going into his bout with Fernandes.

“I saw the Eduard fight and I drew a lot of inspiration from it. Another fellow Filipino winning a world title shows that it can be done.

“I was on the edge of my seat. It was such a massive opportunity for him, and to see him walk away with the victory was just so inspirational.”

If McLaren has it his way, the one walking away with the victory and the belt in Manila would be him, and he is fully prepared to seize his own destiny.

“My game plan is to go in there, give 110 per cent, and bring the title back to Australia.”