Muay Thai superstar Sam-A Gaiyanghadao has added to his legendary status since joining ONE Super Series, but his magnificent run in the promotion almost never came to be.

The 37-year-old — who will defend his ONE Strawweight Muay Thai World Title against Prajanchai PK.Saenchai Muaythaigym at ONE: BATTLEGROUND on Friday, 30 July — hung up his gloves five years ago to switch lanes and become a trainer.

The Thailand native had become a famous World Champion in his home country, but he felt like he’d reached the end of the road in his own competitive career.

Despite earning multiple Lumpinee Stadium Muay Thai World Titles and a Sports Authority Of Thailand Fighter of the Year accolade, Sam-A’s utter dominance saw him run out of interesting opportunities.

“Everyone knew me. They knew me anywhere I went. I felt happy. And people came to see me, but it was not my victory which they wanted to see,” he says.

“They were curious about which style of Muay Thai could defeat me. The challenge motivated me to train harder and keep my body conditioned all the time. I was excited at that time.

“[When I decided to retire] I felt bored about fighting in Thailand. I was looking for something new. It was hard for me to find contenders in the same weight class. I had to fight with the bigger fighters.” 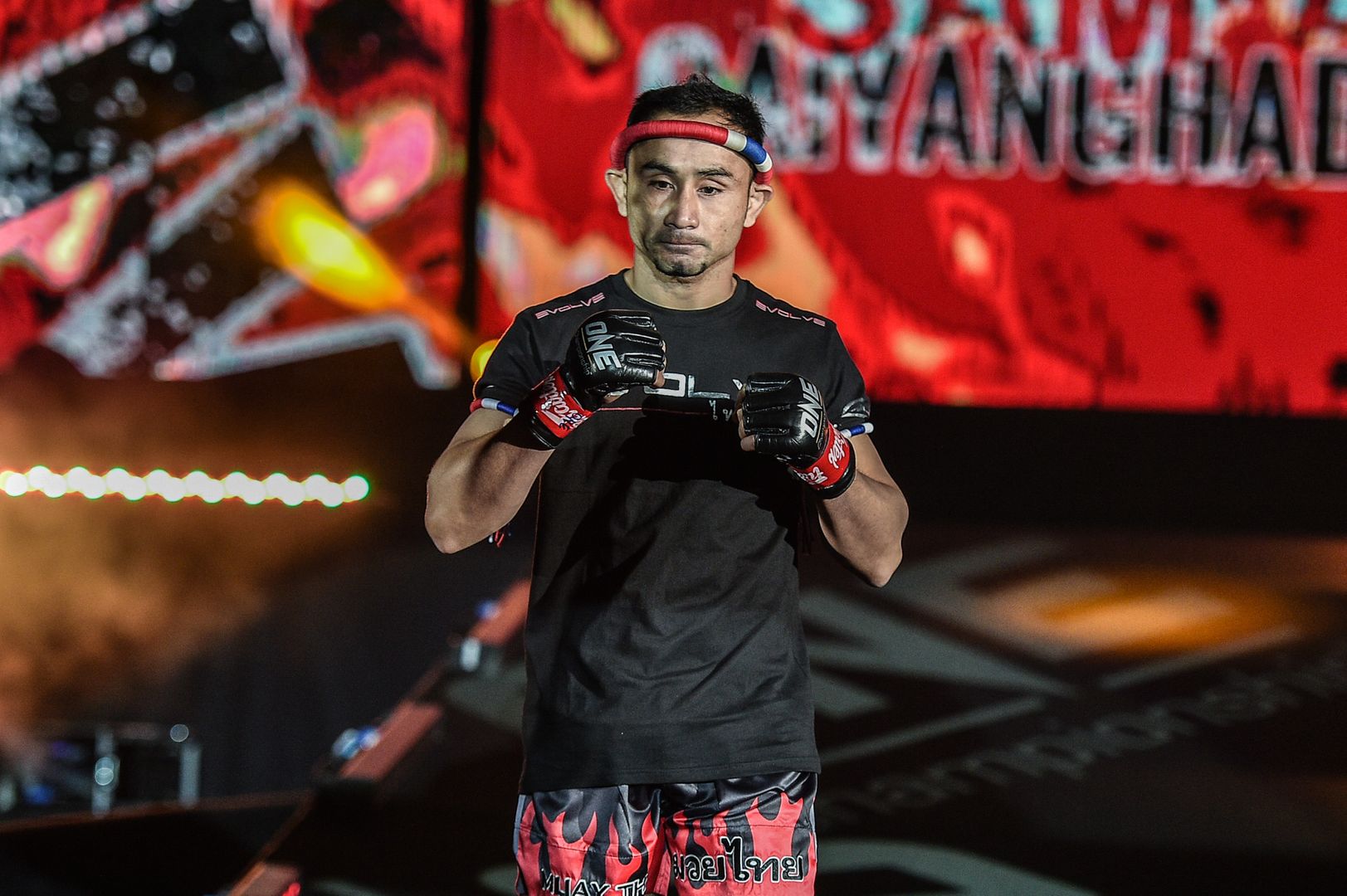 Though Sam-A has shown that age is just a number with recent wins over much younger rivals, he was also worried about his longevity, which ultimately cemented his decision to walk away.

“The other thing was my age,” he says. “I felt that I was too old. I realized that fighting with the younger and bigger contenders would ruin my body faster, and I would not be able to work for long. So, I retired from being a fighter and started to work as a trainer.”

Sam-A moved to Singapore to teach at Evolve. It was a lucrative position that meant he could provide well for his family, but the change of scenery also reignited his flame.

The Thai star’s time away from the ring allowed him to catch his breath and recover. And working with up-and-coming athletes gave him a renewed hunger for competition.

“I started my career as a trainer and I felt that I had enough time to exercise and take a rest. So, I felt that I wanted to fight again. I was burning with enthusiasm,” Sam-A says.

“During the time I was teaching my students, I still had time for body conditioning. I found that I could still fight, so I felt that I wanted to come back to the ring again.”

Many of Sam-A’s students were competing in ONE Championship, which was only holding mixed martial arts contests at that time.

But when the chance to become a pioneer for striking sports on the global stage came, the Singapore resident jumped at his opportunity. Sam-A took part in the first-ever stand-up bout in ONE history against Joseph “The Hurricane” Lasiri in January 2018.

“I felt glad that I was the one who opened the door for the next generation because ONE Championship previously had only MMA. I was the first generation that expanded ONE into Muay Thai for more fighters and fans. I felt proud of it,” the Thai icon says.

Even then, Sam-A didn’t think he’d be challenging for more World Titles — let alone three of them in two sports and two weight classes.

The 37-year-old just wanted to compete, but he blew through the opposition until he got the chance to fight for the ONE Flyweight Muay Thai World Title – the inaugural ONE Super Series World Championship – against Sergio “Samurai” Wielzen in May 2018.

“But when I got the chance to challenge for the championship, it exceeded my expectation. From the fact that I was a retired fighter, then I became a trainer, and I got an opportunity to fight for the title from ONE Championship – a world-class organization – I felt extremely happy.

“Then I successfully made it. My pride became bigger when I grabbed the championship belt, the first belt from ONE Super Series. I was speechless and I felt very proud of that fight.”

Sam-A would slip up against Jonathan “The General” Haggerty, but he then moved down to compete with opponents closer to his own size, and he has not looked back.

The veteran has gone 4-0 in the new weight class, winning the ONE Strawweight Kickboxing and Muay Thai World Championships in the process.

For a man who’s earned so many accolades over the course of his storied career, returning from retirement to dominate in the world’s largest martial arts organization has been his favorite achievement of all. But still, he’s not done yet.

The challengers keep on coming. They’re fresh, exciting, and keep Sam-A motivated to continue improving and competing. Moreover, the legend has no intention of passing the torch just yet.

“Being the champion of ONE Championship is the most important title in my career because the organization itself is very big and well known. Now that I have the championship title, I will keep it with me as long as I can,” he says.

“If you think you can take it from my waist easily, you are wrong. It was hard for me to grab it. I have been through many things before it. And if you think that I will simply give it to you, this is impossible.

“You must come to see me first. We must fight, and I will go all out for it.”

Read more: How To Watch ONE: BATTLEGROUND Live On 30 July