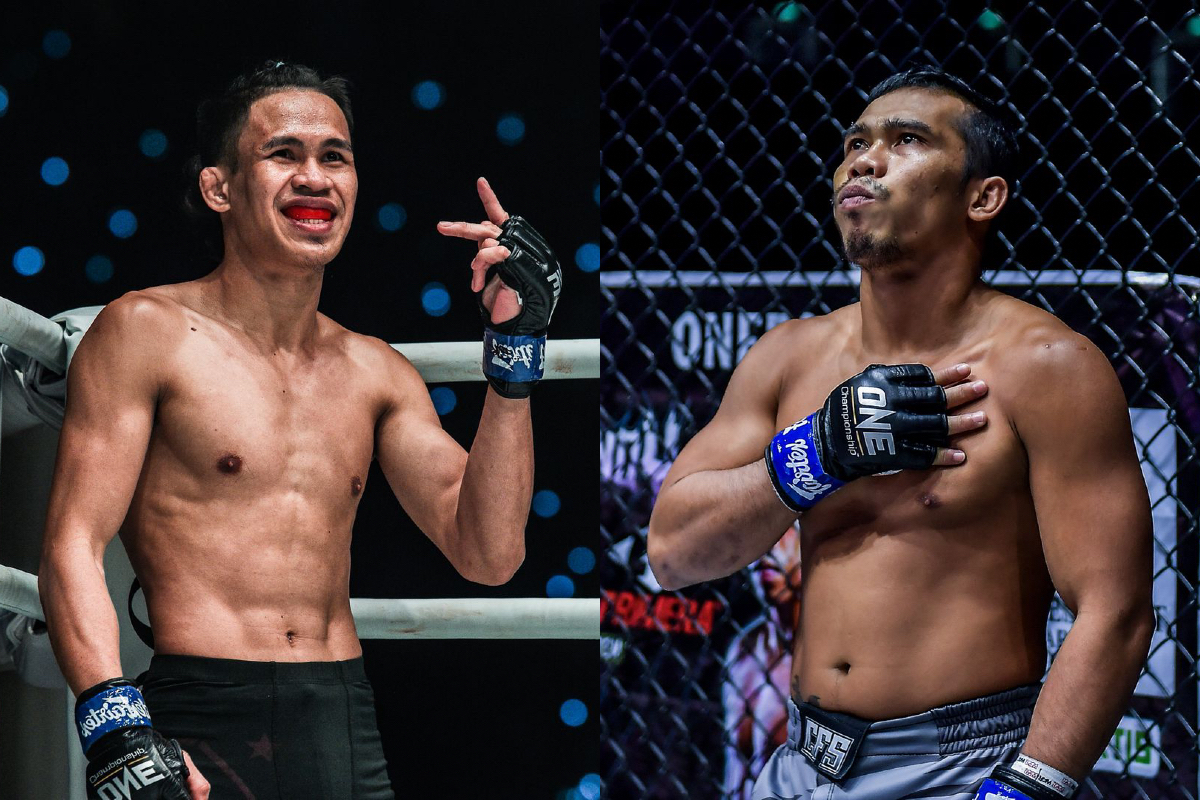 ONE Championship strawweight standouts Jeremy Miado and Robin Catalan began their martial arts journeys as fierce competitors. But while their paths initially converged as rivals, they ultimately sparked an incredible friendship.

Now, Catalan will watch closely as Miado faces Lito Adiwang in an all-Filipino MMA matchup at ONE X on Saturday, 26 March.

Ahead of that clash at ONE’s historic 10-year anniversary show, the close compatriots recall their history and look ahead to an exciting night at the Singapore Indoor Stadium.

Miado only picked up boxing at the age of 20 in order to support his family financially.

However, with limited opportunities in the rural Philippine countryside, the 29-year-old soon moved to the nation’s capital of Manila, where he began training in a variety of martial arts disciplines.

After falling in love with Muay Thai and dabbling in wrestling and Brazilian Jiu-Jitsu, “The Jaguar” took up mixed martial arts to tie everything together. That certainly proved to be a wise decision.

The 31-year-old Catalan, on the other hand, was introduced to martial arts at a young age by his father, a former boxer.

In 2006, he decided to take combat sports seriously, following in his older brothers’ footsteps. With that, he pursued a competitive career in wushu, Muay Thai, and ultimately, MMA.

But while Miado and Catalan were drawn to professional fighting for vastly different reasons, they shared the same hunger for competition.

The two athletes first met back in 2015 when they were matched against in other in a local MMA competition in Batangas province.

“The Ilonggo” was cornered by his older brother, Rene, who shouted instructions between rounds in their dialect.

What they didn’t realize was that Miado had grown up right next to their hometown in Iloilo City, which meant they were practically neighbors.

“The Jaguar” tells ONE Championship:

“Before the fight, I knew already that he also came from Iloilo. It was them who didn’t know that I am an Ilonggo as well. When they cornered Robin, they were instructing him in their native language. They didn’t know that I could understand the whole thing.”

Catalan went on to win that fight, but the two competitors connected afterward and shared a chuckle when Miado began talking.

“It was fun. I called him out a bit because I didn’t know he could speak our language,” Catalan says. “We just laughed together because of the whole experience.”

That was the beginning of their friendship. And not long after, they both found themselves competing in the world’s largest martial arts organization.

Squaring Off Again On The Global Stage

After an impressive six-fight winning streak on the regional circuit, Miado caught the attention of ONE Championship, which signed him to a multi-fight contract.

“The Jaguar” then made his promotional debut at ONE: KINGS OF DESTINY in Manila in 2017 – but he never expected to be matched up with Catalan once again.

“Joining ONE has always been one of my goals. So when I first came in and they offered me a chance to compete, even if it was against a Filipino, I didn’t mind. It was ok with me because at least I became part of the promotion.”

Jeremy Miado reflects on his surprising ONE debut against Robin Catalan

Though he preferred not to fight a fellow Filipino, Miado accepted the challenge.

“As a martial artist, this is our job,” he says. “We should expect that any of our friends in this industry would eventually be our opponent, especially if we are in the same bracket.”

At the same time, Catalan also wanted to prove he belonged among the best in the world. So, despite facing a man he now considered a friend, “The Ilonggo” took the fight.

“I just accepted the circumstance,” he says. “It happened in the Philippines, so I thought it made sense to face a fellow Filipino.”

Taking Their Friendship To Another Level

Catalan was victorious over Miado yet again, winning via close split decision after three tough rounds. That was the last time they competed against each other in the Circle.

The two then met again at ONE: IRON WILL in 2018. That evening, Miado and Catalan found themselves facing local Thai superstars, Dejdamrong Sor Amnuaysirichoke and Kritsada Kongsrichai, respectively.

Miado was on a two-fight skid, but he began to work with “The Ilonggo,” who shared insights and strategies about a common foe.

“Before my fight with [Dejdamrong], I talked to [Robin] and asked for some tips because he had faced Dej before. He was gracious enough to share his experience with him and told me [Dejdamrong] didn’t have strong kicks and all that. I felt like he was just trying to make me feel good and ease my nerves.”

The advice from Catalan paid off, as Miado scored his first victory in the Circle – in spectacular fashion no less.

He stopped the legendary Dejdamrong with a highlight-reel right hook that ended matters abruptly in the first round.

Unfortunately, Catalan’s bout with Kongsrichai didn’t go as planned, as the bout ended prematurely when the Filipino was knocked out by an ill-advised slam.

Despite those difficult circumstances, the 31-year-old decided to celebrate “The Jaguar’s” victory with a night out on the town.

“We went out together to get something to eat. He invited me to join him because he was in a bad mood. At that point, Kritsada had been declared the winner,” Miado recalls.

“When they reviewed the fight, they saw that it was an illegal move, so they reversed the decision later. Robin didn’t know that he was declared the winner retroactively, so he was in a bad mood. He bought some drinks to drown out the sorrow. Good thing they changed the decision.”

From there, the Filipino strawweight hopefuls never looked back.

They spent time together whenever they could, especially when they found themselves competing at the same event.

On 26 March at ONE X, Miado will battle another Filipino in #5-ranked strawweight contender Lito Adiwang.

Catalan has sparred with Adiwang in the past, and he knows the Team Lakay ace will bring a dangerous skill set to his bout with “The Jaguar.”

With that in mind, “The Ilonggo” broke down this intriguing MMA matchup:

“I think Jeremy has the reach advantage and his striking will be formidable. I was able to spar with Lito a while back, so I know that Jeremy can hold his own against him. He just has to avoid getting taken to the ground. Team Lakay has been improving their ground game and wrestling.

So Jeremy has to keep this bout on their feet to have the advantage. His boxing is good as well. What I see in Lito is that if he thinks he can finish you, he will go for it. I think it’s 50-50. I don’t have a preference nor am I rooting for anyone because I feel like they’re both strong.”

Nevertheless, Catalan is confident that his friend will put up a good fight, and he thinks fans will witness an action-packed affair that finishes with fireworks.

“It’s going to end in a knockout. They will not back down from each other and will give it everything they have until they’ve squeezed out all the energy they could from themselves,” he adds.

“I think Lito will stand up with Jeremy because he’s not the type to run away from an opponent’s striking, especially because he has the hands for it too. But he shouldn’t be overconfident or else he’s going to get in trouble with Jeremy.” 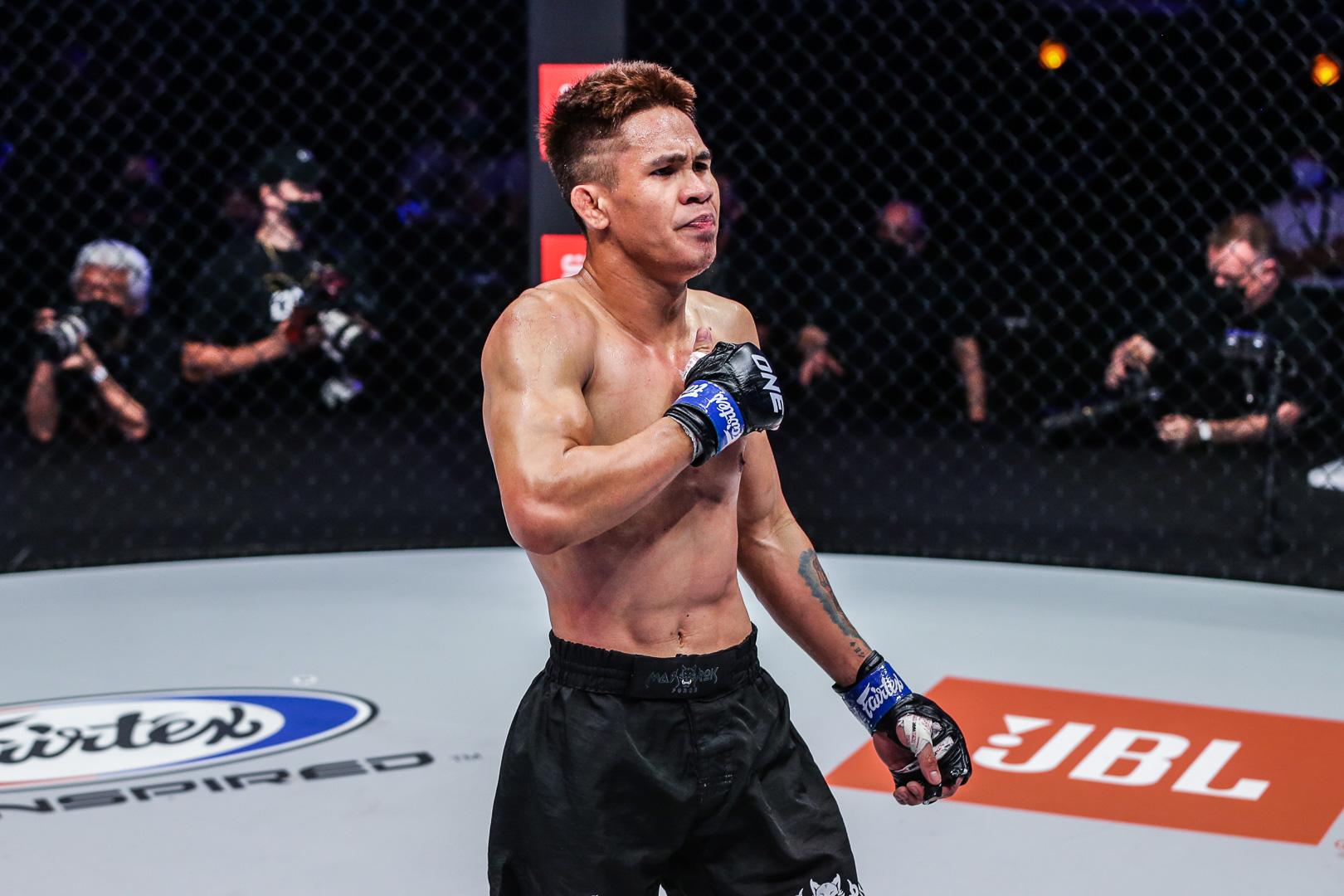