Originally, she was scheduled to challenge ONE Women’s Atomweight World Champion Angela “Unstoppable” Lee for the prestigious title in the headlining bout of ONE: IMMORTAL PURSUIT on Friday, 24 November, at the Singapore Indoor Stadium.

Less than two weeks ago, Lee was involved in a car accident, and the injuries she sustained forced her to regretfully withdraw from the contest. That left Yamaguchi without an opponent, and a bout, for the event. Nonetheless, she was advised  to continue with her training.

“I was told that Angela was in a car accident. I was surprised, but was so glad that she was okay,” the 34-year-old Tokyo, Japan native reveals. “Then, I tried to keep concentrating on my training because I believe that ONE was looking for another opponent.”

Just a few days later, a suitable replacement was found. Although Yamaguchi is not getting the world title rematch she anticipated with Lee, she is still getting the chance to settle an old score.

At ONE: IMMORTAL PURSUIT, she will clash with Team Lakay’s Gina “Conviction” Iniong (6-2). The atomweight bout, which will be on the event’s main card, is a rematch from their first encounter three and a half years ago, where Iniong pulled away with a razor-thin split decision victory.

For Yamaguchi, the situation could not have worked out any better.

“I was glad that Gina answered ‘yes’ to the match on the Singapore card with me,” she says. “I have always looked for a chance for revenge. This is the perfect moment.” 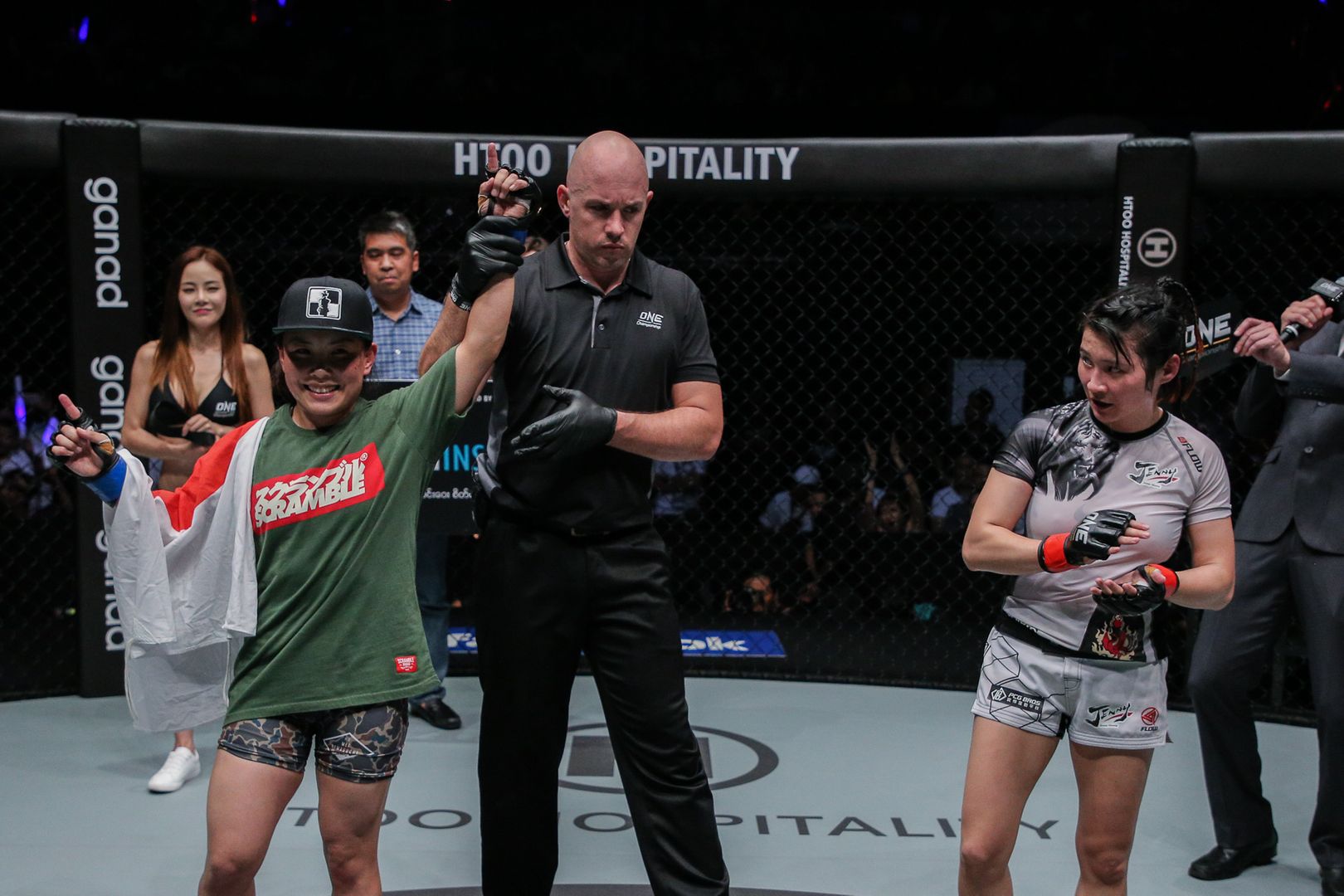 In March 2014, the two battled at a regional show in the Philippines.

They engaged in a thrilling war, as the aggressive Iniong demonstrated her crisp striking, scrambling ability and most importantly, her heart. Yamaguchi threatened early with a tight armbar, and consistently leaned on her grappling and clinch knees against the cage fence.

Although the judges rendered a split decision in favor of Iniong, “V.V.” and her team felt the decision should have gone the other way.

“My image of the last match was Gina getting some points with her boxing, and me with my ground game,” she says. “It was back and forth, but all of my team thought I won.” Ever since then, the two have traveled on completely separate paths.

Yamaguchi captured the DEEP Jewels Featherweight Title in May 2015 before unsuccessfully challenging Lee for the inaugural ONE Women’s Atomweight World Championship in her promotional debut back in May 2016.

After that, she dropped a razor-thin split decision to Istela Nunes three months later, and then tapped out former world title challenger Jenny “Lady GoGo” Huang this past June.

As for Iniong, she took a 14-month break from competition following a loss, before she returned to win via submission before signing with ONE Championship this past April. 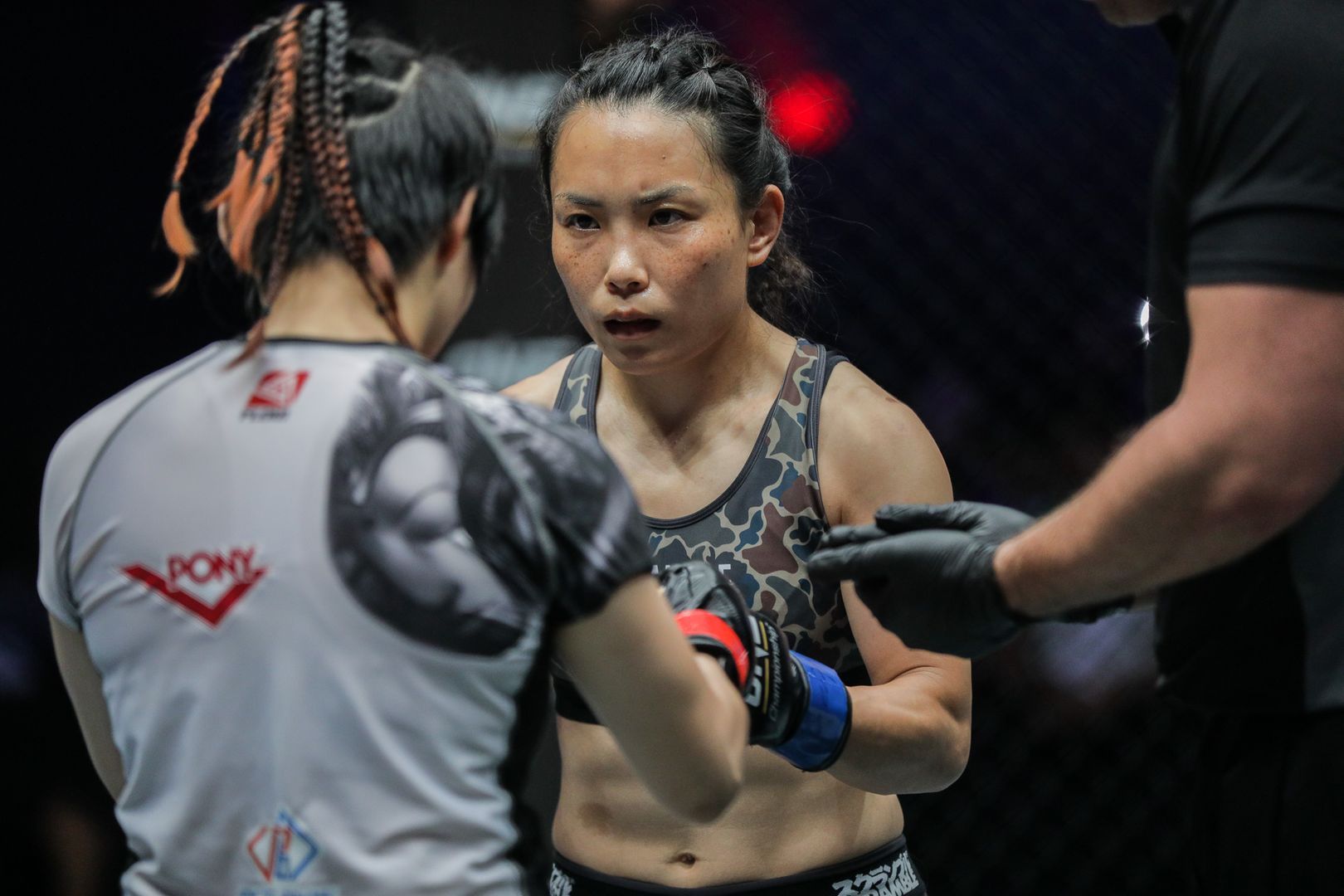 Ever since she debuted on the global stage, “Conviction” has looked absolutely dominant. The 28-year-old Team Lakay product battered Natalie Gonzales Hill en route to a unanimous decision, and then scored a TKO over Priscilla Hertati Lumban Gaol lass than two weeks ago on 10 November at ONE: LEGENDS OF THE WORLD.

Yamaguchi watched Iniong’s recent outing very carefully, and acknowledges her growth as a martial artist. But the Japanese sensation also believes she has vastly improved since their last meeting, too.

“Gina has a really good right hand she throws, and she is strong and physical. I am better with the ground game and improved more in my boxing skills compared to our previous match,” the Tokyo resident says.

“She competed against a good kickboxer recently, was controlling her opponent well on the ground, and was really aggressive. She looked like she won without taking much damage.”

While Yamaguchi had hoped to face Lee at ONE: IMMORTAL PURSUIT and capture the ONE Women’s Atomweight World Championship, those plans have been postponed.

Truth be told, this may be a blessing in disguise. “V.V.” now has the chance to even her account with Iniong, and then get another dose of redemption — and the world title — soon thereafter when Lee is fully healthy.

As a determined Yamaguchi says: “my story will not end here.”