All the quarter-finals are over, and now just four men remain in the ONE Lightweight World Grand Prix.

ONE Championship’s historic tournament has already created a buzz all over the martial arts world after a tremendous first round filled with brilliant battles and some shocking finishes. 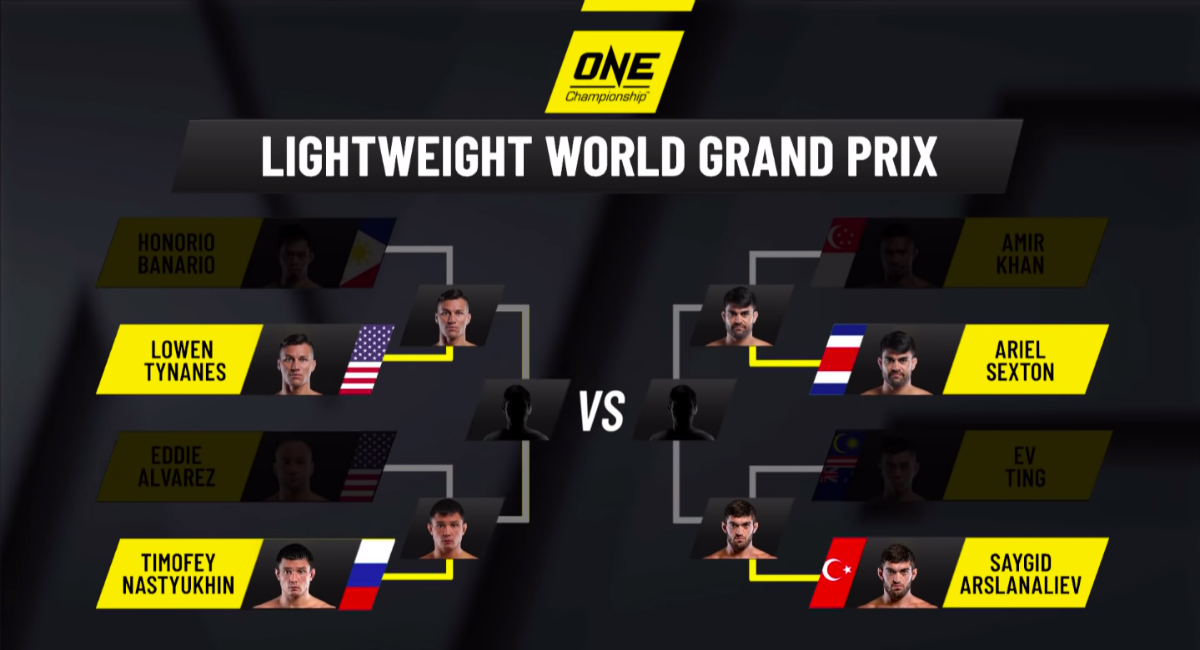 That all left us with two mouth-watering semi-final match-ups – Sexton will meet Arslanaliev in Singapore at ONE: ENTER THE DRAGON, before Tynanes faces Nastyukhin.

As for the final, martial arts fans could discover who the last men standing will be if the remaining competitors can answer these questions.

#1 Can Nastyukhin Find a Home For His Right Hand?

As Alvarez found out to his detriment, Nastyukhin only needs one punch to change the course of a bout.

When he imposes his power, the Russian is capable of finishing any athlete within a round. His quarter-final victim was hardly the first to feel the force of the 29-year-old’s fists.

However, it would be unwise for the Novokuznetsk native to go for broke and throw heavy leather from the opening bell. He was patient against his American opponent and waited for the right opportunity to counter.

When Alvarez was clipped up-close and staggered back, then Nastyukhin exploded with his overhand right and closed the show. If he can find a way to set up his money punch again, he could enjoy another short night at the office.

#2 Will Tynanes Be As Dominant On The Mat?

One thing that is certain to prevent Nastyukhin from getting a knockout is another dominant display of grappling from Tynanes.

In his quarter-final, the American had Banario on the canvas after about 90 seconds, and he never let his adversary return to his feet. It did not ever look likely that he would be able to, either.

The takedown initiated a relentless barrage of ground and pound, but Tynanes was not in a rush. He kept control of his rival, improved his position, and picked his shots well. He inflicted maximum damage as he drained “The Rock’s” gas tank so that by the end of the round, the Filipino was a spent force, and wide open for a TKO finish.

An early takedown and sustained offense like that against Nastyukhin would take him out of harm’s way, put him in a better place for a finish, and wear his rival out to reduce the risk of danger in the later rounds – if the contest goes that far.

#3 Can Sexton Maintain His Momentum?

“Tarzan’s” defeat of Khan was outstanding and proved what a courageous warrior he is. The Costa Rican was always aggressive as he hunted for the finish with his black-belt Brazilian Jiu-Jitsu.

However, he had to battle through adversity after he came perilously close to being stopped by the Singaporean’s strikes in the second-round. Fortunately for him, he got the opportunity to recover, and roared back to seal a third-round submission.

He would do well not to afford “Dagi” the same opportunity. The Turkish titan has never failed to win by stoppage, and he only needs a tiny window of opportunity to claim victory.

Arslanaliev dropped jaws with his 25-second knockout of Ting. No one had doubted his power, but it was the first time fans had seen him finish quite like that.

Normally, “Dagi” has the most success when he leans on his grappling and uses ground and pound to finish or set up a submission.

However, in Sexton, he will face one of the most dangerous grapplers in The Home Of Martial Arts. The 24-year-old is sure to be confident that he can compete with “Tarzan” on the canvas, but he may choose to try and test his chin in the striking exchanges instead.

With back-to-back knockouts under his belt, “Dagi” will now be more confident about landing his blows than ever. Sexton is no slouch in the stand-up, but if he stays upright, his clearest route to victory will be shut.

#5 Does Any Athlete Have What It Takes To Defeat Aoki… Or Lee?

A match with the Japanese legend would be a dream ticket for any of the tournament’s participants, as they would get the chance to compete for gold against one of the greatest competitors in mixed martial arts history.

However, many fans will question what they will have to do to defeat the 35-year-old because he is in imperious form. His last four opponents have failed to make it out of the first round – including Eduard “Landslide” Folayang, who was stifled and submitted for a flawless victory at ONE: A NEW ERA.

One man who could throw a wrench into the works could be Christian “The Warrior” Lee. The featherweight finishing machine has an incredible opportunity to take the top prize in a higher division when he challenges Aoki at ONE: ENTER THE DRAGON.

The tournament contenders may see him as an easier assignment than “Tobikan Judan,” but if he shocks the world in Singapore, they might think twice about that.