As someone who travels so often, I am quickly becoming an encyclopedia of interesting stories and experiences.

These insights make for fun water cooler conversations to have whenever I’m around the office, and I usually can’t resist sprinkling in a line or two about something I learned while on the road. Call it “teacher’s instinct.”

Now that I have my own column, it’s a great opportunity for me to distill my thoughts into words and share them here with you first.

That said, here are some interesting anecdotes and lessons I have for you this week.

A tour around the Muay Thai gyms in Thailand will help explain why. You’ll notice that more and more Thai athletes are doing a great job of converting over from Muay Thai to mixed martial arts.

I think Muay Thai, as an art, lends itself well into a transition to mixed martial arts because their athletes do such a good job of takedown defense and takedowns with the clinch. Unlike other stand-up arts, sweeps and other techniques like that are just naturally built into their system – and they do it very effectively, too.

Stamp Fairtex’s recent success at ONE: DREAMS OF GOLD is a good example, so let me quickly break down her performance to illustrate the versatility of Muay Thai in mixed martial arts. 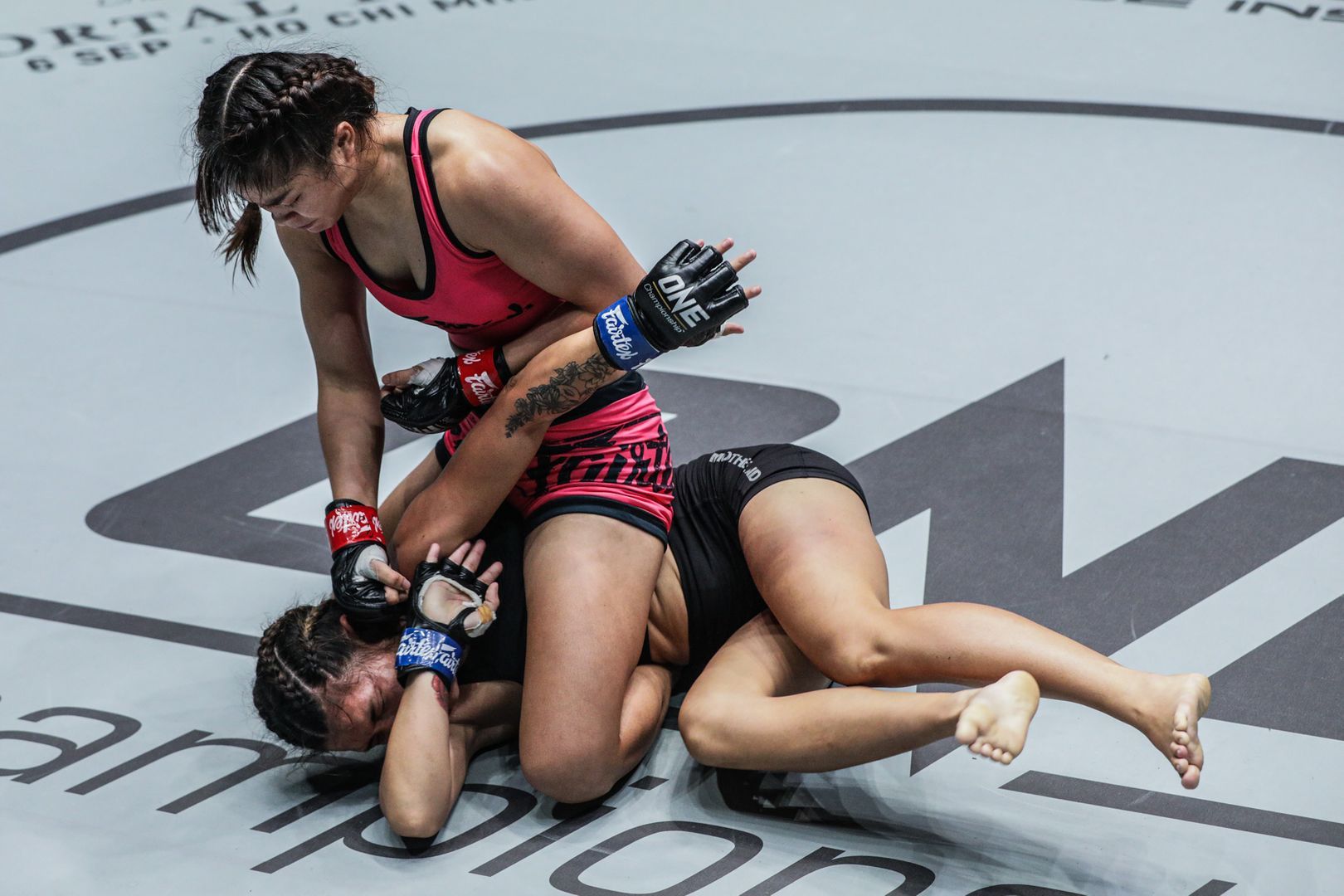 I was excited to watch Stamp compete for the first time in mixed martial arts, and you could tell all the work that she’s put in so far. First of all, credit to Asha Roka – she is a tough opponent. That girl was throwing some good hand combinations and caught Stamp a couple of times on the feet when she was throwing her kicks — not that it put Stamp in any real danger.

It was still a pretty impressive performance from Stamp. She had a great takedown in the first round, and then she went to mount. When Roka was able to exit out the back door with that escape, Stamp immediately transitioned to side mount, maintained top position, and came back to mount again.

You could tell Stamp was willing to take risks in that match because anyone who is new to a sport like mixed martial arts would just sit in the mount and throw strikes.

Instead, she was willing to gamble her position for the armbar attempt in the first round, which shows that she isn’t content to just compete in this sport. She wants to prove that she’s going to be the best.

Overall, I was super impressed with her takedowns. She did a great job parlaying off her Muay Thai skills, using the clinch to bring somebody to the ground. Seeing her get that submission victory at the end was just the icing on the cake.

Stamp may have made it look easy, as if she’s completely relying on her Muay Thai technique. However, that is not the case.

She has clearly put a ton of work into her grappling, with her jiu-jitsu and top side pressure transitions, and a lot of other aspects that are essential for a decent ground game. Without that, it doesn’t matter. There’s simply no substitute for hard work.

In case anyone’s wondering, this isn’t exclusive to Muay Thai or Thailand. Travel to a place like Japan, where judo is an art that is steeped in tradition, and you will find Japanese talents who possess naturally good takedown ability. It is no surprise then why they have enjoyed relatively more international success.

Beyond any doubt, takedown and takedown defense is the difference-maker, especially on this side of the planet. Takedowns allow you to determine when and where the match takes place – whether it stays on the feet or if it goes to the ground. Martial artists who continue to neglect this aspect are putting themselves in a highly disadvantageous position.

Here’s my key takeaway: if the athletes here want to be truly competitive on the international stage, then it is imperative that takedown and takedown defense be at the top of their agenda.

Let me veer into something funny for a change.

As you may well know, OWS does six events and 36 episodes total in a year. Between all our adventures and traveling, there are so many funny moments, even I forget some of the stuff that happens on a trip until we get back and watch all the various outtakes and film. Here’s a recap of one of my favorites.

OWS was in Bali with talented prospect Rengga Raphael and we had a challenge – Jonathan, Rengga, and myself in a three-way cooking competition to recreate Ayam Rica Rica. That dish is a delicacy regional to the North Sulawesi area where the chicken is served with lemongrass, lime leaves, and a grounded blend of spiced chili and peppers. As an American who loves food, I can attest that it’s delicious.

Interestingly enough, the backstory here is that Rengga studied culinary arts in college and eventually gave that up to pursue a career in mixed martial arts. As a native growing up on Ayam Rica Rica, Rengga’s reputation was at stake if he couldn’t replicate the dish to the local flavor.

Going even further back to when Jonathan and I were in Tokyo last year, he cheated me out of our rickshaw pull competition. I didn’t forget that, and back at the challenge, Jonathan foolishly thought we we’re serving Ayam Rica Rica, with no clue that karmic justice was the only item on my menu.

When the challenge started and we each had to go to the market to get our ingredients, he went ahead to the van early, thinking he was going to leave me behind. Huge mistake. I anticipated this and had already pulled out the battery cables from the van earlier. I took off on my scooter, enjoying a beautiful ride and a 20-minute head start.

Pull my self up , so your bitterness and twisted lies can’t pull me down.

That wasn’t enough. After Tokyo, I felt like I needed to thoroughly dominate Jonathan in this challenge. The allure of winning was powerful enough to sucker me into coaxing the resident helper, who was staying with us in Bali to cook the dish for me.

While we were rushing around preparing, she ended up accidentally cutting my finger with a steak knife. I couldn’t get it to stop bleeding. It was obviously edited out of the final episode, but having my hand taped in a makeshift tissue bandage will remain one of our crazier moments in OWS.

It was all worth it, only to see Jonathan’s dismal expression and shock at my well-grated chili paste while he was on the ride back from the market. Rengga winning the challenge, ultimately, wasn’t quite the ending I had in mind for my tale of vengeance, but talk about cooking up a story!

Nonetheless, these comedic moments bring a smile to my face whenever I reflect back on the relationships we have built.

After all, OWS is in the “people business,” and apart from recruiting, I am blessed to have made a ton of friendships with people all over Asia since we started. I’m definitely looking forward to when we can visit Rengga again in Bali.