In a night filled with so many incredible performances, “The Panda” Xiong Jing Nan‘s heroism may be most remembered for a long time to come.

The ONE Women’s Strawweight World Champion endured a treacherous spell at the close of the fourth round in her battle with atomweight queen “Unstoppable” Angela Lee at ONE: A NEW ERA on Sunday, 31 March.

She survived the near-submission finish, and then came back to score a TKO in the final stanza.

Speaking to the media in the post-bout press conference at the Ryogoku Kokugikan in Tokyo, Japan, “The Panda” revealed how she managed to battle through Lee’s tight armbar and reverse triangle attempt.

“Because I am Xiong Jing Nan – I can’t lose,” the 31-year-old Beijing native said with a huge smile.

“I didn’t think too much,” she continued. “I just needed to focus on my goal and concentrate on winning this fight. That’s all I thought about.”

Lee is a Brazilian Jiu-Jitsu black belt with a phenomenal array of submissions, and a proven ability in finishing them. In fact, six of her career victories have come by various submission holds.

However, the Singaporean had never been in the cage with Xiong before, and it was the Chinese hero’s never-quit attitude that kept her in the contest, even when others may have tapped.

“I have faced the reverse triangle and armbar before, and the people who know me know that I would never, ever tap,” she explained.

“You would have to choke me out or break my arm. Of course, my coach did not encourage me to do that, but he was very happy I could escape the submission.” 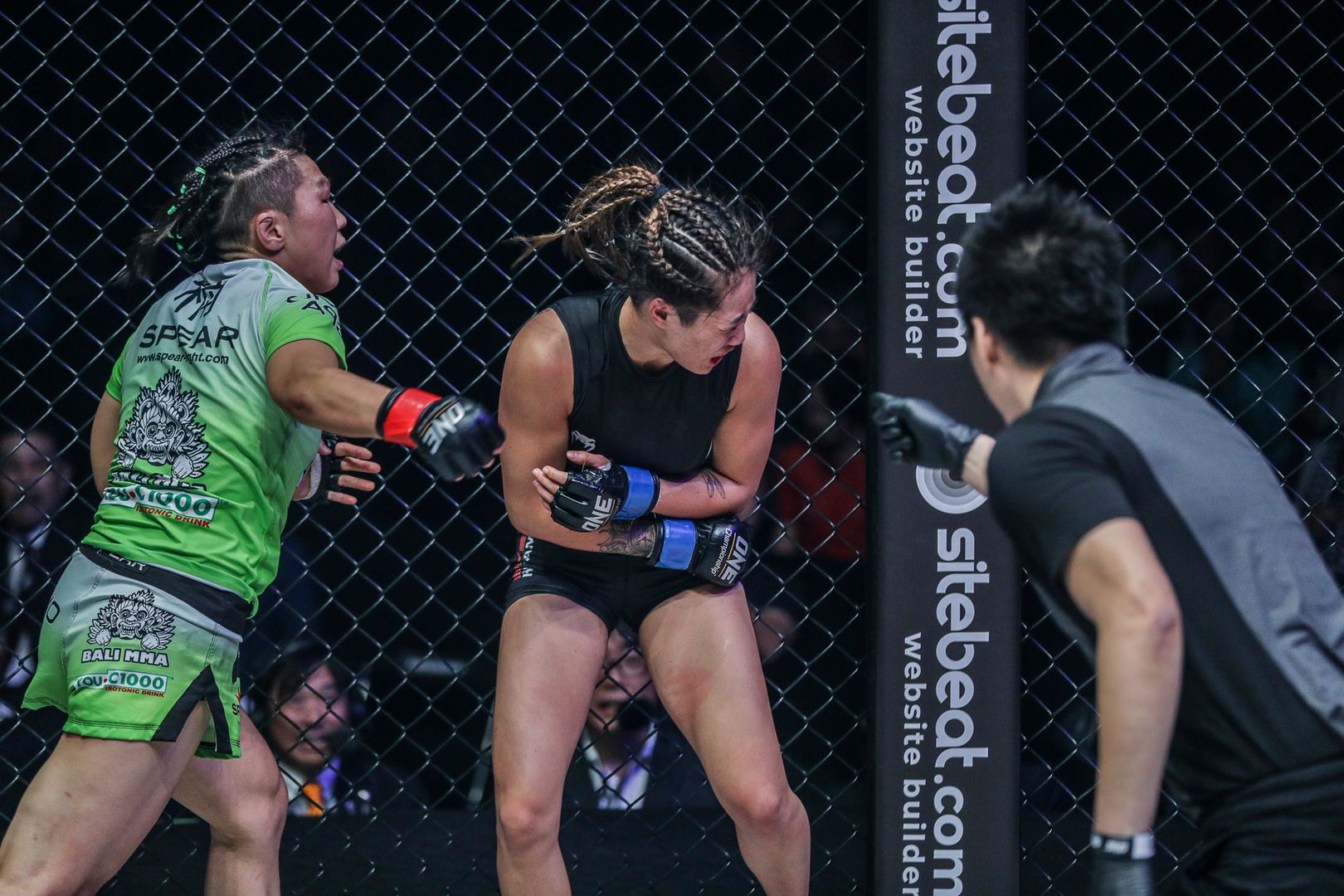 Xiong’s resilience paid off, as she engineered a dramatic turnaround.

She capitalized on her rival’s fatigue in round five, when only a stoppage would guarantee the safety of her ONE Women’s Strawweight World Title.

The Singaporean had expended massive amounts of energy searching for the submission finish in the previous stanza, so Xiong attacked her weakened body with punches and then sealed the deal with a final salvo of strikes.

ONE Championship Chairman and CEO Chatri Sityodtong could not speak highly enough about “The Panda” for her fortitude and warrior spirit.

“Today, she proved she’s a true World Champion. How many World Champions can come back from that kind of adversity and knock Angela out? I think she’s the number one or number two [strawweight] in the world,” he stated.

“I think she’s up there in terms of the best in the world. I think her 17-1 record speaks for itself – she’s an absolute beast.” 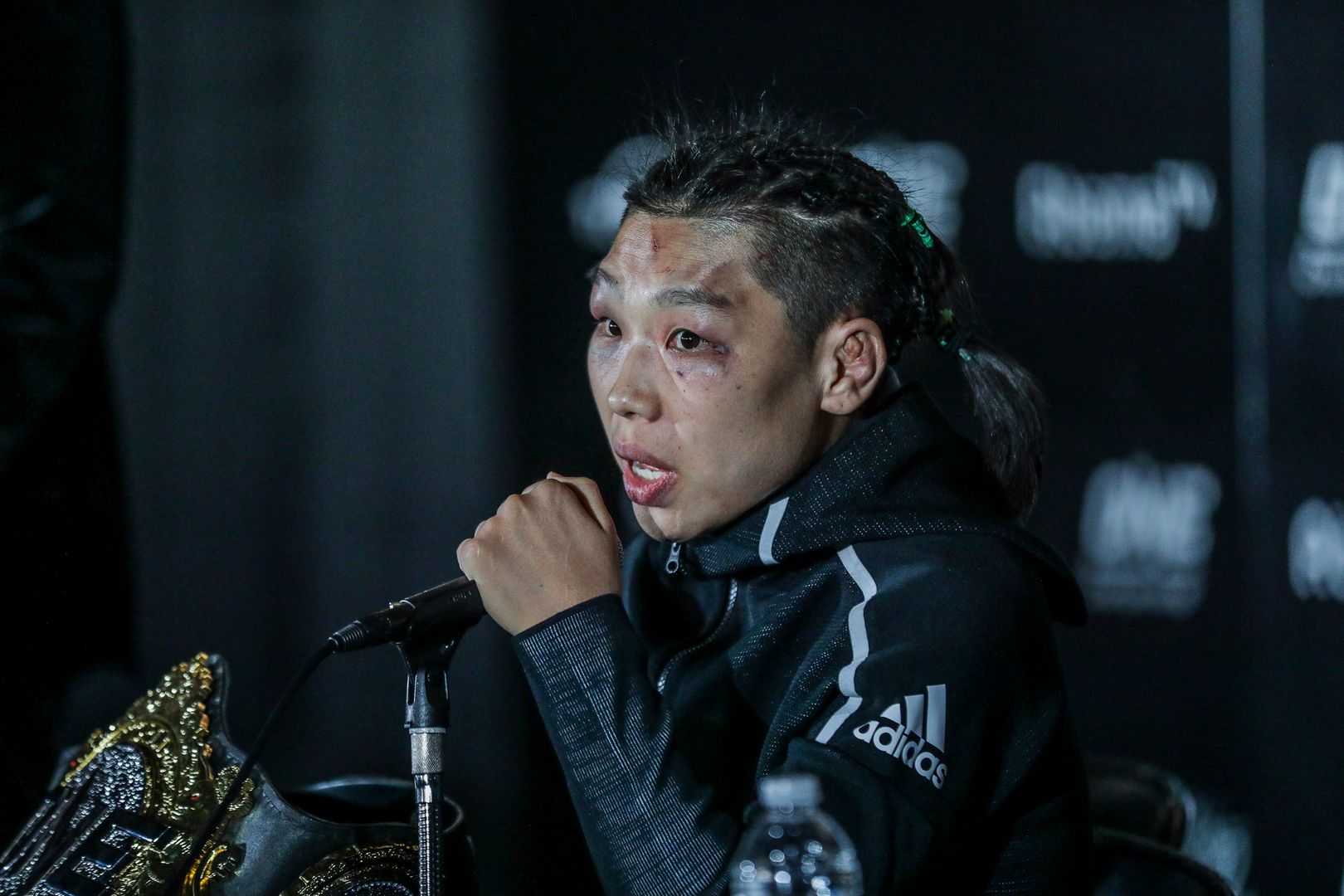 Sityodtong also hinted at a future rematch between the two leaders of the ONE women’s divisions – except this time, it would happen in another weight class and “The Panda” would have the chance to make some more history.

“If I’m not mistaken, I think Jing Nan wants to go down and face Angela for her Atomweight World Title,” he revealed.

“Jing Nan and Angela Lee are among the best females in the world, and I think there’s going to be a rivalry in the future, for sure.

“Jing Nan is so dominant as a World Champion, and Angela was so dominant until today. It was a crazy war. I think a lot of fans enjoyed it, so you never know. If Jing Nan wants to fight at atomweight, let’s do it.”

Nothing has been set in stone, but it appears the two superstars will share the cage again at some point in the future. If it delivers half as much drama as their epic battle in Tokyo, then it will be a smash hit.