A riveting classic went down in ONE Championship’s first main event of 2018, as China’s “The Panda” Xiong Jing Nan met Singaporean standout Tiffany “No Chill” Teo.

The two woman warriors traded their best offense in the main event of ONE: KINGS OF COURAGE, which took place last Saturday, 20 January at the Jakarta Convention Center in Indonesia.

Despite an incredibly tough show of heart by the tenacious Teo, it was Xiong who came away with the victory, becoming the promotion’s inaugural ONE Women’s Strawweight World Champion with a rousing TKO.

Before a capacity crowd in Indonesia’s capital city, “The Panda” put forth a remarkable showcase of her sensational boxing skills, overwhelming Teo with a variety of punches for the duration of the scheduled five-round strawweight contest.

In the first stanza, it quickly became evident that Xiong owned the speed and power advantage, as she started off with her familiar intensity. Teo was tasked with finding a way to take matters to the ground for her to stand the best chance against “The Panda.” It would, however, prove to be in vain for “No Chill.”

Xiong, a 2017 China Open BJJ Champion, depicted veteran composure on the mat, stifling her opponent by remaining active in guard, even threatening with an arm-triangle choke early. The 30-year-old Xiong was also able to consistently get back up to her feet every time her back hit the canvas. The first round ended evenly, as neither competitor appeared to pull away.

During the second round, however, Xiong turned up the pressure, and landed a powerful left hook on Teo, which affected the Singapore boxing champion. With Teo fading, Xiong sensed the finish drawing near.

The Chinese warrior immediately jumped at her opponent, staggering Teo with a heavy torrent of wild left hooks and overhand rights. “No Chill” appeared to tire from the onslaught, and was barely hanging on at the end of the stanza, but showed tremendous grit to stay in the contest.

As the action continued in the third, Xiong piled on the punishment as the Singaporean was trying no more than to merely survive. The Chinese star’s overhand right continuously found a home on Teo, and it was amazing to see Teo remain on her feet for as long as she did.

While Teo survived the third round, she had very little left to begin the fourth. Just a little over two minutes into the frame, Xiong connected on a blistering combination at the center of the ONE cage. She sent Teo crashing onto the canvas with a solid left hook, which caused veteran official Olivier Coste to call a stop to the contest, and award the bout to “The Panda.”

The end came officially at 2:17 of the fourth round. Xiong was crowned the inaugural ONE Women’s Strawweight World Champion, and made history by becoming China’s first world champion in the cage. 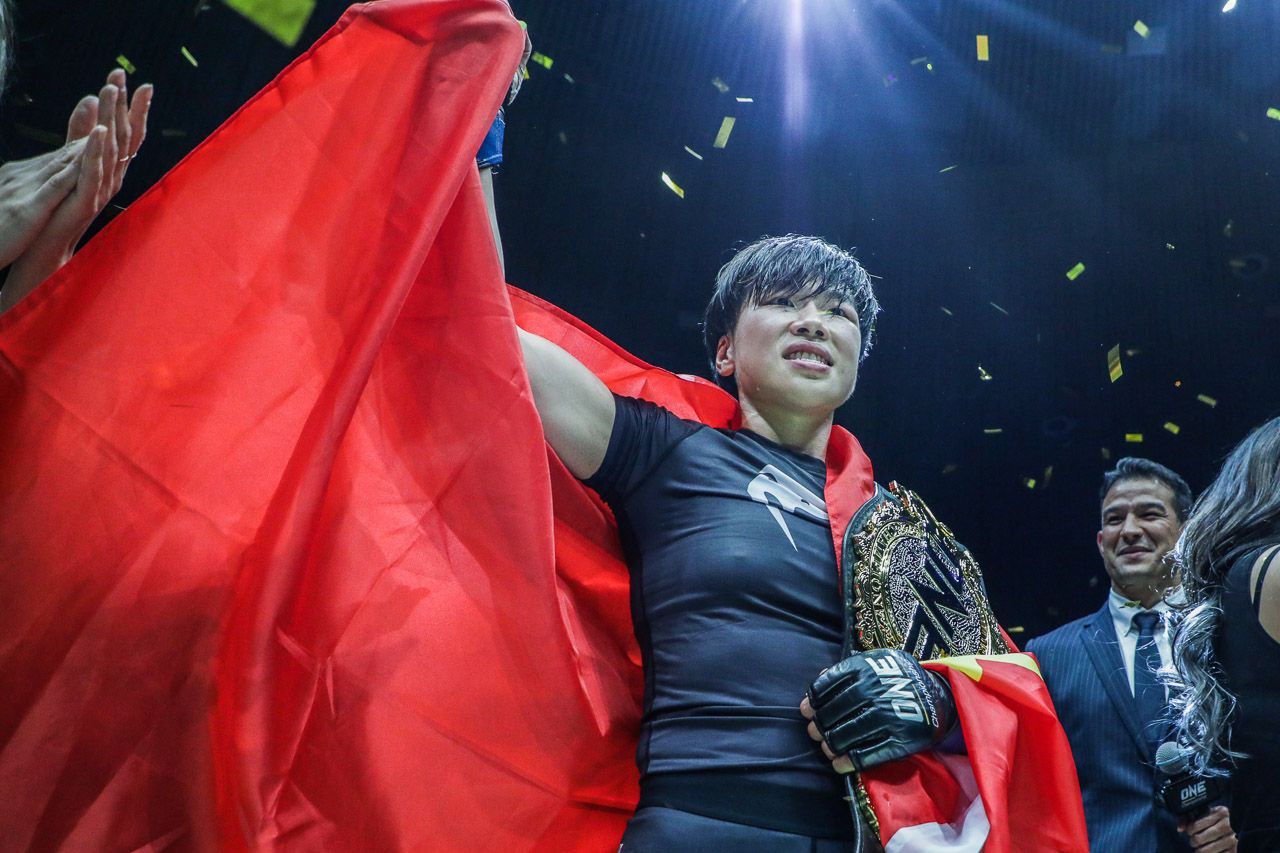 “I want to thank ONE Championship for this chance to show what China, and what women can do. I am happy to represent China and take a lot of pride in that,” said an emotional Xiong, who dedicated the championship win to her grandparents.

“This win is dedicated to my grandmother and grandfather who passed away recently. I feel great and I am overwhelmed. This is a message to all the women across the world – you can achieve anything.”

The victory improves Xiong’s record to 14-1. Meanwhile, Teo experiences the first defeat of her career. The Singaporean’s record drops to 7-1, but will undoubtedly bounce back from the loss very soon, having shown the heart of a champion herself.