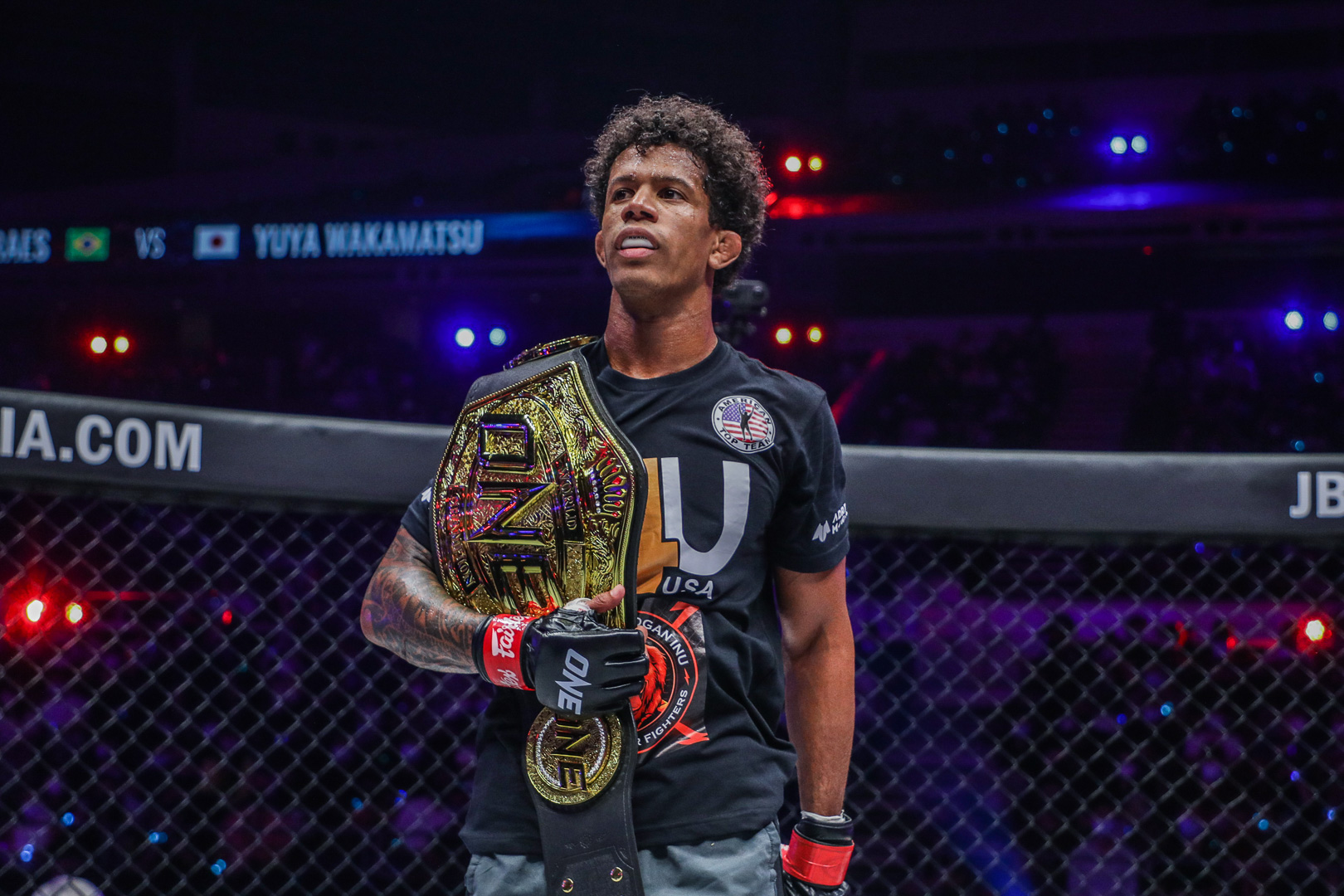 ONE Flyweight World Champion Adriano Moraes really hit it off with the Ruotolo brothers when they met up in California last month for the ONE on Prime Video press conference.

Along with sharing their love for skateboarding, the trio of BJJ black belts jumped on the mats for a joint session at RVCA HQ.

It was especially insightful for Moraes, who is preparing to defend his flyweight belt against MMA great Demetrious Johnson for the second time in the main event of ONE on Prime Video 1 on Friday, August 26.

The divisional king enjoyed his opportunity to pick the brains of teen phenoms Kade Ruotolo and Tye Ruotolo – two of the hottest names in submission grappling – ahead of his matchup with “Mighty Mouse” in North American primetime.

“I trained with them, yes. I arrived at RVCA to train, and they were already there. I got on the mat and asked them a lot of questions because they have more modern jiu-jitsu positions. They’re following this evolution.

“They were very humble and nice to me. They received me very well. And soon after, we trained. I trained with everybody, I trained with them, with [ONE Atomweight World Champion] Angela Lee, too. It was very cool.”

Despite also coming from a BJJ background, Moraes has focused on developing his all-around MMA game over the last decade, which makes it harder to follow every new movement in the grappling world.

However, the Brazilian is eager to find any advantage possible in his upcoming World Title defense at the Singapore Indoor Stadium, especially because Johnson has concentrated more on BJJ during his own training camp.

With that in mind, Moraes gladly tapped into the Ruotolos’ vast repertoire of techniques – and he was astounded by the depth of their knowledge.

“Jiu-jitsu evolves every week and being able to train with these young promising [talents] – young champions with a completely modern and evolved jiu-jitsu – is a really cool experience.

“And they are superstars. They are very talented and have very technical jiu-jitsu.”

Adriano Moraes always strives to improve his mixed martial arts game, and that passion has kept him atop the flyweight division for years.

The 33-year-old is now an eight-time ONE World Champion and the only man to finish flyweight GOAT Demetrious Johnson. So, would a second victory over “Mighty Mouse” elevate Moraes into a similar status?

The 33-year-old Brazilian is too humble to place himself among the MMA legends from his country, but he also knows another impressive performance on August 26 would speak for itself.

“I believe I still have a little more to prove, that I have to beat a few more records to put myself in this scenario and compare myself with other legends. I think I still have a lot to work on to get to that level.”