Stamp Fairtex has the chance to put a troubled year behind her and start afresh at ONE: UNBREAKABLE III.

The former ONE Atomweight Kickboxing and Muay Thai World Champion will kick off her 2021 campaign with a mixed martial arts clash against Alyona Rassohyna at the previously recorded event, which airs from the Singapore Indoor Stadium this Friday, 5 February.

For Stamp, it’s a chance to rectify some of the mistakes she made in 2020 and show that — when she is focused — she’s still among the greatest martial artists on the global stage.

“Last year was a hard time for me. I lost my kickboxing and Muay Thai championship belts, and I was heartbroken,” she reveals.

“These things encouraged me to make this year better. I should focus more on what I need to do and keep up my morale.

“I feel regretful for what I have lost, but it happened because I lost my focus on training. I lost my focus and my self-discipline. It can be summarized in one sentence: I was a bad girl.”

From the outside, Stamp’s predicament is easy to understand. Almost instantly, the young Thai athlete went from relative obscurity to fame and success in the world’s largest martial arts organization.

In her promotional debut in October 2018, she won the ONE Atomweight Kickboxing World Championship by defeating “Killer Bee” Chuang Kai Ting. Just four months later, the Fairtex athlete became a two-sport ONE World Champion with a victory over Janet “JT” Todd to claim the division’s inaugural Muay Thai belt.

It was an incredible rise – and a lot to take in for the quiet girl from Rayong province.

“My life and fate changed in a better way when I joined ONE Championship,” Stamp says.

“It happened overnight. From an unknown, I became famous — being in the spotlight from the media, then other people getting to know me.

“I was under pressure and nervous about how to answer questions. How about my facial expression? I had never experienced this before.”

Along with her newfound status as the leading female striker in ONE Super Series, Stamp also went full throttle into her mixed martial arts career, which began with a spectacular knockout in Rich Franklin’s ONE Warrior Series.

But with a new relationship, three different competitive fronts, and her sudden fame, the Thai struggled to keep all of the plates spinning, and some crashed to the ground.

Last year, the Pattaya resident lost the ONE Atomweight Kickboxing World Title in a rematch with Todd and then dropped her Muay Thai gold to Brazilian striker Allycia Hellen Rodrigues. However, she did add two more wins to her mixed martial arts slate, improving her overall record to 5-0 in that sport.

That is where she’ll pick up now that the calendar has turned. Although Stamp does have some reservations, her renewed motivation is enough to make her look forward to her bout against Rassohyna.

“I am under pressure because I was away from the arena for five months. Although I am afraid of being slow — for kicking, punching, and doing anything — I am thrilled to be in there again,” the 23-year-old striker says. 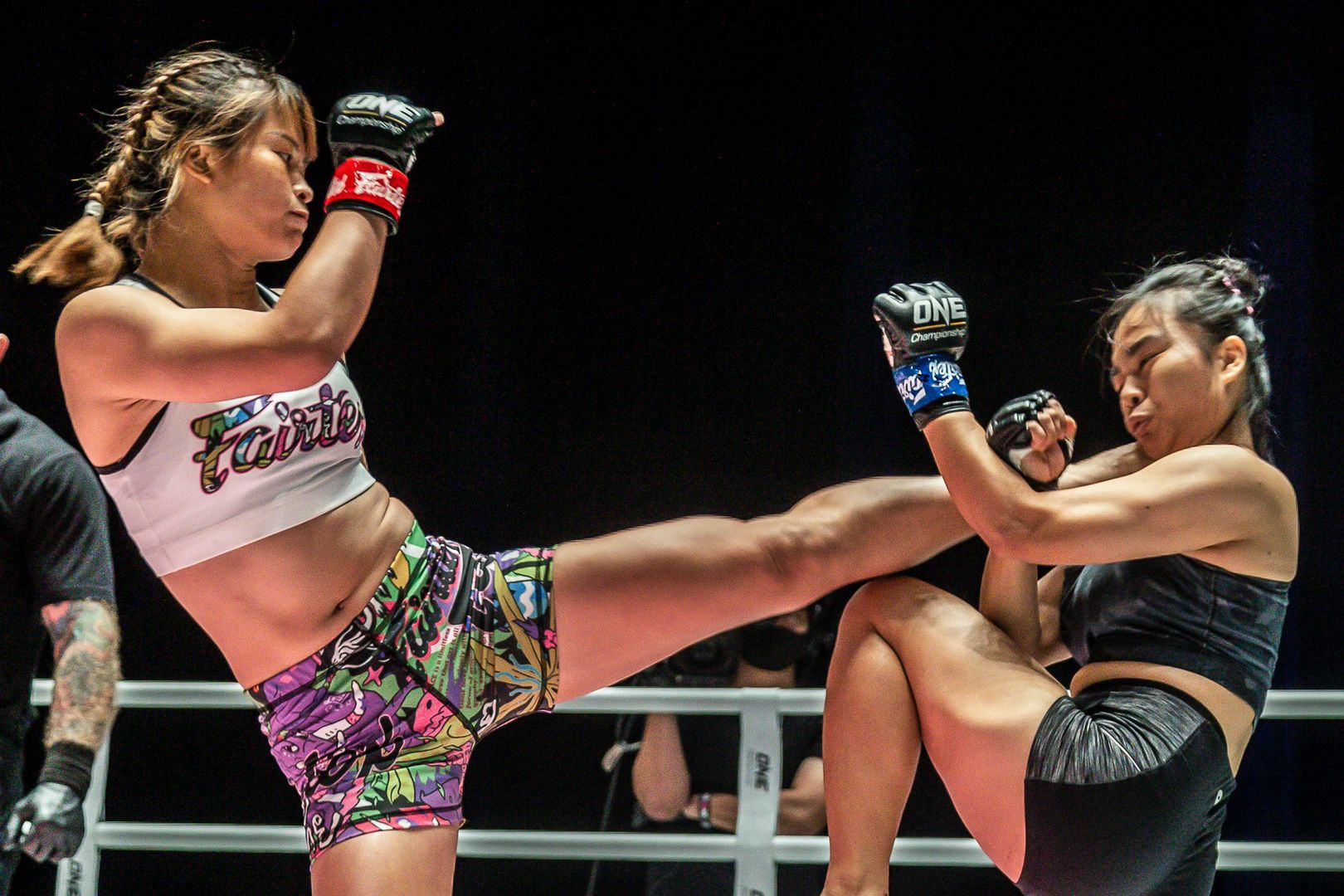 The Ukrainian star could be her toughest test yet. Rassohyna is a grappling specialist who has earned 10 of her 12 victories by submission.

“My opponent is a judo girl and I think she is an experienced fighter as well. Her judo will be her best weapon,” Stamp says.

Despite her enjoyment of every aspect, Stamp’s best route to victory in mixed martial arts will be her world-class striking, which she plans to utilize extensively on Friday.

“I think my elbow [is my strongest weapon], it can make a good impact. And my kicks, punches, low kicks — everything about Muay Thai,” she says. 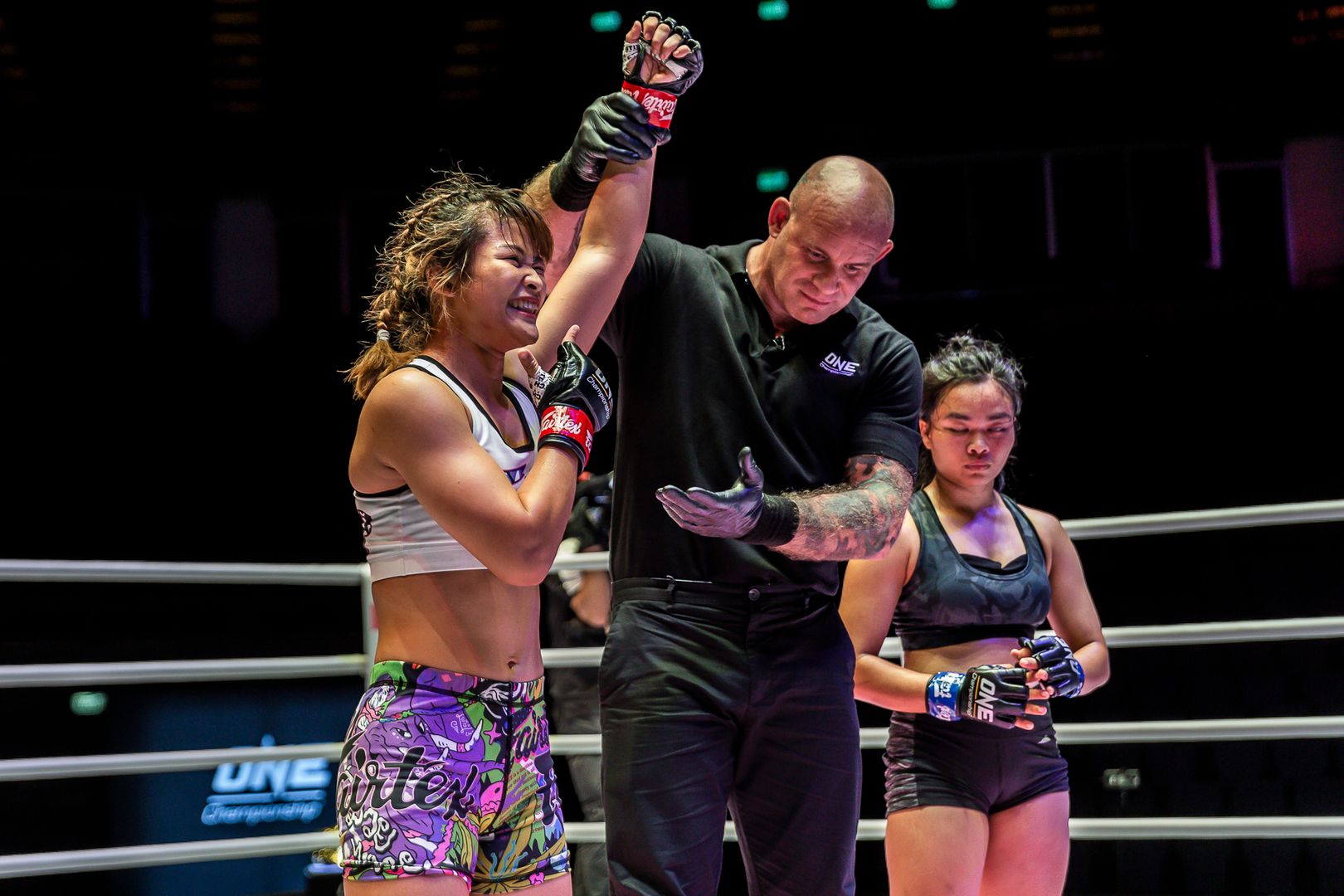 The reason Stamp wants to make her victory resonate so loudly is because she knows that big things could be afoot in the division, including a chance to enter the ONE Atomweight World Grand Prix.

The #5-ranked contender wants to be in on the action as she continues to chase a World Title in a third sport — with her eyes on redemption in the other two.

“There is [going to be] a tournament for the atomweight division that I want to join, and my intent is to grab my third championship belt from there,” Stamp says.

“I want to prove my capability to grab the World Championship belt in this contest and to take back the two belts which I have lost. I want to prove to myself how far I can go this year. I promise I will come back and I will only focus on fighting!”