There could not have been a better way to open up ONE: KINGS OF COURAGE.

A pair of local favorites excited the crowd at the Jakarta Convention Center in Indonesia on Saturday, 20 January, with highlight reel moments and stoppage victories, which perfectly set up a historic night.

Riski Umar kicks off a historic night for ONE with a thrilling win over Egi Rozten via TKO in the 1st round!

Riski Umar kicks off a historic night for ONE with a thrilling win over Egi Rozten via TKO in the 1st round!TV: Check local listings for global broadcast | PPV: Official Livestream at oneppv.com

Riski “King Kong” Umar may be a relative newcomer to the cage, but he displayed the poise of a grizzled cage veteran on Saturday, 20 January.

The 25-year-old Bali MMA product opened up the preliminary card of ONE: KINGS OF COURAGE in spectacular fashion, as he was able to TKO promotional newcomer Egi Rotzen in a back-and-forth flyweight encounter at the Jakarta Convention Center.

Rozten, a regional boxing champion, came out with guns blazing from the opening bell. He immediately engaged with Umar and unleashed a nonstop melee of wild punches at his adversary. But “King Kong” responded to the stand-up battle by throwing straight punches and high kicks, one of which temporarily halted the action due to a low blow.

When action resumed, Umar continued to showcase the diversity of his striking, which ultimately proved to be the difference maker. As Rotzen went headhunting, the Bai MMA product constantly battered him with varied punches, kicks, and clinch knees. 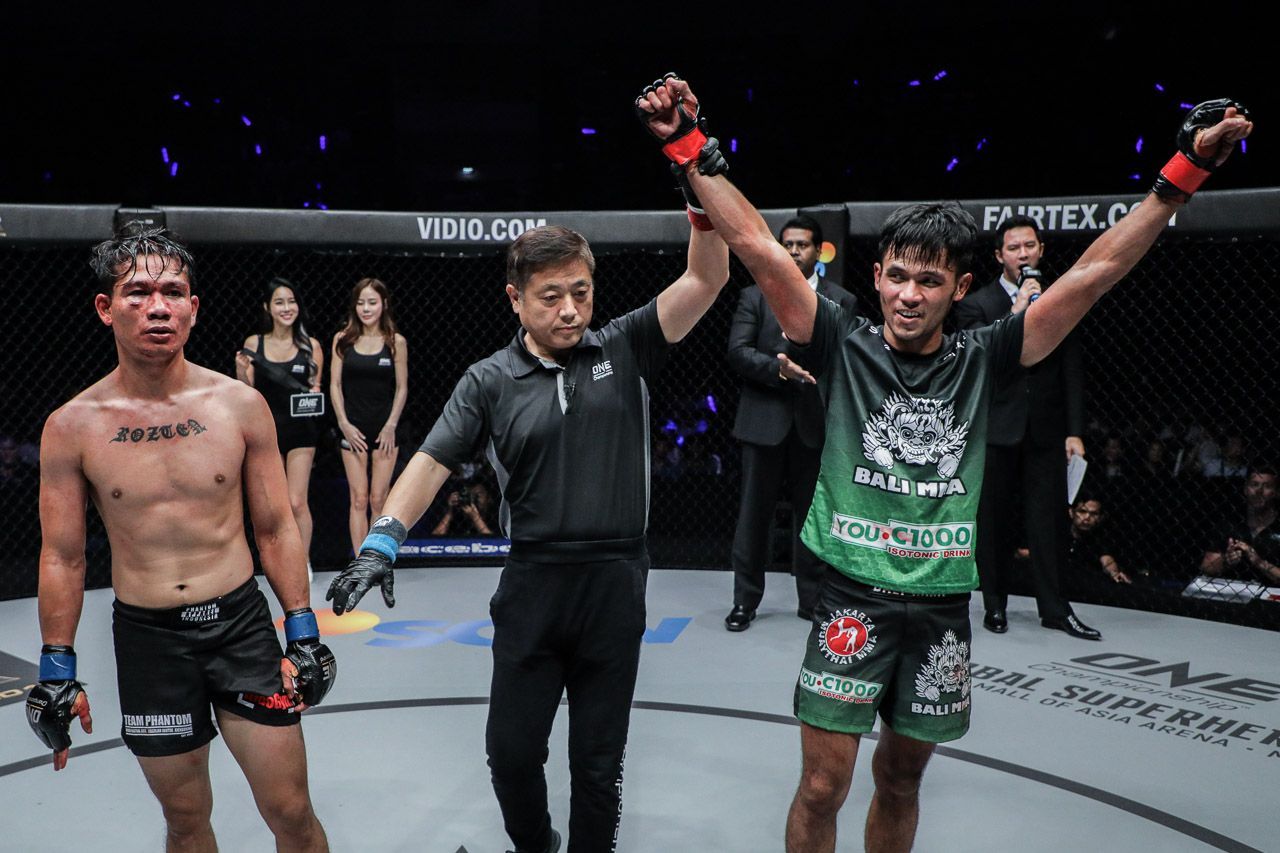 In particular, it was a clinch knee to the midsection that ultimately dropped Rotzen. “King Kong” then jumped into the full mount and delivered a short spurt of unanswered punches, which forced the referee stoppage at the 4:20 mark of the opening round.

Umar has impressed in the short amount of time he has been with ONE Championship. The Bali MMA standout improves his record to 2-0, building upon his immaculate debut performance from last September.

As for Rotzen, he experiences the first blemish of his career and sees his record fall to 3-1. But the 29-year-old from IndoGym competed admirably, as he accepted the bout on incredibly short notice.

At ONE: KINGS OF COURAGE, Priscilla “Thathie” Lumban Gaol excited her countrymen with a first-round TKO of Malaysia’s Audreylaura “Ice Comet” Boniface.

Gaol used a series of push kicks and takedown defense to slow Boniface’s offense to a crawl in the bout’s opening moments. “Thathie” would also use her power to wear down her Malaysian nemesis against the cage.

Unable to get off any significant strikes or a takedown, the frustrated “Ice Comet” eventually fell victim to three consecutive head kicks, each landing with pinpoint accuracy from the Indonesia national wushu champion. Gaol then pounced with unrelenting strikes, forcing the referee to halt the contest at the 3:23 mark of the first round, awarding the victory to the local favorite.

The Indonesian has secured her first win in ONE Championship, and a highlight-reel moment at that. Now, she hopes to build momentum and begin her ascension up the atomweight division’s ranks.