Rayane Bastos gave a career-best performance when it mattered the most at ONE: MARK OF GREATNESS.

The Brazilian opened her ONE Championship account in style with a first-round submission victory over Sovannahry “The Sweet Savage” Em in Kuala Lumpur, Malaysia on Friday, 6 December.

She had battled for three rounds in all of her previous mixed martial arts contests, but everything fell into place for her promotional debut inside the Axiata Arena.

“I don’t know how to describe [the feeling of victory]. I feel like all my hard work during training paid off,” the five-time Brazilian Jiu-Jitsu State Champion explains.

“It was the first time that I have finished a fight in the first round, so it was unique, memorable, and something special. I’m happy with the win, and I cannot wait to fight in ONE Championship again.”

⏰ ROUND 1 FINISH ⏰Brazilian ???????? newcomer Rayane Bastos submits Sovannahry Em via guillotine choke to kick off ONE: MARK OF GREATNESS!????: How to watch ???? http://bit.ly/ONEMOGHowToWatch????: Book your hotel ???? bit.ly/ONEhotelplanner????: Watch on the ONE Super App ???? bit.ly/ONESuperApp????: Shop official merchandise ???? bit.ly/ONECShop

Bastos was elated to get the tap at the 2:40 mark of the opening frame, but she was also slightly relieved.

It was the first time the Para, Brazil native had competed outside of her home nation, and the step up to the world’s largest martial arts organization was a big one.

While her loved ones back home in the South American nation supported her, they knew it was a tough task. The 20-year-old, however, excelled under the pressure to claim the win.

“When I left Brazil, my family and friends already told me I was going to be the underdog, so I came extra prepared,” she reveals.

“I’ve never fought in a set-up like this – everywhere I’ve fought before was very small. Everybody feels nervous, but once I’m in the ring, that’s where I feel at home. Every martial artist truly shines at what they do best in the ring.

“I think I was the better athlete from start to finish, and to be able to put in such a good performance, I think I did a good job.”

Although the bout went much quicker than Bastos and her coach had anticipated, she followed the game plan to a tee.

Em charged at her early with strikes, but the Cambodian-American knockout artist’s aggression worked against her.

Bastos latched on to a guillotine choke when “The Sweet Savage” moved in for a takedown, and she used her heightened expertise to make the right adjustments to force the tap.

“My coach told me, ‘You can drain her energy, block yourself from hits, and just concentrate, and show the fans your true game,’” the Brazilian explains.

“I did not want to rush like her, so I patiently waited for an opening. When her neck fell into place, there was only one thing I knew I was going to do.

“I knew that was my time. It was now or never. I got hold of the neck, and I knew I had the finish as soon as I locked it in.” 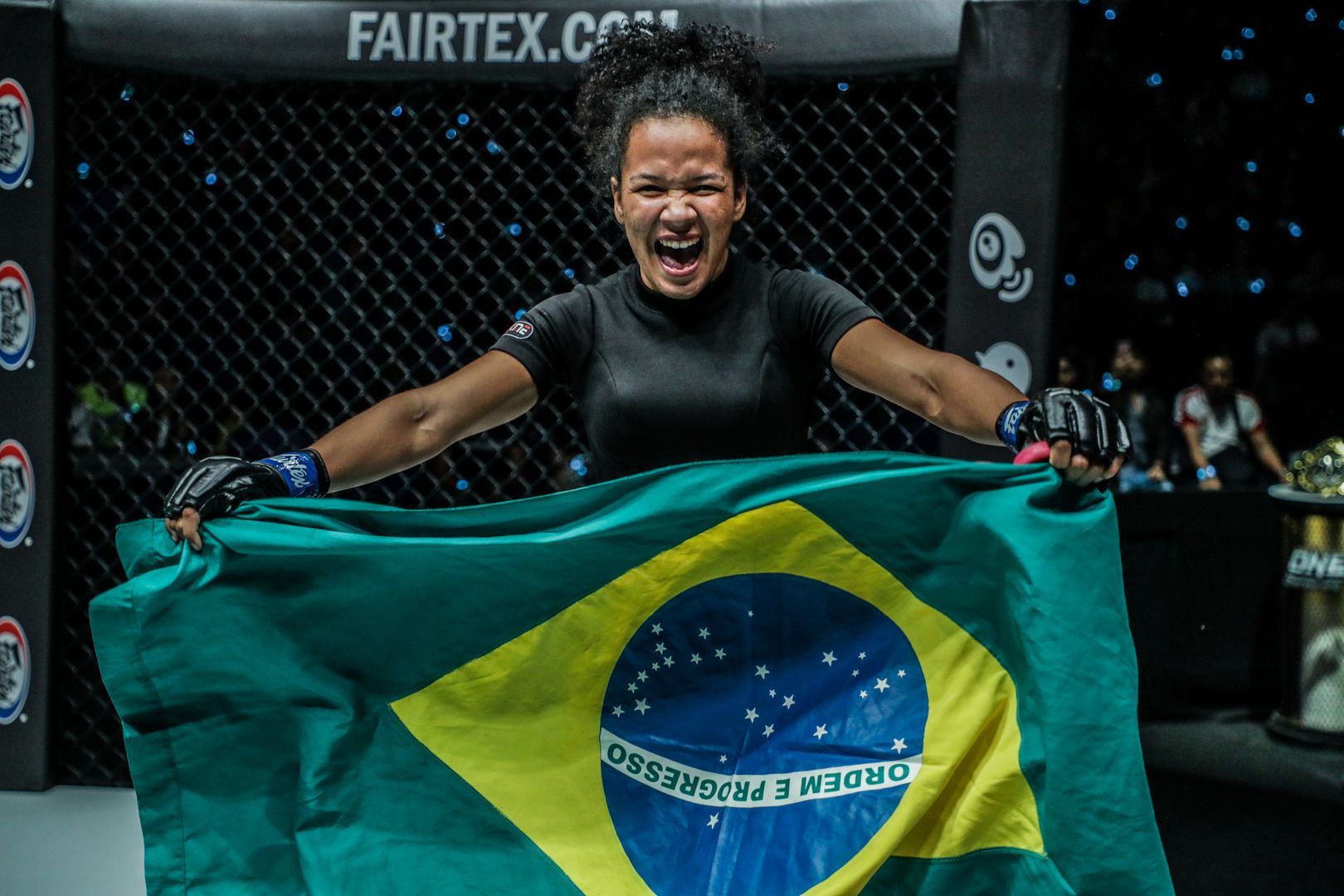 Now that she has started life in The Home Of Martial Arts with a flawless victory, Bastos is looking forward to making her sophomore appearance and establishing herself as a contender in the women’s flyweight division.

The Brazilian will move into the new year with momentum and confidence, buoyed by her promotional debut success.

“[The staff and fans] made me feel like I was an important athlete. Thank you, ONE Championship, for this chance,” she adds.

“For now, I’m going to enjoy the rest of the year without skipping my training, of course. I feel good, and I want to compete as early as possible in 2020. I can’t wait to return to the Circle and fight again.”

Read more: 5 Lessons Learned From ONE: MARK OF GREATNESS