Ramon “The Bicolano” Gonzales has been itching for a fight.

For the past two years, the two-time Philippine National Kyokushin karate champion has been teaching a new generation of students at various establishments throughout Manila, all while patiently waiting for an opportunity to step back into the cage.

On Saturday Night, 11 March, that opportunity will present itself. The 29-year-old Filipino will face off against former WBA Super Featherweight World Champion Yodsanan “Little Tyson” Sityodong at ONE: WARRIOR KINGDOM, live from the Impact Arena in his opponent’s old stomping grounds of Bangkok, Thailand.

“When I knew that my opponent is a boxing champion and a Muay Thai fighter, I just told myself that a fight is a fight and anything can happen. I do not know anything else about him because I do not have time for him,” the karate black belt says with a smile. “All I can say is I will do my best and use what we are doing in my training camp, and I am very lucky that ONE Championship gave me another opportunity.”

Born in Matacon, in the Albay province of the Phillipines’ Bicol Region, Gonzales was raised primarily by his grandmother in Manila. Despite his parents separating when he was a child, he grew up to be a normal Filipino kid. He went to school and hung out with his friends.

Teenage Ramon may have been an ordinary student, but it was in school in 2001 when his life would change in an extraordinary way. It was not because he received stellar grades in math or literature, but because he met his martial arts teacher.

“He was a taekwondo instructor inside the school, so I trained with him,” Gonzales recalls. “One day, in 2002, he asked: ‘Do you want to learn Kyokushin karate?’ Then I started to train, I fell in love with the art, and I have fought and trained in Kyokushin karate until now.” 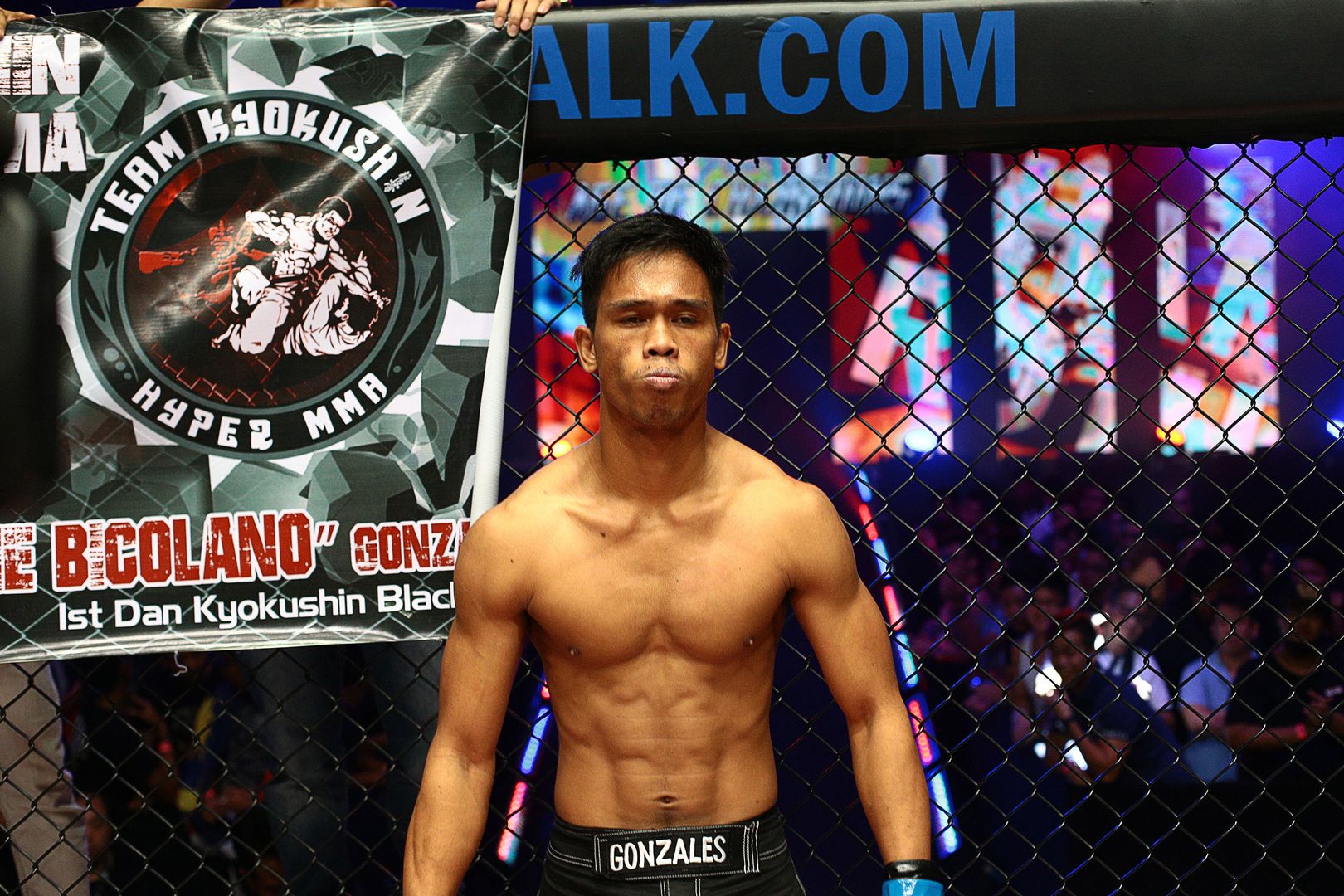 Later, while mastering his craft, he attended the Philippine College of Criminology in hopes of becoming a police officer. However, after his wife became pregnant, he left school and focused strictly on his growing family and budding career as a martial artist.

The move served him well. He became the National Kyokushin karate champion in 2007, and won the prestigious title again two years later. Though he was proud of his dual achievements, he wanted to extend his combat sports career and test his skills in mixed martial arts.

Gonzales made his professional MMA debut in 2009 for a local Filipino promotion, and only needed 43 seconds to knock out Jemerey Quinonero. However, that could have been the end of his MMA career.

“After the fight in URCC, my sensei told me that this is my first and last fight in MMA, because I had so many fights internationally to represent Kyokushin. So, my sensei wanted me to focus on that.”

After nearly five and a half years of participating exclusively in karate competitions, save a single amateur MMA contest in Malaysia, “The Bicolano” was ready for a bigger challenge, and wanted to see how well his skills, and his art, would fare against the world’s best. That desire led to a contract with ONE Championship in 2015.

“I signed with ONE because I wanted to challenge myself, and of course, ONE is the biggest MMA promotion in Asia now,” he stated. “I am excited to be one of the company’s athletes, and represent my country, my team, and everyone who believes in me.” The Filipino bantamweight made his promotional debut at ONE: AGE OF CHAMPIONS in March 2015 against Cambodian Kun Khmer specialist Chan Rothana. Even though it was a thrilling back-and-forth affair, he was submitted via rear-naked choke with just twelve seconds remaining in the opening stanza.

Gonzales has learned from that loss, and has been desperately waiting for an opportunity to redeem himself. Now, that opportunity arrives on Saturday Night, 11 March, in the form of a catchweight bout with Yodsanan Sityodong at ONE: WARRIOR KINGDOM.

Nicknamed “Little Tyson” for his immense punching power, Sityodong is a Muay Thai practitioner turned boxing world champion, who tormented his enemies during his reign from 2002 to 2005.

In MMA, the Singaporean-based Thai, who is a trainer at mega gym Evolve MMA, holds a 2-1 record. He last fought ten months ago at ONE: KINGDOM OF CHAMPIONS, where he displayed that legendary striking flair against Chrech Kosal and fought his way to a flawless first-round TKO victory.

The odds may be against Gonzales. It has been two years since he has fought inside a cage, and he is accepting this bout on two weeks’ notice in enemy territory. Sure, it is a challenge, and that is what drives “The Bicolano”.

“My team, together with my coaches, are trying to help me remove that ring rust and win the fight. All I can say is, I will bring out my best once the cage door closes,” he states. “I really want this. I want to fight and win.”