On Thursday, 11 October, some of Asia’s most talented up-and-coming mixed martial artists displayed their skills at ONE Warrior Series 3 in Singapore.

All the action & excitement from ONE Warrior Series 3 ⤵️

All the action & excitement from ONE Warrior Series 3 ⤵️Download the ONE Super App now ???? http://bit.ly/ONESuperApp

The invite-only event, which streamed live one the ONE Super App, featured a massive 17-bout card with prospects who aimed to make a strong impression in hopes of winning a USD$100,000 contract and a spot on the ONE Championship roster.

These are the highlights from another action-packed live event showcase for the standout athletes from Rich Franklin’s ONE Warrior Series (OWS).

Who bagged a ONE Championship contract worth USD$100,000+ at ONE Warrior Series 3?

Who bagged a ONE Championship contract worth USD$100,000+ at ONE Warrior Series 3?Download the ONE Super App now ???? http://bit.ly/ONESuperApp

Out of the 34 mixed martial artists who competed on this action-packed card, only Mark Fairtex Abelardo from the Philippines walked away with a lucrative ONE contract.

ONE Vice President Rich Franklin said: “Mark Abelardo earned a contract because of the war he had in his last event and his ability to overcome adversity in his second match. Very well-deserved.”

Abelardo defeated Ali Motamed in a show-stealing encounter at the second ONE Warrior Series live event in July, and he defeated Shinechagtga Zoltsetseg via TKO on Thursday night.

“Tyson” survived a striking assault from his opponent in the opening moments of the first round before rallying to take Zoltsetseg to the mat and unload with ground and pound. All that offense meant the Mongolian could not answer the bell for the second round and the match was brought to a halt.

In victory, Abelardo improved his mixed martial arts record to 17-5.

Eto Kimihiro may not yet have a contract with the world’s largest martial arts organization, but he will surely be offered one if he continues his winning run.

The Japanese wrestling veteran, who is one of the most experienced athletes on OWS, carried the momentum from his July victory into his lightweight main-event clash with “Deadshot” JD Fairtex Hardwick (1:04 of the highlights video).

Kimihiro displayed his grappling advantage early on, but the opening stanza was mostly contested on the feet. Although the American applied pressure with his strong Muay Thai skills, the DEEP veteran held his own in the stand-up exchanges.

In the second round, however, the 29-year-old from Tokyo, Japan connected with an overhand right and took Hardwick to the ground. He applied an immense amount of top pressure and locked in an arm-triangle choke to force “Deadshot” to tap out.

With the victory, Kimihiro improved his record to 15-4-2 and took a step closer to joining the main ONE roster.

Lito Adiwang Is A Star In The Making 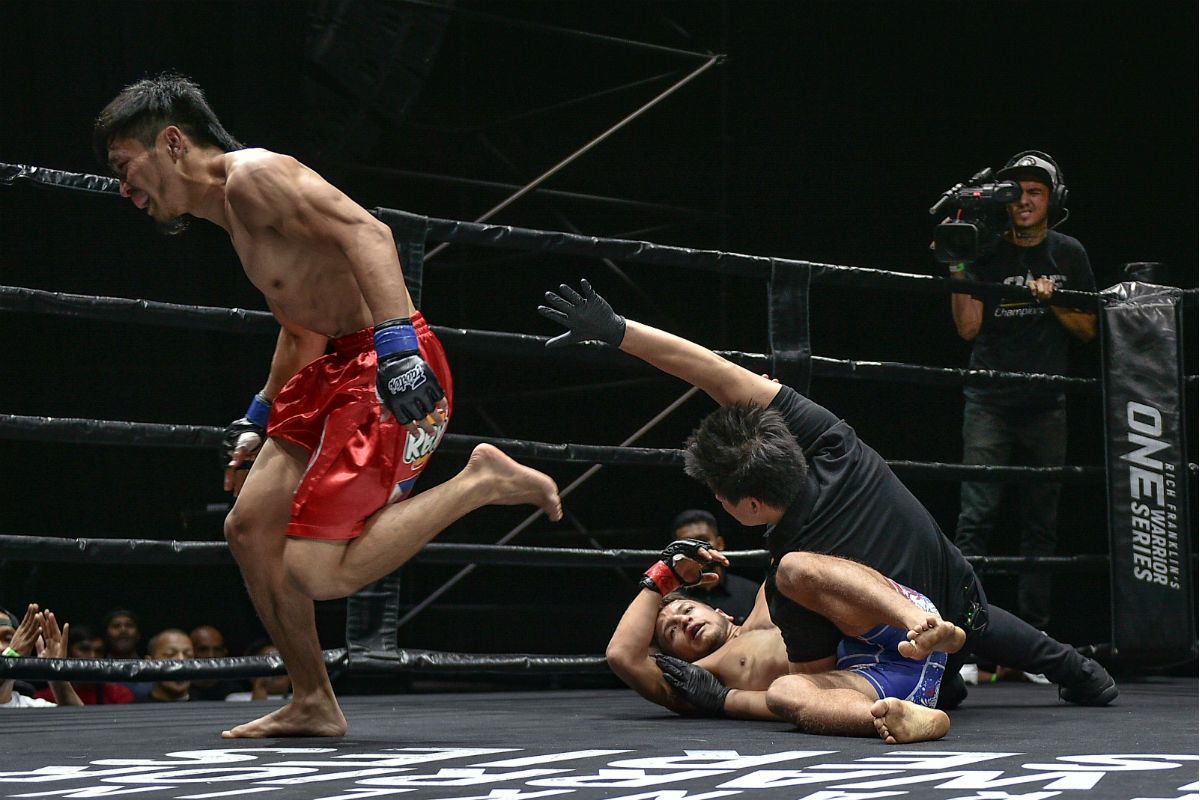 Team Lakay has produced three ONE World Champions this year, and now it has one of the stars of OWS on its books.

The gym in Baguio City, Philippines was well represented at the event by Lito Adiwang, who faced Phuket Top Team’s assistant wrestling coach Manuel “Tick” Huerta (0:28 into the highlights video).

Although he connected with some boxing combinations, the Thailand-based American was unable to get his wrestling going.

The Filipino veteran was calm as he defended on the feet, but turned up the aggression halfway through the first round of his strawweight contest and battered “Tick” with his explosive wushu-based striking. The bout ended when a powerful right uppercut dropped Huerta, and a pair of hammer fists finished the job.

Adiwang, who climbed to 7-2, showed the poise of a mixed martial arts veteran, which should help him flourish in future OWS events. 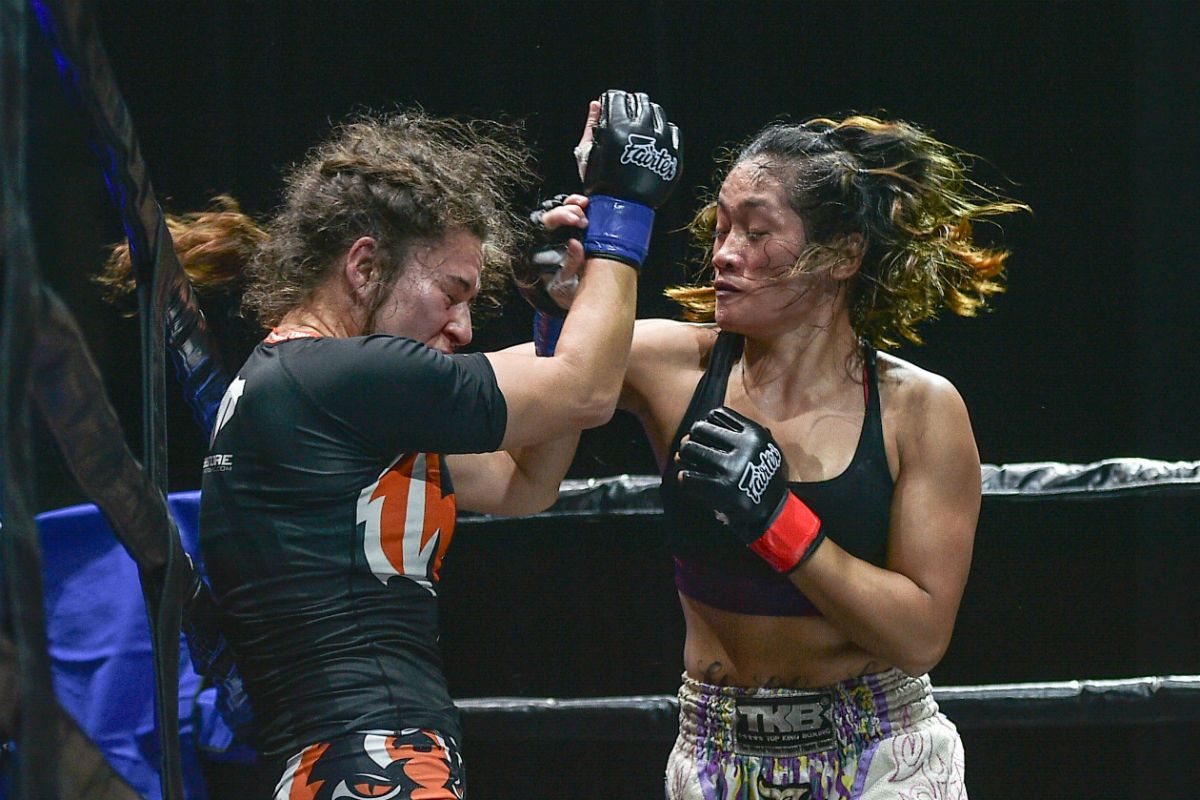 There was no shortage of entertaining bouts on the card, but the Philippines’ Jenelyn Olsim and Spain’s Claudia Diaz may have put on the most exciting contest of the night (1:00 in the highlights video).

For 15 minutes, these two female warriors went toe-to-toe in a match that could have easily been mistaken for a ONE Super Series bout.

Olsim was sharper and packed more power in her strikes in the three-round affair. She blasted the Spaniard with rapid-fire punching combinations, leg kicks, elbows, and knees in the clinch.

Diaz, however, never backed down from engaging with the Filipina and kept it close in the opening two stanzas, but Olsim pulled away in the third round to capture the decision victory and bolster her professional slate to 3-1.