Joshua “The Passion” Pacio believes that he finally deserves to call himself a World Champion after his defeat of Rene “The Challenger” Catalan at ONE: MASTERS OF FATE.

There is an old adage in combat sports that an athlete cannot claim to be a ‘true’ champion until they have defended their belt, and the Team Lakay star achieved that feat on Friday, 8 November.

In a historic, all-Filipino main event at the Mall Of Asia Arena, the 23-year-old from Baguio City retained the ONE Strawweight World Title at the second attempt with a second-round submission.

Pacio was delighted with the result after the disappointment of losing his grip on the gold in the first defense of his first reign, and the six months of hard training he undertook since his redemption against Yosuke “The Ninja” Saruta at ONE: ROOTS OF HONOR.

“All I can say is that all the sacrifices and hard work really paid off for us,” he says.

“I am a World Champion now. I feel it now because I have defended the title. After this win, it’s back to the drawing board, and hopefully, I get to defend my title quickly.”

Pacio was dominant in the second round of his contest with his compatriot as he took control on the ground, and patiently worked his way toward a finishing position.

His success did not come without adversity, though. In the first round, he had to survive what looked like a dangerous leg lock attempt from his rival.

However, “The Passion” reveals that he was never in significant danger from the submission technique, and he did not suffer any lasting damage that will prevent him from making a quick return to action.

“It wasn’t really that tight. There’s no injury, and I hope to get back on January 31,” he adds.

ONE Championship’s first trip of 2020 to the Philippine Capital will fall on that date, and if the strawweight number one does get the chance to carry the flag for his nation and his team then, he will have the opportunity to continue the rebuilding process after some disappointing results.

Last month, two of his training partners suffered tough losses at ONE: CENTURY, but instead of wallowing in despair, they returned to the gym to help their comrade achieve his latest victory.

By earning a big result on the biggest stage, the young World Champion hopes that will help the Baguio City collective end 2019 on a high, and enter the new year with confidence.

“What happened to us in Japan hurts. I still carry it, but my teammates motivated me to get this win for them,” he says.

“I thank kuya Kevin [Belingon, for his help and inspiration]. I haven’t really moved on from that night in Japan, but at the end of the year, we’re happy.”

Read more: What’s Next For ONE: MASTERS OF FATE’s Big Winners? 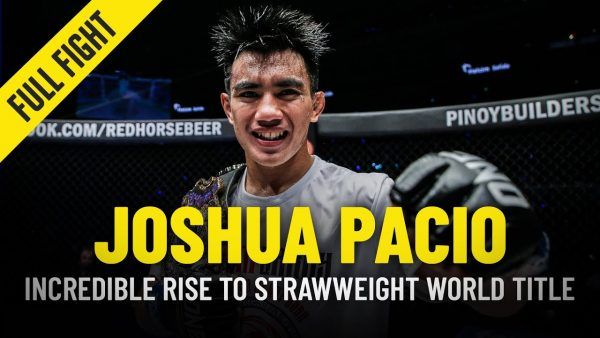