Elite Russian striker Irina Mazepa wants to prove she is the queen of ONE Championship’s women’s strawweight division.

The pride of St. Petersburg, Russia, will attempt to take a step forward in her mission on Friday Night, 21 April, when she meets eight-time BJJ World Champion Michelle Nicolini at ONE: KINGS OF DESTINY. The epic battle takes place at the Mall Of Asia Arena in Manila, Philippines.

Naturally, the 33-year-old Mazepa expects her opponent to take the fight to the mat. If and when that does happen, she has a plan of action in place to make Nicolini pay for that decision.

“I know she will try to put me on ground,” Mazepa says. “I have good control, and a lot of instruments and tools in my skill set that I can work with. I have a lot of power and I can stop her if she does try to do that. I just have to start the fight. I will make the right decisions at that time.” This bout is a classic clash of styles. Mazepa is famous for her striking, as she is a five-time wushu world champion and a former K-1 world champion. Nicolini, on the other hand, may be the best female BJJ practitioner on the planet.

The Russian intends to keep the fight in the realm that best suits her strengths, but in preparation for this contest, she has worked specifically to improve her ground game, in an attempt to nullify her rival’s perceived advantage. A knockout artist through and through, Mazepa still prefers to keep the fight upright.

“I learned some techniques on the ground,” she explains. “There is always more to learn. I like this process and working in both areas, but I prefer striking more.” 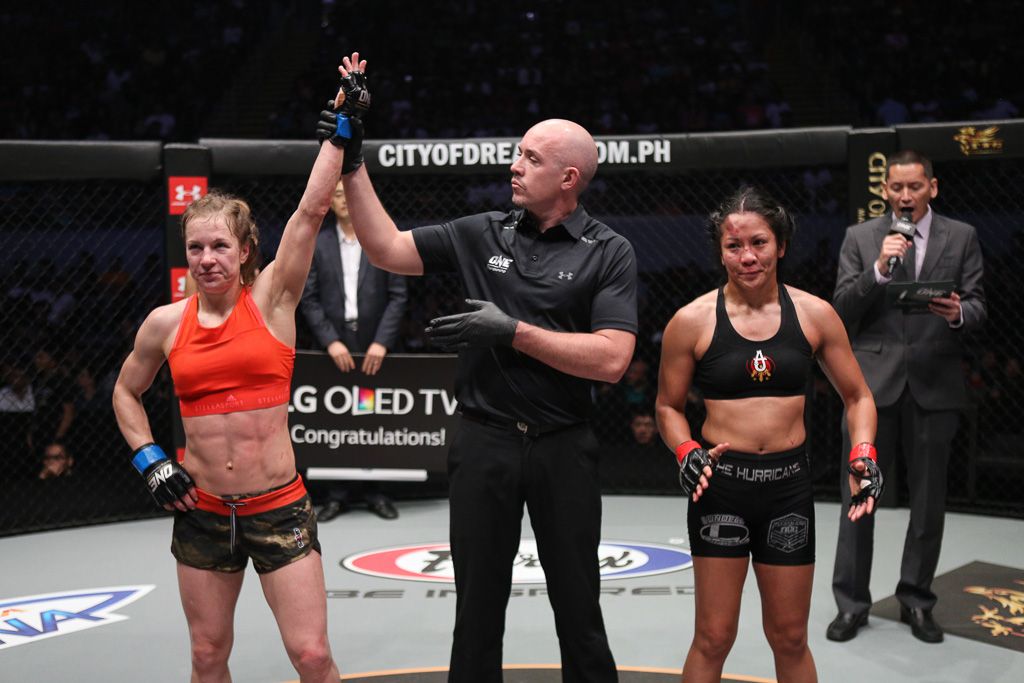 Although Mazepa has an immensely decorated combat sports background, she is still relatively young when it comes to MMA competition. She made a successful MMA and ONE debut in October 2015 against Malaysia’s Ann Osman at ONE: TIGERS OF ASIA, where she knocked out her famed opponent. She followed that victory up two months later with a unanimous decision win over former boxing world champion Ana Julaton at ONE: SPIRIT OF CHAMPIONS.

The St. Petersburg native is supremely confident in her standup game and developing grappling skills, and believes she is the top strawweight in ONE Championship.

“I feel that this whole weight division is mine,” Mazepa says. “I have power and I can work well against all the opposition that these girls present. So for sure, I deserve to be champion in this weight division.”

Nicolini may feel differently. The 35-year-old Brazilian, who trains out of Singapore’s Evolve MMA, is a master grappler who holds a 3-1 record, with all three of her victories coming via submission. She most recently made her promotional debut at ONE: DEFENDING HONOR in November, where she dominated Egyptian wrestler Mona Samir on the ground and tapped her out with a modified rear-naked choke in round one.

The winner of this forthcoming strawweight clash at ONE: KINGS OF DESTINY will undoubtedly move closer to superstardom. Whether Mazepa’s bright future leads to another world title or down a different road, the Russian knockout artist is honored to represent the martial arts, and all that the lifestyle entails. She feels that everyone can benefit from an honorable and dutiful way of life.

“For all fans of martial arts, I can say that they are in the right realm, because people who do that sport usually do it with a big heart and in an honest way. They are great people,” she proclaims. “Follow that good example and use that inspiration. Create in your life with passion like me. I appreciate all of my supporters and I feel that we are one world team.”