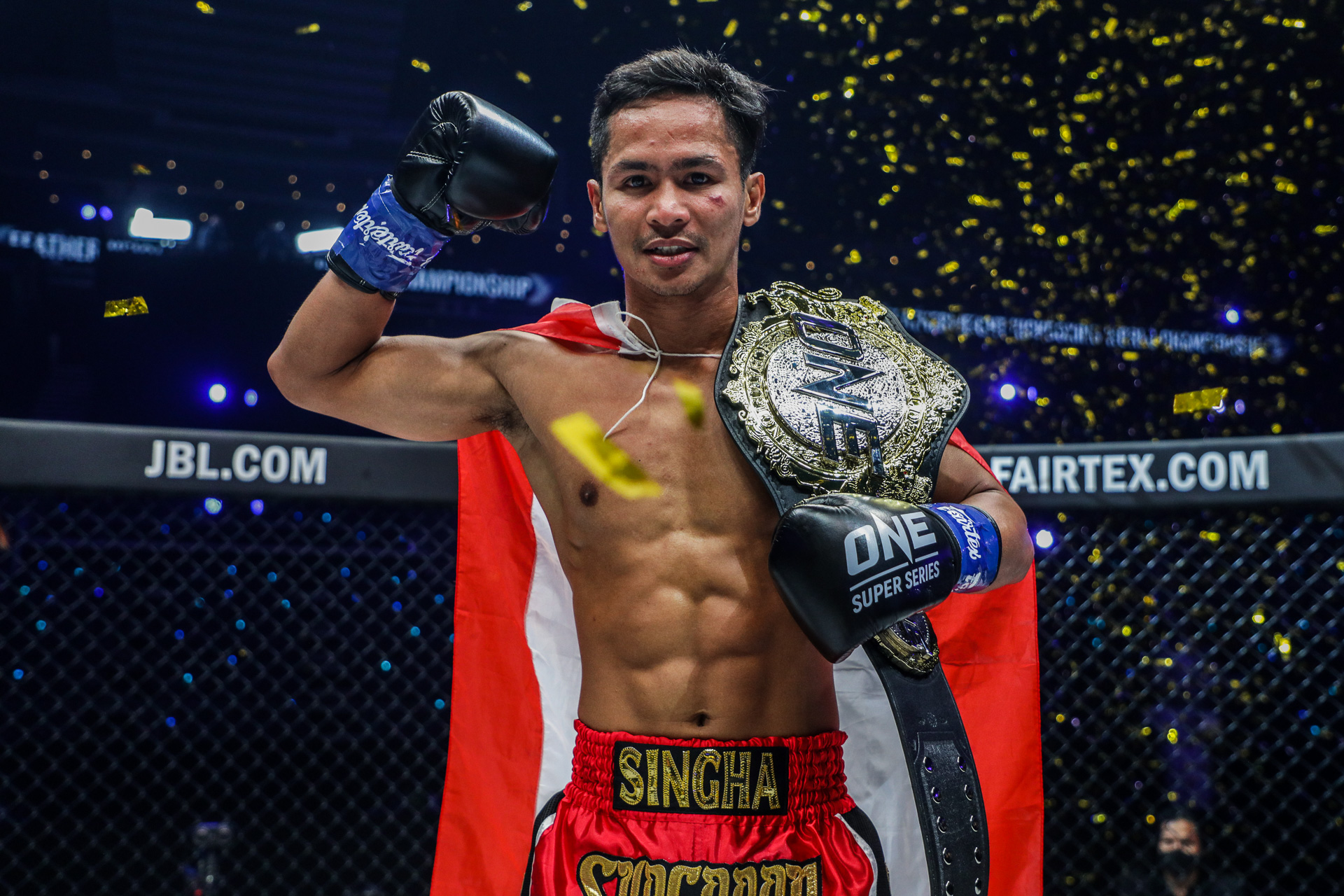 Superbon Singha Mawynn sent shockwaves through the combat sports world when he knocked out legendary striker Giorgio Petrosyan to win the ONE Featherweight Kickboxing World Title in October.

Now, the Thai star will put his newly acquired gold on the line against #1 contender Marat Grigorian as part of the historic ONE X: Grand Finale card on Saturday, 26 March.

Ahead of his return at ONE’s 10-year anniversary show, Superbon reflected on the scale of his last victory – and what his head kick of Petrosyan has done to elevate his status.

“More people recognize my name. More people talk about me. Some ask me to take pictures with them, and I feel like I’m an idol. But still, I live a normal life as before.”

For Superbon, staying grounded is the only option.

Despite clinching the top prize in kickboxing against the sport’s biggest name, he still wants to achieve much more.

The Thai now sits atop of the most stacked division in history, and there are plenty of potential contenders waiting to get their shot at his belt, so he needs to stay focused and prepared.

“In terms of athletes, I have reached the highest level of success, but I still have many goals. I feel like I can’t stop at the point where I am right now, especially in my capacity as an athlete. I have to keep focusing on my routine, like daily training, diet, drinking lots of water, and getting enough rest. I have to take care of my body well because there are still many opponents that I have to overcome.

“Now that I have reached the top, it’s my responsibility to work harder than usual to maintain this position as long as possible. I want to do better and better.”

Superbon Hopes To Even The Score With Marat Grigorian

The Armenian most recently took part in the ONE Featherweight Kickboxing World Grand Prix, but he was forced out of the semifinals due to COVID-19. In a twist of fate, though, that withdrawal allowed the Hemmers Gym man to step in for this World Title showdown.

Superbon knows his challenger well, as he suffered his last loss against Grigorian back in 2018. However, the Singha Mawynn representative also believes that setback helped him become the force he is today.

“That loss pushed me to work harder. It made me realize that I still had a hole in my defense. I learned that I have to concentrate on myself all the time from the first step into the ring, and to always be cautious of your opponents. And I had to strengthen my defense.

“I’ve been waiting for this rematch. He is the only one in the featherweight division who can beat me. If I can beat him this time, I’ll be able to say that I’m an [unbeatable] fighter in this division without doubt.”

Getting knocked out by Grigorian is something Superbon will never forget, but he’s bounced back with a remarkable run of victories.

The Thai has now won 11 straight fights – including the memorable KO of Giorgio Petrosyan – and he feels ready to set things straight.

A matching knockout is the top priority, but Superbon is prepared to use everything in his arsenal to defeat his old rival at ONE X.

“Do I feel like the underdog? No, absolutely not. I see big progress from four years ago when I faced him. Back in that tournament, I had to fight two matches in one night, so I had trained differently for that fight. Now I am able to be more focused, only on him. And I’m sure I’ll beat him this time.

“What I can say is I have trained so well in every weapon I have. I will choose the right weapons depending on the situation. And if I have a chance, I might give him a head kick like I did to Petrosyan. Everyone who fights with me must watch out my high kick. It can come from nowhere.

“If possible, I want to knock him out because winning by knockout is decisive.”