Maira Mazar did not get off to an ideal start in ONE Championship, but the Brazilian quickly turned her luck around last November with a TKO finish of Choi Jeong Yun.

Now, she will renew the Evolve-Team Lakay rivalry and aim to continue her rise up ONE’s Athlete Rankings.

On Friday, 19 March, the #5-ranked strawweight contender will meet the Philippines’ Jenelyn Olsim at ONE: FISTS OF FURY III, which was previously recorded from the Singapore Indoor Stadium. 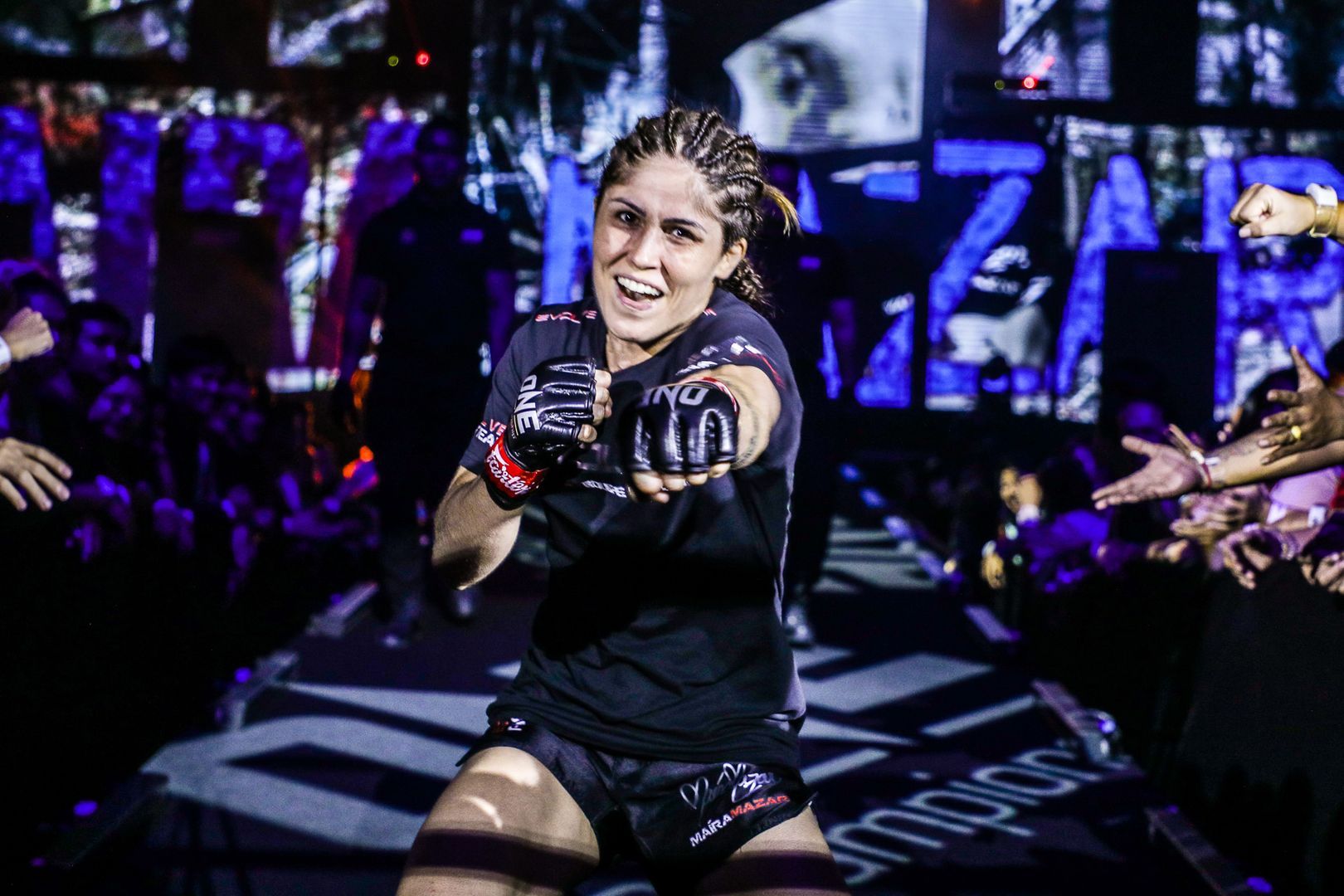 Mazar has never faced a world-class striker like Olsim, a Philippines Muay Thai Champion. However, the Evolve standout sees their matchup as a chance to showcase her ever-improving mixed martial arts skill set.

“[We’ve been] training a lot of kickboxing and boxing, so I prefer to fight a striker because I can show more of my game,” the Singapore-based Brazilian says.

For her part, Olsim loves to tire out adversaries by attacking with a relentless pace. That means Mazar will need to close the distance and shut down the Filipina’s striking opportunities.

“I saw her opponents giving her space to do her game. She was very aggressive,” Mazar offers. “But I don’t want to give her the same chance. I have to be more aggressive with her because she’s good when she has space.”

If the bout does stay on the outside, Mazar believes her 4-centimeter height advantage will give her the edge over the Team Lakay rising star. And of course, the former news reporter is just fine if the action goes to the ground.

“I can use my counter game better than her because she’s a little bit shorter than me. I like to counter, but when a girl is tall, it’s harder to counter,” the Brazilian says.

“If it goes to the floor, that’s okay too. But we’ll have to feel how the fight is going to decide this.

“We are training a lot of ground-and-pound with dummies, and my control on the ground is better now – so I think this is my strong point for this fight.” 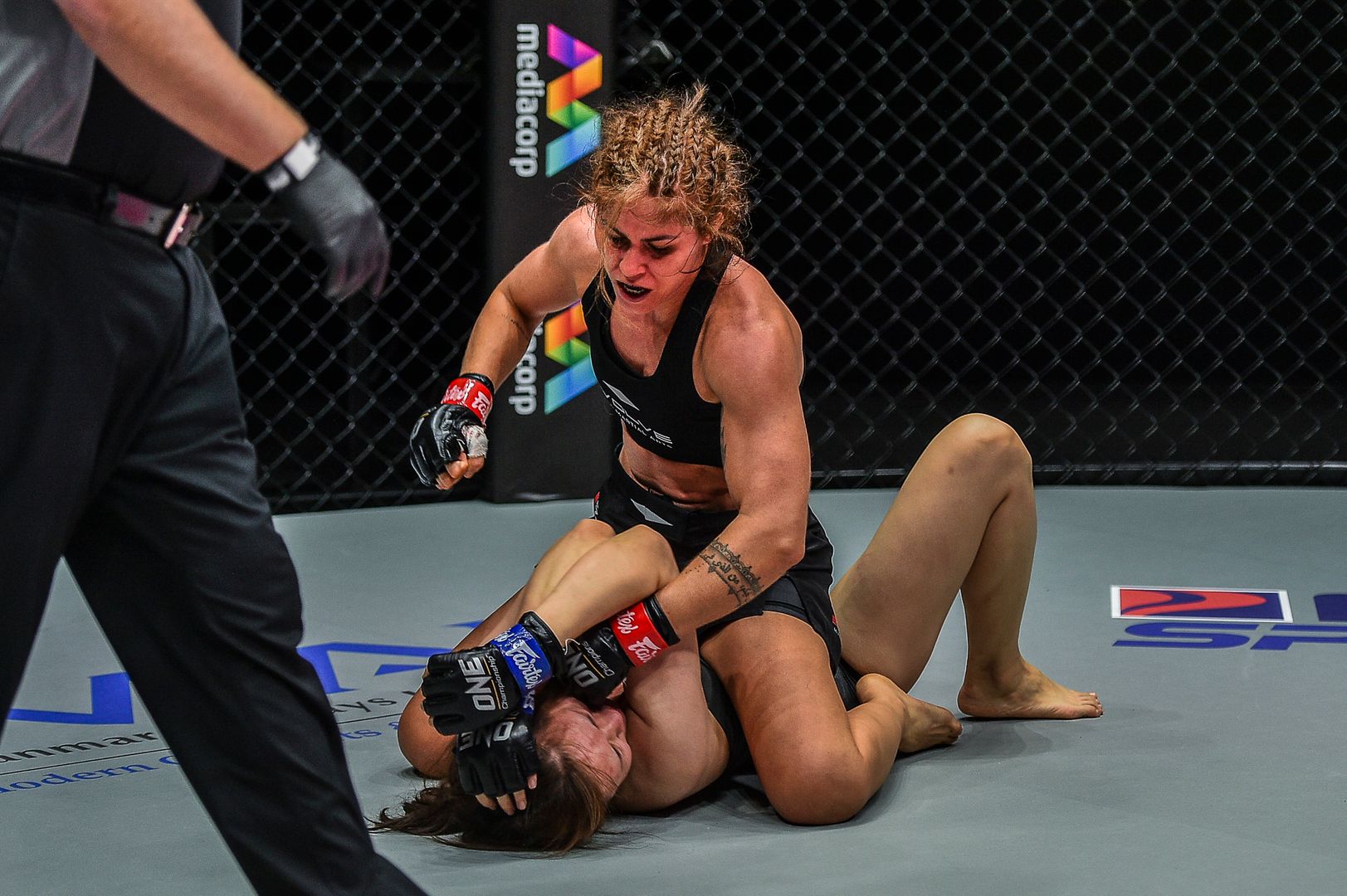 Ultimately, the Brazilian will use her strengths to aim for the finish – no matter where the fight ends up.

“I would like to score a knockout or a ground-and-pound [TKO] on the floor in the second round,” she adds.

If the Evolve representative indeed scores her second straight win in ONE, she’ll not only secure her spot in the strawweight rankings, but she might receive a rematch against #4-ranked Ayaka Miura, who handed Mazar her debut loss. If not, the Brazilian would likely face another one of the division’s elite contenders.

For Mazar, those opportunities would be the perfect next step on her journey to the top – one she hopes will move quickly.

“I’ve been doing this all my life, before coming to ONE Championship and to Evolve. I didn’t have many good opportunities in Brazil. Now is the time to [live] my dream, and show the world and show people that big dreams can become real if we work hard and if we keep believing.

When it comes to her ultimate goal, Mazar just doesn’t want to become a ONE World Champion for the sake of wearing the gold. Reaching the pinnacle of mixed martial arts would also show that her sacrifices and hard work have been worth the effort.

“Of course, the belt is really beautiful. I want this belt. But this is not the point,” she says.

“The most important thing is to prove to myself, my family, and the people that work hard with me – because many people have helped me here in Singapore – that we can do this.”