Gina “Conviction” Iniong feels confident in her skills. Now, the Team Lakay standout will get a chance to display those skills on the biggest stage possible.

The Baguio City, Philippines native will make her ONE Championship debut on Friday Night, 21 April, against fellow Filipino “The Kilapino” Natalie Gonzales Hills in an atomweight clash at ONE: KINGS OF DESTINY. The event takes place on neutral ground at the Mall Of Asia Arena in Manila.

“There is a lot of pressure, especially because this is my debut in ONE Championship,” the 27-year-old says. “That is normal in every fight. All I want is to win.”

Despite the pressure, she is inspired to make a statement inside the ONE cage and in front of her hometown crowd, especially her family, who previously did not know about her MMA career.

“I am so excited to fight, especially because this is my debut and I want it to be momentous. Not just for myself, but because I know lot of fans will watch and support me in the Mall of Asia,” says Iniong.

Iniong, who trains under the guidance of Team Lakay head coach Mark Sangiao, currently holds a professional record of 4-2, with two of those wins coming by submission and another one by TKO. Most famously, she defeated former ONE Women’s Atomweight World Title challenger Mei Yamaguchi three years ago via split decision.

Now, she hopes to translate that success into the ONE cage and forge her way towards a title shot, but first, she must get through “The Kilapino.”

In her last outing, she faced Iniong’s teammate April Osenio at ONE: GLOBAL RIVALS in April 2016, and lost in the first round via armbar. This gives “Conviction” that much more motivation, as she knows her teammate has already beaten her foe.

“All I know about Natalie (Gonzales Hills) is that she is striker,” Iniong explains. “I know she will prepare for this fight, especially because she lost to my teammate April Osenio.”

“Conviction” and Osenio see each other daily at Lakay Central Gym in Baguio City, and they not only prepare physically for the contest, but also mentally.

“She (Osenio) always tells me that I can do it, because ‘she already lost to me,’” says Iniong, recalling a conversation with Osenio. “She also partners with me in my daily training, like sparring and grappling.”

As Iniong gets set to step inside the ONE cage for the very first time, she has a clear vision in her mind. She knows she will be locked inside the steel structure alongside Hills, a fierce warrior eager to get her career back on track, but she also knows what she has to do to get the job done.

“I will try to finish my fight in with a first-round knockout or submission.” 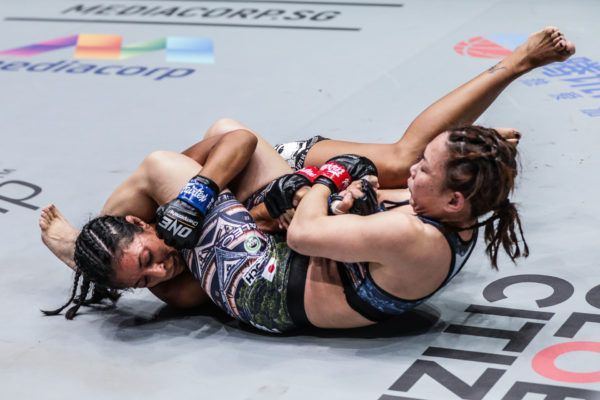