When Garry “The Lion Killer” Tonon stepped into the ring to face Yoshiki Nakahara at ONE: ENTER THE DRAGON, he was supposed to face the toughest test of his mixed martial arts career.

However, 55 seconds later, the bout was over after Tonon slapped on one of his signature heel hook submissions and forced the Japanese veteran to tap out.

That took Tonon’s perfect record to 5-0 – with all five wins by way of TKO or submission – and in his post-bout interview, he declared that he had officially graduated from a prospect to a contender.

After he entered ONE Championship as a decorated grappler, Tonon has shown an incredible rate of development throughout his first year in the Circle, and now he hopes to begin his pursuit of the ONE Featherweight World Championship.

Following another incredible performance, Tonon breaks down what will come next for him, and how he thinks he might fare right now if he was matched up with his division’s top dog.

ONE Championship: Would you still say this was the biggest challenge of your career, even if you ended it in 55 seconds?

Garry Tonon: In many ways it was. Maybe not the actual fight itself, but the preparation, the level of opponent – everything like that.

You’ve got to treat every single one of these things like it’s very serious business and, if anything, I treated it more serious than any of the previous [bouts]. What you saw out there was just a product of that dedication to preparation leading up to the fight.

ONE: You have always been able to critique your performances no matter how it plays out, but is it hard to find fault in this one?

GT: I went in there this fight with something that I hadn’t done in any previous fights with three mental reminders. I have a theory that these are going to help me to stay mentally on track when I go out there.

[At John Danaher’s team], we want to make order out of chaos, so that was an attempt to do that. The first was to establish distance – one of the easiest markers to know in a fight if I’m doing that is if I can easily move a slight distance away from my opponent when he goes to throw a heavy strike, and I’m out of range.

That happened for a number of my opponent’s strikes. He threw a couple of heavy punches and they just barely missed me, and that’s perfect distancing. The closer they are to miss, the easier it is for you to counter them.

Distance is not enough, so the big second reminder was [to use] head movement to make it harder for my opponent to hit me.

While I was thinking about those two things, here’s where the critique comes in. I believe that there were a few times where I was standing a little too upright. I never want to stay too upright for too long because it makes it harder to apply my game. My game is to eventually take my opponent down and control, leading to submission or damage on the floor.

The third mental reminder is something I call crouch and counter. It’s something that Mike Tyson used to do with his standup. Somewhere in that third step, I didn’t feel as comfortable as I wanted to feel. If you watch [the bout], it looks good, but there were a few times I felt I was a little tall. Maybe I’m being very hypercritical, but I know I felt it out there. ONE: Ultimately, did the match play out the way you expected?

GT: A lot of people ask me if this was the game plan, and I would say it was one of the plans – somewhere around plan C.

When I picked up the single-leg, the general way he turned made me feel like it was appropriate to sit back on the leg. It’s something we train all the time, but it wasn’t like that was seared into my brain the moment I touched the leg.

His leg was on the outside my hip, and that’s a great place to start the ashi garami. Initially, it was a very strong resistance. He really tried to run away from the leg lock situation. As he started to run away, he hit the ropes, and he had nowhere else to go.

When he hit the ropes, something interesting happened. I started to enter into the submission, and I don’t know if he froze or he didn’t know what to do, but I started to apply tension to the lock. I anticipated a roll because usually, that’s not something you have to think about. Basically, I’m turning your leg a particular direction, and if you don’t move to follow it, then immediate damage occurs.

So that’s what I expected, but he didn’t move when I started to apply pressure. When I threw the second [leg] over to secure things because he wasn’t moving, by the time that leg came over I could feel it got worse and worse [for him] as it got tighter and tighter.

ONE: After the match, you said you are coming for the World Title. Could that be your next match?

GT: I don’t know. I heard mixed things, I heard some whispers that could potentially be my next fight, and I heard some other people say we’re going to give me one more.

Eventually, they’re going to have to give me that World Title shot. 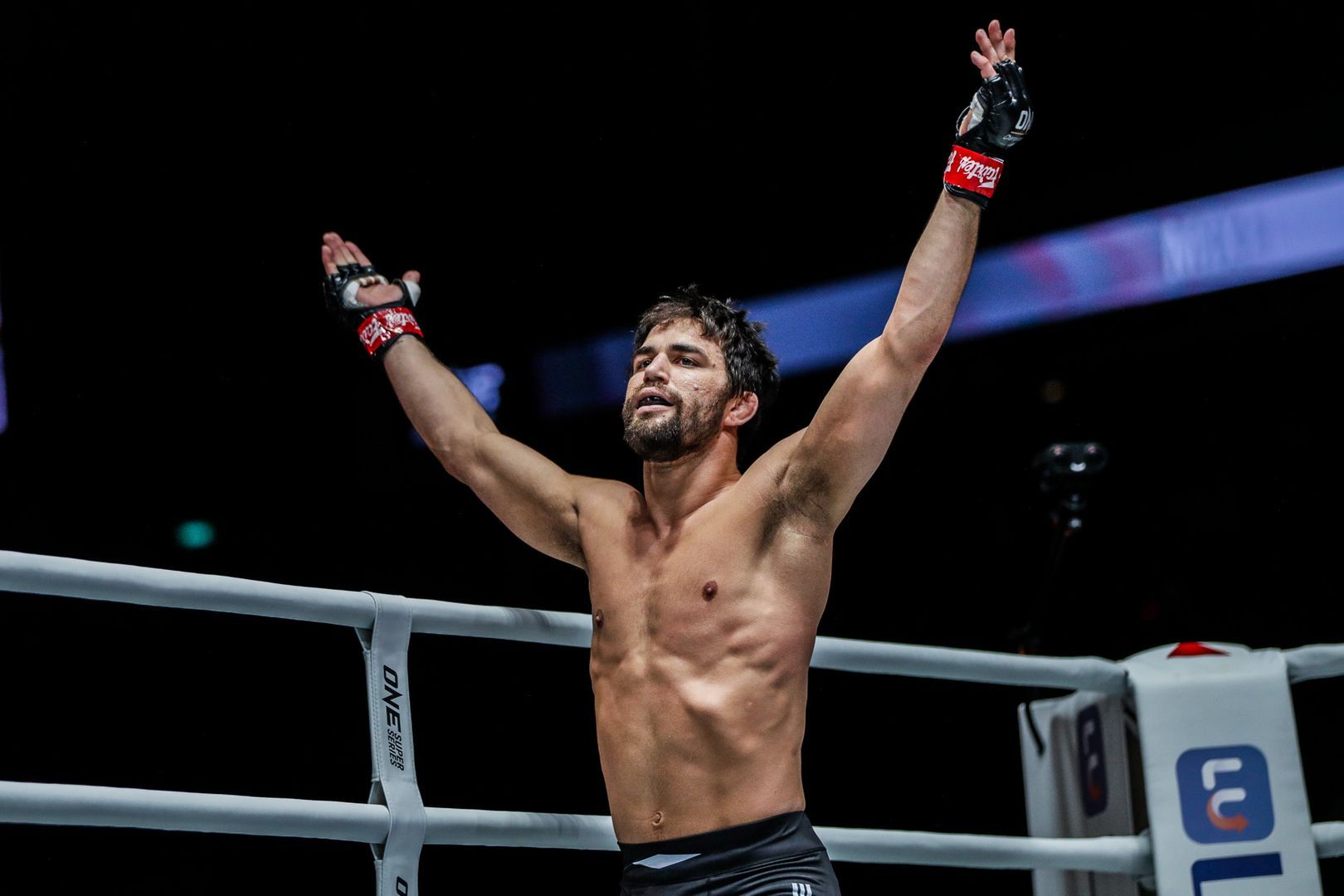 ONE: How do you like your chances against the current World Champion?

GT: I would feel very confident. When I look at him, I don’t see a specialist. I don’t see a Muay Thai expert or a jiu-jitsu expert. I see him having a good understanding of the skills it takes to be a mixed martial artist. That’s impressive in its own right.

It presents a very interesting challenge. When I look at his fights – and I do this with all of my opponents – he looks beatable to me. This looks like a challenge I could conquer, but it would be a very different kind of challenge I would say than all of my previous fights. He’s got a very good mix of skills.

ONE: By the end of 2019, could you be the ONE Featherweight World Champion?