The lead card for ONE 163: Akimoto vs. Petchtanong may have warmed up the crowd at the Singapore Indoor Stadium on Saturday, November 19, but the MMA fighters who competed on the main card undoubtedly brought the fire.

All four MMA bouts on the main card ended in highlight-reel fashion, including a trio of first-round knockouts and a dramatic late finish.

Take a quick look at all the MMA action that went down on the ONE 163 main card.

Aoki started the fight by teeing off with kicks to keep his 28-year-old foe at bay, but Izagakhmaev – the #4-ranked lightweight contender – relentlessly stalked the former ONE Lightweight World Champion.

Before long, Izagakhmaev managed to back up the Tokyo native to the Circle Wall and uncorked a huge right hand, dropping the 39-year-old veteran. The Dagestani rushed in and closed the show with ground-and-pound to earn the victory in just 86 seconds.

With the win, Izagakhmaev moved his record to 22-2 and may have just earned a crack at reigning two-division ONE World Champion Christian Lee‘s lightweight belt.

Aung La N Sang and Yushin Okami were both at an important career junction heading into ONE 163. The elite pair of middleweights were desperate to get back on the winning track and start a resurgence toward the top.

Ultimately, it was former two-division ONE World Champion Aung La N Sang who took the initiative, scoring a first-round TKO victory over his Japanese foe.

“Thunder” shot in for a takedown early, but Aung La N Sang sprawled well to take top position. When “The Burmese Python” got back up to his feet, Okami tried for a second time, only to meet an incoming kick from the Myanmar icon.

Aung La N Sang’s knee collided with the Japanese superstar’s chin, and the former two-division king took advantage of the situation with a barrage of ground-and-pound. Although Okami tried to hold on, the Myanmar icon’s relentless punches forced the referee to intervene and halt the contest at 1:42 of the opening stanza.

The Japanese knockout artist seemed to overwhelm Woo with his frenetic pace at the start of the 139-pound catchweight bout, but the South Korean MMA fighter wobbled him with a left hook midway through the opening frame, which instantly turned the tide.

Woo followed “Little Piranha” around the Circle, throwing punch after punch in an effort to close the show. Wakamatsu dove for a desperate takedown, but the “Dynamic” 30-year-old stopped it, immediately secured the mount, and rained down punches until the referee waved off the action at the 2:46 mark.

That TKO victory moved the South Korean’s record to 10-3 and may have landed him a spot in the top-five rankings.

“Pretty Boy” Kwon Won Il has earned highlight-reel knockouts in each of his wins on the global stage, and that incredible streak continued against Mark “Tyson” Abelardo in the first contest of the night’s main card.

Abelardo minimized the obvious reach advantage by walking straight down the center and unloading quick left hooks and overhand rights. But after absorbing tons of damage, the #4-ranked bantamweight started to work behind his jab to counter “Tyson’s” heavy artillery. He intelligently used his lead hand to gauge the distance and struck with straight rights and uppercuts.

“Pretty Boy” continued where he had left off in the second round, and his pressure made it hard for Abelardo to move forward and land anything significant. When the Kiwi-Filipino decided to switch levels, Kwon stayed heavy to prevent Abelardo from taking the action to the canvas.

Abelardo refused to give up, though. He took his rival to the mat early in round three, but the Extreme Combat and Top Gym BF athlete once again returned to the feet. From there, the 27-year-old Korean peppered Abelardo with teasing jabs and straight rights, and when the latter decided to shoot for another takedown, Kwon countered with a knee that grazed his foe’s temple.

With “Tyson” turtled up on the canvas, Kwon followed up with a final salvo of shots to seal the deal and force referee Olivier Coste to halt the contest at 3:45 of the third frame. That TKO win elevated his record to 12-4. 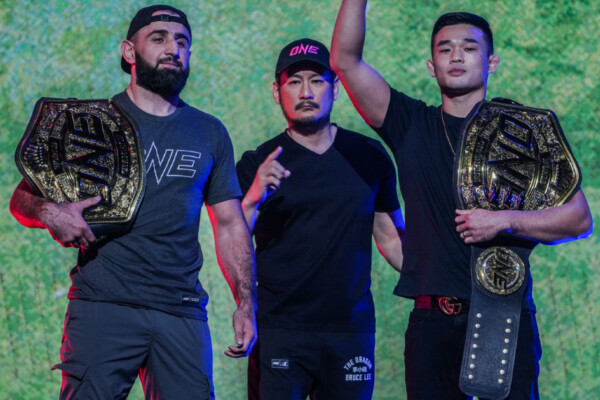