Alma Juniku is promising an even more explosive performance on her return to the Circle against Anne “Ninja Line” Line Hogstad next Friday, 8 November at ONE: MASTERS OF FATE.

The 18-year-old made a big impact and became an instant fan-favorite in her ONE Super Series debut in June when she pushed Stamp Fairtex for five rounds.

The Australian sensation gave the World Champion all she could handle in the clinch and showed off some dangerous boxing skills as she came within a whisker of claiming a shocking upset, as well as the ONE Atomweight Muay Thai World Title. 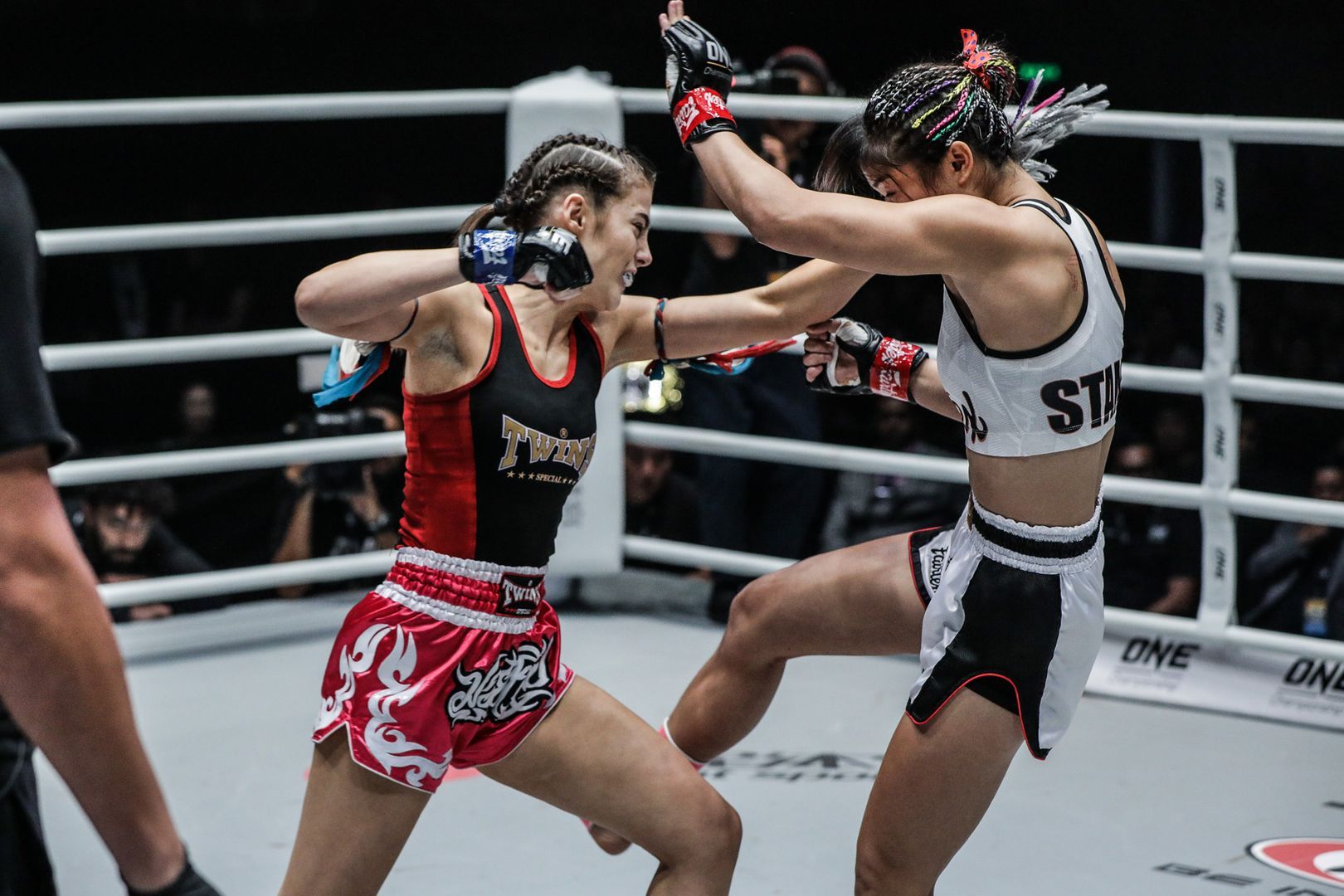 The WBC and IPCC Muay Thai World Champion emerged from that encounter with her head held high, but this time she is determined to take a win back to Logan City. Now she has got her feet wet in The Home Of Martial Arts, she is certain she can improve on her impressive maiden performance on the global stage.

Ahead of her battle at the Mall Of Asia Arena in Manila, Philippines, Juniku reveals the lessons she learned from her match-up with Stamp, and how she will bring them to bear to put on a show and take out Hogstad.

ONE Championship: Do you think fans will be expecting a lot from you after your great match with Stamp?

Alma Juniku: Before I got matched with Stamp, I know a lot of people were doubting me because she’s got such a big name in her sport.

I feel like it was close but it could have gone either way, so I wasn’t really annoyed about it, I know there’ll always be the chance for a rematch. It was a really good fight.

What pushed me was a lot of people doubted me, so I came out strong. I feel like I will definitely be stronger for the next one because I’ve learned a lot from that fight.

ONE: How much does a second shot at the World Title motivate you?

AJ: I would just focus on what I have now. I would like a rematch in the future for the World Championship, but right now, I’m just focusing on what is in front of me, and putting in a good performance.

ONE: What lessons did you take away that you can bring to Manila?

AJ: I felt like I didn’t really kick enough. I know I can do well with my hands, so in this fight, I will be throwing everything.

ONE: What did you think of Hogstad when you checked out her previous bouts?

AJ: It’s hard to tell because she’s been fighting for a while. I’ve seen some of her old videos, so I wouldn’t want to judge her from that, but from the most recent one I saw, about a year ago, I think she’s not a bad fighter.

I don’t underestimate her, or anyone, because they could be capable of anything.

ONE: Did it give you any clues as to what you will have to do to prepare to face her?

AJ: I think I’ve just got to make sure I’m fit so I can match her fitness because she’s got a good work-rate.

She seems like she’s got good strength too, so I’ve got to be careful, and make sure I’ve got my hands up! 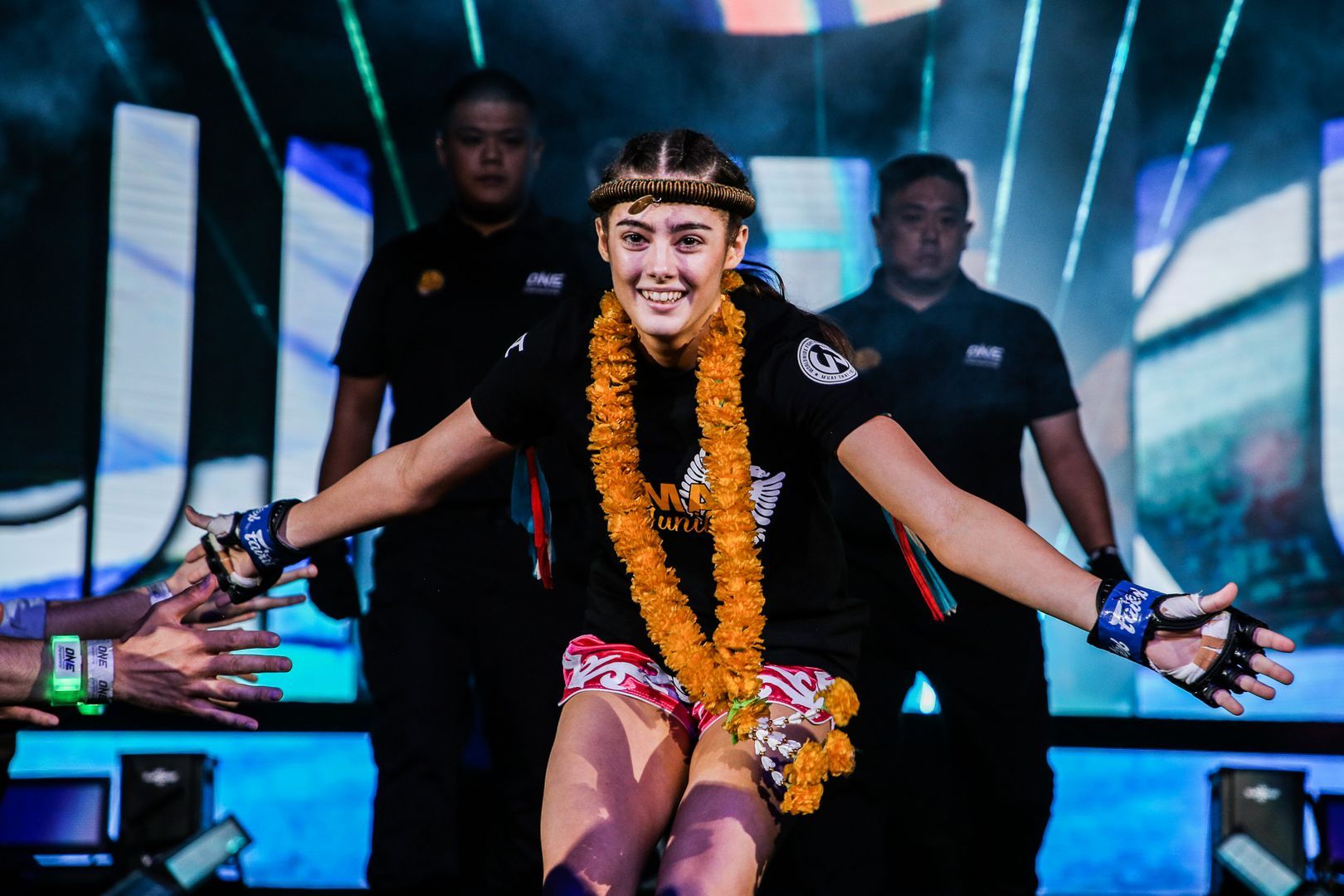 ONE: Do you think you will use the clinch after you had so much success with it against Stamp?

AJ: I feel like when I fought Stamp, there was a specific game-plan. In the clinch, instead of standing straight in front of her, I stood off to the side so she couldn’t use her strength. I’ve been working on my clinch so I have definitely improved in that sense.

If we fight and it’s mainly more of a kickboxing match, it doesn’t really affect me, I am happy to adjust and fight her either way. I take it as it comes, but for this one, I will come off a lot stronger.

I feel like I did well in my last fight, but for this one, I want to impress everyone even more and come in even harder.

ONE: Do you feel more relaxed now you have some experience on the global stage?

I think because of my last fight against the World Champion, and putting on a good performance like that, people should tune in to this one to see what I’ve got now because I’ve definitely improved since then.

ONE: What result do you expect in the Philippines?

AJ: I would definitely love to get a knockout or a TKO, but if not, I just know it will be a good, hard fight. I do not underestimate my opponents. 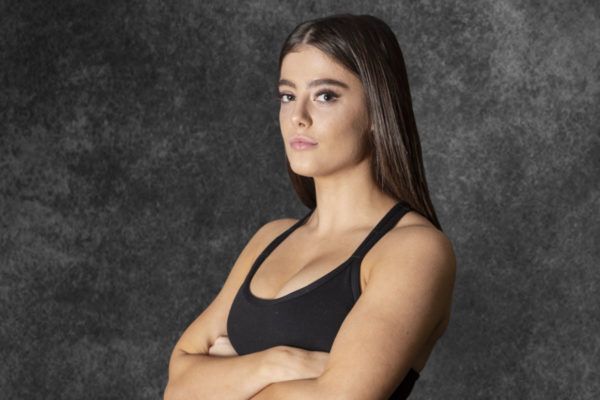 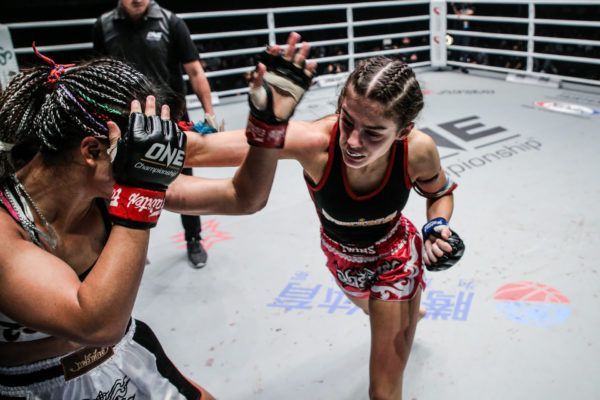