Shuya Kamikubo is part of a new generation of Japanese mixed martial artists who have classic roots.

The 25-year-old athlete, who was nicknamed “Stealth” by his coach and cornerman Gen Isono because he is a man of few words, comes from a traditional judo background and is armed with a brown belt in Brazilian Jiu-Jitsu.

That devastating grappling blend has led the Yokohama native to an astonishing 11-1-1 professional record and catapulted him into the upper echelon of ONE Championship’s stacked bantamweight division.

As he continues improving his skills at TRY H Studio and Itadaki Jiu-Jitsu ahead of his inevitable return, take this opportunity to learn more about the road that led Kamikubo to The Home Of Martial Arts.

Kamikubo, who was raised by his loving mother and father in Yokohama, Japan, was the middle child of his family. He had a sister who was 12 years older than him and a brother who was two years younger.

The bantamweight contender was a lively child who often played with his friends in their neighborhood, and while he was not too sure about a future career, he studied earnestly knowing that a proper education would provide him with more options.

Soon, however, martial arts would enter the mix.

Kamikubo did karate for a year in elementary school, but he became more attracted to judo after Japanese athlete Kosei Inoue won a gold medal at the 2000 Summer Olympic Games in Sydney, Australia.

The Yokohama native quickly joined the judo club in junior high school, practiced six days a week, and regularly competed on the weekends. He enjoyed the tough competition without particularly worrying about winning or losing.

As a matter of fact, he loved the sport so much that he joined a judojo outside of school, trained there three times a week, and thrived alongside his peers.

“Training was just a normal part of life,” he offers. “I liked the throws and the ground techniques.”

Kamikubo went on to study Japanese Literature at Nihon University in Tokyo. The college is known for its formidable judo club, which he joined immediately.

In his freshman year, however, “Stealth” reached the turning point in his martial arts journey.

He had been doing BJJ at Honey Trap gym (now Try H Studio) in the Shinjuku area of Tokyo, and his love for “the gentle art” was taking over his competitive heart. Also, in his first semester, he accepted an amateur mixed martial arts bout and won the contest.

Because of those factors, he left the university judo club in order to focus more on the intricacies of grappling. 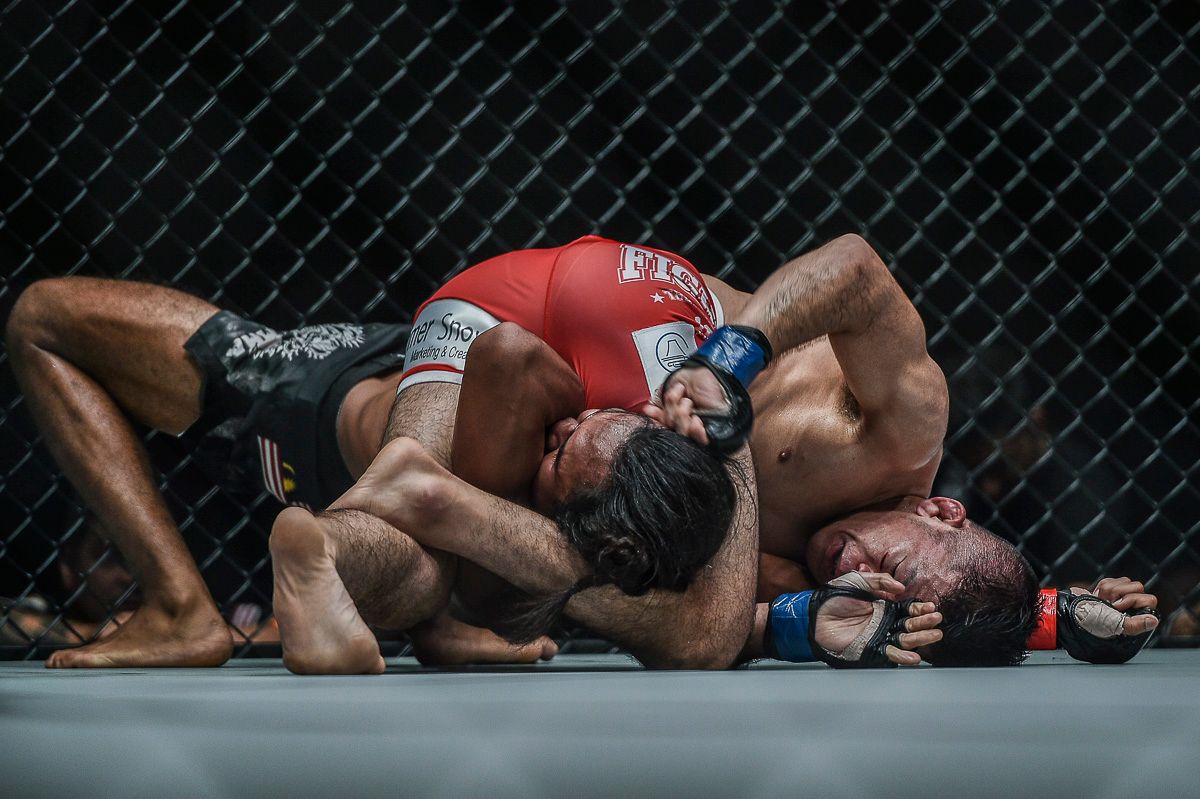 “Stealth” made an impressive pro debut in September 2014 by earning a submission victory in less than three minutes. He won five of his next bouts and became the DEEP Future King 2014 Tournament Champion, all while juggling his college responsibilities.

After graduating with his degree in 2016, Kamikubo wasted no time chasing his martial arts dream. He took building maintenance work and various manual labor jobs in order to support his training lifestyle.

However, disaster struck during a training session later in the year. He injured his neck, which instantly put him on the shelf.

The first stage of his recovery was brutal, as the pain affected even his sleep. Initially, he did not think he could return to mixed martial arts, but the fire was not out. He was determined to move forward, pain-free.

“After three or four months, once I was able to move a bit, I started jiu-jitsu again – doing drills with no sparring,” he explains. “From there, I got my fitness back bit-by-bit. I thought that even if I couldn’t do mixed martial arts again, I’d continue doing jiu-jitsu.”

Through passion and dedication, he made a stronger-than-ever comeback in both mixed martial arts and jiu-jitsu competitions.

Kamikubo earned a unanimous decision victory at the Tribe Tokyo Fight Challenge in October 2017 and scored a silver medal in the 2018 All Japan Brazilian Jiu-Jitsu Championship.

Not only was “Stealth” back, but he was better than ever.

The Call To The Global Stage

Kamikubo received an offer to make his promotional debut at ONE: BATTLE FOR THE HEAVENS in Guangzhou, China in July 2018.

Although it was a short-notice bout, he accepted the match without any hesitation.

“It was surprisingly sudden. I had less than four weeks to prepare, but I had another fight overseas which got canceled, so the timing was right,” he explains.

“It had been a while since my last match, but I remember Tatsumitsu Wada was on the same card, so I felt a good connection.”

And, connect he did.

He wowed the fans inside the Guangzhou Tianhe Gymnasium with ferocious punches to defeat WKF Indonesia Champion “The Terminator” Sunoto via second-round TKO.

The Yokohama warrior feels his athletic evolution is the product of his constant training and learning, and he showed this to the world in his most recent victory over the Brazilian in November 2019.

“Most recently, when I faced Bruno Pucci, I was able to use all of my tools and what I’d done in training,” he says. “During the match, I was able to keep calm and adjust as necessary.” 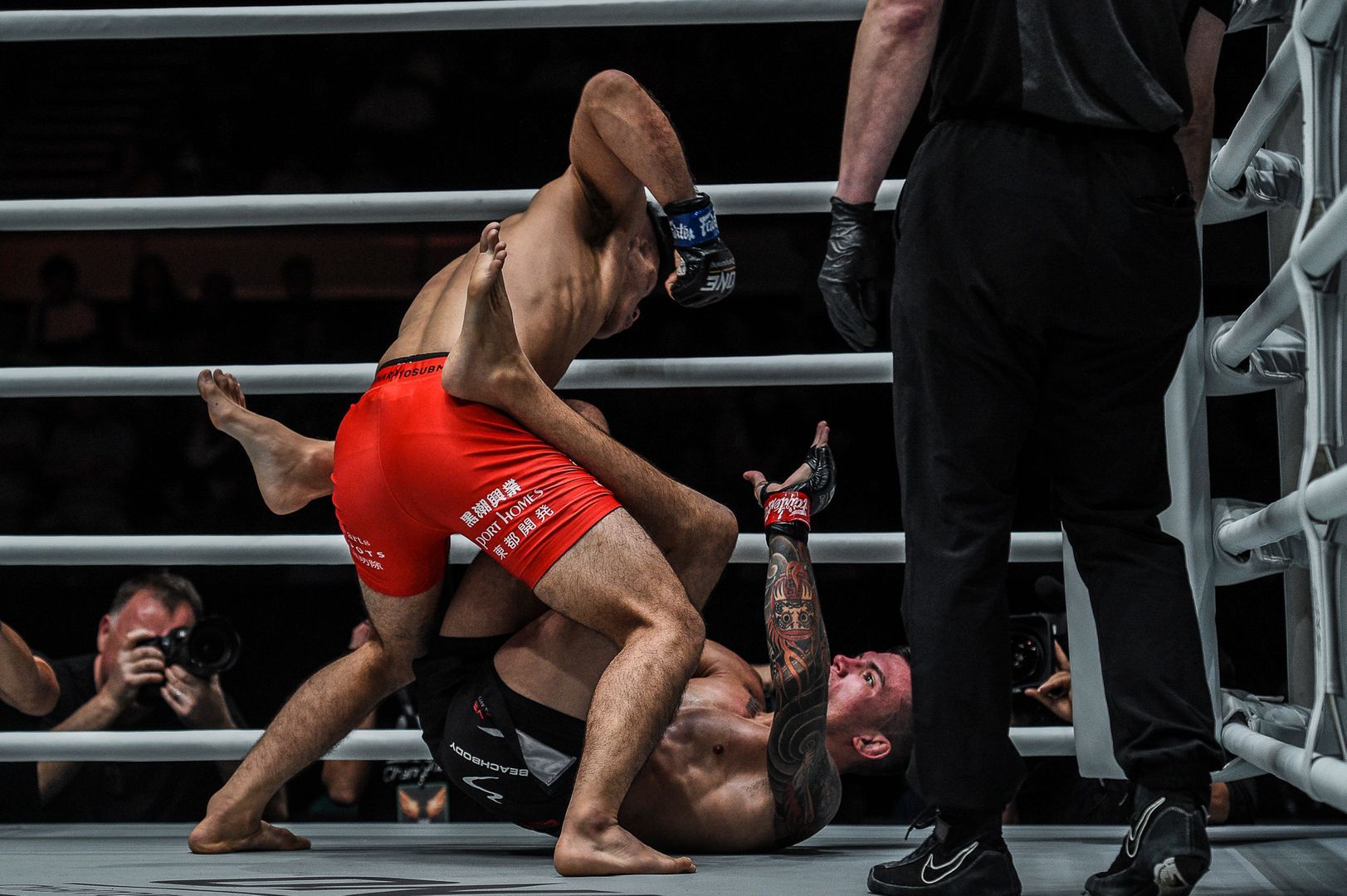 Kamikubo’s mixed martial arts style is rooted in judo, but he has his own, unique contemporary flavor.

The athlete’s dangerous hands, crushing attacks, immense pressure, and shut-down tactics are daunting for the world’s elite bantamweights. He plans to apply this trademark style every time he steps into the Circle and force his adversaries to quit.

“I’m always training to increase my skills whether I have a match lined up or not. I think most fans like the Muay Thai guys and strikers in ONE. I can strike, but my style is grappling and jiu-jitsu,” he says.

“I want to show how natural my grappling is. It’s not just about going for the submission finish, it’s about making your opponent give up. I always fight to overwhelm my opponents, and I want to be that guy who makes them feel that they don’t want to fight me.”

Now riding a seven-bout winning streak, with four consecutive victories in the world’s largest martial arts organization, Kamikubo is willing to face anyone who brings him one step closer to a shot at the ONE Bantamweight World Championship.

“There’s no one, in particular, I’d like to face, but if it’s someone strong, I’ll get fired up for it. Maybe someone like Yusup Saadulaev, who has also beaten Dae Hwan Kim,” he offers.

“I don’t know who is going to challenge [the champion] Bibiano Fernandes next, but anyone up there in that mix would be good.”

Should “Stealth” continue with his dominant performances, then it will only be a matter of time before he secures his highly desired match with the bantamweight king.